Last week, EA’s Patrick Söderlund posted a status update on the company’s next Star Wars game. The upshot of the update was that they’re substantially overhauling the game based on feedback they got from beta testers, and this will delay the game’s launch from the originally scheduled late 2019 date. Two days later, Mike Krahulik and Jerry Holkins used their Penny Arcade comic to react to the announcement… 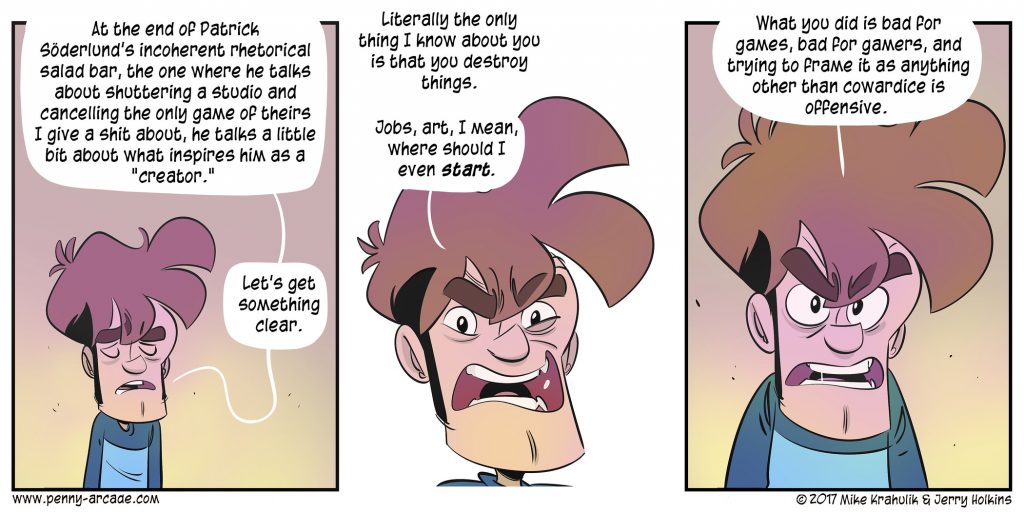 On Twitter, Holkins linked to Söderlund’s statement, then the comic, and added “sorry no punch line this time. It’s just true.”

Penny Arcade, if you don’t know, is very much a comic centered around video games and gamers. So that the comic itself makes little sense without a fair amount of context isn’t wholly unexpected. However, what’s problematic is the unhealthily high level of entitlement on display. They’re taking offense from a video game that wasn’t supposed to be out for two years that will now take a bit longer. It’s not that the game is being canceled, just not going to be on the market later than when it was originally announced.

If you have a product you think won’t sell, it’s a simple business decision to try to revamp it before launch. Even if you assume Söderlund lied in his statement about the beta testing, or that the tests were somehow flawed, they still came to a decision that more time needs to be spent on the game to make it sale-able. So how is this level of outrage justifiable? How entitled to do you have to be to take this level of a visceral reaction about a game delay? Again, not a cancellation—a delay.

I’m not a gamer myself; I don’t know Söderlund and/or his reputation. I can see a justification for outrage if he has a long-standing habit of shuttering studios like the one that was originally working on this game. It suggests a cynical approach to game development, and puts talented, hard-working people in the unemployment line. But that’s not the focus here. The strip does refer the loss of jobs (twice, even!) but immediately follows those up with an ego-based concern: “the only game of theirs I give a shit about” and “art.” The jobs angle is dismissed with literally the very next words after it’s referenced, and the final summation in panel three drops it entirely to focus on gamers themselves.

Part of the point of webcomics is to be able to visually represent your point of view as a creator. And it’s understandable to be disappointed that a date you’re waiting for is pushed out further than you anticipated. But if your level of anger rises to this level long enough to create a comic about it, I might suggest that you’re part of the problem. People don’t want to be on the receiving end of this type of “criticism.” So if you, as a webcomic creator (particularly a well-known one), espouse that and, by extension, encourage that in others, you discourage the creative people from wanting to enter the business. The people who love the medium and the format of, in this case, gaming don’t want to stain their enjoyment with this kind of bile. And so they look for some other profession, and leave gaming to the cynics and bean counters who don’t give a rat’s ass what you think as long as you keep shelling out money for their product. And because their hearts aren’t in it, you’re going to wind up with crappy games. And the bile spewed out in reaction to that is just going to run through the cycle again.

My point is: if you’ve got a webcomic, that means you have a platform and an audience. Don’t use that to seed hate and disgust for something as petty and entitled as whether or not you get “your” video game on time.