Last year, Netflix dropped the Wet Hot American Summer: First Day of Camp miniseries, the follow-up to the original cult classic film. While we’ll also get Wet Hot American Summer: Ten Years Later on the streaming service this summer, at the end of the day, who can get enough of All Things Camp Firewood? The folks at The Devastator, the critically-acclaimed humor publisher, have heard your cries.

Just a week ago, The Devastator launched a Kickstarter for Wet Hot American Summer: Fantasy Camp, an RPG based on the popular Wet Hot universe first created by director David Wain, who has given the campaign his blessing. And today, the campaign has some hot news. The Devastator has announced that the Kickstarter has met its funding goal and is announced its first stretch goal:

$15,000 – Get McKinley Played – We’ll double the number of pre-made characters in the Fantasy Camp manual from 15 to 30! While the manual includes Firewood All-Stars like Coop, Katie, Beth and Gene, we’ll make sure beloved campers like McKinley, Lindsay, and Can of Mixed Vegetables don’t get left out in the cold.

Who wouldn’t want to play as McKinley, Lindsay, or the Can of Mixed Vegetables? Come on, folks, let’s make this happen!

Excited yet? Want to learn more? We caught up with Geoffrey Golden and Lee Keeler, the creators of Fantasy Camp, about the genesis of the Kickstarter, the process of translating the movie to an RPG, and which members of the original Wet Hot team pitched in to help add to the Fantasy Camp experience.

FreakSugar: First, I love Wet Hot American Summer, but it never occurred to me that it would be a candidate for an RPG. (That said, I really hope the Kickstarter does well!)

Geoffrey Golden: Thanks, we hope the Kickstarter does well, too. We’re hoping for somewhere between $1-$3 billion. Fingers crossed!

Lee Keeler: And toes! Although I am willing to settle for half a billion.

FS: Did you have a specific moment where you thought it would make sense to pair the two?

GG: Lee had a moment of inspiration while drunk and high at Disneyland.

LK: I mean, I was half drunk, half high, but yeah, totally. We were just sitting around getting out of the heat in this weird hotel bar. I brought up how strange it was that Devastator had already made an RPG called Rise of the Axeholes and how they’d also worked with Joe Lo Truglio, yet we didn’t have some kind of RPG for Wet Hot. Those characters are crazy ideal for that type of game. 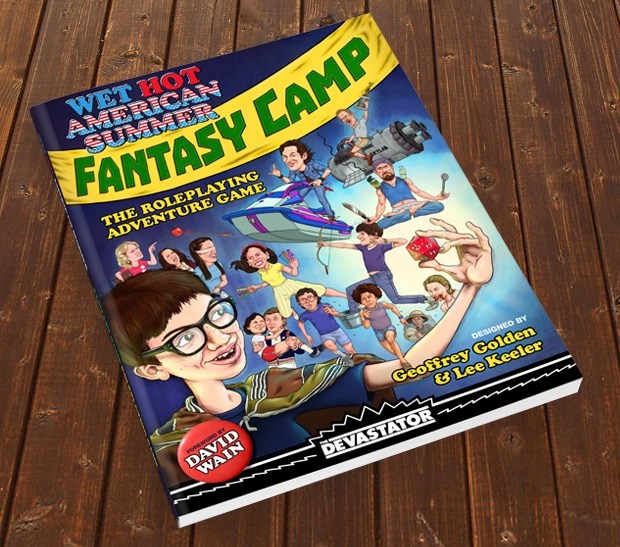 FS: What kind of planning does it take to construct an RPG like this? Are there elements that you had envisioned from the beginning that you decided you definitely wanted included in the game?

GG: Our process was very iterative. You come up with ideas for gameplay, try them out with a play test group, throw half of your ideas out, replace them with new ones, and you keep going until you have a game people love and are not confused by.

LK: Honestly, this is where Geoffrey was very much behind the wheel. I’ve played RPGs like the old Star Wars and Marvel Heroes games, but I’m lucky to have had a partner who has executed the mechanics on a game like this before. What made this fun to work on between the playtests was slowly integrating those party-game elements that made this a new kind of beast.

FS: What was the pitch process like to get the creators of Wet Hot American Summer to give you their seal of approval?

LK: After The Devastator agreed to put it together, Geoffrey assembled a fantastic pitch package for me to send along to David Wain. One of the biggest joys of 2016 was finding out the Wain not only was down for the idea, but passed it along to the other producers and licensing folks pretty quickly. 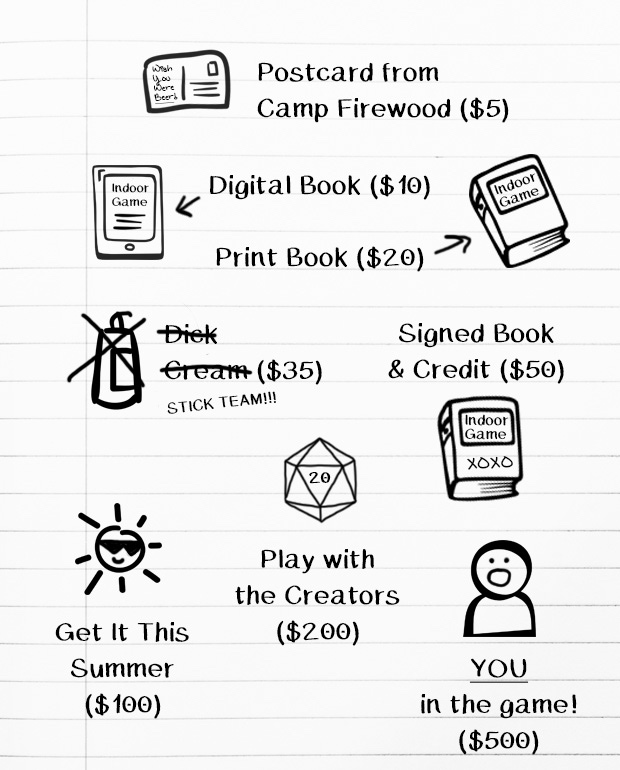 Sample page from the RPG!

FS: What kind of research is involved in crafting a game like this, aside from watching the film and the miniseries?

GG: We’ve both played a lot of tabletop games, but reading the actual manuals from cover to cover was super important. There are mechanics you can steal… er, pay homage to? Also, watching films that inspired Wet Hot (ex. Meatballs, Gorp), and talking about our own real life camp experiences.

FS: I know you’ve been test playing the game. What have you learned from that game play about what elements you want to keep, which to cut, and which to modify?

GG: Cut as much math as possible. Modify the character sheets to make them simpler. Keep and expand on elements where players are in-character. The most entertaining parts of the game are watching players butt heads, or smoosh faces, as their crazy characters.

FS: What can you tease about some of the aspects of game play we can expect to see in Wet Hot American Summer: Fantasy Camp?

LK: In the module based upon the last day of camp – which has storylines flying through the air, we found that the three most prevalent aspects included getting laid, becoming a hero, or evolving into some kind of superstar. You aren’t bound to those paths, but we found those to be the most fun when first getting used to Fantasy Camp and are surrounded by folks who fondle their sweaters or fondue their cheddars.

FS: The description of the game also seems very user-friendly to folks who don’t necessarily play a lot of RPGs. Was that part of your mission statement for the game from the beginning?

GG: 1000%. Wait, is that percentage possible? I’m no Associate Professor Newman. But yeah, we wanted the gameplay experience to be as hilarious, freewheeling and loony as the film, which meant making it easy to play so players can concentrate on the story and having fun.

FS: Do you have any tips for folks who want to have the optimal game playing experience from Fantasy Camp? Group size? Level of familiarity with the movie and miniseries?

LK: Oh, the optimal group is anywhere from four to six players, with the most efficient and/or controlling member of that group pulling the strings as Camp Director. Yes, it definitely helps to have, at the very least, seen the original movie. But even if you only have a passing knowledge of the events in WHAS and have only watched those weird highlight clips on YouTube, you can still assemble a cool adventure with somebody popping an awkward boner no problemo.

FS: Just a note: Thank you all for doing this Kickstarter. I adore the Wet Hot American Summer universe and I’m glad to see it getting some more much-deserved love.

GG: Our pleasure! We love the film so much. There’s actually a framed sock on our office wall signed by the cast. That’s how much we love Wet Hot American Summer – we acquire and frame socks.

LK: Also, we made a crazy roleplaying game.

As mentioned above, The Wet Hot American Summer: Fantasy Camp Kickstarter has 22 days left and has met its funding goal, with a tail-kicking stretch goal already on deck. Let’s make this happen, folks! Head over to the Kickstarter and throw in whatever you can. McKinley, Lindsay, and the Can are counting on you!