Z2 Comics’ Allen: Son of Hellcock #1, in stores tomorrow, is one of the most hilarious starts to new comic book series I’ve run across this year, and with 2015’s field filled with such books as Jem and the Holograms and Welcome to Showside (another Z2 book!), that’s saying something. And, really, it should be no surprise, as Allen‘s writers and creators Will Tracy (Last Week Tonight with John Oliver) and Gabe Koplowitz (VH1) come from a long career of delivering the funny uproariously and consistently.

I recently spoke with Mr. Tracy and Mr. Koplowitz about the genesis of Allen, why Z2 Comics is a great fit for the title, and how their television work informs their work on Allen. 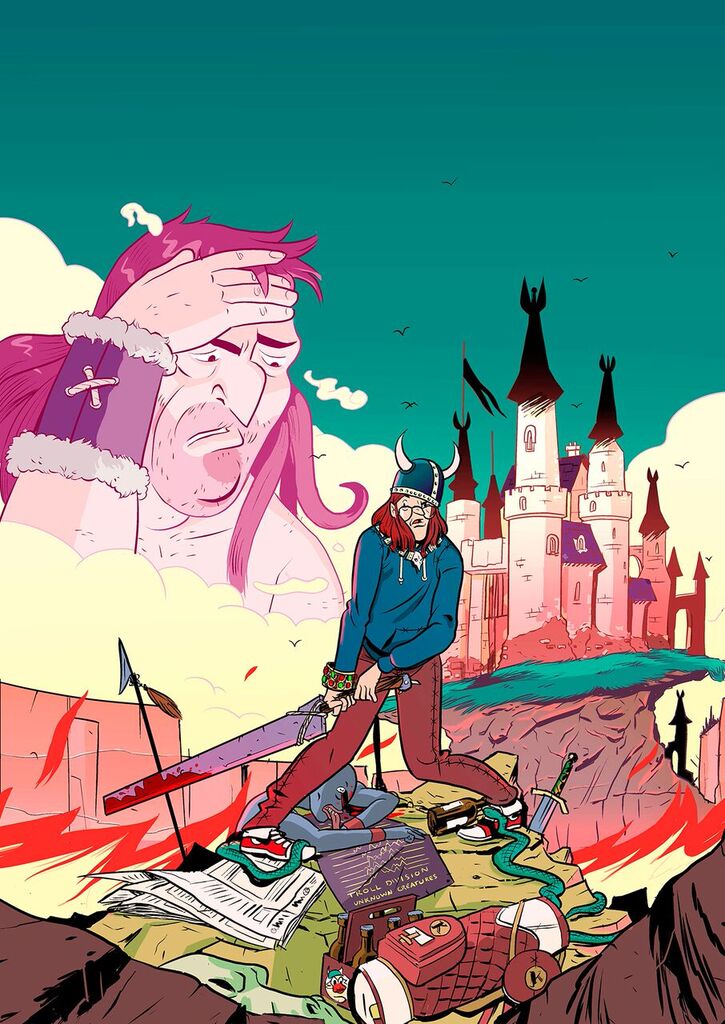 FreakSugar: What was it about the story of Allen: Son of Hellcock that screamed to you that it had to be told, given the work you both do in television?

Gabe Koplowitz: Honestly, it just made us laugh. A lot. As we developed the story over weeks and months and years, we never got tired of Allen and his story. He’s a lovable loser and the people must know his tale! Also, The Dark Lord Grangthyl commanded it.

Will Tracy: Oh, Dark Lord Grangthyl, he who is without virtue! Bewitch our feeble minds with your magick most insidious, so that our comick book might exceed our publisher’s sales projections, thereby producing sufficient royalties on yonder back-end!

FS: How far back does the idea for Allen reach back? What was the genesis for the story?

GK: It started with the name – Allen, Son of Hellcock. It’s all right there – the juxtaposition of a stereotypical hunky barbarian and a regular, ennui-ridden young man (we started writing this not long after graduating college) who’s just trying to find his place. We’re equally big fans of Adrian Tomine and Roy Thomas, so mashing those two worlds up was the obvious move. We’ve been working on the comic, in one form or another and with numerous breaks, for seven or eight years.

WT: Having Hellcock in our pocket — an unfortunate choice of words, I realize — for as long as we did ended up being a blessing in disguise, as it meant we were able to patiently wait for the right circumstances, the right publisher, and the right artist to line up at the exact right time. Seven or eight years is a long time to wait, especially when you are unable to remember or decide if it is seven years or eight years that you’ve been waiting.

FS: How would you describe Allen to readers deciding to try out the comic?

WT: It’s a comic book, first and foremost, and we want to emphasize that because so much of the fun of the book is how it plays with comics cliches — great cliches, mind you — and pays homage to our favorite comic books and the worlds they created. It is also a comedy that reflects our shared, absurdist sense of humor. And lastly it is, thanks to Miguel Porto, a beautiful piece of art to look at it and get lost in. Young adults can read it and enjoy it. Old adults can read it and enjoy it. Iguana adults cannot read, but they may find the colors in the book distracting nevertheless.

FS: Are you fans of the fantasy medium? I ask that because, while you’re poking fun at the tropes of fantasy, the story also seems to have a respect for it.

GK: Big fans. I hesitate to call ASoH a parody, because we have a deep love and appreciation for the fantasy genre. I once read an interview with Edgar Wright (director of Shaun of the Dead and Hot Fuzz), who said that he approached his genre comedies more as “homages” than “parodies”. We like to think of ASoH the same way – we set out to tell a really fun, adventurous fantasy tale that just happens to be hilarious too. We failed miserably, of course, but what can you do?

WT: I’ll answer Gabe’s question: There is nothing you can do, other than apologize profusely to your friends and family, burn all known copies of the book, and retreat to a small alpaca farm outside Ames, Iowa. Which is what we’ve done, and I have to say, I have never smelled so strongly of alpaca shit.

FS: Given your respective backgrounds in television, how have those writing sensibilities that work in that medium translate to writing comic books?

WT: Given that we started work on the comic long before either of us worked in television, I can’t say how one kind of writing would translate to the other, exactly. But I can say, with great certainty, that comic book writing, by design, offers much more control, not only over the final content on the page, but also in terms of what is possible. There is a massive battle scene and a dragon within the first few pages of the first issue of our comic, and either of those things would cost an astronomical amount of money, time, and worry on a TV set. But in a comic, it cost exactly as much to create those images as it would to create the image of two characters sitting at a table talking. So, your imagination is pretty much the only limit!

GK: Crap, we should have opened with two characters sitting at a table talking… Oh well!

FS: How did you hook up with Z2 Comics? They’re having a big year so far and Allen seems like the right fit for the content you’re creating.

WT: Oh man, the fit could not be better. Z2 is independent, devoted to creator ownership, and they have fantastic taste. We were lucky enough to hook up with them right when they were getting off the ground. I sent Josh Frankel the script, he loved it, and it really was as simple as that, which is a miracle given how not-simple these things can get.

GK: We also had some interest from Scottie Pippen’s award-winning graphic novel imprint Pippen Press, but sadly that fell through when we learned that we had imagined the whole thing.

FS: Both television and comic books are visual media, but employ different ways to marry the visual and the words on the page. How was collaborating with Miguel Porto similar and different than what you’ve had to do before?

GK: Working in television, Will and I constantly butt up against practical limitations. We have to work within budgets, make lots of other people happy, hit deadlines, etc. Working with an artist as talented and collaborative as Miguel, we were only limited by our imaginations and the head trauma Will suffered that destroyed the part of his brain responsible for imagination.

FS: Once Allen is off and running, is there another comic book project you two have percolating you’d like to take a stab at?

GK: Absolutely. There’s a sci-fi thing we’ve been batting around for a while. More on that soon, hopefully!

GK: Oh man, that’s a tough one! It’s super fun any time we can turn a universally recognizable fantasy trope on its head, which is most of what ASoH is. And coming up with little world-building details is a blast – the history, geography, theology, etc. of our little universe. It’s really just an excuse to come up with funny names.

FS: What can readers expect to see in the course of the series?

WT: So many strange and ridiculous things: horse-donkeys, mysterious woods, baffled owls, a knight in shining armor who Allen can’t stand and his father absolutely loves, the bowels of a dragon, a long walk into Utter Nothingness, a battle of wills and wits and witlessness, the distinct possibility but by no means certainty of romance, and at least 158 of the dumbest jokes you’ve ever read.

See? Pick up this book! Trust me. Allen: Son of Hellcock hits comic shops this Wednesday.