This week, the hardback edition for Allen: Son of Hellcock from writers Will Tracy (Last Week Tonight with John Oliver) and Gabe Koplowitz (Viceland) and artist Miguel Porto goes on sale from Z2 Comics. Tracy, Koplowitz, and Porto guide the tale of Allen, a hipster living in the shadow of his uber-warrior father Hellcock, literally: Hellcock’s ghost haunts Allen’s every move, berating Allen for being a disappointment. Fortunately for Allen and the rest of us, Allen gets a chance to show his own mettle as a warrior in a tale equally poignant and hilarious.

Mr. Tracy spoke with me recently about the genesis of Allen: Son of Hellcock, how the idea behind the series taps into our real-world relationships with our parents, and how the time it took to publish the book allowed Will and Gabe to refine the story and stuff it with more and more meta-humor. 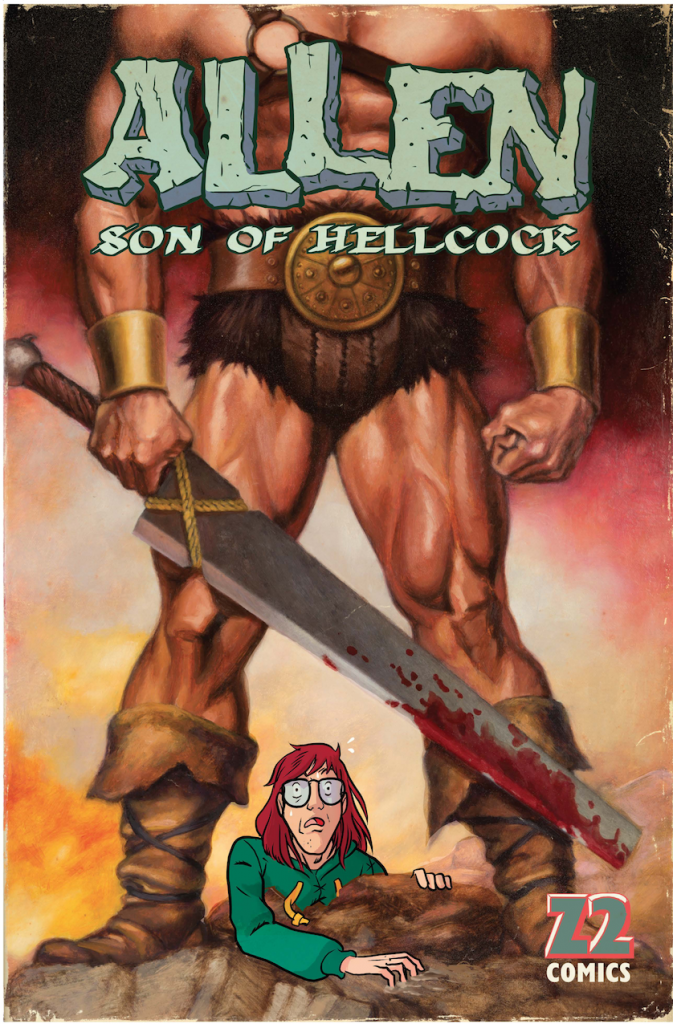 FreakSugar: For folks who might be coming to the book with no foreknowledge whatsoever, what is the conceit of Allen: Son of Hellcock?

Will Tracy: The conceit is that it’s the story of the son of a legendary Conan the Barbarian-style warrior who perished in the line of heroism. His son is a weakling who lives in a gentrified, hipster neighborhood of a fantasyland world. He doesn’t want to be anything like his father. He’s incapable of being anything like his father, which is unfortunate because his father’s actual, literal ghost is haunting him, floating around him, constantly denigrating him for not being a proper son to the great warrior Hellcock.

Through a series of ridiculous events, Allen has to take on his father’s mantle and go on a quest to save the kingdom, all while his father is still haranguing him. No one else can see his father, of course. Only Allen can see and hear him. And Allen has to get together his father’s old gang of heroes, who are completely washed-up. Throughout the course of the book, you get the sense that they were all that integral to begin with. [laughs] They’ve all been resting on their laurels for years. [laughs]

Allen has to gather them all and make a rag-tag gang of heroes to fight the son of Hellcock’s old foe, who is also a complete embarrassment to his father. So it’s basically about two utter embarrassments to their fathers who have to do battle. [laughs]

WT: Yeah! We all feel that way. Gabe and I have great, supportive fathers, so I don’t think we set out when creating the book, feeling that way. As the book went on, though, I began thinking, I bet my dad would prefer his 34-year-old son wasn’t writing a comic book about wizards and swords and shit. [laughs] It’s probably somewhat embarrassing, but he probably chooses not to focus on that aspect of my life. The more he focuses, the more he’ll go, “Wait, what?” [laughs]

I think that it’s the case with even the nicest parents. Our parents were from a different generation. “In my day and age, adult grown men in their 30s didn’t write comic books with orcs.” [laughs] I can’t help but be a little bit embarrassed by that.

WT: My dad doesn’t know that. [laughs] He has no idea. He doesn’t know what Maus or Watchmen are. That doesn’t help. That excuse that comics are high-falootin’ and not just for kids anymore—which is totally true—escaped our parents’ generation a little bit. 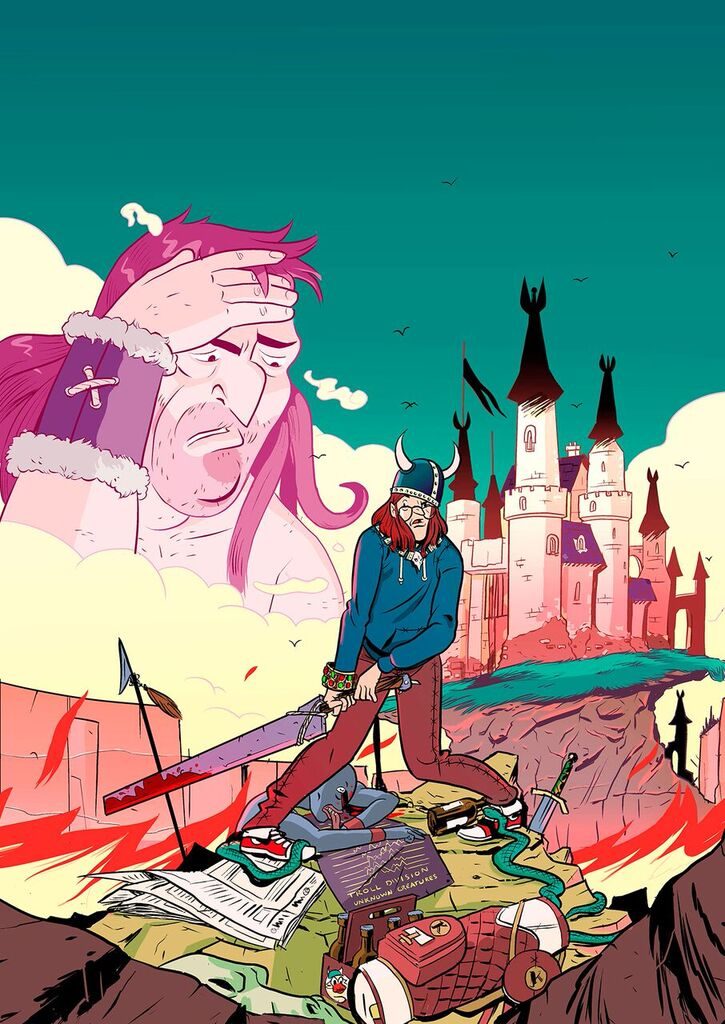 FS: On the name of the book: I’m sorry, “Hellcock” just makes me giggle.

From there, together we spun out and asked what that story would be. He knew at the outset that it was a good title, but we just had to ask what it was. So we retroactively worked backwards from the title.

FS: It’s very much taking Conan to the nth degree.

WT: You’ve got to go all the way. It’s the most absurdly machismo name you can come up with. And then “Allen” is, to me, the perfect counter-name to that. So they have this great symmetry together. I was like, “I know what this story is.”

The writing of it was done really rather quickly. The next part was a period of finding the right publisher, finding an artist. The art took a long time. We initially wanted to do a preview issue of #1, so that took time. It ended up becoming a long journey of getting this book done.

The good news is, we were able to go back and put all of these weird meta jokes into the book. Now, in this finished graphic novel, there are jokes about how long it took for the book to come out. Our published Josh Frankel makes a cameo in the book. [laughs] Also, there were little details that were able to put in since we had time over the years to do so. “Maybe put this in the background. Maybe readers will notice. Maybe they won’t. Maybe they’ll see it in the second or third reading.” So there are little Easter eggs and hidden drawings throughout the book that I think would only have been possible with the time we had to get it out there. That was the benefit of time. 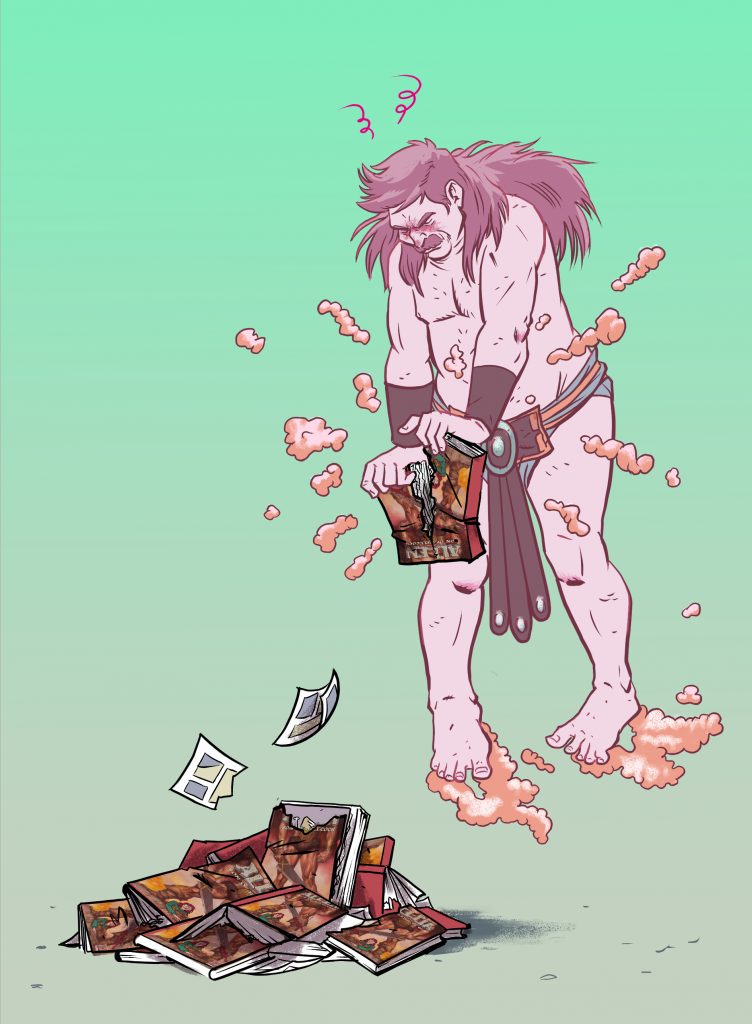 FS: With that time, while the story was written quickly, did you find that the endpoint of the story changed at all? Did the arrow always hit the same destination?

WT: Because we were following and parodying the fantasy quest narrative, we knew that we wouldn’t stray too far from that blueprint. First of all, that’s a great storytelling blueprint that’s quite readable. Secondly, though, it’s what we were parodying, so we couldn’t go too far from that. If you make a movie about a sports team, you know the third act is going to be the big game.

We knew what the third act would be. We knew the characters would make it through the woods and have side adventures, have an “all is lost moment,” but they would ultimately storm the castle at the end and there’s a big showdown with the villain. So we knew all of that would be there. We knew that stuff wouldn’t change.

What did change were elements we cut down. Especially after seeing the preview issue, we knew that there were elements we didn’t need. We don’t need a lot of backstory of Allen necessarily. It’s pretty clear from the outset of Allen with his ghost father what the relationship is, what his arc would be, why he’s dissatisfied. We don’t need to see a scene with his medieval, fantasyland therapist. We don’t need to hear him talking about what his problems are. It’s pretty clear what his problems are when he gets home and his ghost father is screaming at him. [laughs] We were able to trim the fat from it, which left room to add weird, fun, digressive elements.

That’s probably stuff that changed the most. As the book moves along, it becomes more and more self-aware and absurd. There are things that happen in the last half the book that can only happen because they feel more earned. But it’s stuff that, at that point, is constant winking at the reader. There’s more and more of that over time. As a writer, you get sick of reading and re-reading the same script again. It begins to feel stale so we find ways to make it feel fresh and surprising to us. We added digressive elements.

There’s commentary in the book about what’s going on. The characters begin to make fun of our storytelling and writing ability. [laughs] Gabe and I are made fun of in the book for not knowing how to write these kinds of stories, that it all starts to feel hackneyed.

This is telling because it’s our first comic book. It took a really long time to make. We don’t know if it’s any good or we’re any good. It just seems fitting to write that in the book, write in that we don’t know what we’re doing. [laughs] That was a lot of the fun for us.

Allen: Son of Hellcock, written by Gabe Koplowitz and Will Tracy with Miguel Porto on art, goes on sale this Wednesday, October 25th, from Z2 Comics. Also: If you’re in Brooklyn, New York, this Thursday, be sure to check out Will and Gabe’s signing at Desert Island at 540 Metropolitan Avenue from 7:00 to 9:00 PM.

From the comedic minds of Will Tracy (Last Week Tonight With John Oliver, The Onion), Gabe Koplowitz (VICELAND), and acclaimed international artist Miguel Porto comes the original graphic novel  ALLEN, SON OF HELLCOCK, that rare literary debut that has it all: washed-up sorcerers and swordsmen, terrifying horse-donkeys, sensitive ogres, cynical blob-men, ornery minotaur landlords, an exceedingly polite retired despot, a black-hearted but oddly lovable villain, an idealistic young woman who’s the only one with any brains, and a would-be warrior who can’t seem to escape his own hackneyed destiny . . . But mostly, it’s a story about a boy and his father. See, living in the shadow of your father’s legacy can be a tough thing, especially if your dad was the mightiest warrior to ever live.

ALLEN, SON OF HELLCOCK follows the misadventures of Allen, a slack jawed hipster who desperately wants to cast off his family’s legacy …. to embrace his lifelong dream to become a comic book artist. It’s the perfect father’s day gift for anyone with an overbearing dad, which is why it’s ever so perfect that Z2 Comics will publish the graphic novel on October 31, timed to Halloween.