Comic books and the TV shows and movies they inspire are ripe with action figure production possibilities. However, not all of the choices the toy distributor makes are gold, or even sensible. With Marvel Entertainment and 20th Century Fox’s X-Men: Days of Future Past premiering in theaters May 23, we took a look at the worst X-Men action figures selections for sale on the shelves.

Young Trevor Fitzroy was a time-castaway FROM THE FUTURE and a member of the Hellfire Club, the elitist, S&M mutant nemeses to the Uncanny X-Men. (Note: I am obligated to type “FROM THE FUTURE” in all caps any time it appears in an article. My editor beats me otherwise.) Bishop, Jheri curl enthusiast and law enforcement officer from that future’s version of the X-Men, pursued Trevor to the present to bring him to justice. I really don’t have to explain why ToyBiz produced this wonder of a character, do I? Check out that foppish mop of green hair and matching goatee and, as advertised on the package, “futuristic crystal battle armor”. The dude just screams “tough mother” (or Flock of Seagulls groupie). I’m sure that all the little X-fans were clamoring for Fitzroy figures and were pissin’ their Pampers when they found out that their Walmart was a Trevor ghost town. Also, let’s just all pause and remember that Bishop, a character FROM THE FUTURE, was sporting a Jheri curl in a comic book in 1991. The 1990s were cray-cray. 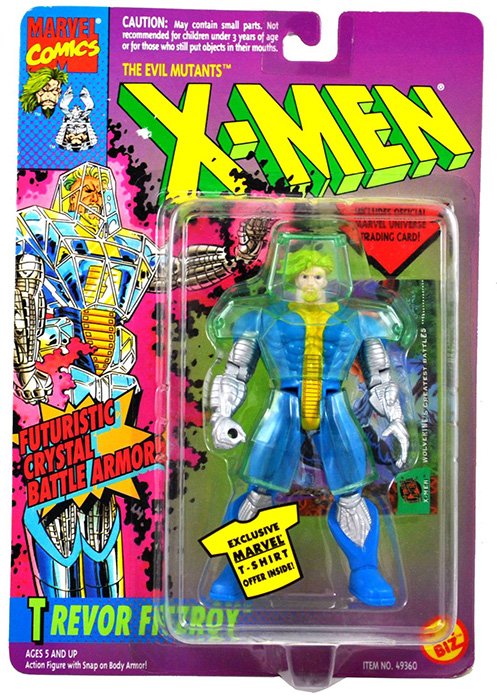 I imagine a pitch at ToyBiz for an action figure for the character Random went something similar to this: “You know how the kids like badasses with guns? I mean, that Cable fella really POPS! Well, what about an action figure of a guy who has a gun already built-in to his body? His body is the weapon! I mean, can you imagine? Oh, what’s that? Who is he? Oh, I think he appeared in an issue of one of the comics? Was he in the cartoon? For like 10 seconds, maybe? Oh, Hell, it doesn’t matter. The kids will eat it up! Look at that snazzy vest and bandana! Collectible value, Gene! (Note: The executive who is being pitched to is Gene. He has marriage counseling after this meeting and has no time for this bullshit.) I’m telling ya, gold! Thanks for the signature. I’ll get the boys downstairs to work on this.” Also: His name is Random. Kids from the 2000s would not have put up with that. 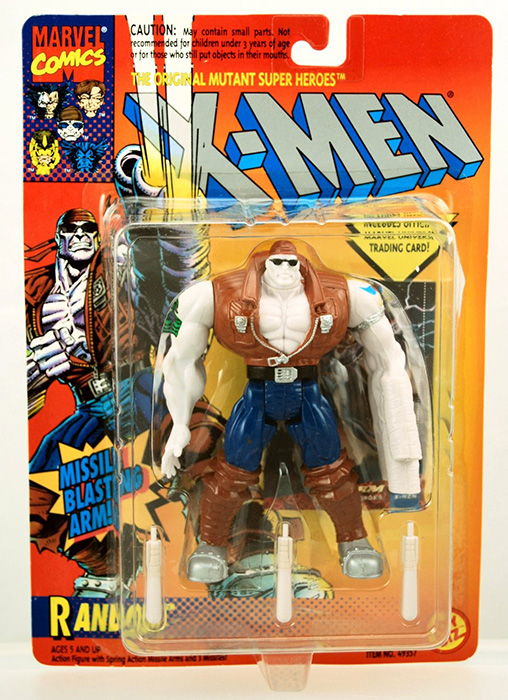 Pink hair? Check. Bone spikes as weapons? Check. Able to be taken out by depriving her of Vitamin D? Check. Playability? *crickets* Moving on. 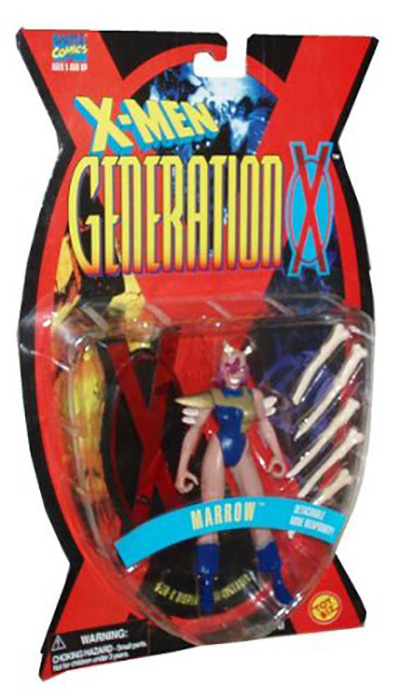 To be fair, visually, Ch’od is pretty striking. The alien has a vaguely reptilian/oceanic face with a green, imposing body reminiscent of the Hulk. And he’s a member of the Starjammers. Who are the Starjammers? They’re a band of space pirates led by Cyclops’ dad who protects the Shi’ar Empire. The Shi’ar? The Shi’ar are a humanoid race with feathers instead of hair. …I lost you at space pirates, didn’t I? (Also: Ch’od is one letter away from chode. Coincidence?) 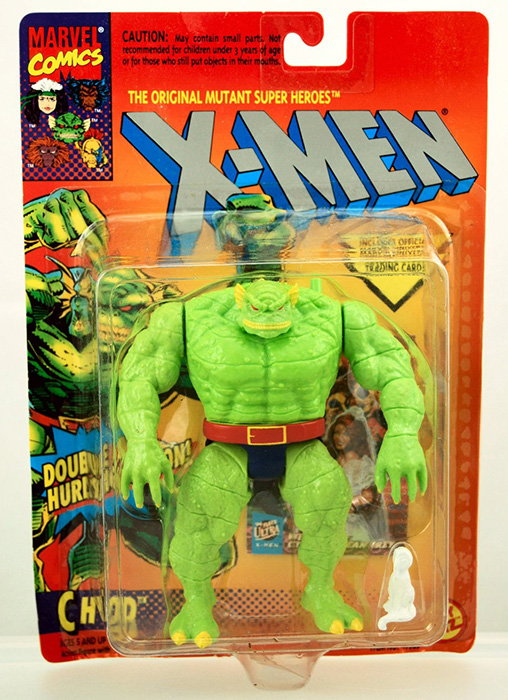 What if we created a character based on a Herman Melville icon and gave him a harpoon and a peg leg, and crafted a backstory in which he hunted mutants in the future? What, too on the nose? Ahab’s greatest notoriety comes from his role in the comic book storyline X-Men: Days of Future Past, but I highly doubt he’ll appear in the film adaptation of that story. And if he does, I will watch the entire run of Sex and the City for my shortsightedness. As far as the action figure is concerned, Ahab comes with a harpoon. For harpooning mutants, I guess? Sure, let’s say that. 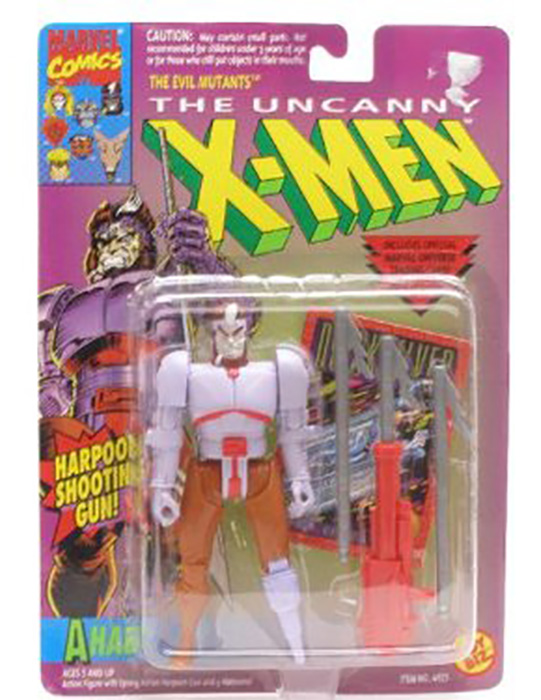 We can hardly talk about X-Men action figures without giving a shout-out to the world’s favorite Canadian killing machine– next to Bryan Adams. I think it’s a law or some such. Wolverine is the Barbie of the X-Men action figure set. Any version of Wolverine you can think of has most likely been made into an action figure? Wolverine in his yellow costume? Done. Wolverine as Patch? Boom. Wolverine as Tybalt in a stage production of Romeo and Juliet? Check. As such, it’s little wonder that ToyBiz produced a version of Wolverine from his government ops days. Quick questions, though. One, how is gold armor stealthy? Also, why does Logan have a knife? He has adamantium claws. Wolverine, thy name is redundancy. 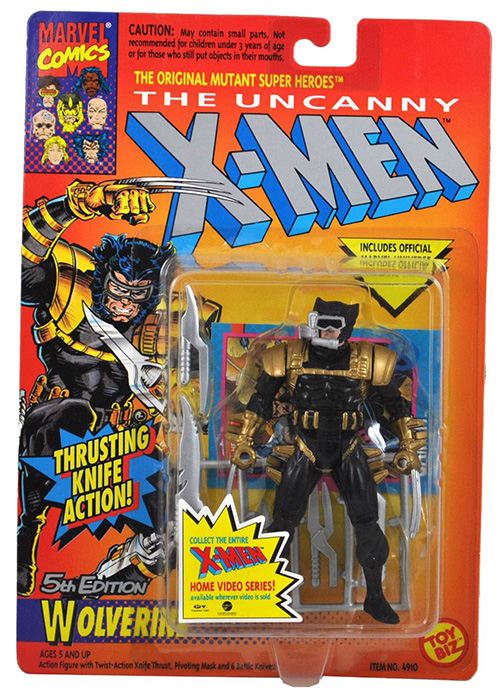 You’ve just watched The Lord of the Rings: The Fellowship of the Ring. Your mom tells you she’s found an action figure of Sauron at a thrift store. Kick ass! Sauron owns or pwns or whatever it is that the kids say. Mom walks into the room with an action figure of a green, anthropomorphic pterodactyl that blink-and-you-missed-it appeared on an episode of the X-Men cartoon. Life has no meaning. 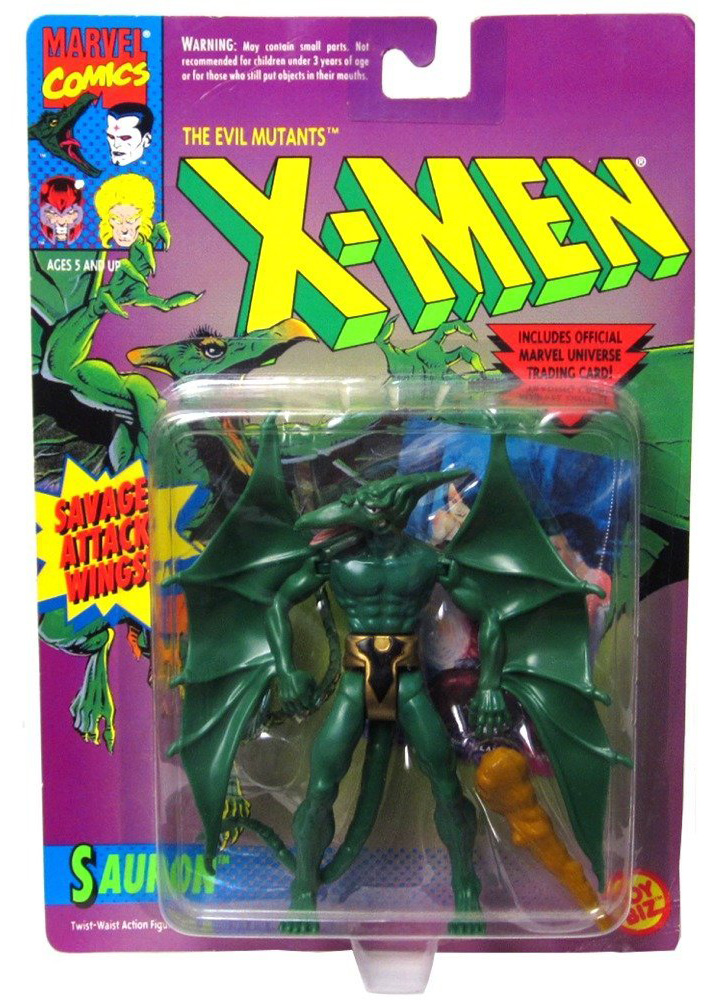 What if a writer combined the beauty of Paul Mitchell hair, the countenance of Victor from the Beauty and the Beast television series, and the novelty of swords? What you get is Kylun, who apparently was meant to capitalize on the badassery of Wolverine and the furry subculture. But, as the action figure packaging states, Kylun has twin striking swords, so there’s that. 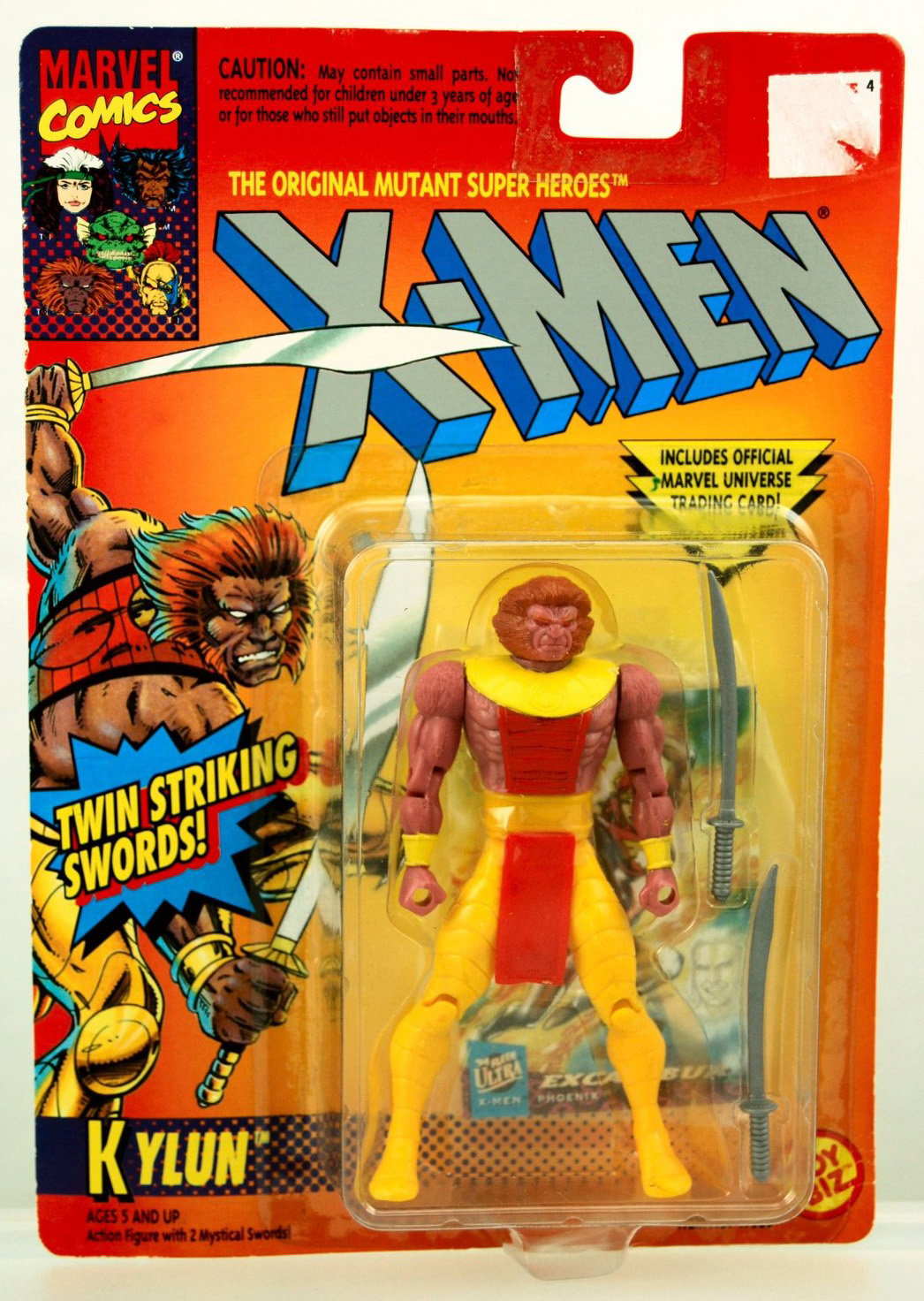 Some action figures are meant for greatness. Some action figures have greatness thrust upon them. And then yet others have “rapid fire guns” and a name that would make characters from the New Gods cringe. But hey, G. W. Bridge used to battle Cable. And everyone loves Cable, right? 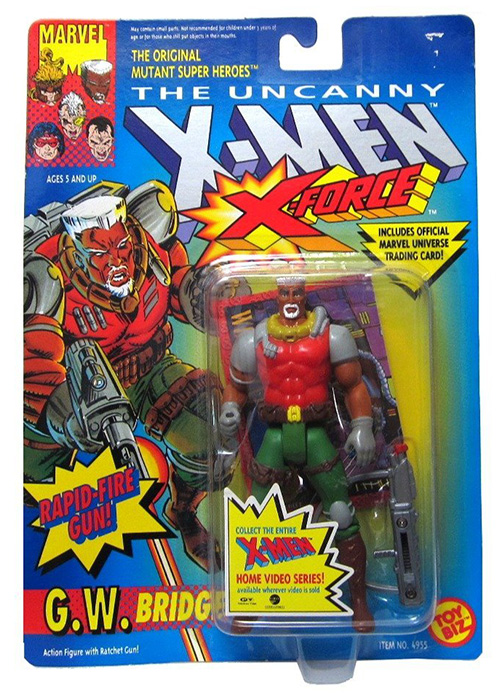 Wanna know how to tell that ToyBiz was reaching for characters to fill a toyline quota? Quark doesn’t even his own Wikipedia entry. There’s just a note that he’s associated with the X-Man Longshot. If my claim to fame is that I had a tacit connection to Longshot, I’d choke myself with my own underwear. 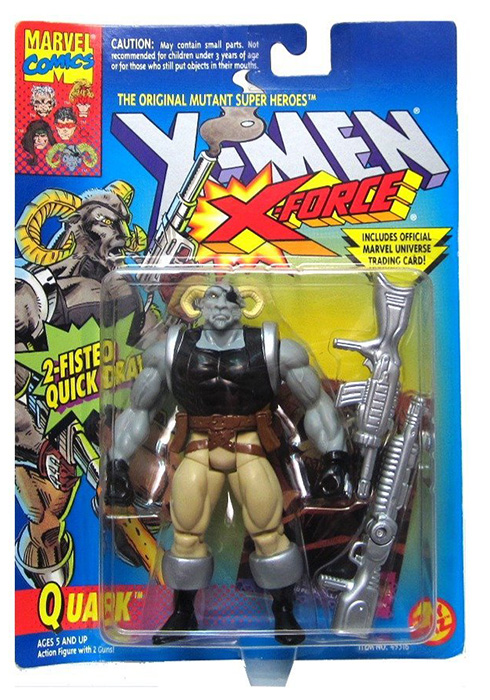