Namor the Submariner has been experiencing a well-deserved moment in spotlight in the last few months. The half-human/half-Atlantean underwater king and superhero-sometimes-antihero first appeared in the unreleased Motion Picture Funnies Weekly #1 in early 1939, before formerly being introduced in Timely Comics’ Marvel Comics #1 later that same year. As Timely would eventually change its name to Marvel, this makes Namor one of Marvel’s first comic book characters, predating Captain America, the Avengers, and the X-Men.

And over his 83-year history, the Submariner has acted as ally and adversary to such superhero teams as the aforementioned X-Men and Avengers, doing what he deems best for his Atlantean subjects, regardless of who is spurned. That Namor is the one it seems we’ll meet next month in the Marvel Studios film Wakanda Forever and one that speaks to Namor’s nuanced character and history.

It’s that same nuance that writer Christopher Cantwell (Iron Man, Star Wars: Obi-Wan) will bring to the miniseries Namor: Conquered Shores, debuting this week from Marvel. In Conquered Shores, we meet a Namor decades in the future on a flooded Earth, with the king-no-more acting to help the planet’s remaining humans in an attempt to atone for his sins against the surface dwellers. The book spotlights a reflective Namor that is sure to bring pathos and dimension to an already rich character.

I spoke with Mr. Cantwell recently about the conceit of Namor: Conquered Shores, where we find the Submariner at the beginning of the story, how the character has changed over the years, and the appeal of Namor, both to readers and to Cantwell himself. 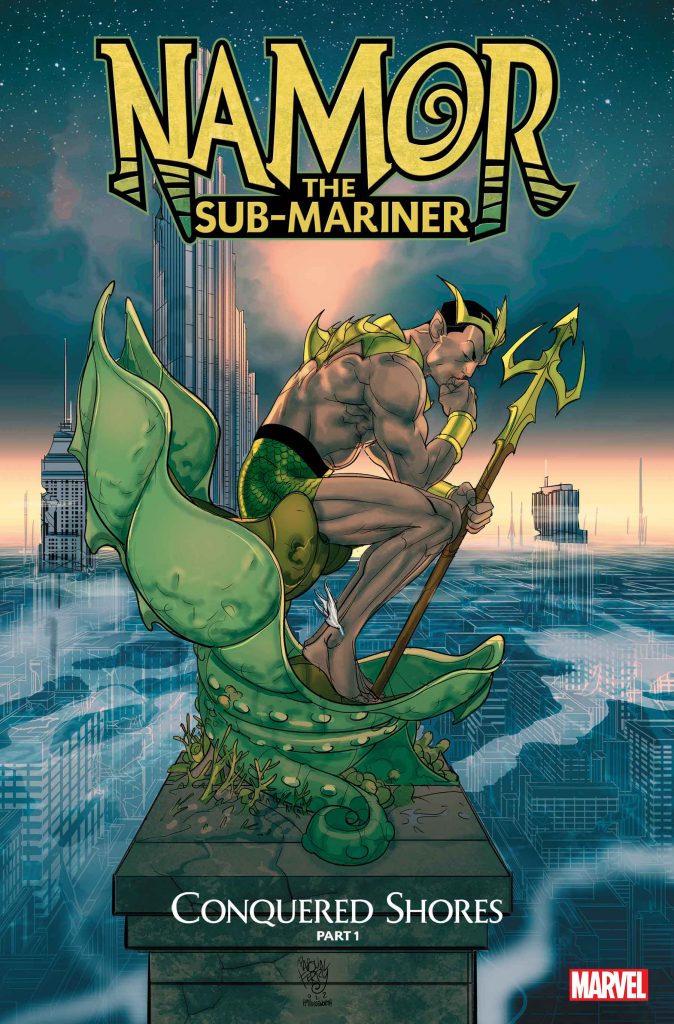 FreakSugar: Before we delve into Namor: Conquered Shores, what is your personal history with the character, either as a fan or a creator?

Christopher Cantwell: I’ve long been a fan of the Original Human Torch and the Timely / Atlas Era of Marvel Comics. It’s Marvel’s own Golden Age. That definitely includes Namor and the Bill Everett era of his stories. The epic battles between the Torch and Namor have always captured my imagination, more so than any of the more contemporary stuff Namor has showed up in over the years (although I love that too). I’ve always wanted to write a “Golden Age” type Marvel story with those characters.

FS: What is the conceit of Namor: Conquered Shores?

CC: My way in for this story was to do precisely that—write a Golden Age-style story, but set it at the end of time, or at least at the end of the Marvel Universe. The concept is that the Earth has flooded due to both human errors and climate change, and a devastating atmospheric attack by the Kree. 100 years have passed, and Atlantis is now the de facto ruler of the planet due to much of it being ocean. Namor has ruled over that for much of the time but has recently stepped down from the throne. In his twilight years, he’s turned his attention to trying to save the remaining humans on the surface, which is really him confronting and dealing with his guilt over the way he behaved in the past. 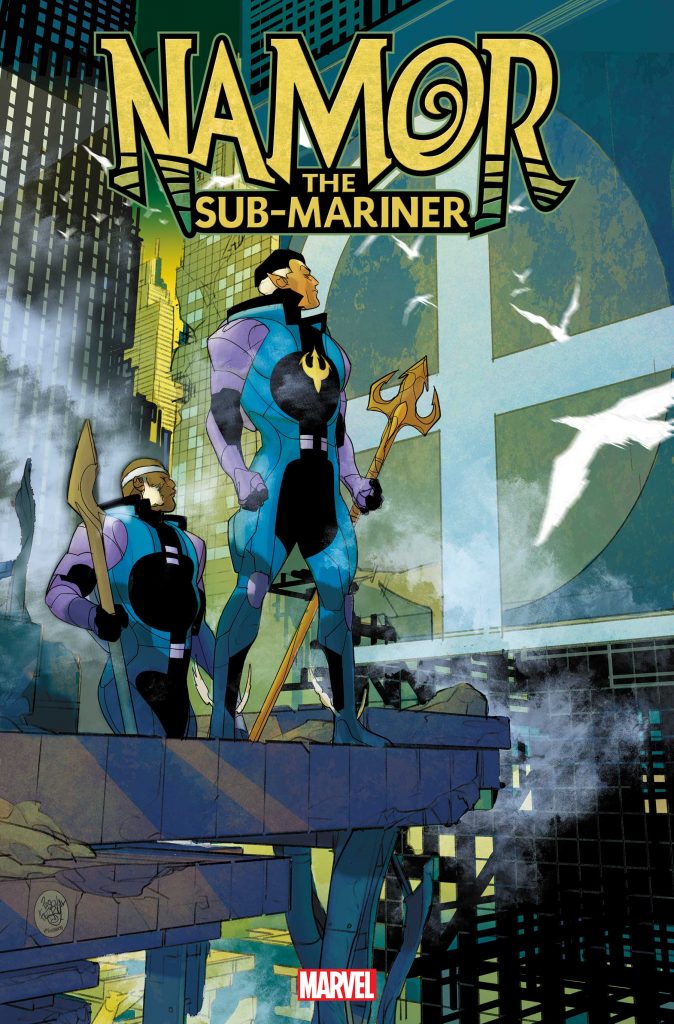 FS: You said that this is the first idea you’ve ever blind-pitched to Marvel. How did the idea come to you?

CC: I was reading some (Namor creator Bill) Everett Sub-Mariner stories and it struck me. Water is a big issue in Southern California where I live, and in other places it’s also a problem when it comes to flooding. In a Marvel Universe parallel, this kind of geographic shift seemed to create a paradigm where Namor and Atlantis would eventually have much more power and territory than they currently have. That was at least the germ of the idea. I was on a road trip with my family through the southwest and I was lying on a couch one night after everyone had gone to bed and I thought of a flooded Earth in the future where Atlantis ruled everything. It was one of those ideas where I actually said out loud to no one, “Oh that’s interesting,” and I built it out from there.

FS: From your description, the book is going to feature a more reflective Namor, something that he hasn’t always been in his long-lived history. Where do we find Namor at the beginning of the series?

CC: As I mentioned, Namor has finally stepped off the throne. Namorita is now in charge. Namor concerns himself with trying to help the remaining surface humans, who basically live on degraded and ruinous islands of land that remain, many of which are garrisoned by Atlantean soldiers. Namor has a pilot program—an underwater oxygenated settlement—that he’s trying to get off the ground. But the settlement has a lot of fuel problems, supply problems, food problems… so it’s really not a great place. Namor can’t get the full support of Atlantis to make it better and expand it. He’s out to prove that it can work and that he can make a better life for the remaining air-breathing humans… but it’s all wrapped up in him trying to make good on his vengeful, mercurial attitudes and actions toward the surface in the past. 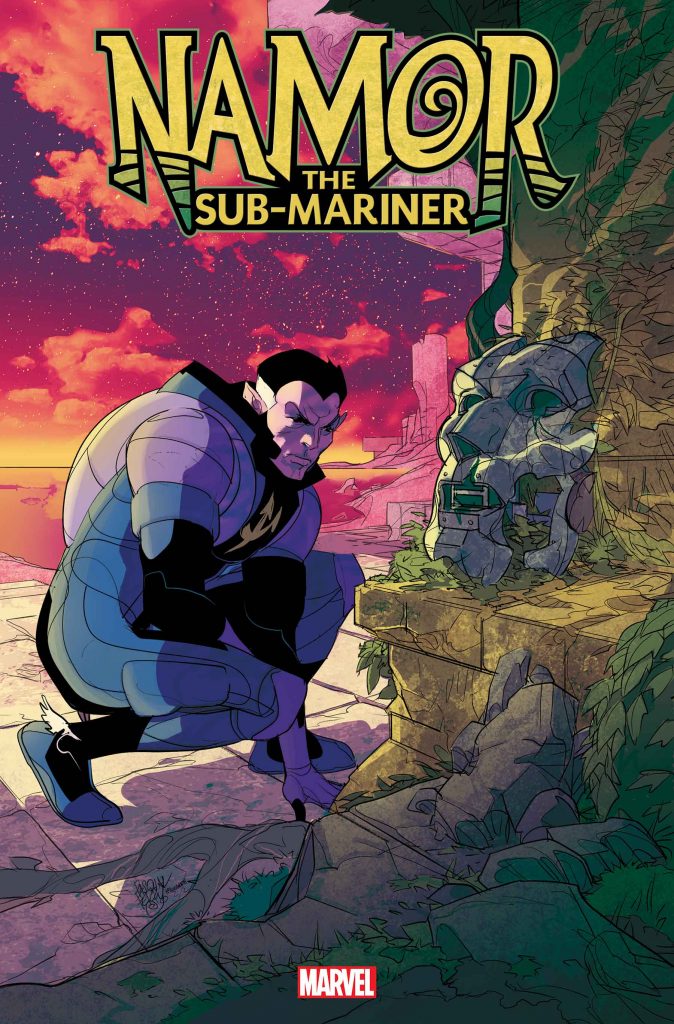 FS: How would you describe the world we see in Conquered Shores? How has Namor shaped the Earth we find?

CC: Atlantis is thriving. It’s the unified power of the planet and unchallenged. It’s so big that there’s infighting and real politick going on within it. Alliances with old enemies have been made while other ones continue to stir up trouble within the empire. Atlantis is sprawling, bigger than it ever has been.

Humans remain up above, but are largely neglected. They rankle at being overseen by Atlantis. They can’t reckon with being second class citizens and having the roles reversed in such an extreme way.

There are still other factions hiding out and trying to go unnoticed by Atlantis, too. The book is really global in scale, and deals with everyone left alive, and how they ally and sew conflict.

But it’s also a highly intimate story in that we’re following Namor on this personal sojourn on the surface, this singular mission. It just all has global implications from the get-go.

FS: Namor is one of Marvel’s first characters, predating even Captain America. You mention that the miniseries is both a love letter to Marvel and that it builds on the first war of Marvel heroes. Can you expand on that?

CC: I love the Bill Everett / Carl Burgos / Alex Schomburg era. I can lose myself in that art. Those early All-Winners and Invaders stories. It’s Marvel’s Golden Age. So much attention is directed to DC’s Golden Age because it contains all the characters we still know and follow in the same way today. Marvel’s is more interesting to me because it all kind of reinvented itself with the Fantastic Four, which kicked off most of what we now and read now. But Namor survived and made the transition, using the Fantastic Four as a bridge into the modern era. That is fascinating to me and there are deep psychological and emotional resonances that allowed for the character to survive. He is so elemental. So is the Human Torch (who survived… literally, but albeit mostly in a different way as a new incarnation in Johnny Storm). I like taking bygone characters and telling new stories with them. I did that with Patsy Walker / Hellcat in Iron Man, who is another Timely era character in origination. It’s just fun to juxtapose then and now in text and have characters grapple with that very thing in their identities. 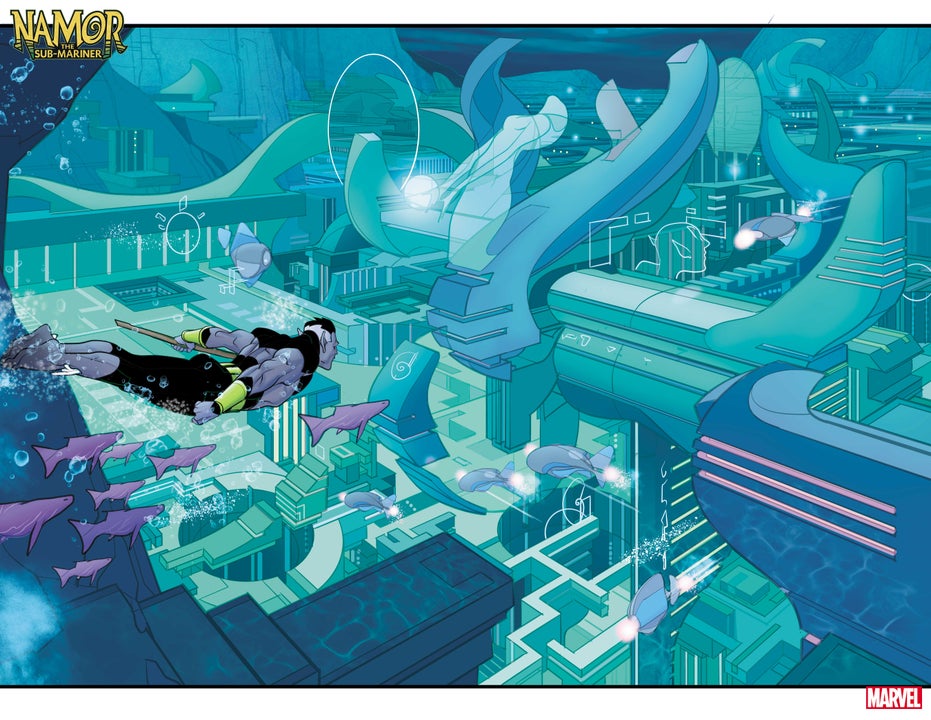 FS: The great Pasqual Ferry is illustrating the book. What has the collaboration process been like with you two?

CC: I just love receiving his pages. His art is so incredibly unique. It also has this timeless quality to it that is perfect for the story. He’s aged Namor appropriately (who ages more slowly due to Atlantean genes), but he speaks to the beginnings of the character too. There are flashbacks where Pasqual is doing his take on a Golden Age Namor in such a cool way. There are even new Atlantean characters who feel like they stepped off Everett’s panels. Pasqual nails Atlantean eyebrows, let’s just say that.

I don’t know if he internalized it, but when I first talked to him I said I wanted this to feel like Terrence Malick directed it. It’s coming across, at least to me, in these sweeping and haunting vistas that Pasqual has created, these pensive close-ups. It’s spectacular work. I’m hugely honored to share the byline with Pasqual.

FS: Namor has been in the spotlight more than ever of late, from his roles in everything from the X-Men universe to the Defenders to the Avengers, as well as significant part in the upcoming Wakanda Forever. He’s often described as one of comics’ first antiheroes. What do you think it is about Namor that fascinates readers?

CC: As I mentioned, he’s elemental. He also straddles two worlds. He’s part human and part Atlantean. Those characters who feel apart, belonging to neither of the places they’re from… I think people can dig into that, because who among us doesn’t feel like that? All the characters in this story are of divided worlds. The Torch is a machine who looks like a man, and so is comfortable as neither. Frankenstein’s Monster shows up, and he’s a living corpse, neither alive nor dead. Even Captain America and Luke Cage are men who often feel divided inside. All of that swirls around in this story.

But yes I think Namor endures because he defies categorization. He feels more like a force of nature than a typical hero. He’s been an Avenger and also an ally of Doctor Doom. Namor serves no master, no codified rules. He’s like a samurai ronin in that way. He goes with his gut, even when his gut is selfish and wrong. But he’s noble and sincere and has a moral compass. He’s incredibly rich as a character in the Marvel Universe.

FS: Following up on that, what is it about Namor that draws you to the character as a creator?

CC: His divided nature is attractive to me and I can identify with that. Also that he can be an asshole. I am certainly guilty of that. He has a temper and gets heated but also has a profound and deep love for the people and the world around him. He despises human inclinations and yet shows some of them himself. It’s something I reckon with in myself daily.

FS: Is there anything you can tease about what we can expect to see in Namor: Conquered Shores?

FS: If you had one last pitch for the series, what would you say to potential readers?

CC: We did this story in five issues, but I think Pasqual and the team and I created something with some real breadth and depth. Some of it to me feels novelistic (and I almost wish I could adapt it into a novel, of all the comic things I’ve written… Marvel, can I?). It’s the Marvel you know and love, but almost an entirely different universe and set up. The rules have changed and the deck has been shuffled. All bets are off in this book. It’s also unexpectedly wistful and quite beautiful, both in the story and the art. We dug deep in every way we could. I think people will dig it.

A century into the future, not much land remains on Earth. A combination of a worsening climate and a devastating war with the Kree has left the surface of the planet mostly inhospitable, with an ever-dwindling population of air-breathers and a profound lack of super heroes to protect them. Enter NAMOR, who these many years on is no longer King of Atlantis…but ruler of the entire world.