What happens to world when a totalitarian regime is toppled? Who or what fills the void that is left behind? After loosening Superman’s dictatorial grasp on the planet in the Injustice: Gods Among Us video game and comic book series, Batman is about to find out. In the series Injustice 2, a prequel to the original game’s sequel, writer Tom Taylor follows Batman and his allies as they attempt to repair the effects of Superman’s tyranny while at the same time keeping at bay those who wish to fill the power vacuum the Man of Steel left behind.

With the first six issues of Injustice 2 now available as a collected graphic novel, Mr. Taylor spoke with me recently about where we find the characters of Injustice in the new series, ensuring that the characters’ motivations are logical and sound in their own minds, and how writing Harley Quinn and making her a standout character was a welcome surprise to him. 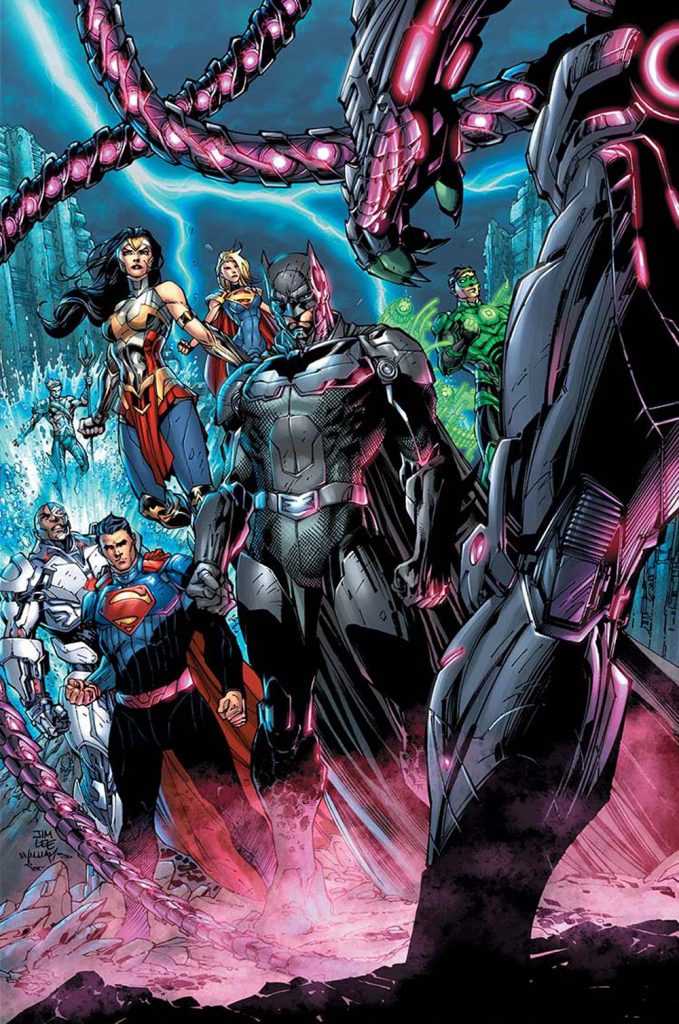 FreakSugar: For folks who might be coming to Injustice 2 fresh, what can you tell us about the conceit of the book? Where do we find the state of the world after the fallout of the first Injustice series?

Tom Taylor: After the defeat of Superman and his regime, we have Batman and… pretty much everyone else who NetherRealm [Studios, producers of the Injustice 2 video game] or I didn’t kill, rushing to fill the power vacuum. Though, let’s be honest, we brutally killed a bunch of fan-favorite characters. Sorry! There are new players on the scene, and we’re seeing the rise of Ra’s Al Ghul as an environmental terrorist. Ra’s and his group, including the Suicide Squad, are out to take down part of humanity, so the planet may live. 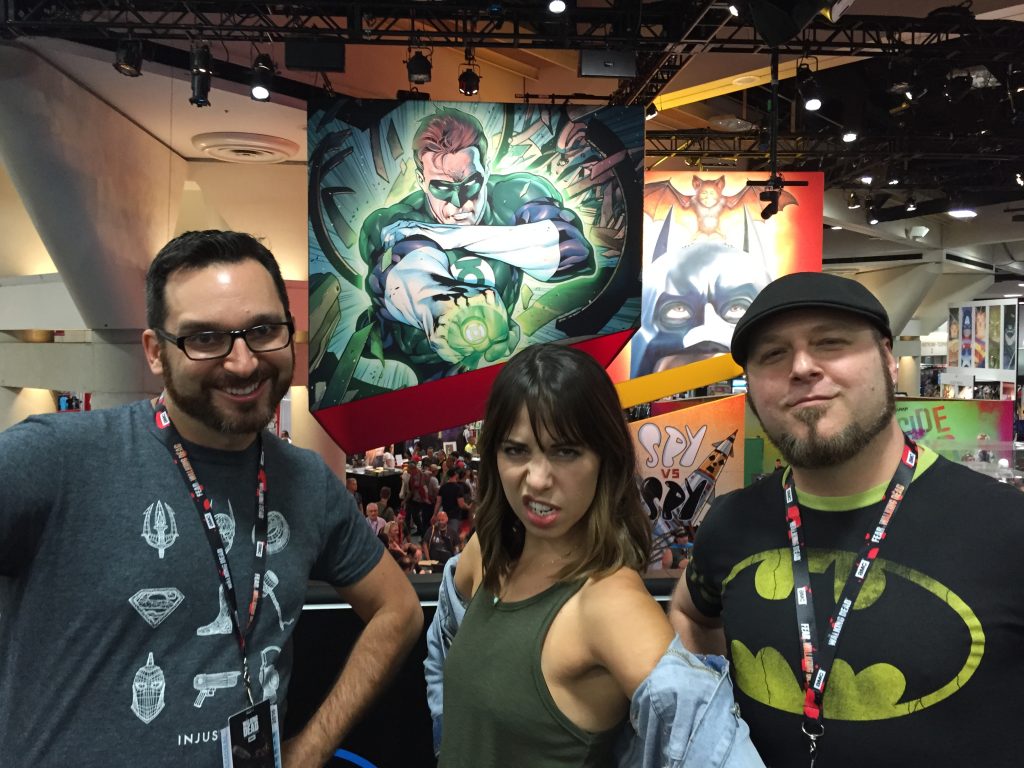 FS: Injustice 2 is a prequel to the video game storyline. Given that the game was developed and its story written, what kind of leeway were you given when spinning the tale?

TT: It’s a similar situation with years 1-5. The Injustice 2 game doesn’t start straight after the first game, and things have obviously shifted. It’s up to us to explore and establish the new world, the alliances and changes in the groups. There are also some big things talked about in the game which we never see, like Supergirl being raised by Black Adam and Wonder Woman, or Jaime Reyes coming to the fore after the death of the original Blue Beetle. 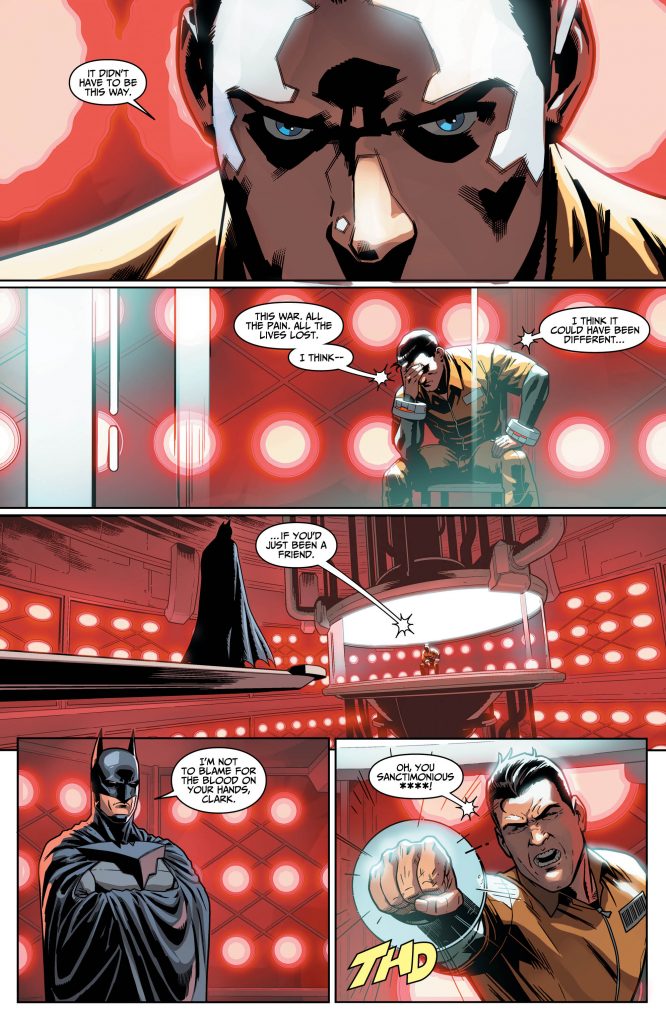 FS: Following up on that, what was the process like to ensure that fans of the game reading the book felt an overall more enriching experience by both playing the game and reading the comic?

TT: The game and the comics are one universe and one story. Both inform the other. The game is better with the comics, the comics are better with the game. I make sure I know the game script well, and I extrapolate from there. If there’s anything I’m ever unsure of, I send Shawn Kittelsen, the lead writer of the game, a quick message, and we hash it out. 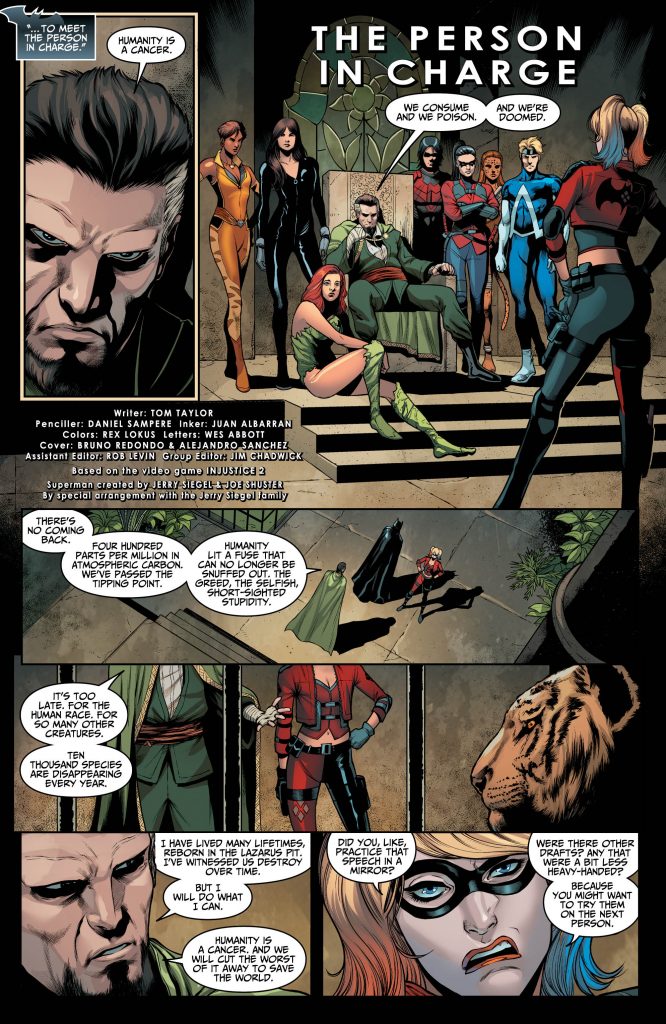 FS: Injustice and Injustice 2 have characters who crisscross and dance around moral compromise—or outright stomp on it. Are there heroes or villains that you found sympathies with in the course of writing the book?

TT: Absolutely. Getting to a place where Superman could turn into what he did was the hardest thing for me. He’s my hero. But I wanted to make sure that every single character in Injustice was coming from a logical motivation. That every villain was the hero in their own eyes. There are shades of grey throughout this series. I never knew how much I’d enjoy writing some characters, like Harley Quinn, and finding voices like that, you tend to just keep wanting to understand them more. In Injustice 2, one of the standouts is Damian Wayne. He’s a kid I’ve always been on the fence about, but he’s really growing on me in Injustice 2. 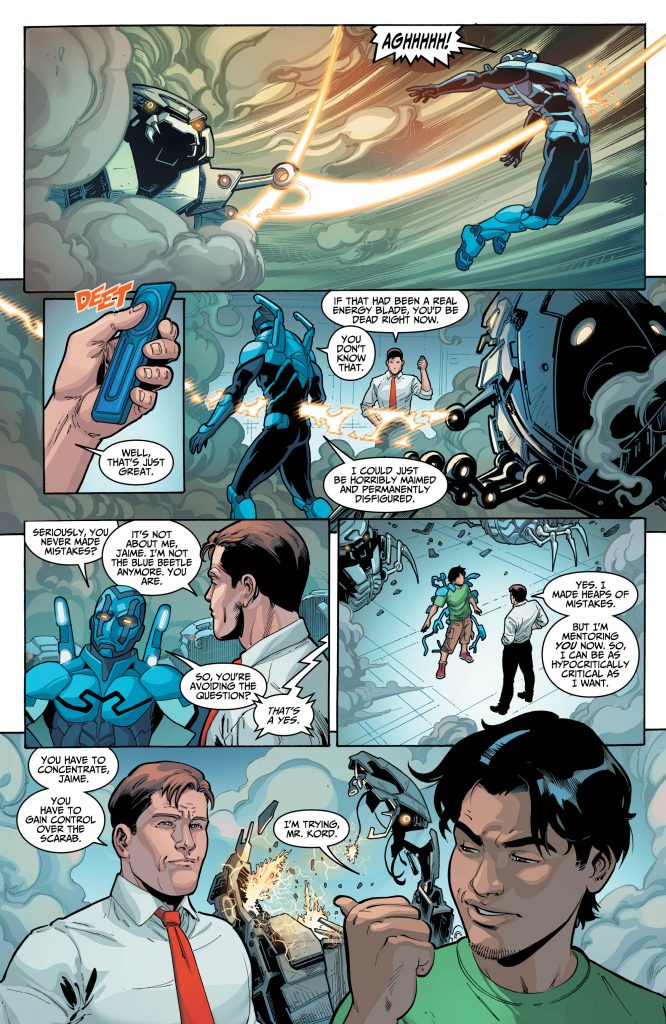 FS: You’ve really given different characters time to shine; for instance, with The Atom, while a brutal scene with Superman, was a novel way to showcase his powers. One of the big standouts is Harley Quinn, who is often a voice of sanity amongst the crazy swirling about. Was that one of your mission statements for the book, to bring Harley to the fore and build on what had been established?

TT: No. Absolutely not. But from the moment I began writing her, I really clicked with her, and I had to write her more. Chapter #5 of year one, with Green Arrow and Harley, was probably the most of myself I’d put into an Injustice chapter to that point. I’m a huge Ollie fan and his world-view is very close to my own, but Harley says all the things I want to say. I couldn’t believe what writing Harley Quinn allowed me to do as a writer. She has this unique view on the world, coupled with a fantastic voice full of tragedy and comedy. She’s been a little broken by her past, but she’s come through strong. Injustice provides her a bright future, and I think that’s why she’s so popular in our universe. 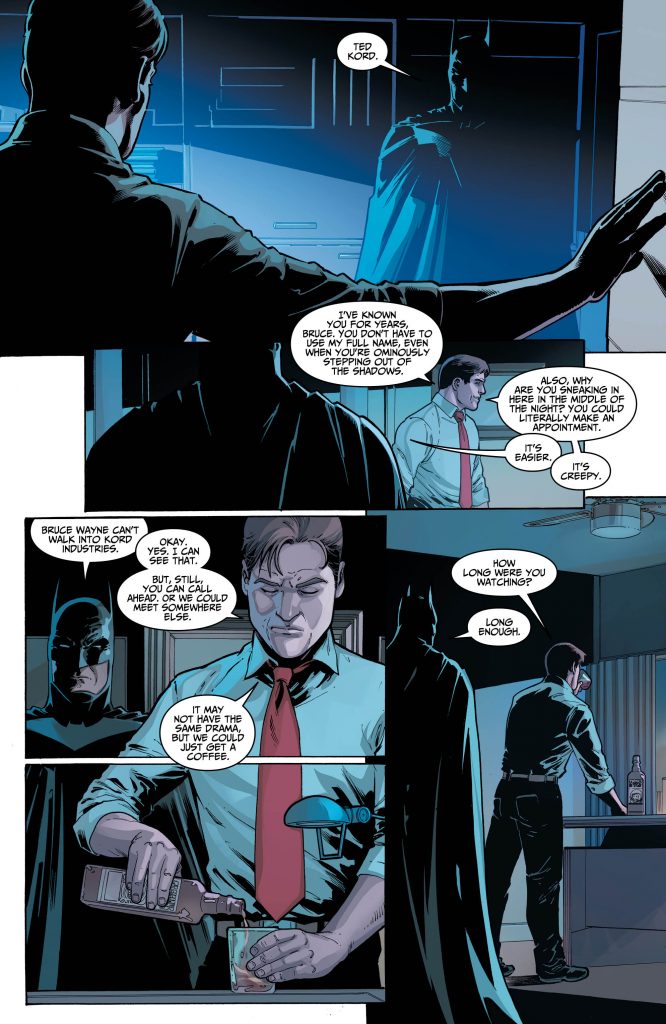 FS: While there are moments of hope sprinkled throughout Injustice and Injustice 2, the world and storylines connected to Injustice can be aggressively dark. Is there a mindset that’s necessary to dive into to write the series?

TT: I think humor and true heart are the key. Without humor, this thing wouldn’t work, and I wouldn’t want to write it. Similarly, if there weren’t characters who admired, loved, and depended on each other, nothing would feel right. Injustice is a comedy, an action movie, and a soap opera all wrapped in one. Fortunately, we have people like Bruno Redondo, Daniel Sampere, Juann Albarran, Mike S. Miller, Rex Lokus, Wes Abbott and J. Nanjan who can make all of this sing.

From the official synopsis of volume one:

Tom Taylor continues his hit series Injustice: Gods Among Us story as Superman is imprisoned, and it’s up to Batman to put the world back together. But with Superman’s iron-fisted regime eliminated, other forces rise up to fill the void. And Batman doesn’t have a lot of allies left to help stop them. But when Harley Quinn has an encounter with Amanda Waller, the new Suicide Squad ends up breaking into the Pentagon. Featuring appearances by Harley Quinn, Superman, Damian and man more. Collects Injustice #1-6.