Bray Wyatt and his family of miscreants has taken the WWE by the throat and has forced cheers from the fan’s gaping maws through incredible feats in the squared circle and unrivaled promos on the mic. Daniel Bryan, Kane, CM Punk, and now John Cena and the remnants of The Shield have all fallen to the charismatic Bray Wyatt and his devastating finishing move “Sister Abigail”. Geez, I am such a wrestling mark, you people have no idea! Anyway, some of Mattel’s best offerings when it comes to quality, articulation, and accessories come from their WWE lines, so join the family as I check out the WWE Elite Bray Wyatt figure from series 28 of my favorite plastic addiction!

The packaging for Bray is the same as we’ve seen for all 2014 Elite Collection releases thus far. I dig the blue and white color scheme, and the image of the Superstar next to the blister bubble makes it easy to see who the store has in-stock from a distance– which comes in handy when unsure on whether or not you should sprint down the action figure aisle like a lunatic in order to keep your most-wanted figures from the sweaty clutches of other collectors! Not that I do that sort of thing. I’m not obsessive. Really. I’m not. Shut up! You can’t judge me! Only Bray Wyatt has any say over my heart!

Bray’s color text from the back of the box:

Not much is known about the mysterious leader of the Wyatt family other than he hails from the backwoods of your nightmares, and that he’s on an apparent mission to darkly enlighten the WWE Universe. Whether watching from a rocking chair ringside, or introducing unfortunate Superstars to Sister Abigail, Bray Wyatt’s eerie and dangerous presence sends the message that no Superstar is safe. Decimating the likes of Daniel Bryan and CM Punk on RAW, Wyatt and his family members, Erik Rowan and Luke Harper, have already proven that when you see this creepy clan coming, you better “Run!”

The sculpt for Bray Wyatt is spot-on. You show this figure to a wrestling fan, ask who it is, and I can guarantee they won’t answer “Hulk Hogan” or even “I don’t know”. They might say “Get that figure outta my face” as they make a slapping motion in your general direction– but that’s just their way of stating they badly desire you to DDT them on the concrete floor of the Wal-Mart you have decided to conduct your action figure polling in. Screw em. The laser scanned face features a smiling visage, which I normally HATE, but for Bray, it fits his character. The long hair and scraggly beard match his look, along with the sleeveless, breast-pocket top and sweet leisure pants. Mattel, thankfully, didn’t overly jack him up with muscles and his body proportions look right. While the WWE lines are known for re-use when it comes to figure parts, Bray’s head, chest, (and possibly lower legs) are all newly sculpted pieces.

Paint for this figure, like all Mattel WWE stuff, is as minimal as possible. Nothing sucks quite as hard as seeing scuffed paint on your Vince McMahon after the Legends’ Stone Cold delivers a stunner on top of the cage! Therefore, Mattel tries to mold as much as possible in the color it needs to be. Bray still has plenty of paint apps, though, thanks in no small part to his myriad of tattoos. They’re all stamped incredibly well, and even manage to convey how muddled his upper arm is in real life thanks to a cover-up tattoo he sports. Like wrist tape on other figures, Bray’s right gauntlet/glove is simply painted onto the arm. Sadly, its accuracy falls short. Bray’s thumb is exposed, when in real life (and even on his packaging) the glove extends over his thumb. On down, his boots have a two-toned look, with the brown being a paint pp. There is an addition snakeskin pattern added to make them look more like what this bayou profit wears to the ring.

Articulation for the “Eater of Worlds” is the same amazing system that I’ve come to absolutely friggin’ love from the Elite Collection. A ball-joint head, swivel/hinge shoulders, swivel biceps, hinged elbows, swivel/hinge wrists, hinged torso, swivel waist, ball-joint hips, swivel thighs, double-hinged knees, and swivel/hinge “rocker” ankles allow Bray to beat down anyone that doubts his leadership over the souls of humanity! no loose or stuck joints on this guy… and the added articulation over the Basic line allows for Bray to be put in the creepy spider-walk pose!

When it comes to accessories, it’s all about looking like a hobo on vacation for Bray Wyatt. He comes packaged with his hat and tropical shirt, and they really complete the ensemble of a man about town/destroyer of time and space look that Wyatt cultivates so well in the ring. the hat fits snugly on his head, has a single band of brown paint, and is what it is. The shirt is the real star here, though. Featuring a pattern straight out of every senior citizen’s Florida wardrobe, the shirt is made of very thin cloth that can be slipped under the hair on Bray’s shoulders to fit him amazingly well. Soft goods are more miss than hit when it comes to mass-retail 6″ figures, but in this instance it is definitely a hit.– a hit right in the face with a steel chair!

Usually, I hunt WWE figures down in the wild–refusing to order online and instead relying solely on my cunning and natural plastic-prowess to acquire my toys. However, Bray broke me down. As soon as I knew he was released, and I couldn’t immediately have one, I hit up Ringside Collectibles and placed the order. Now, the long wait begins for Elite 29’s Erik Rowan and Luke Harper so I can complete the Wyatt family…and get that sweet rocking chair for Bray! 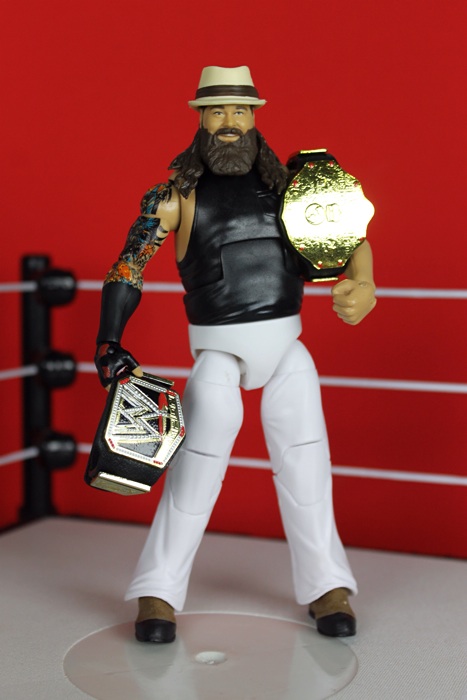