I was watching Star Wars: Episode I: The Phantom Menace the other day because, well, I don’t know why. My girlfriend and I were looking for something to view that we didn’t have to commit all of our attention to and landed on Phantom Menace. It’d been at least a decade since I’d viewed it. I won’t dog pile on all that’s been said about the film, so I’ll just say it’s just not easy to take in. I won’t enumerate all the reasons why it usually bugs me, but something new did irritate me about the film this go around, and it centers on famed and beloved Jedi Master Yoda; particularly, his first meeting with Anakin Skywalker—the future Sith Lord and scourge of the galaxy known as Darth Vader.

Anakin has just come from his home planet of Tattooine to Coruscant, the center of the Republic and, later, under Palpatine, the Galactic Empire. Coruscant is also the home of the Jedi Council, leaders of the Jedi Knights, the Republic’s peacekeepers. Jedi Qui-Gon Jinn met Anakin on Tattooine and believes that Anakin should be trained to become a Jedi. The Council is resistant to this, as Anakin, even as a boy, is older than most children when they are first trained as Jedi. However, they agree to meet him. Here’s how the first interaction between Anakin and Yoda goes (around a 1:05):

What the Hell, Yoda? (To be fair, Yoda comes off much more like a horse’s ass before the scene was edited as it first appeared in 1999. I honestly think it’s because the face of the puppet looks judgmental. Seriously.) 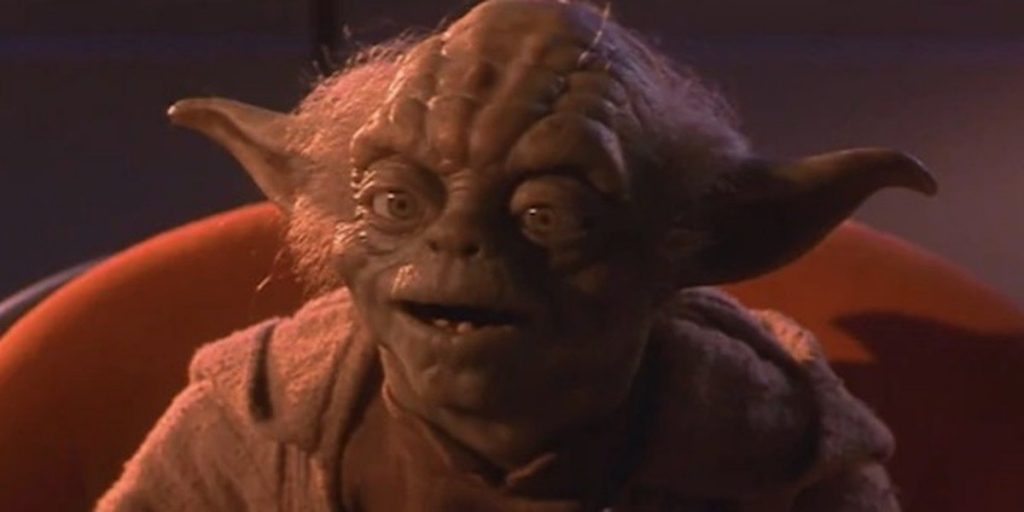 For what it’s worth, we’re told or it’s suggested that the Jedi are supposed to be kind and loving, even if they can’t have emotional attachments or relationships of their own. Young Anakin just left the only home he ever knew, the only relative—his mother—he ever knew, like two minutes ago. Then meets Yoda, who grills Anakin and stares disapprovingly at him with his buggy CGI eyes and basically tells the boy that he sees all this awfulness in him simply because Anakin is afraid. Of course Anakin is afraid. That judgmental grilling is going to unnerve anyone, especially a young boy who has just left behind everything. Where’s that love and compassion for Anakin?

Look, Yoda’s fears were more than warranted, as we saw in the original trilogy and as we see as the prequel trilogy progresses. Anakin’s fears and uncertainty—further exacerbated and manipulated by Chancellor/Emperor Palpatine—do lead him to become one of the most monstrous shadows the galaxy has ever felt. But Yoda has all the tact and subtlety and tact of the sledgehammer, and you could see it possibly having an adverse. And maybe he’s testing the boy to look for weak spots, I get it. However, instead, this what the move should have been, in my estimation:

Meet the kid. Be noncommittal about training him, but be pleasant. Extend some of that famed Jedi compassion to, you know, a child. Then, in private, talk to the council, and express your concerns to them. Don’t unload on a kid in your smug Jedi-ness. Great first impression.

Thanks for listening to my JED Talk.

Star Wars: Episode I: The Phantom Menace is streaming on Disney+.