I’ve been incredibly impressed by the series initiatives that Z2 Comics has been bringing to the table since the start of its big publishing push last fall. The diversity of concepts and genres, from Ian McGinty’s Welcome to Showside to Christopher Hunt’s Carver: A Paris Story, have shown a real commitment on the house’s part both to providing a variety of tales to its readers as well as giving creators the leg room and flexibility to tell the stories they want to tell.

Z2 continues that precedent with its announcement of writer Michael Moreci and artist Matt Battaglia’s Indoctrination, a new comic book series which the publisher describes as “an apocalyptic political thriller.” Check out these preview pages to get a taste of what to expect when the series hits this June! 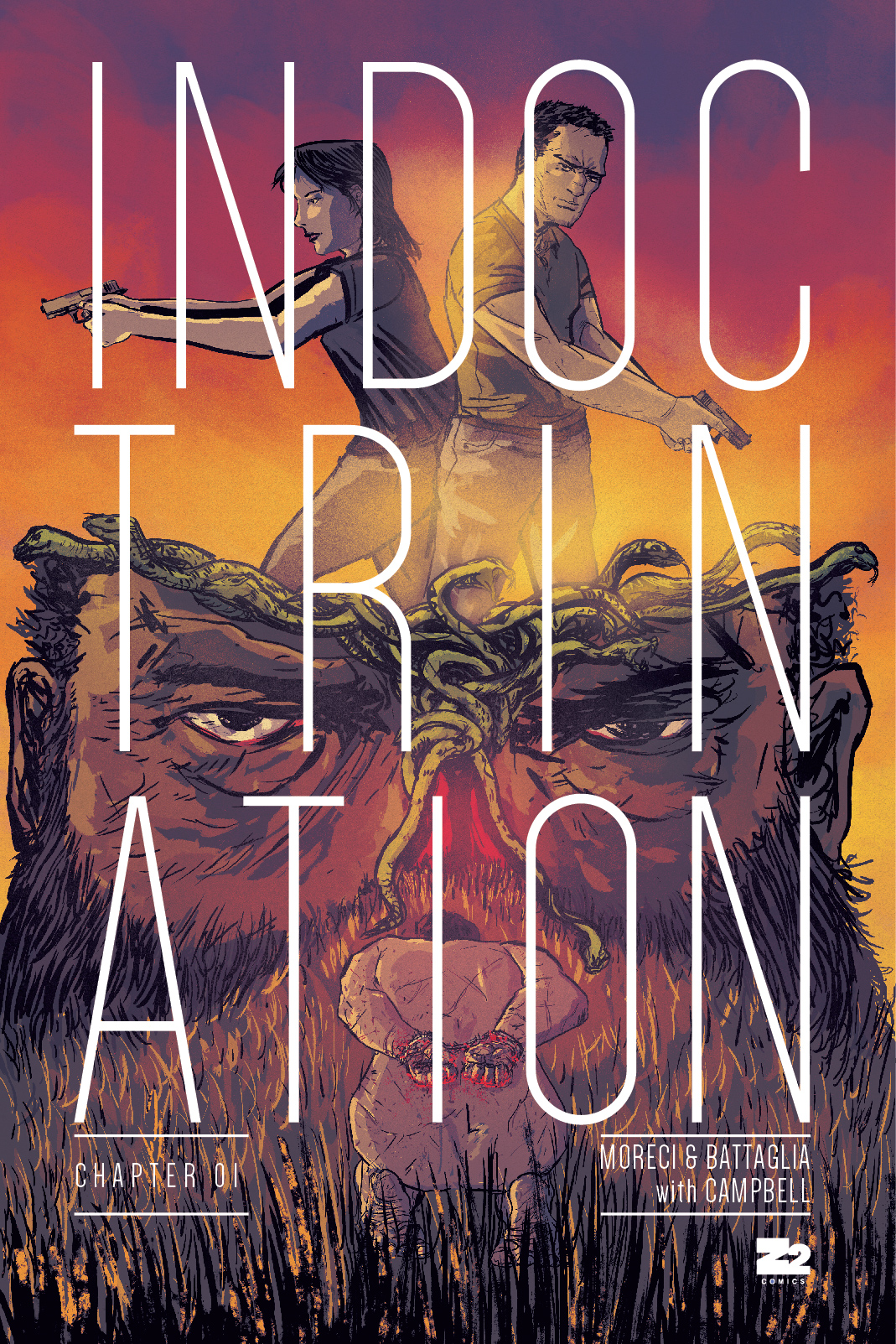 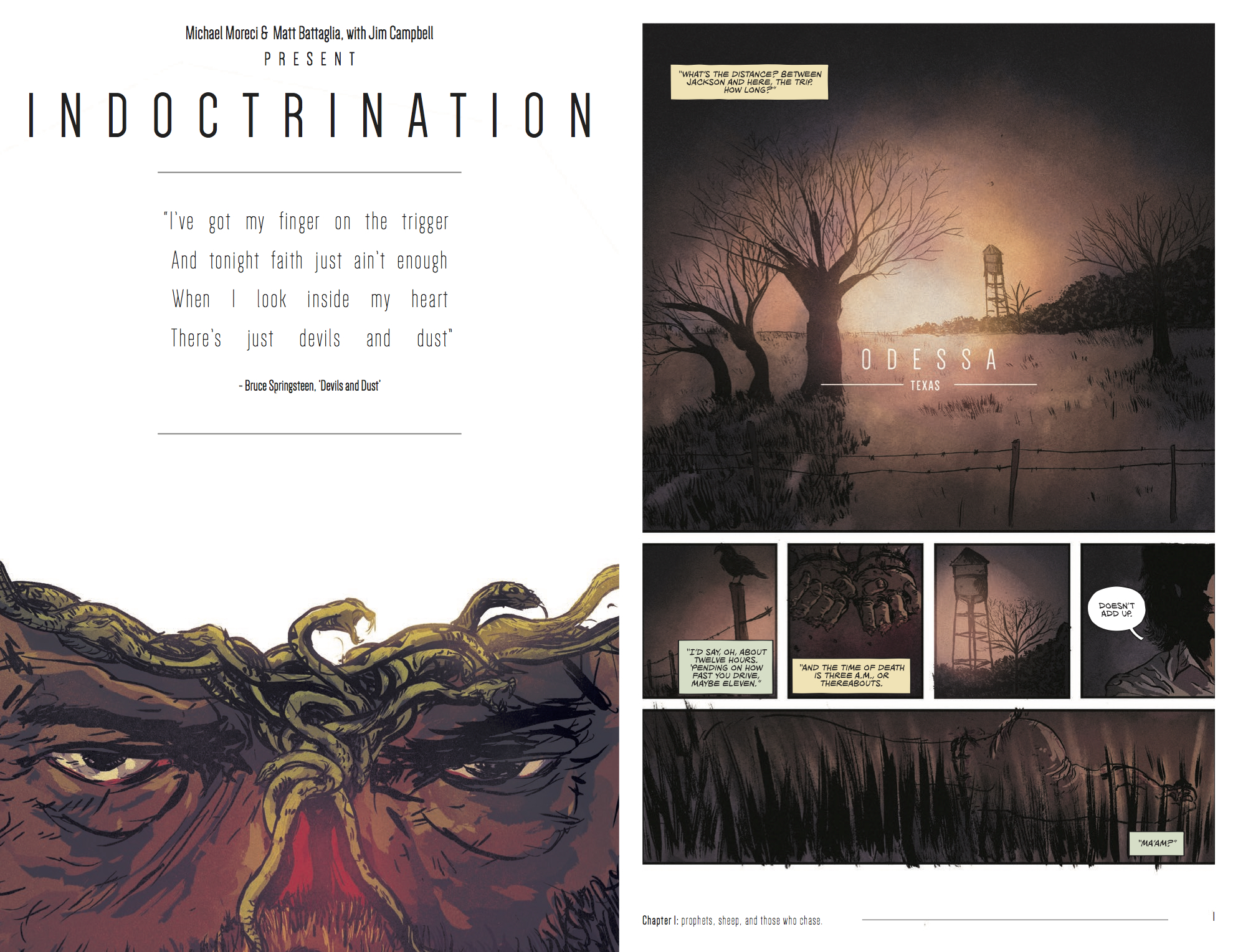 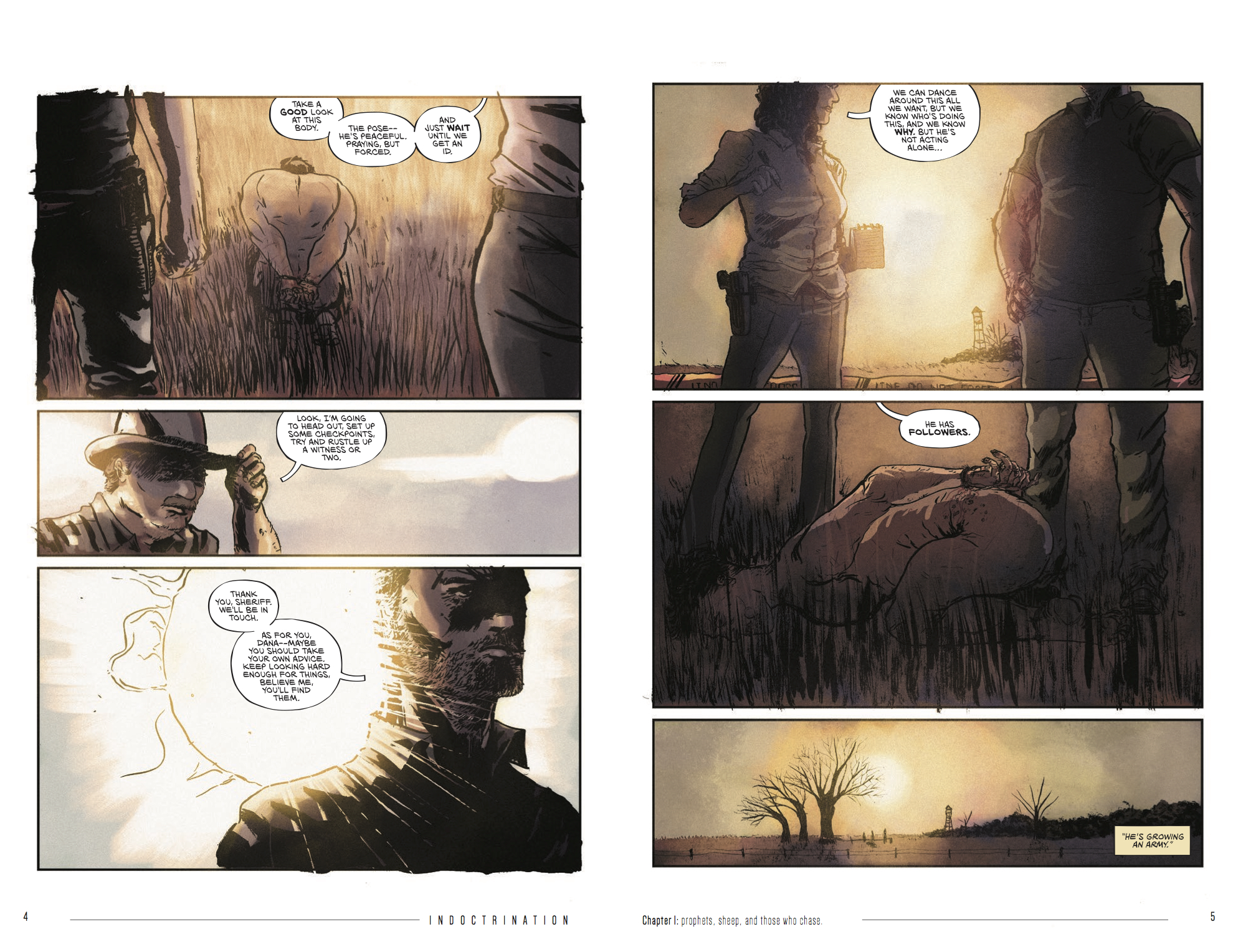 The tagline for the series, which is described as a being in the tradition of True Detective and Se7en, poses the question, “How do you kill an idea?” With the publisher’s promise of a yarn that involves an alchemy of apocalyptic action, political backdoor dealings and shadow meetings, and a look at the philosophical exhortations of the human spirit, color me all sorts of intrigued.

Across the dusty plains of America’s southwest, a deadly storm is brewing. A string of murders portend the sinister designs of an infamous terrorist to bring about the end times. Two FBI agents have heeded the signs, and only their rogue actions—aided by a potentially untrustworthy expatriate with deep ties to the terrorist—can push this darkness back.

This June, comic book writer and novelist Michael Moreci (Roche Limit, Burning Fields) and artist and former political operative Matt Battaglia will unleash INDOCTRINATION, a comic book series about America’s terrifying underbelly—of death cults and sleeper cells, serial killers and apocalyptic nightmares. INDOCTRINATION follows these two FBI agents as they develop a complicated relationship with an infamous terrorist, in an attempt to solve a string of grizzly, seemingly related murders. Mixing elements of True Detective with Seven, this new series from Z2 Comics captures the definition of fear in the 21st century.

“With INDOCTRINATION, we really wanted to create a thrilling, entertaining story that is also a way to explore the reality of death cults like ISIS, and the terror they instill in us which is constantly pulsing beneath the surface of American culture,” says Michael Moreci, a former journalist who recently signed a two-book deal with St. Martin’s Press. “Collaborating with Matt Battaglia has been ideal, because he’s a gifted artist who has also been able to use his background in politics to inform his work on INDOCTRINATION.”

At its core, INDOCTRINATION is an exploration of the power of ideas, and how ideology can drive mankind to act in horrifying ways. The series marks the first full length illustrated comics work of Battaglia who has previously worked for a Washington DC Super PAC.

“With INDOCTRINATION, we’re excited to publish our first modern, politically-minded series,” says Josh Frankel, Z2 Comics Co-Publisher. “The story has serious content, but it is first and foremost a riveting read, with gorgeous, detailed characters who really pull readers into their world.”

INDOCTRINATION is due out in June from Z2 Comics, and will retail for $3.99. For more information, visit http://www.indoctrinationcomic.com/

“Time was, you’d have to tilt your head a good forty degrees to see the maggots writhing under the skin of our culture. Nowadays it’s more like ten degrees. Moreci and Battaglia’s sublimely bleak Indoctrination takes us all the way to zero. There. See? You were looking in a mirror the whole time.”

“INDOCTRINATION is a brilliant, cerebral, and deeply philosophical comic that dedicates itself to exploring the depths of the human psyche, brought to us by two creators firing on all cylinders. Simply put, one of the best first issues I’ve read in a long while. I can’t wait to read more.”

“INDOCTRINATION is the work of a storyteller using a keyboard made of glass shards in the pursuit of truth. For as long as I’ve read Michael Moreci, he’s never pretended to seek out anything else within his stories– and it’s clear he’s not stopping anytime soon. Matt Battaglia proves he can do it all, from the book’s exquisite design to the viscously beautiful art, making INDOCTRINATION one stark and powerful collaboration.”—Tim Daniel, writer, Enormous, Burning Fields

“Bloodshed and making things go bump in the night is easy— Portraying the real terror we feel is not. It’s not the monster, it’s what the monster changes inside of us. True horror always comes from within, and “INDOCTRINATION has found a way to make that happen both figuratively and literally. That’s some transcendent spooky shit.”—Seth Sherwood, writer, Leatherface

“INDOCTRINATION exemplifies what I love about crime comics: rife with style and craft; an almost palpable atmosphere; and completely unsettling but magnetic–I can’t look away even though the doom and undoing seems imminent. This is Michael (Moreci) and Matt (Battaglia) at their best.”

Michael Moreci’s original comics works include Roche Limit  (Image Comics), which is currently in development for television, and Burning Fields (BOOM! Studios). Moreci’s Curse (BOOM! Studios), a modern-day werewolf story, is in film development with Blumhouse Productions. His self-published series, ReincarNATE, has been optioned for television by Patrice Théroux and Buck Productions. Moreci has also written the in-canon comic series that bridges the gap between Rise of the Planet of the Apes and Dawn of the Planet of the Apes. Also a novelist, Moreci recently signed a two-book publishing deal with St. Martin’s Press to write a space adventure series inspired by Star Wars. He is also currently writing the novel Spy Swap for Lawrence Gordon Productions, to be published by Thomas Dunne Books. Moreci lives in Chicago with his wife, two children, and his dog.

Matt Battaglia is an illustrator and graphic designer, Indoctrination marks his first full length illustrated comics work. Prior to Indoctrination he colored the BOOM! title ‘Dead Letters’ and colors the Image Comics series ‘Roche Limit’ written by Michael Moreci. Outside of comics Matt is a graphic designer, he currently works at Hirepurpose. Previously Matt worked in DC during the last election cycle, where he worked for a C4 and a Super PAC.