Since his parents’ deaths, billionaire Bruce Wayne devoted his life to ridding his home of Gotham City of the criminal element that robbed Thomas and Martha Wayne of their lives. His goal and his hope was to not only prevent as many lives lost as he can so that no one else would have to suffer as he has, but also so that, in the process, he can transform both Gotham and himself. Most would consider his task to be a herculean endeavor and a thankless task, the promise of a child to which a tenacious man would not acquiesce defeat. For Bruce, that child’s promise would create the Batman, a guise that would at times drag Bruce to depths of despair, but, more often than not, would lift him up and give his life purpose, albeit an unconventional one.

But what if Bruce Wayne was free from the responsibility and the spectre of the Batman? What if Bruce’s parents had never died and he didn’t experience the pang of loss that would compel him to wage war on crime itself? That’s the question that the Batman comic book creative team of writer Scott Snyder and artist Greg Capullo are exploring in their current storyline “Superheavy,” currently in its third part with Batman #43, in stores now. The tale features a Bruce Wayne who, following a battle royale with the Joker, has no memory of his life prior to that confrontation. And it’s not just a matter of a simple case of amnesia. 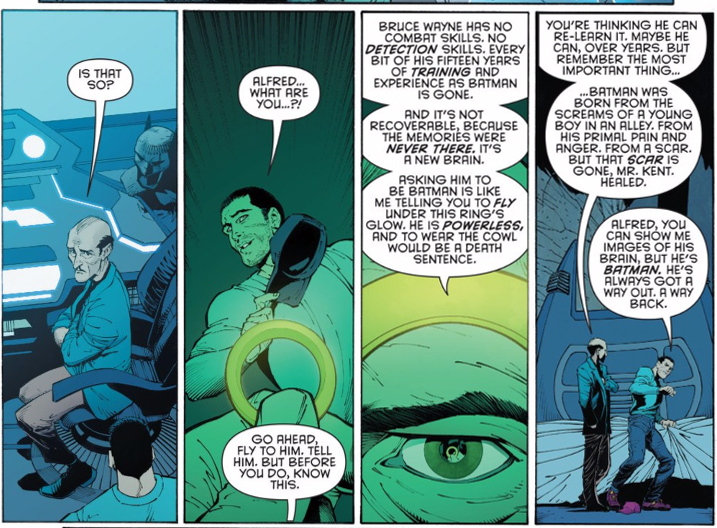 “Bruce’s entire neurological landscape is completely different,” Scott Snyder explains. A chemical that the Joker had been employing to heal wounds and make a play at immortality seeped into Bruce’s broken skull, healing his body. In the process, however, Bruce’s neural pathways were a clean slate. He was born anew, without any of the memories, skills, know-how, or tragedies that are the trappings of a Dark Knight. While Alfred, Bruce’s surrogate father, told him of Bruce’s life prior to being Batman, Bruce wanted to hear no more, opting instead to pursue his mother and father’s legacy of helping the downtrodden. Working in a children’s center in Gotham, he seems perfectly happy with his life and his lady and childhood sweetheart, center director Julie Madison.

Will Bruce Wayne ever again adopt the cape and cowl? My guess it’s an eventual certainty. Even Mr. Snyder has alluded to it once or twice. But the important part is the story, the ride how we’ll get there, and the moments we see Bruce have a real chance at normalcy. As Alfred tells Superman, “That man is the only true Bruce Wayne to ever walk the Earth.” And there’s something in that. The question of identity has played a weighty role in many of Batman’s tales over the years, with creators and fans alike arguing who is the “real” person, Bruce or Batman. Some writers have slanted toward the side of the Dark Knight, while others, like Snyder, have taken a more holistic approach, looking at the entirety of the character as taking attributes from both sides of the coin.

However, this might be the first time that a Batman creator has taken the idea of a Bruce Wayne who never experienced—at least in his mind—the tragedy of his parents dying and committed to following that thread wherever it might lead. In a recent interview with FreakSugar, Mr. Snyder elaborated:

The question I’m trying to answer for myself that I hadn’t seen anyone do before is what if Batman died and Bruce Wayne came back? What if Bruce came back free from the trauma of his parents’ deaths and the specter of Batman and the scars, free from the mythology and the obsession? Who would he have been if his parents had lived? What would he have been if he hadn’t witnessed his parents’ deaths? Who is Bruce Wayne without Batman? He’s not retired. He would never tired, in my opinion. But what would he be without that ghost? That’s what I found so interesting and so heartbreaking.

What’s so gratifying about Snyder’s exploration is that it demonstrates how well he knows Bruce Wayne the character and the man. Even without the knowledge of the emotional pain of losing his parents to spur him to doing good in the world, Mr. Snyder unequivocally knows that Bruce is the type of person, at his core, who would try to use his gifts and talents to help his fellow man, regardless of the situation. Snyder shows that despite his skill set or his place in the world, Bruce Wayne would use his talents to find a way to make the world a better place. It’s just who he is.

And, really, this plays into a notion that Bat-fans have long debated: Bruce’s retirement. Many readers’ of the Dark Knight’s tales seem to agree that only physical impairment or death would be an obstacle to keeping Bruce from setting aside the cape and cowl. Even in the above quote, Snyder affirms that, in his mind, retirement is not an option for the Batman. And yet, even in a world in which Bruce has no memory or notion of his past as a masked vigilante, the essence of Bruce compels him to act as a force of good. Bruce Wayne has a compulsive urge to protect the innocent and mend people and communities.

While reading Batman #43, I couldn’t help but keep coming back to Neil Gaiman’s Batman tale “Whatever Happened to the Caped Crusader?” Toward the story’s climax, a seemingly-dead Batman is talking to his mother and the nature of the afterlife. During their conversation, Bruce’s mother tells her baby boy

You don’t get Heaven or Hell. Do you know the only reward you get for being Batman? You get to be Batman.

That seems to ring true, doesn’t it? While Bruce would probably never retire (in most stories, anyway; see Batman: The Dark Knight Returns for one exception), his reward for being Batman is the knowledge that he has had the opportunity to be Batman, to make an indelible mark on the world and do what in his heart what he knows to be the Right Thing and what gives him joy. That’s why I feel like, so far, “Superheavy” can be seen as a companion piece to Gaiman’s story, the other side of the same coin. Both show a Bruce Wayne whose ultimate reward for his time on this planet is the chance and the ability to help people. That, in itself, is his Heaven on Earth.

While I don’t think it’ll last, it’s nice to see, if only for a while, a Bruce who has been rewarded for his good work, his Happily Ever After.

Manic Monday: BATMAN: WHATEVER HAPPENED TO THE CAPED CRUSADER?