Since taking over DC Comics’ Green Arrow series with issue 41, writer Ben Percy has been giving readers a slow burn of a tale, stripping superhero archer Oliver Queen to his constituent parts in order to build him up the hero he can be.

With Green Arrow: Rebirth #1, Mr. Percy will continue the story he has crafted that will carry Oliver into DC’s “Rebirth” event. Mr. Percy spoke with me recently about where Green Arrow finds himself at the beginning of Green Arrow: Rebirth, why he approached Oliver’s story as he did, and how real-world events will inform his work on the series.

FreakSugar: All of the details behind Rebirth are still unknown to most of us, but I was wondering if you could tease where Green Arrow finds himself at the beginning of Green Arrow: Rebirth #1?

Ben Percy: When I took over with issue 41, I was deliberately keeping Oliver Queen out of costume. I wanted to emphasize him as a man; a man who was struggling emotionally, professionally, financially, romantically.

He goes through a kind of existential crisis. Over the past few issues, Green Arrow has been taking over. By the time we hit Rebirth, he will have finally lived up to that heroic mantle. Green Arrow will have taken over and become the centrally defining characteristic of Oliver Queen. 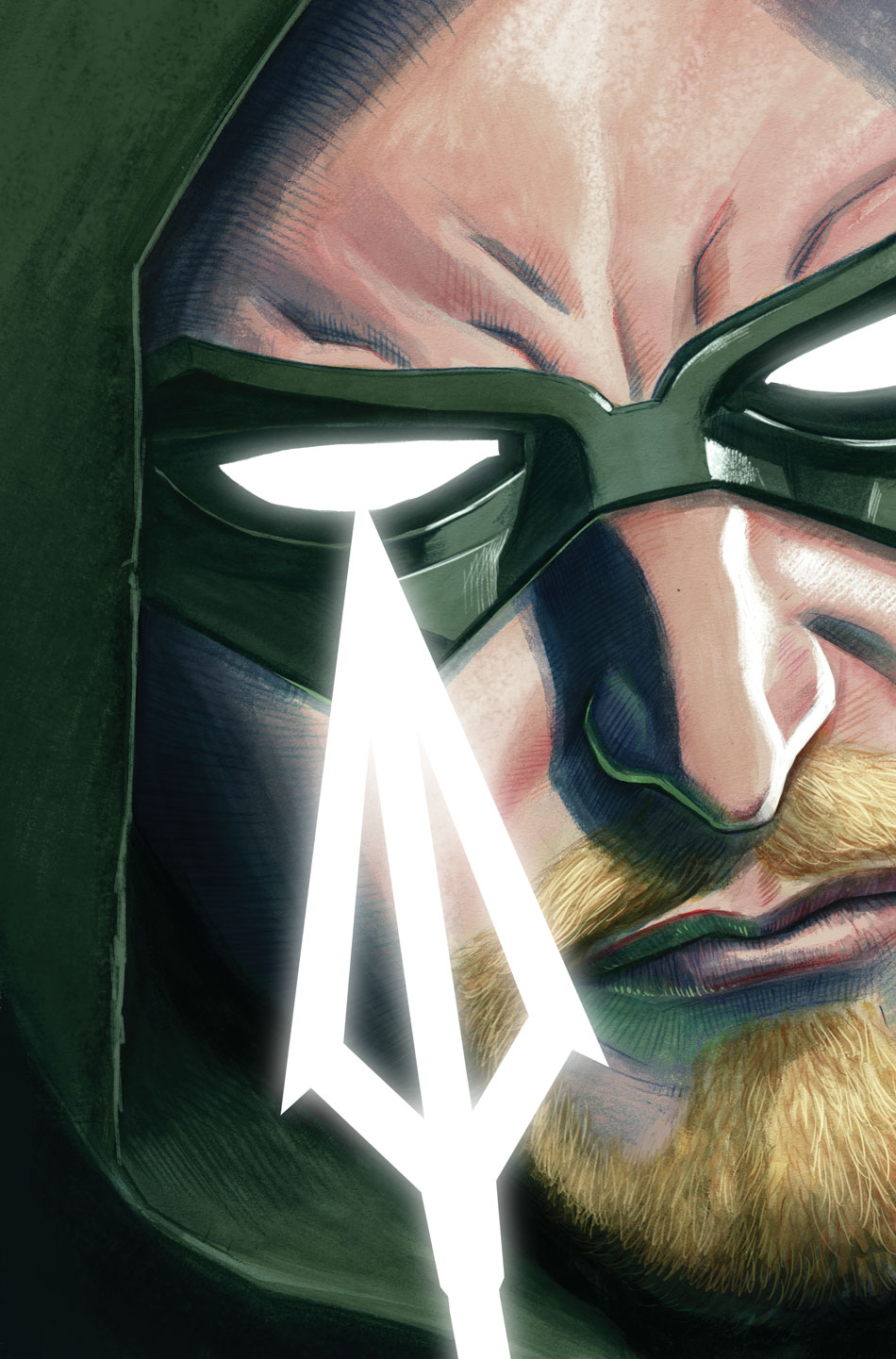 FS: What I like about what you’re doing is that you took your time and had a measured approach with laying the groundwork for Oliver’s hero’s journey.

It’s a total thrill to be able to tell Green Arrow stories, in part because I’ve built all of this scaffolding. I wanted people to be angry at Oliver early on. For instance, I wanted them to feel that he was being a bit of a cad romantically so that when Black Canary shows up, the readers will really appreciate the relationship that cements between them. They’ll recognize the cavity that has existed in Oliver’s life prior to this. 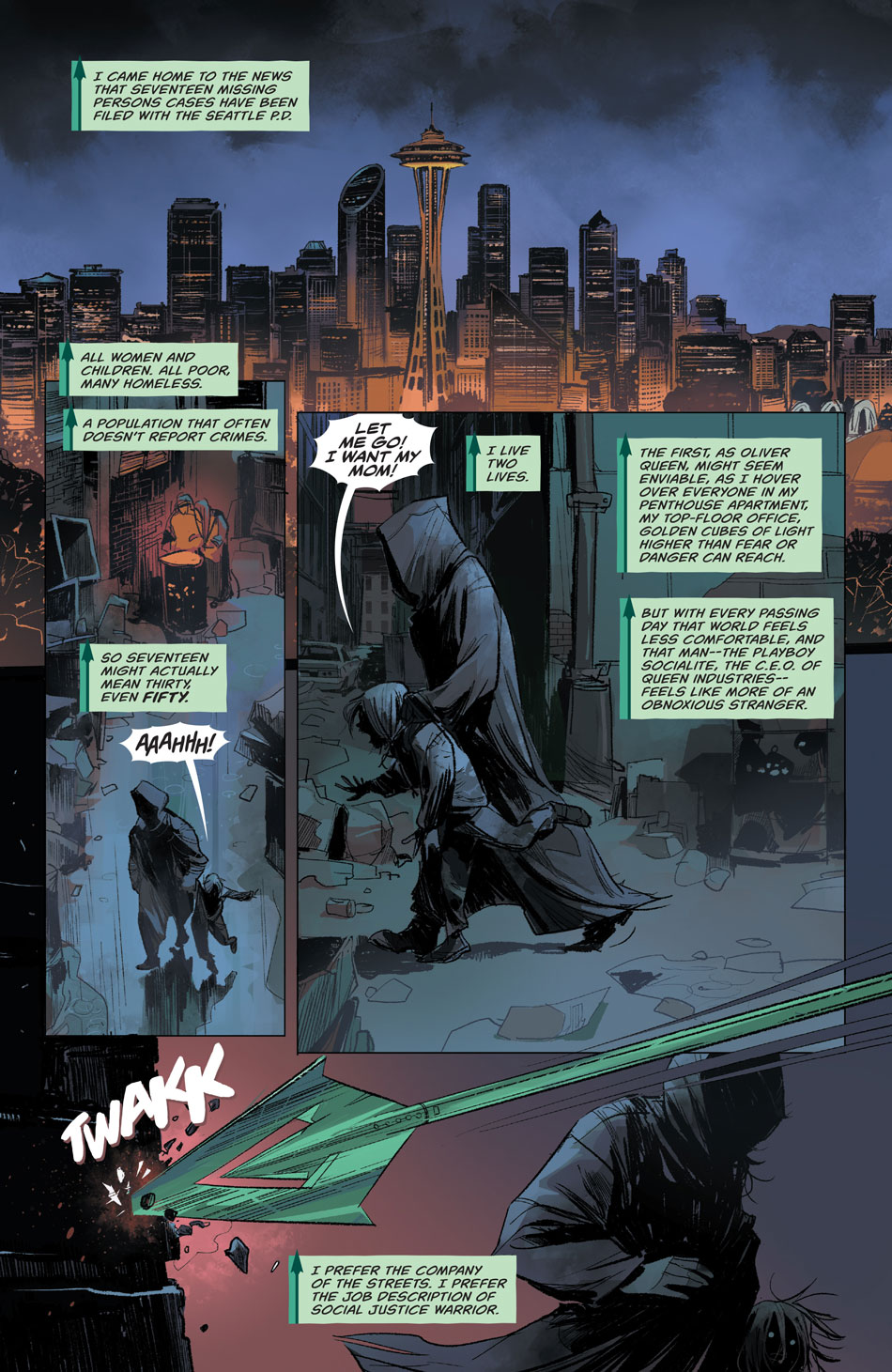 FS: I read in an interview that you gave when you first started writing Green Arrow that while Oliver wants to be a hero and stay on the hero’s path, he’s human and sometimes strays. I appreciate that about what you’re doing with the character.

BP: I mean, who the Hell knows what we want to do or who we are when we’re 25? Especially with the weight of all that responsibility on his shoulders. I knew a lot of fans would resist it, but I wanted to make him uncertain, to keep him away from his quivers as long as possible. I wanted to show somebody who was lost so that would matter when he eventually found his path. 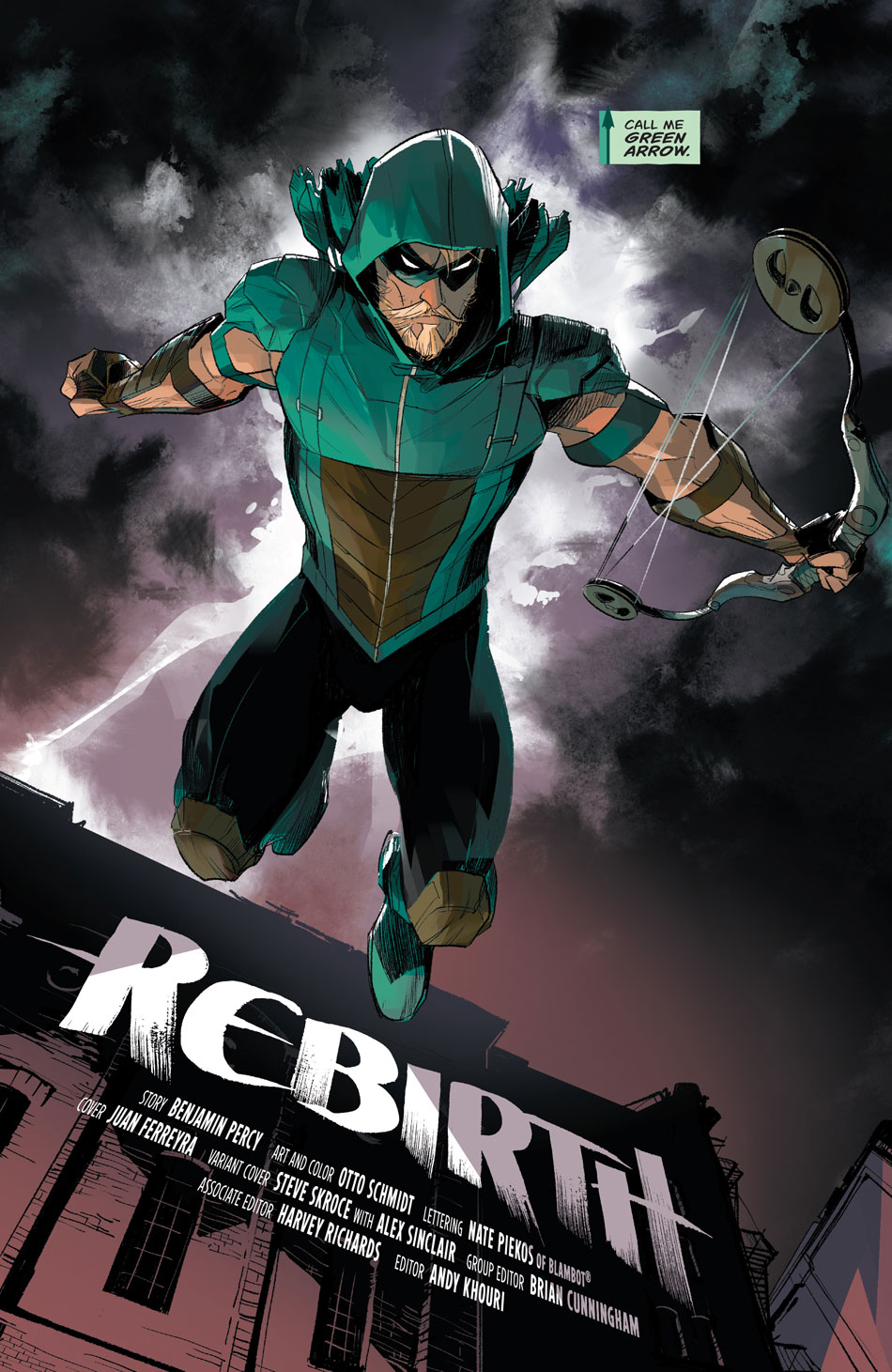 FS: Are there characters or aspects of Oliver’s world that you haven’t had the opportunity to explore while on GA that Rebirth will give you the chance to tackle?

BP: I should say that this Rebirth storyline comes from months of planning. It began with a 25-page pitch and from there, I flew out to Los Angeles and worked with Geoff Johns and Brian Cunningham in the writers’ room. We asked ourselves, “What is the greatest, most kickass Green Arrow story we could tell? What is the core of the character’s canon? How can we tip our hat to that and move forward in the future?”

This is, I hope, my “Court of Owls” [writer Scott Snyder’s first Batman story arc]. I will say that there is an organization—and I will say this in as forbidding voice as possible—known as the Ninth Circle. [laughs] Oliver and Black Canary will face up against. The Ninth Circle, of course, being a reference to Dante’s “Inferno.” 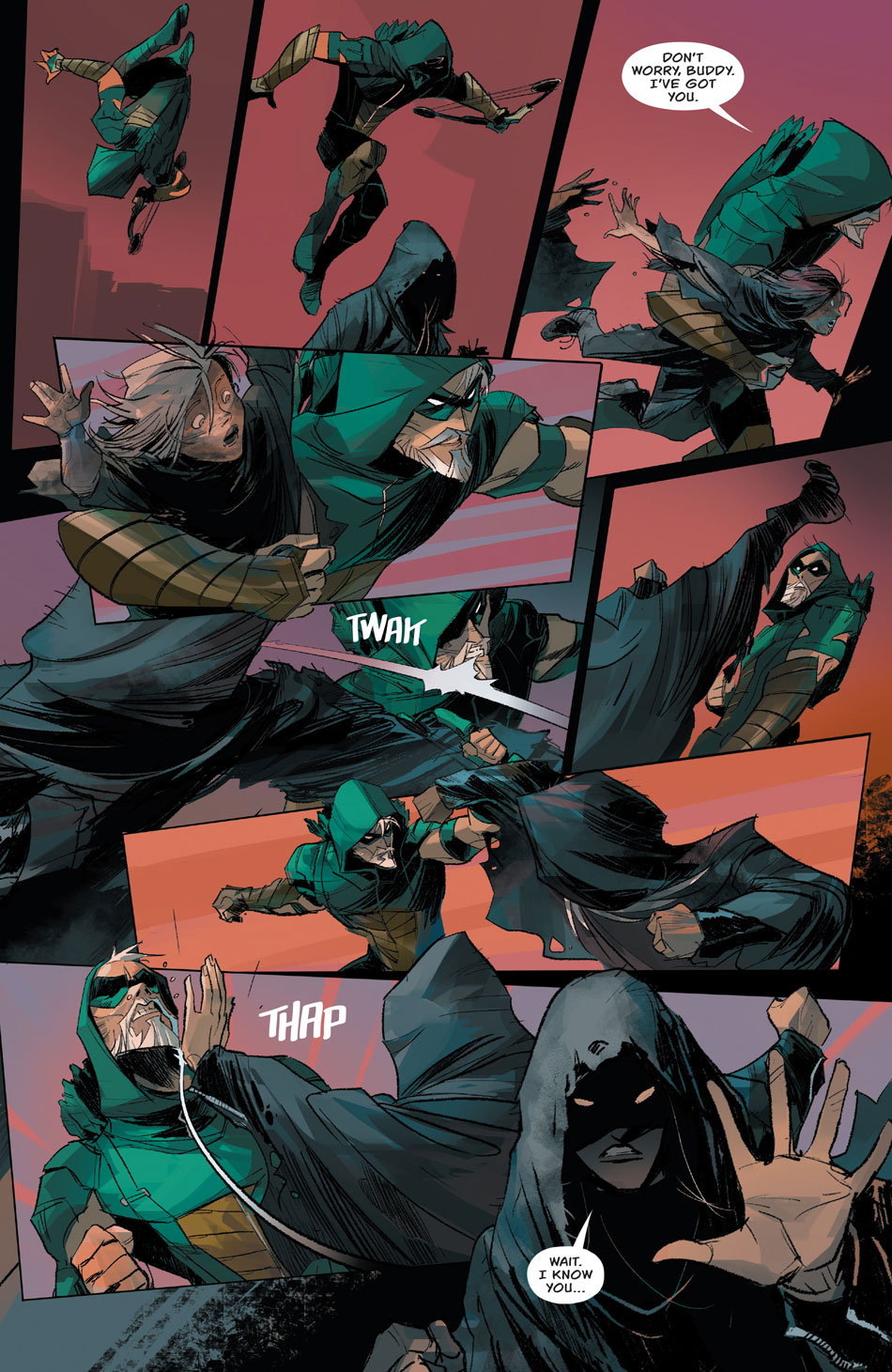 FS: Can you tease anything about that without getting into trouble?

BP: They’ll take us both into a field and shoot us in the head. [laughs]

I do want to say something about the artists that they’re bringing and how they contribute their talents to the series. Otto Schmidt is a wonder. His lines are so clean. He brings such dynamic movement to the page. Such arresting visuals.

And Juan Ferreyra. They’re equally talented, but they have very different aesthetics. Juan’s art is beautiful, but very unsettling. Check out his work on Suicide Squad to get a barometer of it. He does these two-page, multi-panel spreads which will become his signature in Green Arrow. It’s cinematic the way he lays out the page. We’re thinking carefully about which stories suit which artists. 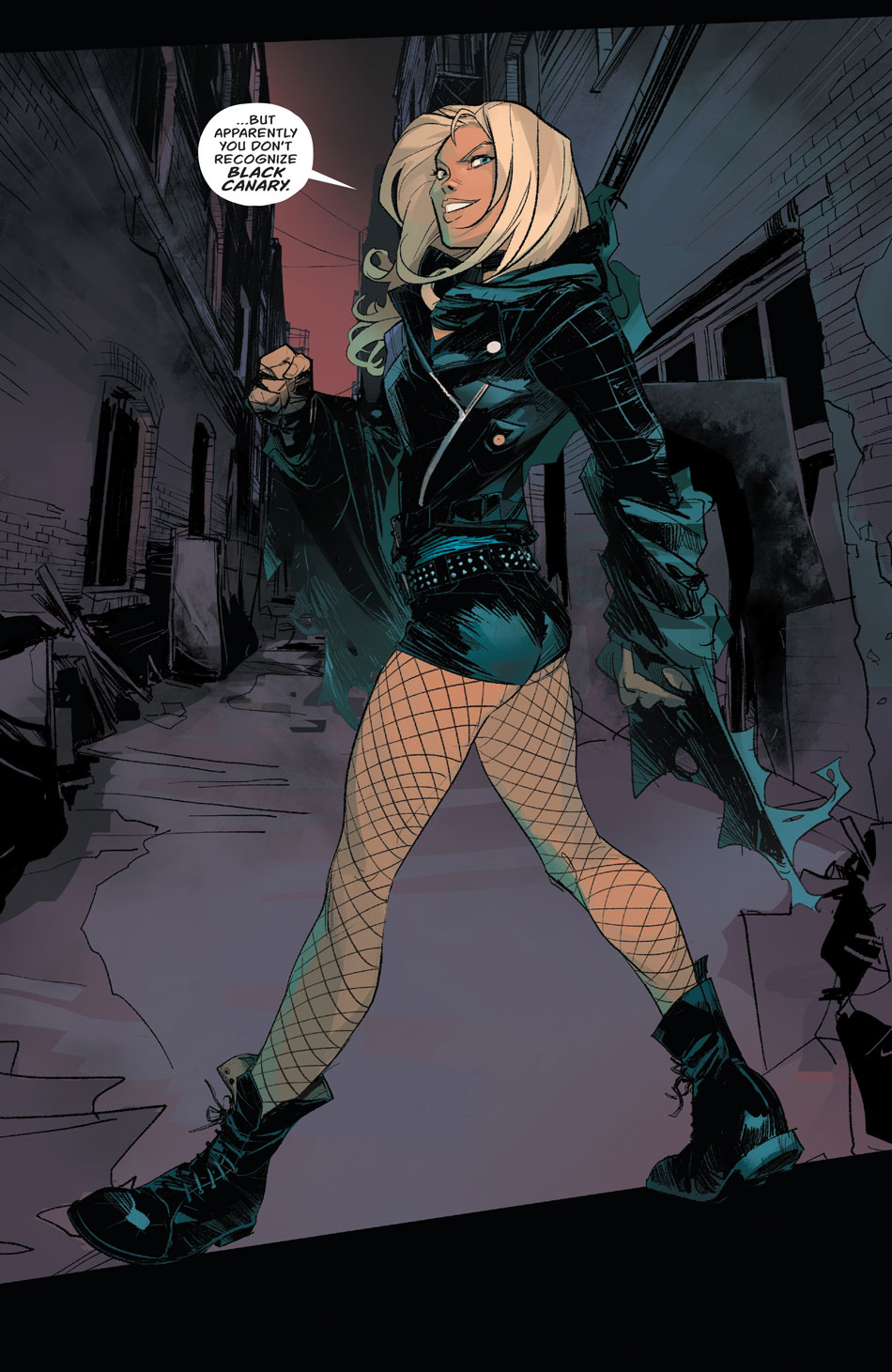 FS: Overall, what is it about Green Arrow that appeals to you in writing the character?

BP: He’s a social justice warrior. He’s channeling cultural unease. That’s been lost from the series, but I’ve been bringing it back. It’s at the fore of my intentions. I’m using Mike Grell and I’m using Denny O’Neill as my touchstones. If you have been paying attention to the news over the past six months or so, you have seen headlines we’ve been considering funneling into the series. In other words, Green Arrow is the zeitgeist.

The thing I’ve struggled with since taking over is his billionaire status and it’s something I’m going to remedy. The pull quote from the first trade will inevitably be “How can fight The Man if you are The Man?” That’s something Black Canary asks him. And Green Arrow has lost his fortune before, but this is the first time he’s been complicit in that loss. If you think about what’s going on in this country right now, the swelling chasm between the 1% and the rest of us, I’m wrestling with that.

Green Arrow: Rebirth #1, written by Ben Percy with Otto Schmidt on art, is on sale June 1st from DC Comics.

Together again for the first time, the Emerald Archer meets Black Canary. Questioning everything Green Arrow believes in, Dinah Lance throws the hero’s world upside down, forcing him to question what he cares about more: his morals or his money?

BULL’S-EYE: “Readers are aching for the reunion of Green Arrow and Black Canary, and we’re finally going to give it to them.” says writer Benjamin Percy. “Also returning? Green Arrow’s goatee.”