A new gameplay trailer for Bungie’s next big thing has finally dropped, shedding some more light on exactly what the hell is going on with this sorta MMO slash sorta small squad shooter. Pop your eye holes just a little north to watch the new Destiny trailer.

Basically, it’s a short side quest featuring a few of the Destiny soldier-mans facing off against several bad alien Fallen to secure an important pod of some kind. These Strike missions, as they’re called, give the impression that they will be smaller and quicker in scale and pace — perfect for a quick break between longer sessions. At any rate, the team blasts their way through a bunch of the Fallen, finds the McGuff-O pod, and then takes out a few more waves of enemies. It really just looks like a prettier Borderlands if you ask me. Maybe that’s exactly what it is. Guess we’ll find out more during E3. OH! and a Beta is set for sometime during the summer for gamers who dance the pre-order boogy.

On top of that, an exclusive vehicle will be waiting with your pre-order at GameStop. Power Up members will have access to this sleek speederbike dealie called the Sparrow. I’ll admit it’s pretty neat but you know how these exclusivity deal go — it’s cool until everyone else has one or you find your first real mount and forget all about ol’ Sparrow there. Anyway, if this is something you absolutely have to have, I’m sure GameStop is willing to oblige. 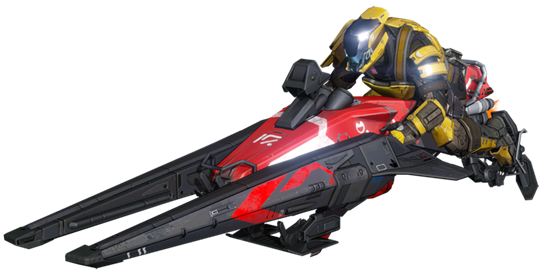