Every artist who has provided art on IDW’s Jem and the Holograms has always enriched the rocker crew’s universe with unique and rich linework. and Jen Hickman is no different. Hickman is handling art duties for Jem and the Holograms: Infinite, a three-part miniseries that will crisscross with Jem and the Holograms: The Misfits to tell a reality-hopping tale of the assembled glamorous and glittered musicians. Jem, the Holograms, and the Misfits find themselves on an alternate Earth in which that world’s Jem and her cohorts rule are using the very Synergy hologram tech that allows Jerrica Benton to become the pink-haired rocker Jem. Our Jem and company are co-opted to liberate the alternate world, with the Misfits pulled into the mix as well.

With Jem and the Holograms: Infinite debuting this week, we spoke with Ms. Hickman about how she approaches working on the book, the collaboration process with series writer Kelly Thompson, and blazing new ground in the sci-fi heavy “Infinite” crossover.

FreakSugar: First of all, congratulations on joining the Jem family! Do you have any early memories of experiencing Jem and the crew from the original cartoon series?

Jen Hickman: Thank you! I’m delighted to get to be a part of this. TV was not a part of my childhood, so I missed out on not only the original Jem cartoon but basically every other show that people my age watched growing up. I was, however, excited to discover it as an adult!

FS: I love your style because, although it still very much fits with the Holograms’ world, there’s a kinetic vibrancy about your linework that make the comic pop. How do you approach working on the book?

JH: Jem has a much lighter, colors-driven feel to it than the kind of stuff I gravitate towards on my own. So placing large areas of black when I ink, something I normally rely on, doesn’t work so well. I feel really lucky that Sarah Stern is coloring the book, because I know that the wide-open, light pages I’ve been doing will be spun into absolute gold in her hands.

FS: Following up on that, Jem has such a fun, bright vibe to the characters’ tales. Is there a particular headspace you have to be in or any music you listen to in order to get into a Jem state of mind?

JH: You know, I didn’t do this consciously, but I did end up listening to a ton of Fall Out Boy, Panic! At the Disco, Paramore, and similar while I drew pages- really high-energy stuff that showcases emotional highs and lows in a somewhat vulnerable way. So I guess I was tapping into that spirit for Jem– it’s also music that is a little cringey with how on-the-nose it is, but you gotta love it for being so blunt? And I don’t know that the Jem comics have to be interpreted that way, but now that I’m connecting it up, I guess I do.

FS: Were there any particular Jem characters that you were excited to tackle during this story arc?

JH: The close bond between the sisters is something that really grabbed me about Jem and the Holograms, and I was incredibly excited to get to draw the deep, caring relationships they have- even when the Holograms are fighting with each other, at their core they always have each other’s back.

Also- it took me a number of attempts to put a Techrat on the page that I was happy with! I was really struggling to figure out his character, especially since he comports himself a little different than how we’ve seen him in the past. He became the most fun one to draw. He is a huge contrast with the polish and charm of the rest of the Jem cast, and that endears him to me. 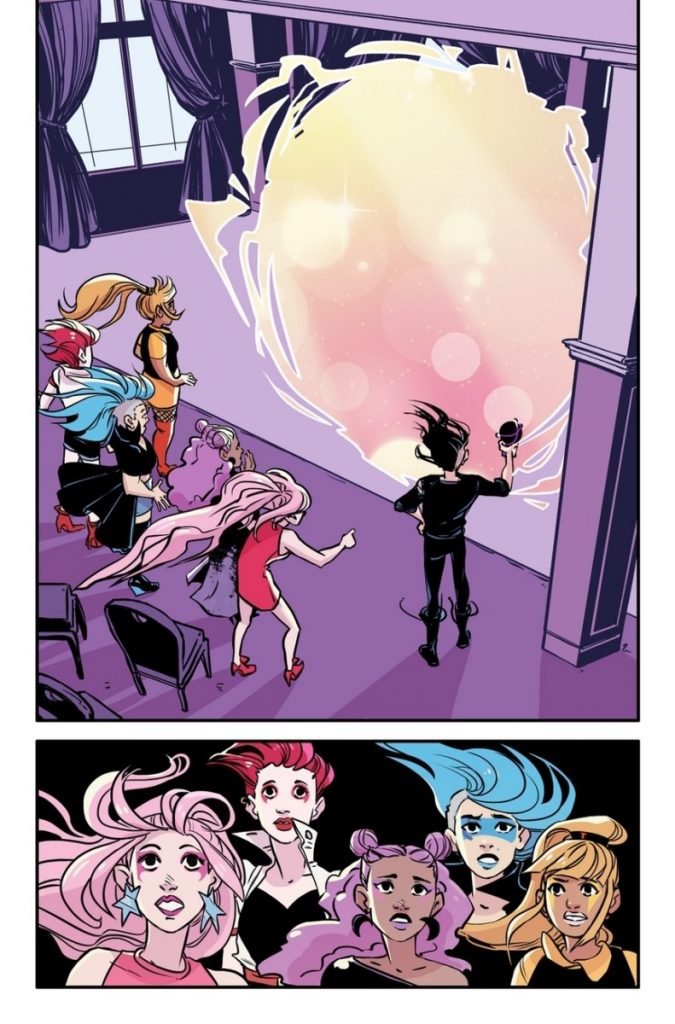 The Holograms and Techrat about to reality-hop in JEM AND THE HOLOGRAMS: INFINITE #1.

FS: What’s the collaborative process been like with series writer Kelly Thompson?

JH: Working with Kelly has been awesome, and I do also want to heap praise on Sarah Gaydos, our editor, for facilitating that and being an all-around rock star. Kelly’s scripts are clear, and by and large I know exactly what I want to draw for each page- something that is kind of hit or miss for working with a writer, in my experience. Every now and then I’ll want to change something minor, and Kelly is generally okay with that. It feels really, truly collaborative, and I’ve enjoyed that.

FS: You’re going into uncharted Jem territory with “Infinite,” with the focus so much on reality-hopping. Is it exciting to being the first Jem artist to blaze new ground like that? Is there something you’re getting to draw you never expected to have the chance to draw in a Jem story?

JH: It is really exciting! I am a sci-fi junky, so getting to bring that into Jem is really fun for me. There’s a moment in issue 5 -that I don’t want to spoil- that I am SO jazzed to draw. Basically, a character that I had assumed was gone from the Jemverse makes a fabulous second appearance, and the way that resolves and transforms the story is going to be visually, just, the coolest. Assuming I pull it off, at least!

FS: A silly question I always have to ask the Jem crew: If you were going to adopt any Jem character’s style, who would it be? For me, my answer has always resolutely been Stormer.

JH: Stormer’s got great style! This is a tricky question, since my personal style has always been defined by some variation of, “can I outrun the zombies in this?” so anything that restricts movement is right out. Though now that I think about it, Pizzazz’s get-ups would probably convince the zombies to leave me completely alone, which would be way less work than outrunning them. That outfit Sophie Campbell designed for her at the end of volume 1, with the saw blade earrings, would definitely do the trick!

FS: After your work on Jem and the Holograms: Infinite wraps, do you have any projects coming down the bend you’d like to tease?

JH: Too many projects! Writer James Maddox and I are going to finish up a mini-series we’ve been working on called The Art of the Kill, which is about a collision between the worlds of organized crime, serial killers, and fine art. Then Pat Shand and I are doing a horror book together called Shut Eye, about a sleep-deprived college kid who discovers evils both human and otherworldly lurking in the shadows of her school or possibly her mind. We’re going to be kickstarting that in January of 2018.

Jem and the Holograms: Infinite #1, written by Kelly Thompson with Jen Hickman and Stacey Lee on art, is on sale now from IDW.

The FIRST-EVER Jem/Misfits Crossover Event begins here and now with “INFINITE PART ONE!” Now a happy quintet, Jem and The Holograms are stronger than ever, which is a good thing because they’re about to embark on an adventure unlike anything they’d ever imagined possible. After a public fight with The Misfits at a charity event, a strangely dressed Techrat shows up and takes them to a whole new world… literally. And it is going to change EVERYTHING.

Related: The Theme Song to Jem and the Holograms Given Dazzling Update