“Jem: The Misfits #5 is a gorgeous concoction of the sweet and the salty, just like we like our Misfits, and the creative team could not have let the rockers belt out a more glorious and rebellious song to cap off the series.” 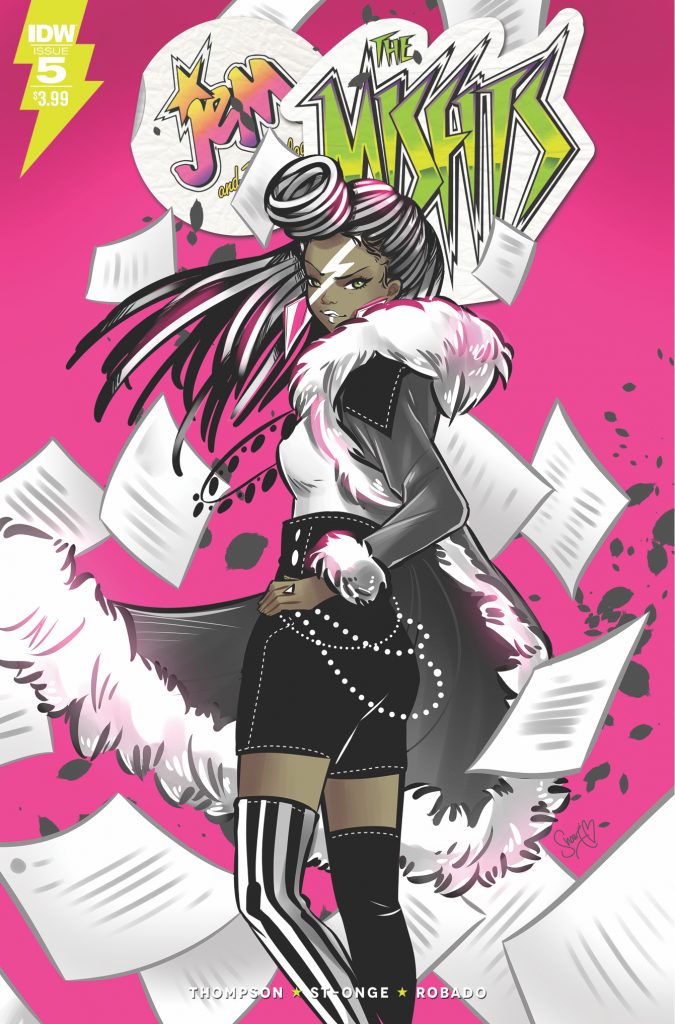 Issue 5 focuses largely on the fallout from last issue, with the revelation that Jetta’s real name isn’t Sheila Burns, nor is she even British! The Sheila persona was one the woman once known as Prudence adopted after leaving her family following her beloved mother’s death and living under the restrictive upbringing of her aunt. Sheila/Jetta allowed her to pursue music and put distance between herself and a life that never fit her once she came under her aunt’s watchful eye. She explains to her fellow Misfits that she laid this information to bare for their reality show’s producers to give them a story rather the one they were ready to highlight: that of Roxy’s illiteracy, which the producers were primed to use for TV fodder. And on top of all that, we see a resolution to whether the Misfits will be signing with a new music label in the near future. 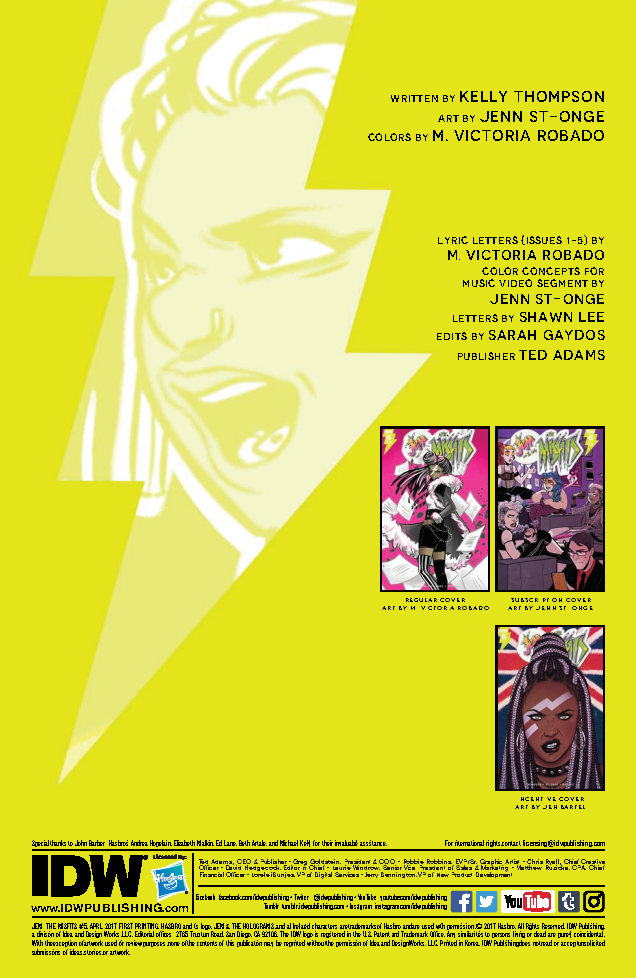 While the issue does a good job at wrapping up some lose threads from Jem and the Holograms and Jem: The Misfits with an eye toward the Misfits’ future, Thompson does an exceptional job at exploring the character of Jetta and dissecting why she would choose to reinvent herself to such an extent. It’s interesting how many parallels there are between her character and the Holograms’ Jerrica Benton: The impetus for both stems from a need to move beyond insecurities that have held them back from blooming to some degree. There’s a feeling that who Jetta transformed herself into might have been who she would have become had her mother lived and she hadn’t been under her aunt’s oppressive thumb. As much as the Jetta persona is a way for her to move past childhood trauma and grow into someone who was more authentic—even if that authenticity was built on falsehoods—Thompson’s depiction of that transformation isn’t too far off from what we do as people every day. We are all works in progress, and sometimes we lie to ourselves to get to greater truths about who we are. That Thompson is able to fit in that sort of commentary in an issue that is also so ebullient and fun without being weighed down with the life lesson underneath the surface is phenomenal. 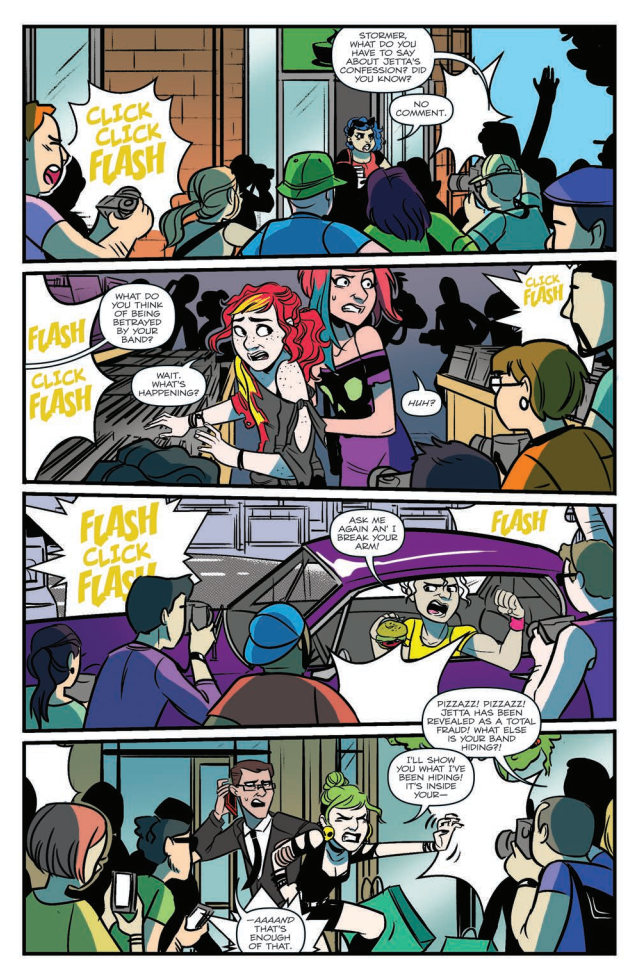 It’s difficult to know what to say about St-Onge’s linework that hasn’t been said already, but I’ll say it all the same: The artist is one of the biggest revelations I’ve come across in recent years, and I’ve done my best to scour her body of work to find anything I can get my hands on. In regard to Jem: The Misfits, what makes her renderings so impressive is that while you can clearly see St-Onge’s fun style shining through in page after page, she adds an edge to the characters that’s needed to sell the various Misfits band members’ hardcore aesthetic, without letting that edge overpower the characters’ personalities and internal emotions. In Pizzazz in particular, we see her face shift from irritated to irate to sympathetic, with St-Onge using a judiciousness and efficiency in deciding when to add facial lines and when to hold back in a way that’s not always easy to pull off. That she can adapt her lines to such a degree to serve the story while still allowing her style to shine through is a testament to her nimbleness as an artist. St-Onge continues to be a comic artist to watch. 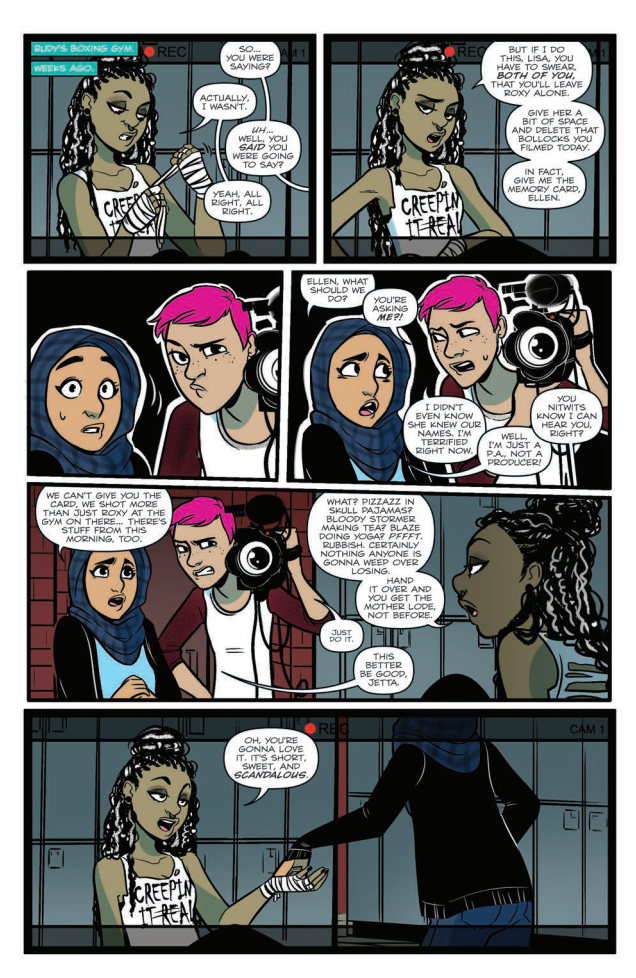 Adding to St-Onge’s eye-candy artwork, Robado demonstrates once again why the Jem universe owes her a tremendous debt. The world of the rival rockers is one of vibrancy, and Robado certainly knows how to add that play in her colors. However, with a book such as Jem and the Misfits, there’s a certain mutedness to the palette that’s necessary to sometimes distinguish that the Misfits and the Holograms, and Robado knows when to pull back from the vibrancy and brightness just enough to sell the Misfits’ innate badassery. 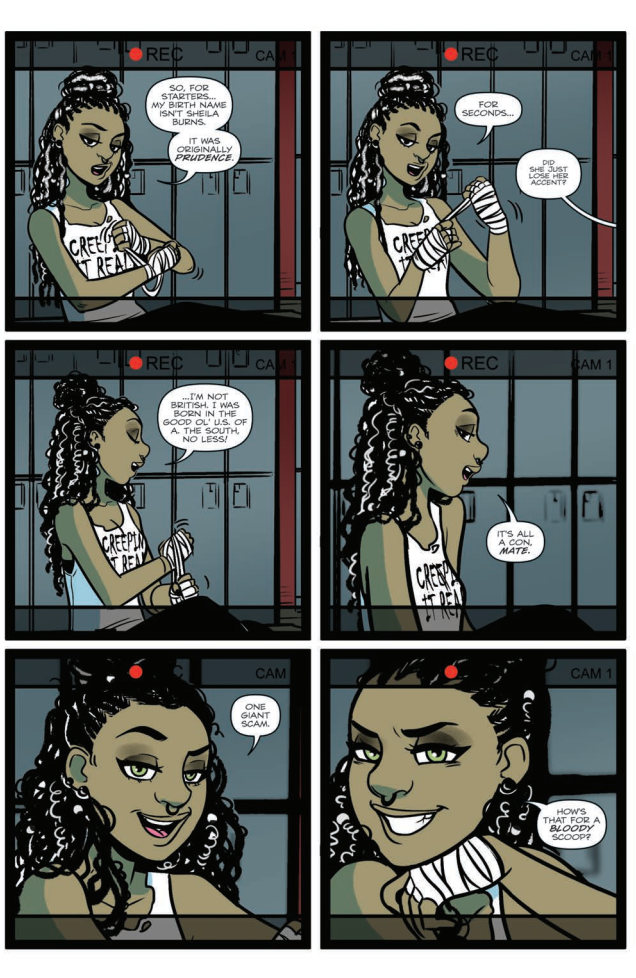 Reflecting on the series as a whole, one of the things that I always appreciate about Thompson’s writing—whether she’s writing Jem or Hawkeye or A-Force—is that she obviously has a real desire to delve deep into personality and motivation, peeling back the surface to show us facets of a comic’s cast in a way that haven’t been explored, yet fits into what we know about the characters in retrospect. This is especially seen in how she has added depth to the Misfits, which were admittedly largely one-note villains in the original Jem and the Holograms cartoon series. Without scrubbing away any of their rockers’ edge that made them fan-favorites, in both the Jem flagship title and The Misfits, Thompson brought depth to Pizzazz, Stormer, and the rest of the band, giving us motivations behind their sometimes erratic reactions. Thompson and the various creative teams she’s paired with have transformed the Misfits into full-fledged human beings. That in itself is an accomplishment that any fan of the Jem universe should be grateful for.

Jem: The Misfits #5 is a gorgeous concoction of the sweet and the salty, just like we like our Misfits, and the creative team could not have let the rockers belt out a more glorious and rebellious song to cap off the series.

Jem: The Misfits #5, written by Kelly Thomspon with Jenn St-Onge and M. Victoria Robado on art, is on sale today from IDW.

-I didn’t mention it in the review, but the reaction the Misfits had to Roxy’s illiteracy was so damn heartwarming that the air got dusty all of a sudden.

-I love the Holograms, but I kinda want to be a Misfit when I grow up. Stormer and Jetta might be my fashion spirit animals.

-It’s nice to see Pizzazz have her spunk back. It’s been a long time coming.

OUR SONGS ARE BETTER Part Five! The Misfits Reality Show has been unearthing all of the band’s secrets since day one. Jetta’s secret is bigger than all of them, but she’s also better at keeping it. Still, when coming clean might mean saving the day, will Jetta show her true colors and save her band, or just save herself?

Review: JEM: THE MISFITS #5
Jem: The Misfits #5 is a gorgeous concoction of the sweet and the salty, just like we like our Misfits, and the creative team could not have let the rockers belt out a more glorious and rebellious song to cap off the series.
9Overall Score
Reader Rating: (0 Votes)
0.0