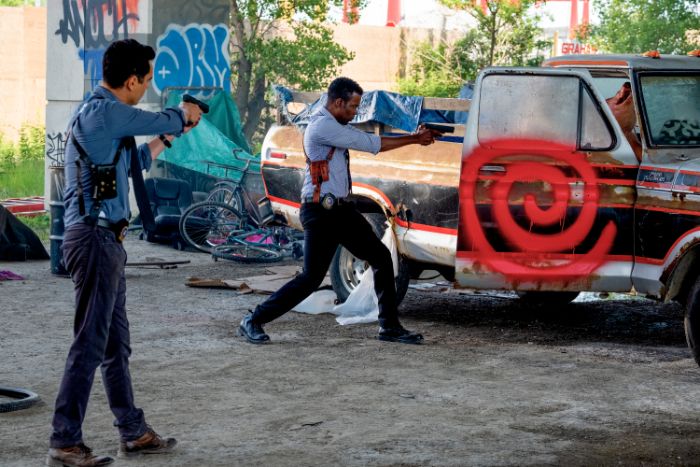 John “Jigsaw Killer” Kramer (Tobin Bell) died in Saw III, but it took five more movies to permanently bury him, narratively speaking. At a certain point, a story is going to run out of feasible flashbacks for a character who only spent a relatively short amount of time between going crazy and dying. And the Saw franchise long ago went way past that point, continuing ouroboros style with increasingly absurd soap opera twists to justify its existence. That is, of course, what some people love about the series. But after nine movies, the extremely convoluted mythology inherently keeps any new addition from being remotely comprehensible to outsiders. So after one failed attempt at a reboot that was actually just another sequel, writers Josh Stolberg and Pete Goldfinger have taken an idea by Chris Rock, and essentially reset the board. Sweetening the deal, director Darren Lynn Bousman is back, who crafted the two best movies in the saga, parts II and III (as well as the one that began the descent into sheer wankery, part IV).

Spiral isn’t exactly a reboot — it acknowledges that the events of the previous movies happened — but save for a few photos of Tobin Bell, none of the previous actors or characters are back. Even franchise icon Billie the puppet is gone, replaced by a pig marionette that’s nowhere near as instantly iconic as the filmmakers seem to think it is. And for the first time, Jigsaw’s newest heir apparent does not use Tobin Bell’s voice in any form. Only the pig iconography remains, but it’s been repurposed. Initially based on industrial music’s co-opting of Manson family imagery and language, it was retconned mid-franchise to be a reference to the Chinese Year of the Boar. Here, however, it’s simpler — it refers to corrupt police, who are the target of the newest deathtrap-based “game.”

The corrupt cops angle feels like an attempt to be as timely as Saw VI, a favorite among fans for its tormenting of a ruthless health insurance executive. But the casting of Rock, as well as Samuel L. Jackson as his police chief father, muddies the topical waters by making it clear that, as far as the film’s concerned, police corruption has nothing whatsoever to do with race or racism. When the n-word is said onscreen, it’s only by Jackson and Rock. 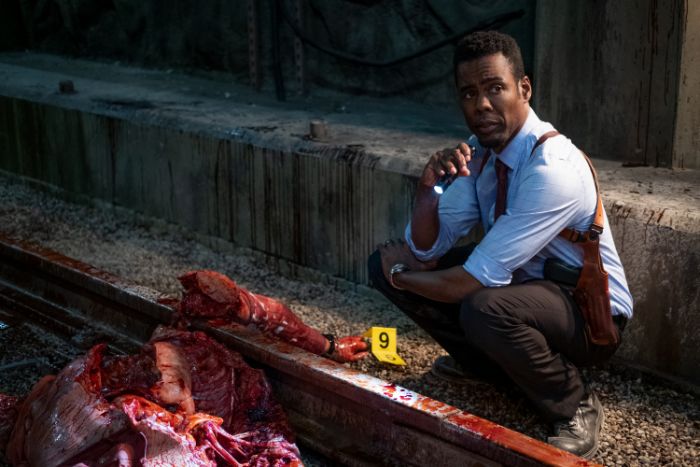 By focusing on cops, Spiral also focuses more on the investigation side than most Saw sequels, which usually split their time between the search for the killer and a larger group trap. The latter is wholly absent here, making this movie more of a police procedural than a horror movie. Frankly, this is the biggest bummer about it. Bousman delivers plenty of blood and gory corpses, but he doesn’t really let the traps play out, using hyper camera moves and cuts to keep us from getting the best look at everything. On the plus side, the traps have returned to the original idea of the punishment fitting the crime — a liar must pull his tongue out, a gunman cut off his fingers, etc.

Fortunately, Chris Rock and Max Minghella make up for the gaps in the formula by being some of the more appealing Saw protagonists to follow. Rock’s Ezekiel Banks is a detective who’s a maverick by necessity; none of his colleagues want to work with him since he busted his own partner for murder. Minghella’s William Schenk is a rookie assigned to Banks partly to punish the veteran, and partly because he’s the only guy who won’t refuse the job. Things get interesting when the new Jigsaw takes an interest in Banks, imagining him a kindred spirit in taking revenge on corrupt officers. Banks, of course, is too idealistic to accept that comparison.

Rock’s influence seems to have emboldened the screenwriters to try some Tarantino-ish dialogue. Above and beyond getting Samuel L. Jackson to say all the bad words he’s known for, they also have Banks opine at length on Forrest Gump, and in a too-cute throwaway, mention New Jack City, a movie Rock costarred in. There’s even a visual nod to Pulp Fiction that the cameras focus on at least three times to ensure we get it. At times Rock feels like he’s trying too hard to be tough, but he relishes playing with the dialogue, and his interplay with Minghella gives the story more character than usual. (The last few Saw protagonists have been so forgettable I couldn’t tell you their names, or actors.) Charlie Clouser scores the movie once again, but this time we get a bit more hip-hop alongside the industrial, including a rap song sampling the signature, climactic “Hello Zepp.” Industrial music isn’t as big as it was, and adapting to an urban crime milieu isn’t the worst choice in the world for a narrative shift. 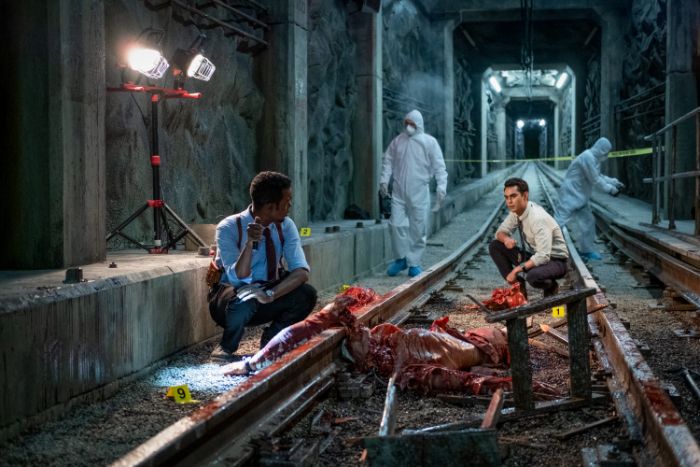 Saw fans by now have a good sense of what a given movie is showing you, and what it pointedly isn’t, and will likely guess the movie’s big reveal before it happens. Some might resent that, but I appreciate it. It shows the movie is playing fair, and not pulling a Scream by throwing out 80 different red herrings and telling every actor to play it as if they’re guilty. Regardless, the ending is one of the most satisfying the series has had in a long time, and certainly allows for more. My guess is that if the movie’s grosses in any way disappoint, Lionsgate will take a page from that other overly convoluted franchise, Fast and Furious, and bring back whichever characters are canonically still alive from previous installments to take on the new Jigsaw. Offhand, I think only Cary Elwes would add much value, but it’s not…inconceivable.