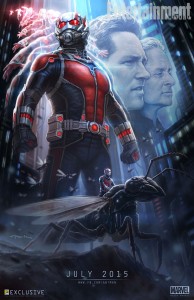 The amount of news coming from this year’s SDCC keeps growing rather than shrinking. (Yep, that’s how I chose to begin this article about Ant-Man. Sorry, but I used up all my growing/shrinking material on an article about The Atom a week ago. Deal, y’all.) Entertainment Weekly released concept art for 2015’s Marvel Studios superhero film Ant-Man that was drawn exclusively for Comic-Con weekend. The art features someone—either Scott Lang (played by Paul Rudd) or Hank Pym (played by Michael Douglas)—in the Ant-Man suit growing from his diminutive size. (Both Lang and Pym have taken the role of Ant-Man in the Marvel comics.) Also featured in the poster are Rudd and Douglas in profile, along with Ant-Man riding, what else, an ant. (Hence the name. That and the shrinking, I suppose. Two—TWO!—two allusions in one!)

Ant-Man has been steeped in director turnover the past few months. Edgar Wright, who directed Shaun of the Dead and Hot Fuzz, was originally tapped to helm the film until they parted ways over the direction and artistic sensibility of the movie. Then Adam McKay, director of Anchorman: The Legend of Ron Burgundy and Step Brothers, was in negotiations to take over for Wright before pulling out. Current director Peyton Reed, who is best known for The Break-Up and Yes Man, is now in charge of the Ant-Man machine. McKay is not entirely out of the picture, however, as he is reworking Wright’s original script for the film.

The official synopsis for the film has also been released: “Armed with the astonishing ability to shrink in scale but increase in strength, con-man Scott Lang (Rudd) must embrace his inner hero and help his mentor, Dr. Hank Pym (Douglas), protect the secret behind his spectacular Ant-Man suit from a new generation of towering threats. Against seemingly insurmountable obstacles, Pym and Lang must plan and pull off a heist that will save the world.”

The poster for the film has me jazzed in a way that early news of Guardians of the Galaxy did many months ago. The care that Marvel Studios seems to be putting into the film highlights the care it is putting into shining the spotlight on its lesser-known characters.