When the New God Darkseid, frequent foe to the Justice League, died during the “Darkseid War” storyline currently running through the Justice League series and various one-shot stories, many of the Leaguers, including Superman and Batman, were granted godhood in the process.

On the other hand, something quite different happened to young Billy Batson, who, as the hero SHAZAM, is powered by his own pantheon of deities. With Darkseid’s passing, Billy became the “God of Gods,” in the process his connection to the astral beings who normally power Earth’s Mightiest Mortal. In a mad dash to protect his young avatar, the Wizard who watches over Billy made deals with other gods to take the places of the originals. However, not all of those deities have Billy’s best interests in mind, as we see in Justice League: Darkseid War: SHAZAM #1.

Writer Steve Orlando recently spoke with me about how he chose which gods to include in Billy’s new pantheon, why the Wizard made the choices he did, and why Billy’s will can never be bent by any deity. [Caution: Spoilers ahead!]

FreakSugar: In the past, the gods that powered Billy-as-SHAZAM have been benevolent ones or, at the least, didn’t attempt to stymie Billy or overtake him. What was your process in deciding the personalities of these new gods in his power pantheon?

Steve Orlando: The whole idea of SHAZAM is an agreement that the Wizard had with the other gods to lend their might to Billy so that he could be something more. The Wizard cares about his avatar. These are gods that the Wizard has vetted and has a relationship with.

But the key with the new powers of SHAZAM, especially at the beginning of the issue, is that the moment that Darkseid dies, Billy’s connection to those gods is cut. And that’s an opportunity. Like any father or father figure, the Wizard just wants to make sure that Billy isn’t vulnerable. But the Wizard doesn’t have time, so it’s a mad dash to find new gods to protect Billy and to give him the might that he needs in the midst of this battle.

So, SHAZAM goes from just being this agreement that the Wizard has created to something about necessity. In the process, you see that not all gods are good gods and not all gods are altruistic. The first couple of hours, you see this adjustment period where it’s a matter of making these gods work together. Everyone has their own agenda. On the other hand, it’s a moment to show that no matter what the gods think or where they stand, SHAZAM is about Billy Batson. And it goes back to the name. No matter if the gods think they’re doing Billy a favor or think they’re in control, SHAZAM is Earth’s mightiest mortal. So the whole concept is about Billy giving a gut-check to these enormous, powerful, astral beings.

That’s Billy. He’s a kid who’s going to say what he thinks and isn’t going to let anyone push him around. There are these enormous beings who have been coerced and strong-armed by the Wizard to become the new SHAZAM. It’s all about gods and mortals, fathers and sons. The Wizard doesn’t have time to do things like he normally would in choosing the new pantheon, so Billy has to jump in there to remind the gods who’s in charge.

FS: Touching on what you said about Billy’s strong-willed personality, another striking thing about the Billy we see here is that, while he has a streak of teenage rebellion, he knows enough about his powers that he feels comfortable in knowing what they can do, the capabilities of the staff, and so on. Not that past interpretations of the character show him as incompetent, but this is a Billy that seems more assured in his knowledge. Is that a fair assessment?

SO: I think that he is very confident in himself. At the beginning of the book, he didn’t know where his powers came from, so the news that the gods had been powering him was a revelation. But what Billy can do as a kid who has only really had himself to depend on the majority of his life is that he knows how to think on his feet. That what gives him confidence. It’s not about knowing what these new gods are and what his powers are. It’s about a kid who doesn’t be alone or be a loner, but at the same time, he knows he’s going to be okay. So whatever faces him, he’s been a hundred bad roads before, with people manipulating him and using them to their own ends and living vicariously through him. He’s done with that. He’s never going to let that happen again.

Billy is a kid who thinks on his feet and no matter how dark the situation, he knows he’s going to get out of it because he’s always been able to take care of himself. That’s where you’ve seen him since his start in the New 52. Even if a situation looks bad, he is independent, he’s confident, and even if it’s going to be a hard run, he knows he’s going to make it out of it. Of course, whether that’s always the case outside of his mind, that’s the eternal question. Certainly one god in his mind disagrees. Ultimately, though, Billy doesn’t care, no matter how powerful that god is because no one is going to tell Billy what to do. And no one’s going to tell him he’s not going to make it. Even if things look bad, he’s going to keep trying. 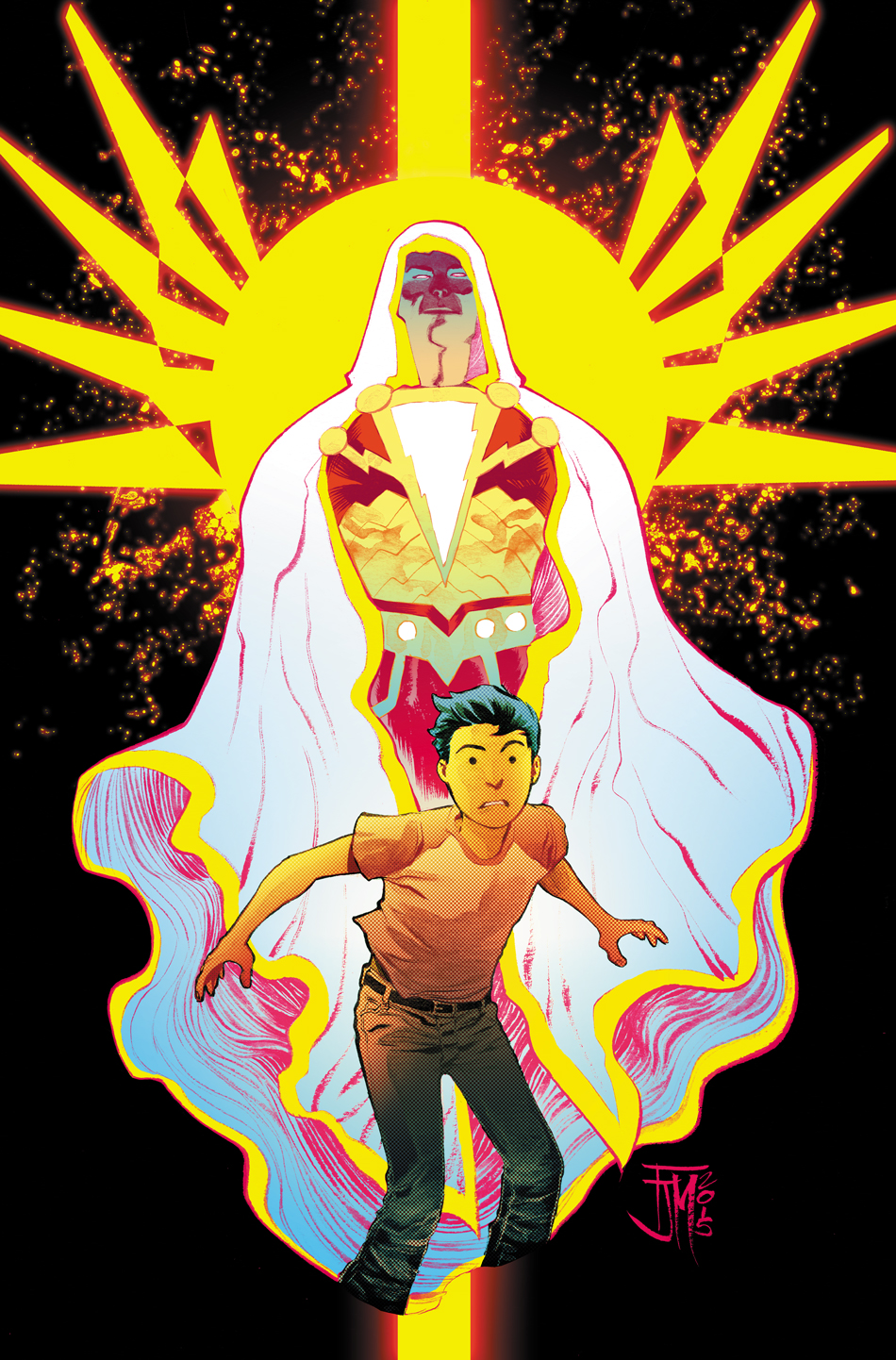 FS: Going into this, was there a specific god you really wanted to include in Billy’s new pantheon? For instance, I love that you included Shiva into the mix. I was wondering what the process was picking and choosing which deities to use.

SO: There’s certainly one I had a burning desire to use that I was a fan of since I was younger. But, all in all, what was important to me was to pick gods who broke the paradigm that was established with Billy’s previous pantheon. That pantheon was this altruistic group sitting on the sidelines and giving Billy powers and not having an agenda. I analyzed gods throughout different religions and took a holistic view of the roles they play in folklore. You see that in pantheons all the time. It’s not just Thor, it’s Loki. It’s not just Orion, it’s Kalibak.

If we’re making Billy this man with the power of the gods, I wanted there to be conflict and to not make it easy. Not all gods get along. Not all gods are good by nature. So when picking out who was going to be in there, I thought it would an opportunity to talk about the roles gods play in our monoculture and in ancient folklore. I thought we could look at how the gods bounce off people and what we look to them for. Going back to Norse culture, you could just sit and have a beer with Thor. I think there needs to be a look at gods who have the personalities we have. That means that you have gods who are greedy, gods who are jealous, gods who are vengeful, gods who are self-serving, compassionate, impulsive.

Those are the things that sort of show that a god just doesn’t have to be a guy who shoots lightning. When you dig into the roles they used to play, especially in polytheistic cultures, there really was a god for nearly everything. So picking them out and mashing traits and things where they clash and putting them in Billy’s head, that’s what was interesting to me.

FS: Also, for folks who are paying attention, there are nice winks to Justice League lore, particularly Martian Manhunter and a god he references often. It’s nice to see that nod to the idea that the DC Universe is wider and more varied than we know.

SO: Thank you so much. That was a major thing I wanted to get across. It’s easy to be ethnocentric or species-centric, but everyone has gods. What you just said was something I was shooting for.

FS: At the end of the one-shot, we see a very different status quo for Billy. Do you know if this is something we are going see moving forward?

SO: Without knowing what exactly is going to happen, he still has the powers at the end of the book and we certainly wouldn’t upset the status quo without exploring it for a while and what it means.