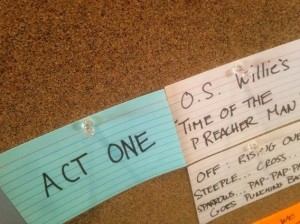 Seth Rogen posted this photo on Twitter yesterday. While the picture seems a bit innocuous, fans of the comic book Preacher immediately recognized Willie Nelson’s “Time of the Preacher” for what it was: the wheels are moving to making a Preacher television series a reality.

A few months ago, Rogen, star of Funny People, This Is The End, and Knocked Up, announced that he and Evan Goldberg, his friend and writing partner, would be adapting the fan-beloved and critically-acclaimed DC Comics/Vertigo series Preacher for television for AMC. For those of you who haven’t heard the gospel, Preacher tells the story of Texas reverend Jesse Custer, who becomes bonded with an angel/demon offspring named Genesis. With this bonding, Jesse acquires a power he calls the Word, which allows him to make anyone do his bidding with just the sound of his voice. Through his connection with Genesis, Jesse discovers that God has left Heaven to roam the Earth. With his ex-girlfriend Tulip O’Hare and Irish vampire Cassidy at his side, Jesse sets out on a quest to find God and make him accountable for abandoning his post, his responsibilities, and his creation.

Preacher is the comic book series that I credit with getting back into reading comic books after a long hiatus. Its exploration of morality, religion, the nature of faith, feminist theory, what it means to be human, and the ideal of America spoke to all of my sensibilities and interests. It didn’t hurt that the characterization, humor, and action were almost always pitch-perfect. While I might have thought that the content and subject matter of writer Garth Ennis and artist Steve Dillon’s tale might have been a better fit at Showtime or HBO, AMC has had such phenomenal success with adapting the comic book series The Walking Dead for television that I’m confident that the network will treat the stories and the characters with the respect and care fans are expecting.

With this new tantalizing morsel tweeted to the world, I decided to revisit the top five storylines that AMC and the team of Rogen and Goldberg should include in the television series. (Warning: major SPOILERS ahead.) 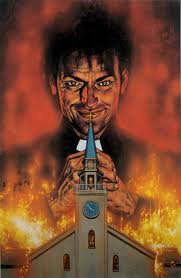 This is the storyline that sets up the quest that will carry Jesse Custer, a moral and rough-and-tough Texas preacher, and his companions through the entirety of the series 66-issue run; namely, searching for God and demand answers for his desertion. As mentioned above, Jesse learns of God’s dereliction of duty through his bonding with the angel/demon hybrid Genesis, which gives Jesse the Word, a power to command others to follow his will using his voice. While coming to terms with this information and reuniting with ex-paramour Tulip, Jesse must contend with the Saint of Killers, the embodiment of Death in cowboy garb who has been dispatched by Heaven’s angels to put down Jesse and Genesis. Along the way, the book’s trio of heroes meet Arseface, whose face, as Cassidy proclaims, “looks like an arse”. (If you’ve never read Preacher and you’re still on the fence, that sentence alone should make you run to pick up the series.) I started reading Preacher while I was an undergrad student in Kentucky, majoring in anthropology and religion. This comic made my heart sing in a way few had managed to do in a long time.

Highlight of the arc: Seeing Jesse face down the Saint of Killers, knowing that it might mark him for dead, cements what brass balls our protagonist has and will use throughout the course of the series. 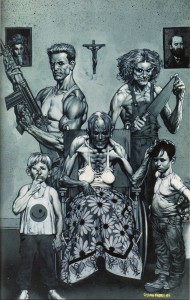 We all have family problems, but nobody does family trauma like Jesse Custer. In “All in the Family,” Jesse and Tulip are kidnapped by Jesse’s religious zealot of a grandmother and we learn how he was forced into the ministry against his will. We also get a peek into the early days of Jesse and Tulip’s courtship and how Jesse was wrenched from Tulip’s life by Jesse’s grandmother and her henchmen. Unable to use his power to escape his grandmother’s clutches, Jesse falls into despair, until Jesse’s spirit animal in the form of John Wayne coaxes Jesse to saddle up and wreak revenge on his fucked-up family. Later, in “Hunters,” readers are introduced to Herr Starr and the Grail, which protects the bloodline of Jesus Christ. Dissatisfied with the inbred descendant of Jesus that the Grail would usher out to ring in a new paradise on Earth, Starr secretly pursues Jesse, unknown to the Grail’s leadership, to use him as a more suitable King of Kings. Cassidy pretends to be Jesse, however, and is captured by Starr and his forces. The religion nerd in me rejoiced when I first read about the Grail in Preacher and made connections to the myths of the Holy Grail. Ennis knows his mythology.

Highlight of the arcs: Few confrontations in comic books left me as emotionally satisfied as seeing Jesse dispatch with his father’s killer with his own bare hands, without using his power. 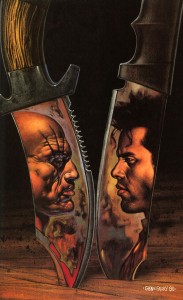 In an effort to rescue Cassidy from the clutches of Herr Starr, Jesse travels to France to Masada, the Grail’s fortress compound and central base of power. Cassidy is tortured by Italian Mafioso Frankie the Eunuch once Starr discovers that Cassidy is not Jesse, but an immortal vampire. While at Masada, Starr attempts to convince Jesse to become the Grail’s messianic stand-in, but to no avail. The Saint of Killers tracks Jesse to Masada, promising to spare Jesse’s life if Jesse can use Genesis to access memories to learn what happened to the Saint’s family, who were murdered over a hundred years prior. Jesse has the opportunity to talk to Genesis’ angelic father, who has been held captive by Starr deep in the dungeons of Masada, and learns how Genesis was created. Starr makes a play at usurping the role of All-Father of the Grail, pushing the morbidly obese leader out of a helicopter and onto the inbred descendant of Jesus, killing them both. Starr destroys Masada and becomes the new All-Father, while Jesse finds Cassidy and escapes the chaos and destruction. If you want to see a body count in a comic book that more than surpasses that of the Joker, marvel as the Saint of Killers dispatches the scores of Grail foot soldiers. The mass of carcasses obscures the Saint’s body as keeps shooting his Colts at the throngs of Grail infantry. Also: Herr Starr gets his head carved into the shape of a tallywhacker, so that’s good, lowbrow comedy right there.

Highlight of the arc: The aforementioned massacre wrought by the Saint is pretty damn impressive, but watching Cassidy get revenge on an incapacitated Frankie the Eunuch is a close second. 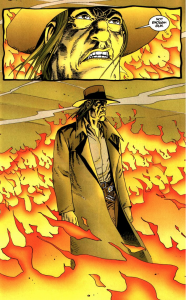 This is the point in the tale of the Reverend Jesse Custer and company where Everything Changes. Jesse, Tulip, and Cassidy head to Monument Valley, Utah, in the hopes of accessing Genesis’ memories in his quest to find the Almighty. However, the band of God hunters find Herr Starr, now All-Father Starr, and the Grail, armed with a host of United States Army soldiers at his command, waiting to capture them. Further serving to wrinkle Jesse’s plans is the Saint of Killers, who has tracked down Jesse to discover what Jesse learned about the fate of the Saint’s family. This convergence leads to an all-out massacre of biblical proportions, leaving the relationship between our heroes forever changed. Also: an atomic bomb.

Highlight of the arc: Wanna know how much of a badass the Saint of Killers really is? His reaction to having a nuclear warhead dropped on him: “Not enough gun.” Baddest of all the asses. 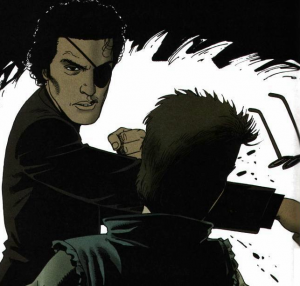 All roads lead to the Alamo in this final story arc of the series. Having discovered that God is afraid of both the Saint of Killers and Genesis, Jesse sets out orchestrating a plan to rid the world of God’s oppressive grip on humanity, as it is revealed that God has only created humans to feed on their love for him. Jesse has also learned that only the Saint and Genesis have the power to dispense with God once and for all. For God to feel comfortable returning to Heaven, however, Jesse must die, which would release Genesis from their mutual bond. According to a plan made with the Saint, when God feels safe returning to Heaven, the Saint will be waiting for him, standing between God and the throne of Eternity, the source of God’s omnipotence. Along the way, Jesse has his final showdown with Cassidy, hoping to dole out justice for how Cassidy treated Tulip when Jesse was presumed dead. Herr Starr uses the Grail to make a play at exacting revenge on Jesse Custer for the mutilations visited on Starr during his time contending with Jesse. Whether humanity, love, and friendships can be salvaged are all answered in the series’ action-packed, gut-wrenching, and thought-provoking climax. When I first read this final arc, I digested them in the form of monthly issues, not in a collected paperback, so I was dying waiting for each new issue to hit the comic shop.

Highlight of the arc: There are so many, but, for my money, three scenes from the last issue of the series still give me goosebumps: 1. the fear in God’s eyes when he encounters the Saint in Heaven, realizing the chickens have finally come home to roost; 2. the Saint finally earning his rest, slinking into God’s throne; and 3. Jesse and Tulip riding off into the sunset. Also, any book that begins with a Bill Hicks quote earns major bonus points in my eyes.