Since Marvel Studios announced that its films would be working toward an all-out, battle royale with the Avengers and the Guardians of the Galaxy facing the Mad Titan Thanos (played by Josh Brolin) and his Infinity Gauntlet, fans have been speculating and wishing and hoping and praying that an as-yet unseen key character from the Infinity Gauntlet comic book tale would be popping up in Avengers: Infinity War. However, despite that character’s importance to the story of Thanos and Marvel lore, there’s been no hide nor hair seen of that cosmic protector of reality.

However, in one of the five credits scenes at the end of Guardians of the Galaxy Vol. 2, which opens nationwide today, we get a hint that said hero might be popping up sometime in the near future. Obviously, spoilers ahead if you haven’t seen the film.

In Vol. 2, Star-Lord and his band of asshole heroes manage to rankle a whole slew of folks, including the golden-skinned High Priestess Ayesha (played by Elizabeth Debicki), leader of the Sovereign. By the film’s end, she has lost much in her quest to wreak havoc and revenge on the Guardians for their sleights against the Sovereign. During one of the aforementioned credits scenes, Ayesha vows that the Guardians of the Galaxy will still know her wrath, declaring that she is creating the perfect weapon to wield against the crew. As the camera pans to a gilded cocoon, Ayesha states that she will call the person within “Adam.” 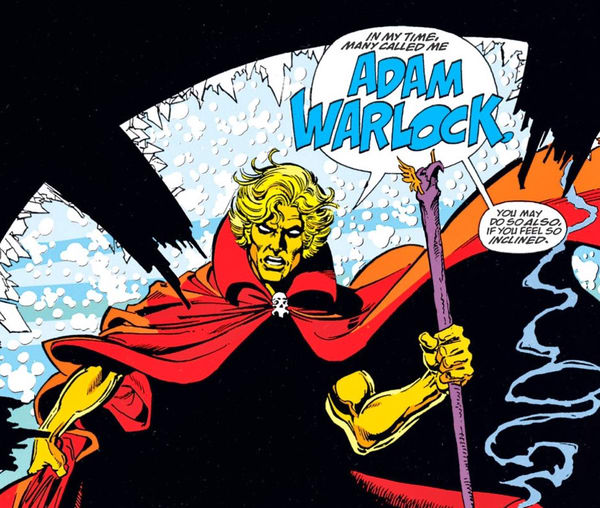 Why is this significant? Comic fans know that the Adam she is referring to is Adam Warlock, who was also bred in a cocoon and has deep ties to Marvel cosmic lore. The artificially-grown character has deep ties to Thanos in the comics, first as an ally to battle the villainous Magus (an alternate reality version of Adam–long story) and later as an adversary against the purple-hued powerhouse’s mad grabs for universal domination. One such confrontation occurs during the Infinity Gauntlet miniseries, the inspiration for next year’s Avengers: Infinity War. In The Infinity Gauntlet, Adam assembles what’s left of Earth’s heroes to lead an assault on the mad man after Thanos wields the gauntlet and its assembled gems (called stones in the Marvel films) to murder half the universe’s population to please Mistress Death. Using his connection to the soul gem–which Adam once possessed in the comic and the Vision uses in the Marvel Cinematic Universe–and his knowledge of Thanos’ inner fears and insecurities, Adam and company stave off the destruction of existence and put right the natural order. 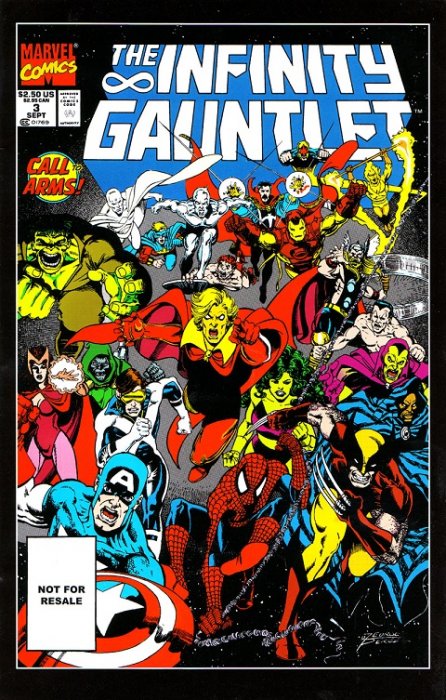 Cover to THE INFINITY GAUNTLET #3

As such, since Adam played such a lynch-pin role in the comic book source material, fans have been wondering if the golden-locked hero would pop up in Infinity War. With Ayesha’s revelation at the conclusion of Guardians of the Galaxy Vol. 2, does this mean that Adam will pop up in the forthcoming Avengers film?

Well, no, according to Guardians director James Gunn. In an interview with Slashfilm, Gunn said that Adam won’t be in Infinity War, but will play a significant role in the Marvel cosmic movie universe moving forward and will appear in Guardians 3. Hopefully, this is a bit of misdirection, as it really won’t feel like a true Thanos vs. Everyone throwdown without Adam leading the fray. As always, we will have to wait and see.

Guardians of the Galaxy Vol. 2 is now playing.