Dean Haspiel walks to the beat of his own funky drummer.  He has become a Renaissance Man of the indie scene due to his work with the late, great Harvey Pekar on American Splendor, his Vertigo graphic novel, The Quitter, and as a co-founder of webcomics collective ACT-I-VATE. He’s one of the founders and curators of Brooklyn-based electronic art salon TRIP CITY.  He has won an Emmy for HBO’s Bored to Death and  been nominated for an Eisner Award for his work on Billy Dogma. Recently, his work with acclaimed writer Mark Waid on Red Circle’s The Fox has been turning heads within the industry.

I spoke with Haspiel about his unique approach to making comics as well as his personal aesthetics as an artist.

FreakSugar: In terms of your personal aesthetics, where does your thought process go when you’re creating panels or layouts for your projects?

Dean Haspiel:  The first thing I think about is what is the story about and how can I serve that story in the art. My primary concern is to visually realize the narrative. Why is that panel on the page and how can I arrange it so it makes dramatic impact, whether subtle or loud or surreal. Bottom line, it’s about choices.

FS:  Would you care to elaborate on these choices?  Can an artist’s perception change the delivery of a script?

Haspiel:  We can both be handed the same script and design a sequence and they can both be very different yet both be right. Sometimes the layout takes me longer to do than executing the final art. Layouts is comix.

FS:  Are there techniques or tricks that artists employ to stray from the “grid” of a page of artwork?  If there are, which ones do you like to use in your work?

Haspiel:  The unique thing about a comic book page is how panels can interact and inform each other. You can’t really do that with TV and movies. So, breaking from the standard grid is part of the fun of finding your story and presenting a narrative string of mini-cliffhangers. I often look at the masters for guides and inspiration: Jack Kirby for power and action. Alex Toth for romance and noir. Will Eisner for landscape and behavior. Frank Miller for gravitas and pathos. Howard Chaykin for sets and insets. Walter Simonson for legend and scope. And, Frank Quitely for elegance and economy and his awesome sense of space and time. My studio mate, Gregory Benton, recently designed a page in his B+F graphic novel where the page circled into itself and ended in the middle of the page. That was exciting to behold. And, David Aja does some real nice stuff with pacing in Hawkeye, where panels seem to domino into mini-crescendos. Kinda reminds me a little bit of what Chris Ware does with his panel and page designs, only less coded. The thing I have to remind myself is to not get too precious. Most of the comix I’m involved in are meant to be immediately understood where pages turn briskly. If you’ve stopped to ogle the way I illustrated a pose or a prop, I’ve failed the seamless experience of reading the narrative. What takes me 2-3 months to craft should take you 10-15 minutes to register and, hopefully, relate to.

Pages from Haspiel’s work on Archie Comics’ The Fox 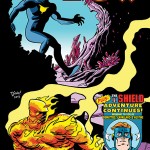 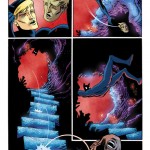 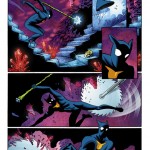 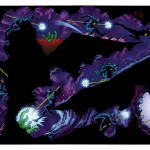 FS:  Do you focus on straight-forward storytelling in your sequential work or do you attempt to experiment with unique angles for dramatic emphasis?  Or is there a balance?

Haspiel:  I used to get tricky with my layouts because I wanted to make the process more interesting. But, sometimes, what I designed for the sake of fun confused the clarity of the story and that’s no good. As much as most cartoonists don’t like to draw a conversation, they’re necessary for the pace and dramatic build up for the action scenes. Not every panel is a peacock.

FS:  How do you challenge yourself creatively from project-to-project?  Have you ever approached a new project with the expectation of breaking with your own set style?  What sorts of frustrations can you experience as you push your own limits?

Haspiel:  Believe it or not, I don’t feel like I have a standard style. My art is the sum of my influences versus the crunch of deadlines. John Romita Jr. once said his “comics are deadline art.” I don’t think I’ve ever been given the latitude nor the time to fully explore and elaborate a comic book page. Every comic I’ve ever drawn had a ticking time bomb attached to it. I have no idea what my comix would look like given the free time. I guess that’s why I feel that my art is semi-disposable. I know it’s why I don’t sell most of my original art. I’m too embarrassed. As I get older, I regret never producing a whole story that I loved. I’ve been happy with some of my recent output but never in love. I see all the mistakes and scrutinize the choices.

FS:  What sorts of frustrations can you experience as you push your own limits?

Haspiel:  I made a hard decision a long time ago to not let the perfect get in the way of the good. I think it’s because I’ve never created a perfect thing in my life so I wouldn’t know what it looks like, anyway. I think that’s why some of my favorite art is when I draw on a paper napkin or a piece of scrap paper. I loosen up and I don’t care and I feel that’s the REAL stuff that comes out of me, naked and unafraid. Alas, unpublishable.

FS:  Are there any sorts of stimulus for artists that can facilitate “bad habits” or alter an artist’s style in a negative manner?  How do you adhere to your own sense of style without straying subconsciously?

Haspiel:  Social networking is a nightmare for making deadlines. It equally stimulates while annihilating production and often leads you down a wormhole of endless discovery. I know more about certain insignificant things than I do about my entire family and friends combined. I’m easily distracted and would rather wash dishes and mop a floor than write and draw. The process of creation can be grueling bordering on maddening. I second guess myself every step of the way and there is more erasing and editing than my soul should have to endure. My first advice to any budding creator is to run as fast and far away and get a real job. Avoid the curse at all costs because once you get a taste for it there’s no going back.

FS:  As the industry continues to develop digitally, do you feel that larger publishers are starting to prefer artists who work digitally?  Is there a traditionalist sense of pride within the field or does everyone secretly want to ditch paper and pencil for a Wacom tablet?

Haspiel:  I’m probably on the cusp of being too old and too dumb to draw digitally. I certainly employ a bunch of the digital tools to color, letter and edit my art but I still use pencils and ink on paper to draw. However, I did just buy a used Cintiq that I’m going to crack my stubborn knuckles on and see what happens. I don’t think an editor cares whether you draw digitally or not. I think what editors and publishers care more about is how is digital different and can it be more exciting.

FS:  But you have actually been fairly active digitally…

Haspiel:  What I started at Act-I-Vate in 2006 was just a platform to produce personal comix yet be seen on a regular basis. It was meant to kind of be a 24-hour resume. A way for editors and art directors to stumble across your wares and hire you. Then, I transitioned that into broader, more mixed media terms with TripCity until I realized creating and curating cool FREE content was an uphill battle. Twitter, Facebook, Tumblr, and Instagram are how people procrastinate. Nowadays, places like Thrillbent and MonkeyBrain Comics have taken the webcomix baton and started to not only monetize but revolutionize the way we read comix online. Artists like Reilly Brown are innovating the way we pace digital comix. I recently illustrated a Batman ’66 for DC Digital that took extra effort to visually narrate because of the current demands to “enhance” the reading experience. I find some of it to be hokey but I can also respect the appeal.

Covers from Haspiel’s Fear, My Dear and Psychotronic Comix 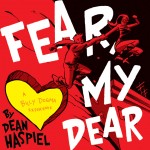 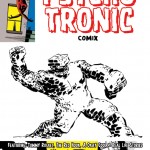 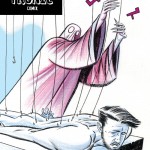 FS:  You have already listed quite a few influences from within the comic book industry.  Who are some of your outside influences?  How have other forms of storytelling and art from other artists brought more to the table for you creatively?

FS:  That’s an impressive list of influences. Closing up shop, what’s coming up for you later this year?  Which shows are you attending for convention season?

Special thanks again to Dean for burning the midnight oil to make the deadline for the launch of the site. There were no bombs attached to the deadline of this interview, we promise. You can follow Dean on Twitter @deanhaspiel