Red Range is a wild, weird, woolly, and imperfect ride, but definitely one that’s worth taking, blending genres in a way that is dizzying and delightful. 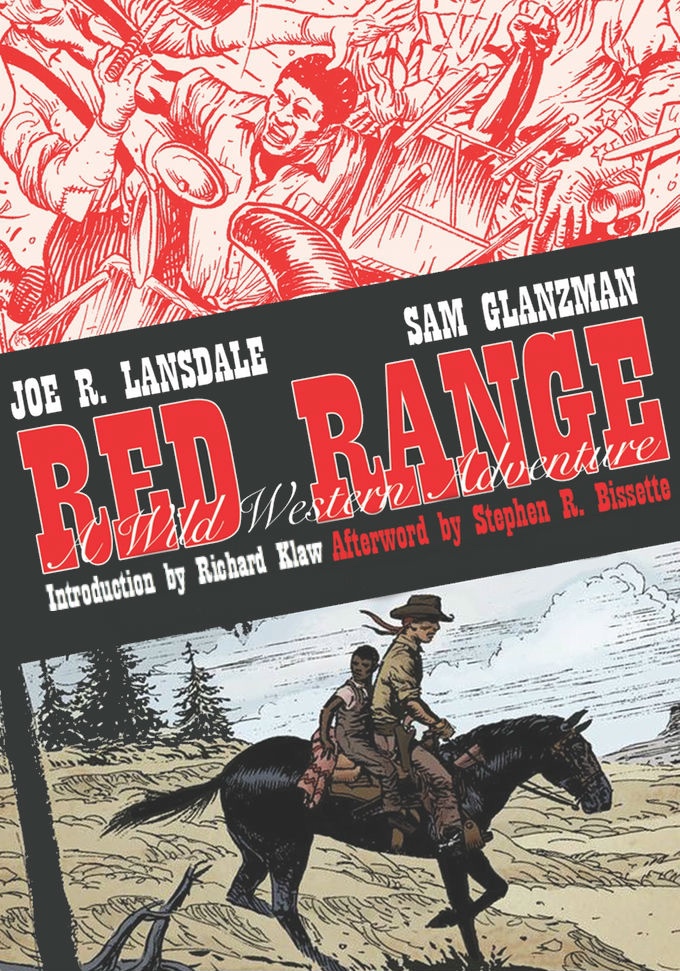 Red Range by Joe R. Lansdale and Sam Glanzman was originally published in 1999 as a black and white comic and received little real fanfare or critical appreciation despite Lansdale’s position as one of the leading splatterpunk horror writers of the day and Glanzman’s devoted comics fan base. The book has languished in relative obscurity ever since, until Eisner award nominated comics editor Drew Ford chose it to launch his new publishing line It’s Alive Press. Dedicated to reprinting and preserving out of print and historically notable comics like Red Range, It’s Alive has an impressive line-up of forthcoming titles, including Trina Robbin’s adaptation of Dope by Sax Rohmer, Sam Glanzman’s Voyage to the Deep, and Family Man by Jerome Charyn and Joe Staton.

It’s Alive’s edition of Red Range adds color by Jorge Blanco & JOK to the original work, a short western horror piece by Glanzman called “I Could Eat a Horse,” as well as an introduction by Richard Klaw (Mojo Press), an afterward by Stephen Bissette (Swamp Thing, Taboo), and historical commentary by Bissette, in a hardcover edition that, if Ford follows his usual habit, will be high quality and really well bound. The front-, middle-, and back-matter is particularly interesting for pop-culture history geeks like me who get a little too excited about the story of small publishing houses, or the history of cowboys and dinosaurs. The title story itself is… odd. The opening panels depict one of the most brutal, gory, and realistically violent lynchings that I have ever seen in a comic. This is interrupted by the African American vigilante Red Mask who proceeds to splatter the blood and brains of the white Klansmen widely with the help of a Sharp’s rifle and a double-barreled shotgun. Red Range, particularly the opening pages, has often been called hyper-violent, but I found the depictions to be realistic, and not nearly as graphic as that found in, say, many of Avatar Press’ regular titles. Still, the opening panels are a kick in the gut, particularly when you realize that what they depict is far from being among the worst historical atrocities perpetrated against African American families in the US, particularly in the late 19th century. 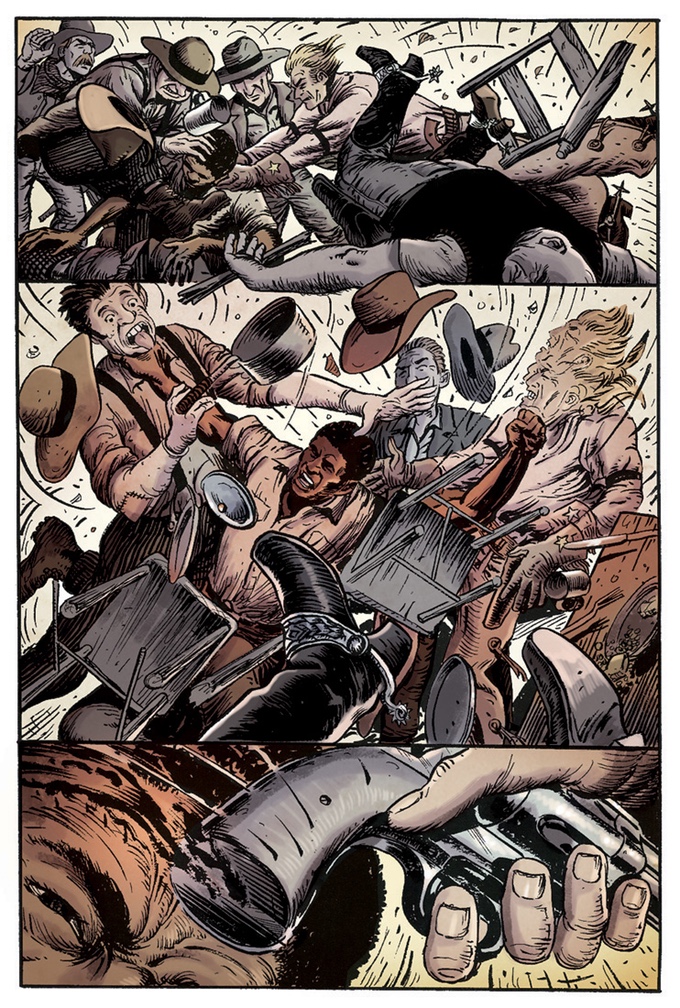 So Red Mask rescues the only survivor of the small family, a ‘tween boy, and takes him to his hide out with the head of the Klan – a typically pointy-headed, sweaty, fat man named Batiste – vowing revenge. What follows is a Wild West hunt that goes terribly wrong for the hunters. Ultimately, good triumphs and evil gets its just desserts, but along the way things are just really weird, with everyone being transported by a flash flood into a lost, underground world ruled by black men in Spanish conquistador armor, and otherwise populated by dinosaurs – including an inevitable t-rex. There is also strange strain of humor throughout the book, from basic slapstick to ruminations on the many uses of the humble chicken. In truth, a lot of the story, despite tremendous artwork from Glanzman, just doesn’t work. Even the virulent racism of Batiste is revealed to spring from a specific, horrific, and very painful assault he suffered as a child at the hands of several black kids. This scene (which is my personal favorite piece of Glanzman’s art in the book) tends to undercut the story’s effort to expose the realities of American racism by providing a reason for something that is ultimately entirely unreasonable and unreasoning. It also serves to equate Batiste with Red Mask, whose vigilante career began with the death of his wife and son at Batiste’s hands. So the tale is less about racism than revenge – on both sides. Red Range does better in its handling of racial tensions within the black community, as Red Mask and his companion find themselves condemned by the black rulers of the lost world because they are too black. This is a good lick, pointing up the damned-on-all-sides reality that some African Americans face, but taken with the problematic wellsprings of Batiste’s rage can also be read as something of a “blacks can be racists too” apologia. 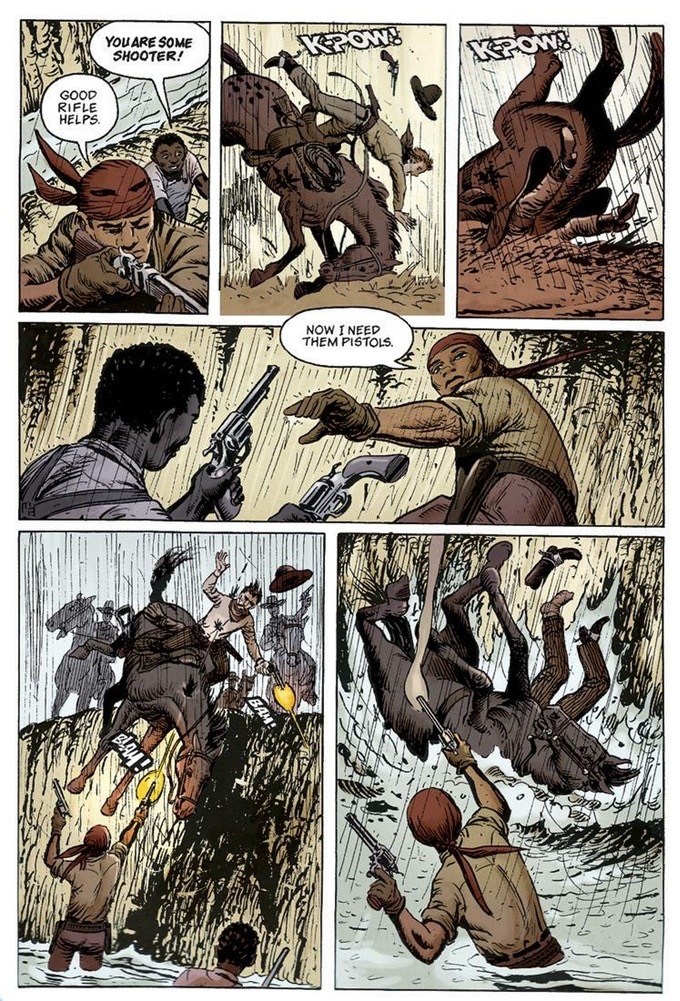 Where Red Range really shines is Glanzman’s art. Bold, dynamic, and strong, this book showcases the artist at the height of his powers. His horses stamp and blow, his people start and move, his bullets violently end lives. Yet Glanzman also shows his chops quietly, beautifully, with close ups of weathered faces that tell tales all their own of grief and hate and love and pain, each an individual entity, with single panels showing the reader a life lived in a hard land for good or ill. This is truly amazing stuff, and worth the $29.99 cover price all by itself. The book is also a testament to the western genre’s seemingly endless flexibility. A mix of horror, social commentary, comedy, and lost world fantasy, all built upon a traditional western structure, Red Range blends genres in a manner that is almost dizzying, and – despite its flaws – delightful.

In the end, Red Range’s narrative stumbles are overcome by Glanzman’s art, including the “silent” short story included in the volume, and by the contextual history provided by Bissette and Klaw. This one goes onto my shelf because it’s a wild, weird, woolly, and imperfect ride, but definitely one that’s worth taking.

Red Range will hit the shelves in June of this year, and is available for preorder on Amazon or from your local comics shop.