It’s not news that the social and political climate in the United States is becoming more and more volatile, unhinged, and scary. While racism in the United States is, unfortunately, not something new, some of the worst examples of our citizenry are feeling more and more emboldened to lurk out of their caves of anger and vitriol to espouse bigoted rhetoric in rallies and on TV. When our politicians are telling us, for example, that there are good people “on both sides” of rallies like the one that happened in Charlottesville, Virgina, last year, it’s little wonder that pockets of Nazi groups are becoming less reluctant to spew their hate en masse.

That’s why speaking out against that tide of hate is as crucial as it always has been. When our politicians won’t denounce the actions of actual Nazis, we have to make certain that we inspire one another to call out injustice and evil when we see it. That’s why projects like the Always Punch Nazis Kickstarter from Pilot Studios are so important. Born out of the frustration with the Nazi-like racism permeating the United States, Always Punch Nazis is a comic book anthology that is a satirical look at how to deal with the bigoted and black-hearted Alt-Right bottom-feeders. And unlike what Breitbart and its ilk would have you believe, APN is not a call to literal violence, but rather contains stories that are meant to inspire readers about how to respond to hate in our time.

We spoke with Always Punch Nazis story contributors C.W. Cooke and Jay Huwer recently about the idea behind the anthology, the inspiration behind the stories, and what they hope readers will get from their reading experience. 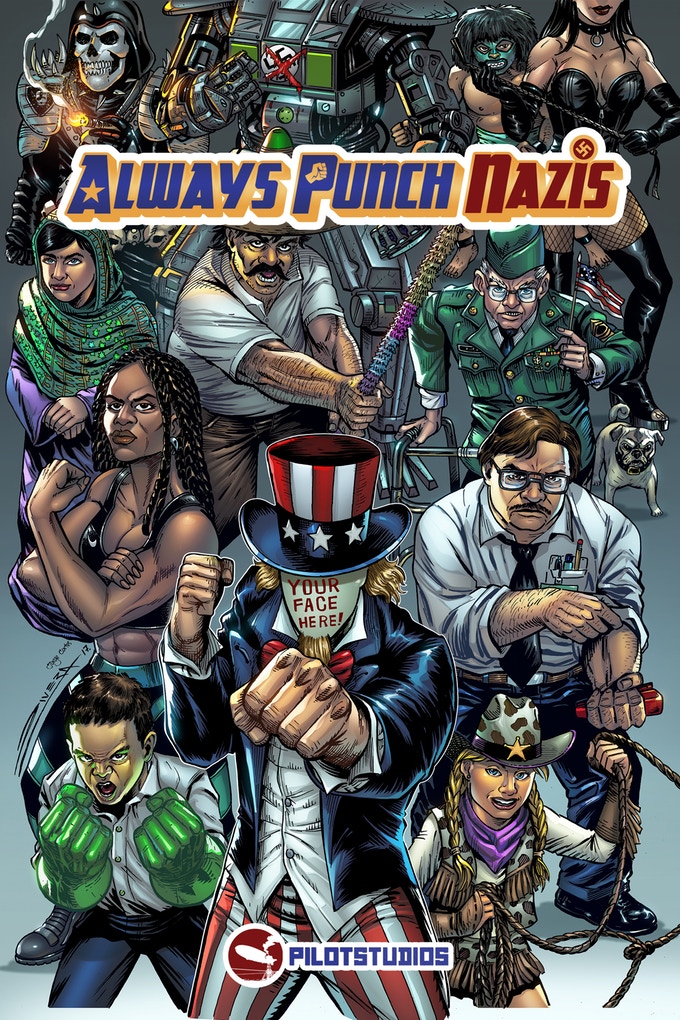 FreakSugar: For folks considering contributing to the Kickstarter, what can you tell us about the conceit of the Always Punch Nazis anthology?

Jay Huwer: Last year, [Always Punch Nazis] Ben Ferrari and Silas Dixon were appalled by the riots in Charlottesville. They felt compelled to act. Ben contacted the Pilot Studios team and challenged everyone to create a story to help educate and combat the growing racism in this country. Out of that initial conversation, Always Punch Nazis was born. As a collective, the Pilot team decided to donate all proceeds to an anti-racism group.

C.W. Cooke: Obviously at the beginning of 2017, things seemed to get pretty insane pretty quickly. And when the Charlottesville riots happened, and a certain president said there were good people on both sides, the group kind of came together all at once. I was only a part of the group on the outskirts but I knew that I had to write a story for this anthology because I’m a very vocal anti-Nazi creator.

FS: The climate in the United States is disheartening, sad, infuriating, and downright scary in terms of where we are in racism and bigotry. We’ve taken huge steps backwards of late. This anthology seems to be a direct response to that. How and what has shaped how you and the other contributors approached this project?

JH: The guidelines to Always Punch Nazis were very simple. We wanted to combat the Nazi-like racism that has been growing. That was it. From there, so many phenomenal stories came to light. Some creators took the superhero approach while others looked at racism in a community. “Turn, Turn, Turn” was me looking in a mirror. We’ve been taught to turn the other cheek when someone wrongs you. Throughout history, we tend to not interfere if the fight is not ours. Then that very fight escalates into something out of control like a civil war or world war. At some point, we need to step up and let everyone know we’ve had enough. That’s what Always Punch Nazis means to me.

CWC: I approached this project as a fan of comics and the stories that it can tell and as someone who is a brash loudmouth in my opinions on things. I’m going to sometimes get in people’s faces with the things I believe, and I feel like the whole team is aware of that. I also feel like most know that I’m not one to back down. So that’s how I got involved. I saw posts about it on Facebook and jumped into the deep end as quickly as I could, writing up my story within the next day and getting an artist involved as quickly as I could. My story is about a luchador fighting Neo-Nazis at a wrestling show, so it’s a little more action heavy but it’s also a lot of the things I wish I could do. 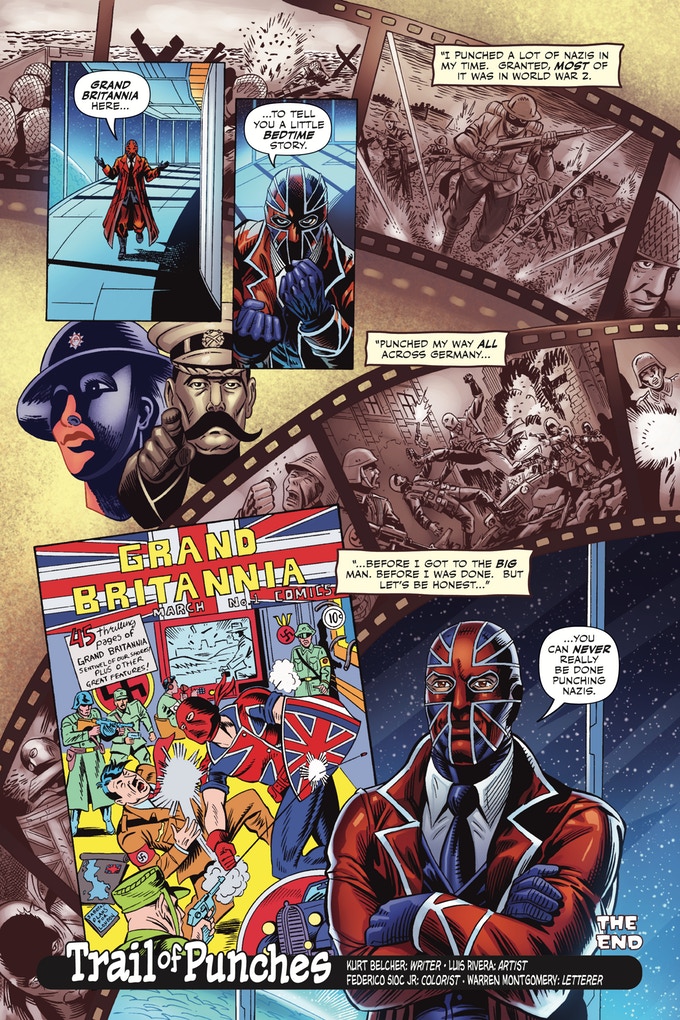 FS: Is there anything you can share about some of the other contributions in Always Punch Nazis?

CWC: By now, everyone has seen the” How to Punch Nazis” page by Chas Pangburn and some of the other work involved, including wonderful stories by Ben and Silas and Kurt Belcher. The creators all come from different walks of life and contributed their time and efforts to APN just because we wanted to tell these stories and wanted to talk about the world we see outside our windows.

FS: Being Facebook friends and following you on social media, I already had an inkling about how you felt about the current social climate in America. What do you hope readers will get out of this anthology?

JH: I hope readers will look at Always Punch Nazis as a call to arms. Obviously they shouldn’t punch anyone in the face. That notion is ridiculous. I really want the book to inspire people to voice their concerns. Don’t just sit back and let this racial uprising continue. It’s time we put an end to racism in the world. I guess you can say we should punch racism in its figurative face.

CWC: I see a lot of people arguing about things that mean nothing while others act. I see a lot of people arguing about the words to use and the way to fight back, when action seems to be the most important thing to do. So take action. This is a call to action. Not to actually punch people in the face just because you disagree with them (this is a satirical look at the world), but to do something. Vote. Protest. If you see someone being hurt or treated unfairly because of the color of their skin or because of their religious beliefs, speak up. Don’t let this stuff grow and fester.

Raising your voice and acting is what helped the most recent rally only have roughly 20-30 people show up from the Alt-Right side. That’s a start. Next time, I hope no one shows up. We want them to be scared to show their faces because of the consequences that face them. I always hope that this book provides inspiration for others to make comics and make stories that mean something to the world. 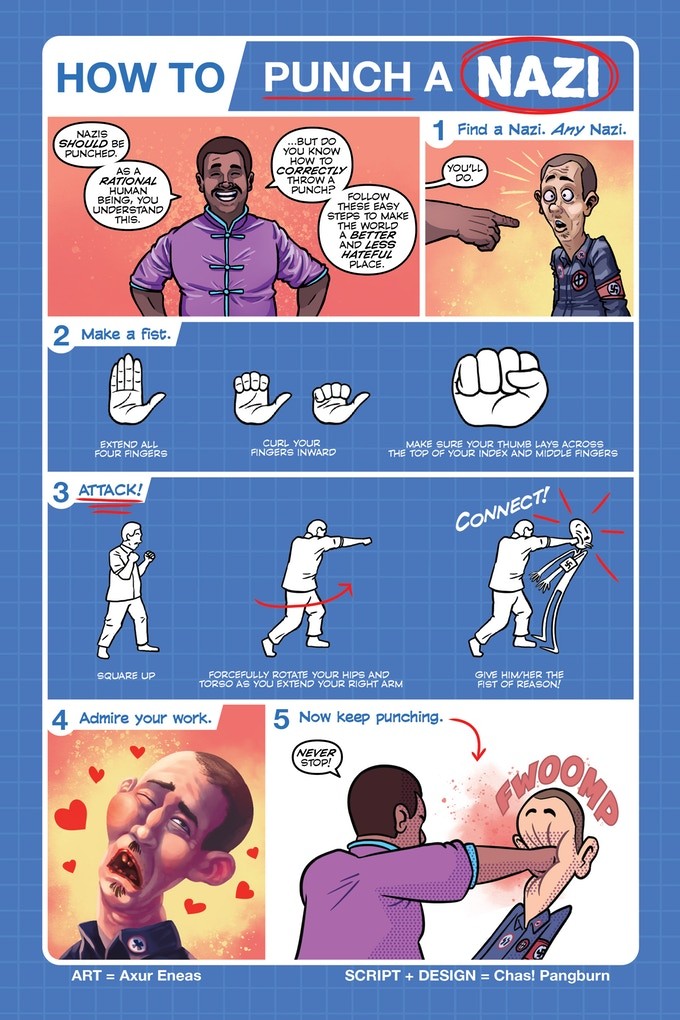 FS: What kind of rewards can contributors of Always Punch Nazis expect?

JH: The Always Punch Nazis Kickstarter took on a life of its own this past week. Pilot Studios simply wanted to get the book in as many hands as we could while raising money for a good cause. We set a low limit to guarantee funding, which worked like a charm. Ultimately, if you wanted to contribute to this campaign, we wanted you to get a book. The reward tiers range from a simple PDF copy of the book to printed copies. I think the best deal is the Ben Ferrari head sketch reward. Cover artist Luis Rivera offered to draw an 11×17 pin-up of your favorite comic book character punching Hitler in his face. Kurt Belcher offered to draw an 8.5×11 pin-up of your favorite character as well. Any time you can get original art, it’s an amazing reward. Getting original art from Luis or Kurt makes it a great deal.

CWC: We also recently added a reward tier for retailers to grab 20 copies of the book as well. We want people to get the book and had always just planned on putting it out any way we could. The response has been insane and not entirely what we expected. We wanted people to see it, order copies, and tell their friends. It’s also allowed us to get people like Hilary Barta involved with an image that will be a great back cover and pin-up and to offer the How to Punch Nazis image as a print for people who donated. More to come, hopefully, and possibly more pinups.

FS: Your original Kickstarter goal was a modest $100 and you’re already at nearly $4,800 with four days to go. Clearly, there’s interest! Do you all have plans for a follow-up, given the reaction to this first successful campaign?

CWC: I mean, Volume 2 is a definite at this point, and APN might be turning into something more as time goes on too. That’s all we can say at this point.

As of press time, the Always Punch Nazis Kickstarter has met its $100 goal 48 times over, but that doesn’t mean that you can’t still help! You have until 5:15 PM on August 23 to contribute!