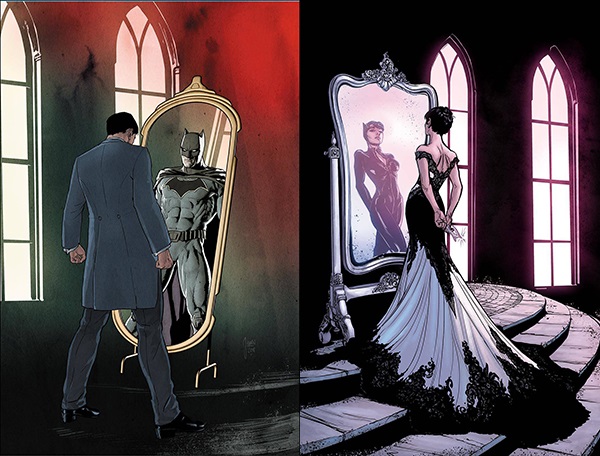 Transformation is one of the through-lines that we’ve seen over and again in Batman’s nearly 80-year history: reinventing oneself to evolve, to grow, to adapt to ever-changing environments and relationships. Since he took the writing reins of Batman, writer Tom King has put Bruce Wayne under the emotional microscope, particularly focusing on his relationship with Selina Kyle—the sometimes heroic, sometimes larcenous Catwoman—and how each character’s personality and wants affect the other. With Bruce and Selina’s recent engagement, King has been examining how a possible marriage between the two would be informed by their pasts and would impact their futures—both in and out of costume. King looks at that concern framed by another wedding ritual—picking out the bride-to-be’s dress—in this week’s Batman #44. 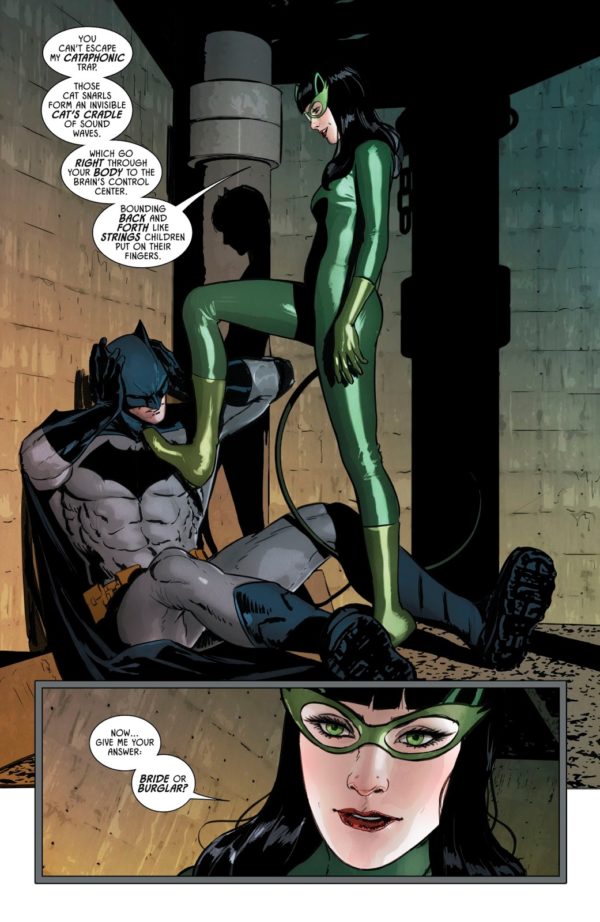 But Selina doesn’t make a trip to a bridal shop in broad daylight, opting to break-in—of course—after hours, having the place to herself and trying on dresses without salespeople milling about. Selina’s slant on this marriage rite of passage is juxtaposed with her interaction with Batman over the years, showing how it has grown and changed to the point where the duo now find themselves. As we watch Selina try dress after dress, find none to her liking, we also look on as the Bat and Cat wear new costumes throughout the course of their relationship. Artist Mikel Janin beautifully renders each costume lovingly—I had completely forgotten about Selina’s green Catwoman outfit and now I’m head-over-heels all over again. Toward the end of the issue, Bruce-as-Batman remarks that the two keep changing—likely referring to their interplay—while Catwoman insists it’s just their costumes, as they’re looking for something that “fits.” (Of course, her reply is a play on words, as their whole history could be seen as a move toward finding a way that their relationship “fits” properly.) 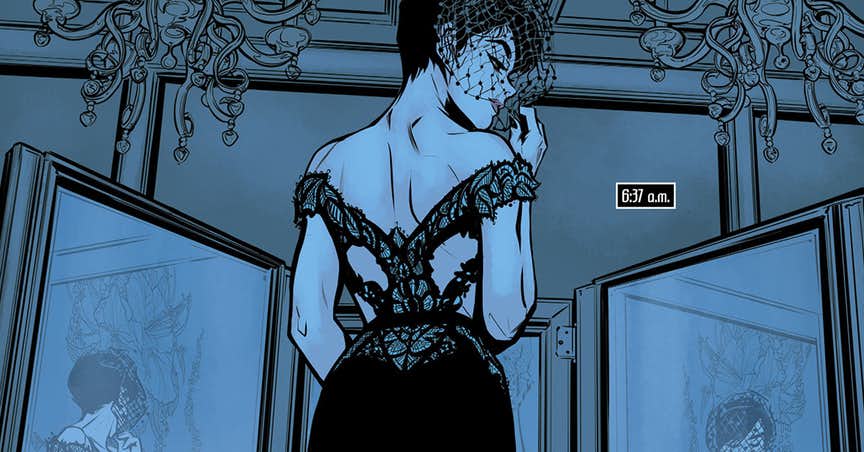 Back at the dress shop, Selina finds a gown that fits her best, the gorgeous design by artist Joelle Jones—who handles the Selina/gown side of the issue—that’s been teased ahead of this tale. The color scheme is an inky black that covers the dress until the latter third or so gives way to white. While the black gives a nod to her history as a costumed vigilante, it’s also an acknowledgment of Selina keeping her own autonomy. She’s a partner to Bruce in costume and their marriage will give way to another type of partnership. Anyone who’s been married or in a long-term relationship knows that there’s a balance that has to be struck between both being a part of a team and being one’s own person. Selina wants to pay homage to both.

The title of the story is “Bride or Burglar,” but, in the end, King seems to say that it’s not an either/or proposition. The smile on her face as she sneaks back into bed with Bruce as she makes it back to Wayne Manor says it all: she’s figured out that it doesn’t have to be a choice.

Batman #44 gives a peek behind the mask (or veil) of who Selina is and her worldview, while at the same time hints at why she and Batman have played their cat-and-bat game over the years.

BATMAN #44 Is All About Catwoman & Choice
Batman #44 gives a peek behind the mask (or veil) of who Selina is and her worldview, while at the same time hints at why she and Batman have played their cat-and-bat game over the years.
10Overall Score
Reader Rating: (3 Votes)
6.6