“Black Cloak Man #1 is a perfect fusion of fantasy and mystery and highlights and honors the best of both.” World-building ain’t an easy thing. Throwing a new reader into a brand-new world with zero context and trying to catch them up in such a way that has a narrative flow that doesn’t feel leaden—well, that’s a feat for any creator, no matter how long they’ve been practicing their craft.

Fortunately for us, the team behind Black Cloak #1, out now from Image Comics, are more than equipped for the challenge. The book is stacked with a who’s-who of comic book industry pros, including writer Kelly Thompson (Captain Marvel, Hawkeye) on her first book for Image, artist Meredith McClaren (teaming up with Thompson once again on this series), and letterer Becca Carey (who is a veritable Swiss Army knife of comics skill). The trio craft a world that has rebuilt a lone city in the ashes of an all-consuming war, a renewal that has brought a peace that may be all surface. As the very first page notes, “Without [a] common enemy] …it’s a fucking mess, and assholes are all too plentiful.” 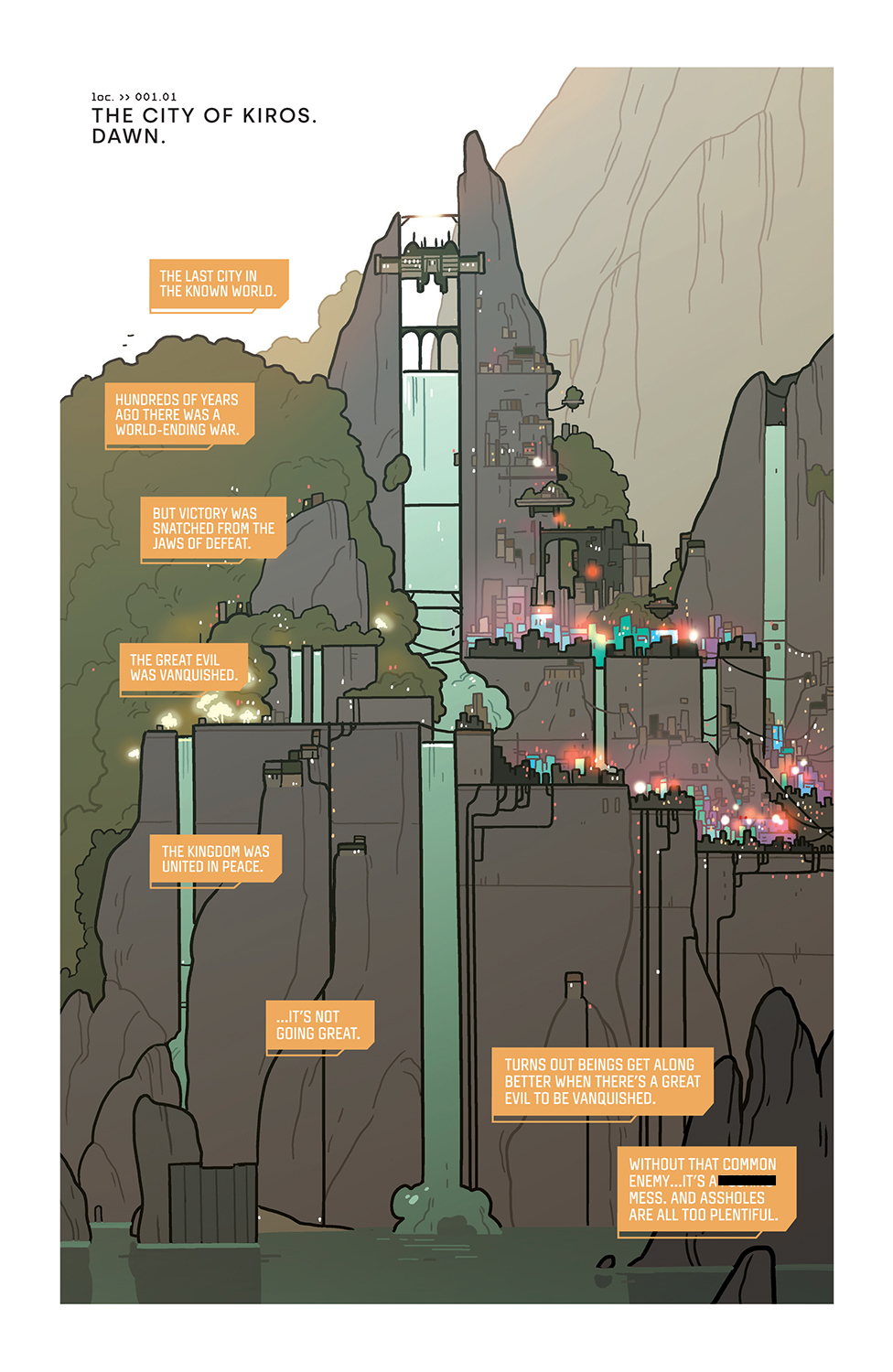 Science fiction has dabbled frequently into the world of hard-boiled detective yarns, but it seems lesson commonplace in the realm of fantasy. Thompson, McClaren, and Carey use that novelty in the first installment of The Black Cloak to create the comic’s city of Kiros and its residents that simultaneously ethereal and gritty, with the fantasy elements brought down from the clouds with the grime of murder of a prince and scandal. Thompson is adept and nimble with her dialogue, as always, with that dialogue helping to move the story in a way that doesn’t feel expository, while using language that feels down-to-earth in a manner that tips readers to the muck we’ll see the cast wade through. Elves and fauns may populate Kiros, but those characters have complicated inner lives behind McClaren’s gorgeous linework.

Along with that character crafting, as I said at the top, there’s a lot of world-building going on in issue #1, from the history of Kiros to the inhabitants to the political and law enforcement apparatuses. Even with the over-sized issue, there’s still a good deal of moving parts always moving. However, that seems by design. The first issue centers on detective work and mystery (which I won’t spoil here) and by throwing the kitchen sink at readers, you’re immersed in the world and don’t get to slow down. It’s incredibly smart on the team’s part and makes the story sit with you for a good long time after you’ve caught your breath. Black Cloak Man #1 is a perfect fusion of fantasy and mystery and highlights and honors the best of both, taking the reader on a trip riding shotgun through fantasy and grime that’ll leave you wanting more.

Black Cloak #1 is on sale now from Image Comics.

SERIES PREMIERE Eisner Award-winning writer KELLY THOMPSON heads to Image for the first time with BLACK CLOAK, an all-new series with artist MEREDITH McCLAREN! Blade Runner style mixes with SAGA-esque drama in a delectable fantasy/sci-fi blend as two Black Cloaks try to solve the murder of a beloved prince in Kiros, the last city in the known world, before his murder tips the city into war. The mystery begins in a spectacular TRIPLE-LENGTH FIRST ISSUE for $4.99!