Writer Brian Wood knows social studies. With his Eagle Award-nominated comic book series Outlanders and even DMZ, set in the near future, Mr. Wood knows how to weave history and social commentary into his work, while making the stories feel pertinent and compelling, a task that’s not always easy to achieve. In the first issue of his new series Rebels with Dark Horse Comics, hitting stands tomorrow, the writer uses fully-realized characters to tell a tale of the early days of the American Revolution. I had the chance to speak with Mr. Wood about his love of history, the research necessary to take on such a story as Rebels, and how he balances storytelling and history in his works.

FreakSugar: I’m a huge history nerd and I felt like the writing and the historical accuracy within the story were spot-on. What was the genesis of this project? Have you always been interested in American history?

Brian Wood: There’s two aspects to this.  The first is that I really enjoy reading historical fiction, and I enjoy writing it.  I did a long running series a few years back called Northlanders about Vikings, and I always knew that I’d do another one, that I’d find some period in history or some event that would inspire me.  That ended up being American colonial times, the Revolutionary War.  I was born and raised in Vermont, and this history is my local history, my childhood history.  So maybe in a way I always had this idea somewhere in the back of my head since I was a kid playing in the woods behind my house, pretending to be soldiers or looking for Indian arrowheads.

FS: What kind of research did you do in preparation for writing Rebels?

BW: Two things:  I read a ton of books, and I spent 18 years growing up in Northern Vermont.  The Vermont thing, which helped way more than the books.

FS: Andrea Mutti’s art seems like a perfect fit for the project. How did you two come together to collaborate? Did you discuss what you wanted the book to look like to match the story? 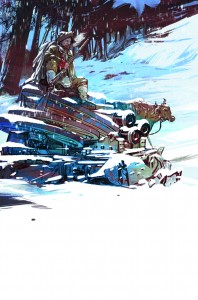 BW: I’ve worked with Andrea before, so we know each other and we know each other’s styles and ways of working, and honestly, given the choice, I will ALWAYS try and work with someone I have history with.  It makes everything so much easier.  So, literally, I just emailed him and asked if he was interested.  He was, which was sort of a surprise.  He’s Italian, he lives in Italy, and I wasn’t sure how much American colonial history would matter to him.

FS: What makes now the right time for Rebels to be told? What makes people continue to take a look back at the American Revolution in fiction?

BW: I think people are always interested in this stuff.  I mean, here we go into another major election cycle and already politicians are taking about the 2nd Amendment, the glory of the Constitution, what the Founding Father’s had in mind for us, and so on.  Since the creation of the Tea Party, it’s reached a fever pitch.  The new releases shelf at the bookstores regularly feature books on the subject, and both AMC and the History Channel have their shows.  But talking specifically about the Green Mountain Boys, when I came across the phrase “America’s first militia” in reference to them, I thought that was just perfect.  What a fantastic opportunity to play on that language and that history, since the meaning and perception of ‘militia’ has changed so much over the last couple hundred years.

That’s the aspect of this that’s most important to me, the fact that this history is being co-opted for political gain in recent times, or its just seen as this glossy, idealized folktale history, Washington crossing the Delaware, and so on.  I wanted to show this history in an honest way, from the POV of normal people, of common people.  We’ve heard Washington and John Adams and Ben Franklin’s story enough times.  What about the redcoat soldier, or the seamstress, or the wives and children, or the African-Americans of the time?

FS: You grew up in Vermont. How did that inform how you approached writing Rebels?

BW: It informed it totally, in every way I can think of.  I lived and breathed the history, it was around me always in the form of street names, plaques, landmarks, and old forts and watch towers.  It also makes all of this personal, and I try and put as much of that as possible into the writing.

FS: How would you describe the character of Seth Abbott?

BW: Seth is part me, in that he’s a kid raised in the woods of Vermont, taught to hunt and hike and do chores by a gruff but ultimately understanding father.  He’s also something of an everyman, standing in for the average citizen who suffered under British rule.  At the start of the story, his suffering is local – the Loyalists are making moves to reclaim their land, and by the end he’s joined the Continental Army fighting in the war, proper.  We follow him from his first brush with revolution all the way to the end.

And via his young wife Mercy, we get an idea of home life at the time as well.  Which is all very gendered setup, I realize, but it was obviously typical of the times.

FS: The first issue was very much told from Seth’s point of view. Will we get to see the war from the stance of other revolutionaries?

BW: Absolutely.  There’s a lot of diversity in this series, both in terms of character and in points of view.

FS: Speaking of balance, how do you approach showing historical accuracy of the time while also highlighting the stories of the people who are in the thick of the Revolution?

BW: I have a semi-official rule when it comes to historical fiction:  cool always trumps history.  If it comes down to making something cool or having it be 100% accurate, cool wins.  It has to.  This is fiction; it has to be a fun and gripping story before anything else.  But I approach the material always with respect and sincerity and honesty, and I always strive to line up with history as much as possible.

FS: Okay, I have to ask: I know you have to have some historical artifacts and paraphernalia in your collection. Which one is your crown jewel?

BW: I honestly only have one, which is a full size, hand made replica Green Mountain Boys militia flag.  It’s hanging in my office.  Aside from that, I have a collection of tactical patches, but those are nothing, just recreations of old colonial flags.

FSL My buddy teaches history, and I’m looking to get back into the classroom. Not really a question, but I can see Rebels being excellent material to make U.S. history come alive for students who might be on the fence about their interest in it.

BW: It’s part of the point for me as well.  Just like I grew to love this stuff as a kid at the school library, I wanted to write this in a way that would work in a classroom context and appeal to a younger age group as well as an older one.

FS: Looking ahead into the future, are there any other historical periods you’d like to tackle in comics form?

BW: A rather non-conventional battle scene on the waters of Lake Champlain, for one thing.  Beyond that, no spoilers.