Dreaming Eagles #1 is off to a rough start. Ennis, Coleby, and Kalisz too often seem to be working against each other, and that’s a shame, because the story of the Tuskegee Airmen is one that deserves to be told, and told well. Here’s hoping they bring their A – game for issue #2.

With Garth Ennis and Simon Coleby’s Dreaming Eagles, new publisher Aftershock Comics tries to enter the war comics genre in a big way. The six-issue limited series will focus on the famed Tuskegee Airmen of World War II, the 332nd Fighter Group of the US Army Air Corps. The 332nd was an all-African-American unit comprised of the 99th, 100th, 301st, and 302nd Fighter Squadrons that saw service in the European Theater of Operations from April 1943 until the end of the war in May 1945. The Tuskegee Airmen are credited with flying 1578 combat missions, destroying a total of 262 enemy aircraft, 950 rail cars and other ground vehicles, 40 boats and barges, and one destroyer. The 99th Fighter Squadron received three Distinguished Unit Citations, and the 332nd Fighter Group as a whole received a third. Individually, the Tuskegee Airmen won 96 Distinguished Flying Crosses, one Silver Star, 14 Bronze Stars, 744 Air Medals, and eight Purple Hearts. Today, the pilots of the 332nd are recognized as some of the absolute best of their time, and the pilots, ground crew, and flight surgeons (the first black aviation medical examiners in US history) gave the lie to the idea that African-Americans were incapable of performing at the highest levels in a service arm that was both dangerous and highly technical. In the face of continuous racism and discrimination both during and after the war, the men of the 332nd left a legacy of tremendous courage and skill that continues to inspire.

Unfortunately, Dreaming Eagles #1 doesn’t live up to its subject matter. The issue is primarily prologue, and is set for the most part in a northern city (Chicago?) in 1966, where 332nd veteran Reggie Atkinson and his son are butting heads about the latter’s involvement in the Civil Rights movement, particularly Lee’s attendance of a march lead by Dr. Martin Luther King, Jr. that turned violent. Lee is angry, and takes pride in his bruises, and delights in having beaten a white antagonist during the march. His father is much more cautious, and very wary of Dr. King and the way he “stirs things up.” This is a nice encapsulation of the generational divide within the Civil Rights Movement of the late 1950s and 1960s, as well as a more traditional father-son tension. Lee thinks his father should understand his desire to strike out, and to demand change, but Reggie apparently is unconvinced that change is all it’s cracked up to be, and all too aware that fighting isn’t.The issue ends with Reggie finally sitting down with Lee to tell him the story of his war days, providing fully five pages of exposition detailing the racial attitudes of both Nazi Germany and America, and the driving need felt by Reggie and his fellows to challenge those attitudes, and prove them wrong. Ennis gets the voices of his characters right, but his trademark humor is almost entirely absent in this issue, making it read as a kind of heavy-handed introduction to A VERY IMPORTANT STORY. Moreover, the framing feels a bit forced and predictable. Robert Kanigher, Adrian Gonzalez, and Tatjana Wood used the same basic device for “Angels with Black Wings” in Sgt. Rock #405 – 406 (1985), the first, very clunky attempt to tell the tale of the Tuskegee Airmen in comics. While Ennis and Coleby’s view of the mid-1960s Movement is more accurate and nuanced, it still feels awkwardly tacked on in this issue. 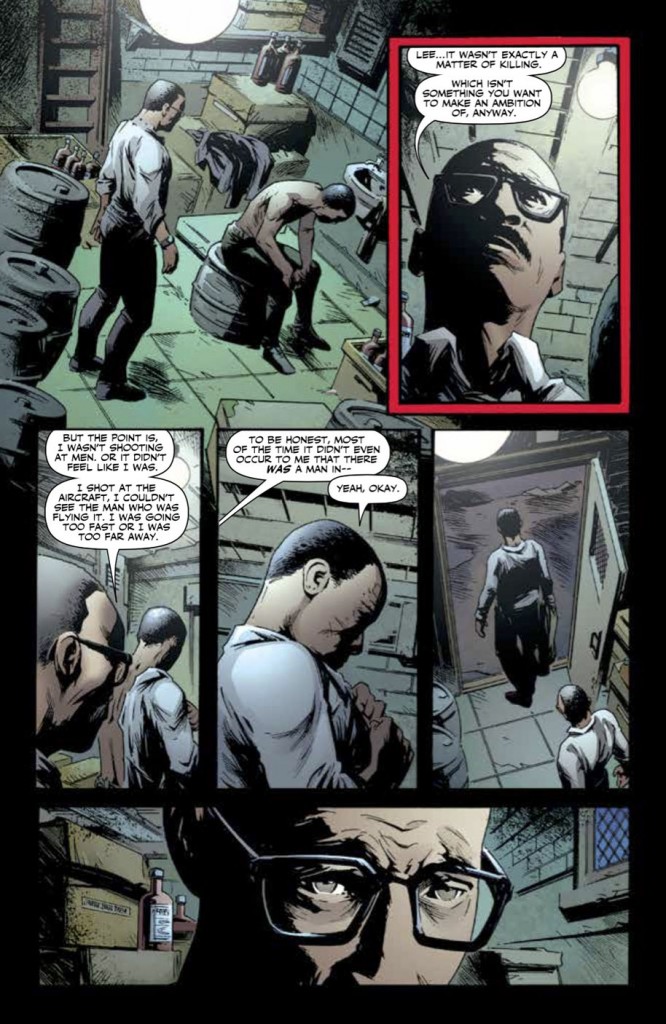 Coleby’s artwork doesn’t help, either. His panels read like carefully composed stills, with little or no sense of motion. More symbolic set pieces than anything else, the art only adds to the air of the book being fraught with meaning. Even in the few air-combat sequences, Coleby’s planes hang – albeit prettily – rather than zip across the page, including one three-quarter splash that is largely an homage to Russ Heath’s Korean War dogfights, but utterly lacks Heath’s tension, and thus devolves into a cold, Lichtenstein-ish still life with Foke-Wulf. Coleby’s stiff composition robs his excellent, realistic line work and wonderful use of blacks and shadow of any real power. Unfortunately, Dreaming Eagles is appearing at the same time as Ennis, Burns, and Wordie’s excellent Johnny Red (Titan Comics) is setting the bar for air-war comics, and suffers badly in comparison. Where Ennis is heavy handed and all too serious in Eagles, his scripting in Johnny Red is deft, wry, and natural. Burn’s art sweeps, moves, and his planes fly. As for coloring, Dreaming Eagles’ John Kalisz shows a real talent for the feel of light at different times and in different places, but his pallet is too reliant on flats, giving the book a sepia-tone feel that is occasionally jarringly interrupted bythe sudden appearance of technicolor primaries. To be fair this technique is right on the edge of working, and working really well, but it’s just not quite there yet — a vibe that pervades the entire book. 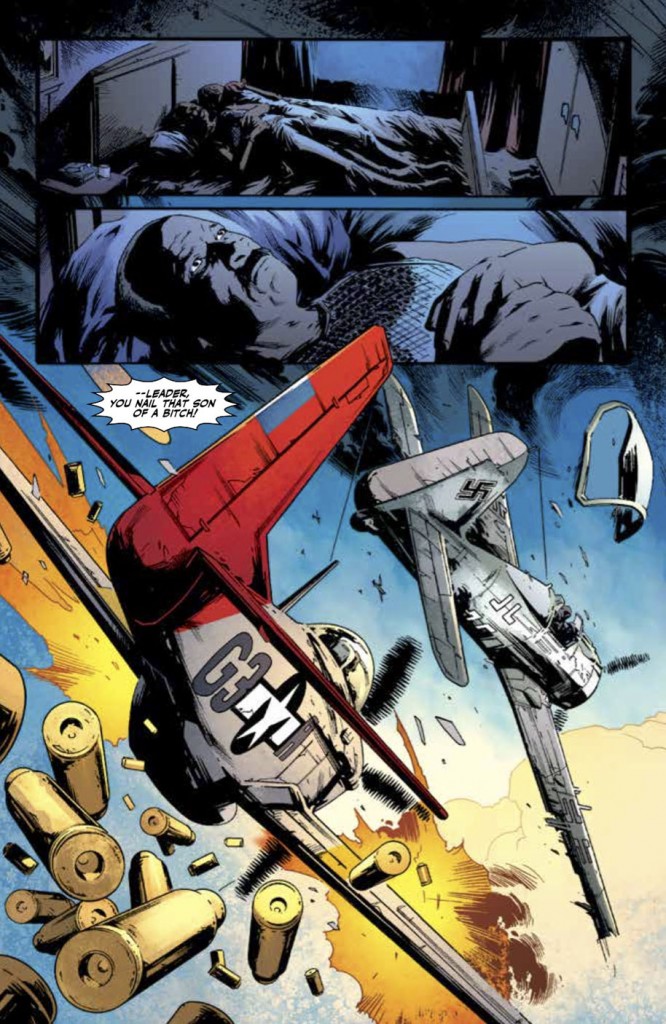 Still, this is the age of the trade collection, and it may well be that the floppy format doesn’t do justice to what will be the completed work. For this correspondent’s money, however, Dreaming Eagles is off to a rough start. Ennis, Coleby, and Kalisz too often seem to be working against each other, and that’s a shame, because the story of the Tuskegee Airmen is one that deserves to be told, and told well. Here’s hoping they bring their A-game for issue #2.

C'est la Guerre: Review - Dreaming Eagles #1
For this correspondent’s money, Dreaming Eagles is off to a rough start. Ennis, Coleby, and Kalisz too often seem to be working against each other, and that’s a shame, because the story of the Tuskegee Airmen is one that deserves to be told, and told well. Here’s hoping they bring their A – game for issue #2.
6Overall Score
Reader Rating: (0 Votes)
0.0