For the past three years, writer Cullen Bunn and artist Tyler Crook have spun a southern gothic tale of remorse and revenge, power and phantasms, cruelty and kindness in their engaging Dark Horse Comics series Harrow County. This March, Bunn and Crook will guide the series’ protagonist Emmy to her reckoning with burned witch Hester Beck, which will decide the fate of Harrow County itself. While Harrow County sometimes has the hallmarks of a fairy tale, no one involved is guaranteed a happy ending. Misters Bunn and Crook spoke with me recently about the upcoming arc, their reflections on the series as a whole, and the lessons Emmy has learned along the way. 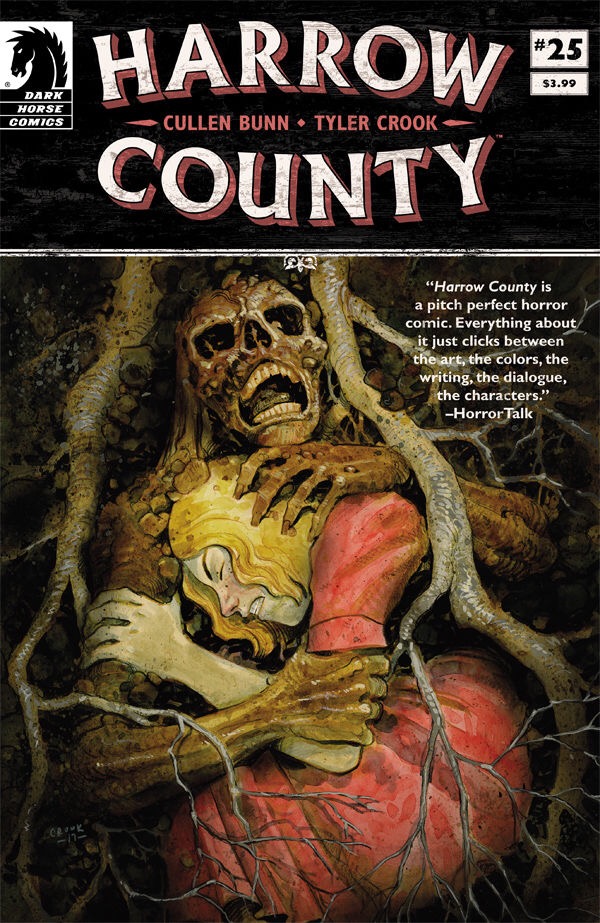 FreakSugar: For folks joining in, where do we find all of the players at the end of the last arc and the beginning of final arc?

Cullen Bunn: At the end of the last arc, Emmy has seen some major upsets in her life. Her father is dead—killed by her evil sister, Kammi—and she has lost her familiars, The Tattered Skin and the Skinless Boy. She has also damaged her relationship with Bernice. Sensing that the witch Hester Beck was returning to Harrow, Emmy did the unthinkable. After she killed Kammi, she ate her flesh. This is one of the ways in which beings like Emmy can absorb the powers of others. This is what Hester did all those years ago with her sister Amaryllis. This act will be haunting Emmy as she faces her greatest challenge—because Hester IS coming back, and she wants to claim Harrow County as her own.

Tyler Crook: Basically, everything is broke and getting broker. 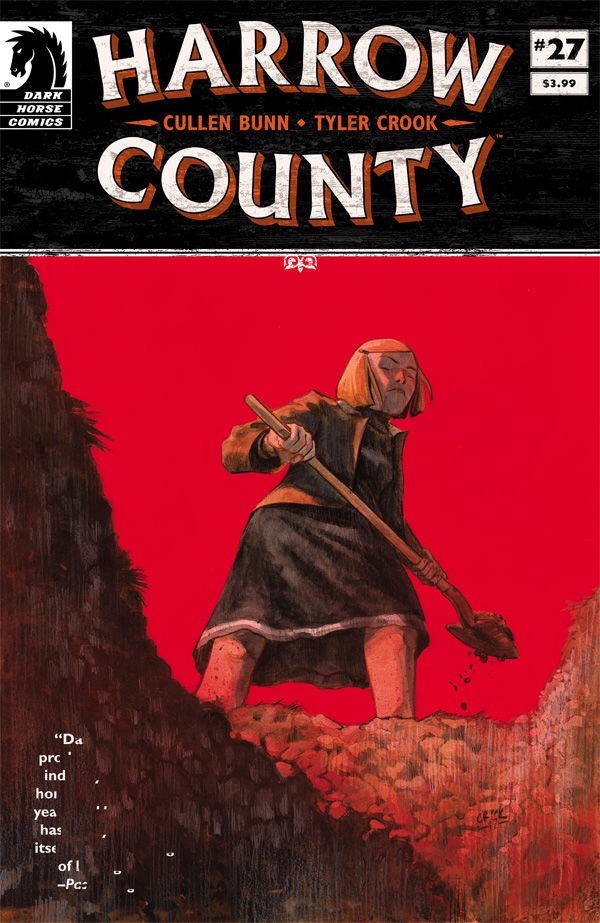 FS: Harrow County, while often called a horror comic, blends so many genres and thematic elements, from cautionary tale to fairy tale to southern gothic. How would you describe Harrow County?

CB: From the beginning, I’ve called Harrow County a southern gothic fairy tale. There are certainly elements of horror in this story. But there are also elements of hope and beauty and wonder.

TC: I feel like it’s more of a fairy tale than anything else. Mostly just because think fairy tales are usually actually horror stories. And the central character, Emmy, feels a lot like a fairy tale character but hopefully with our own kind of twist. 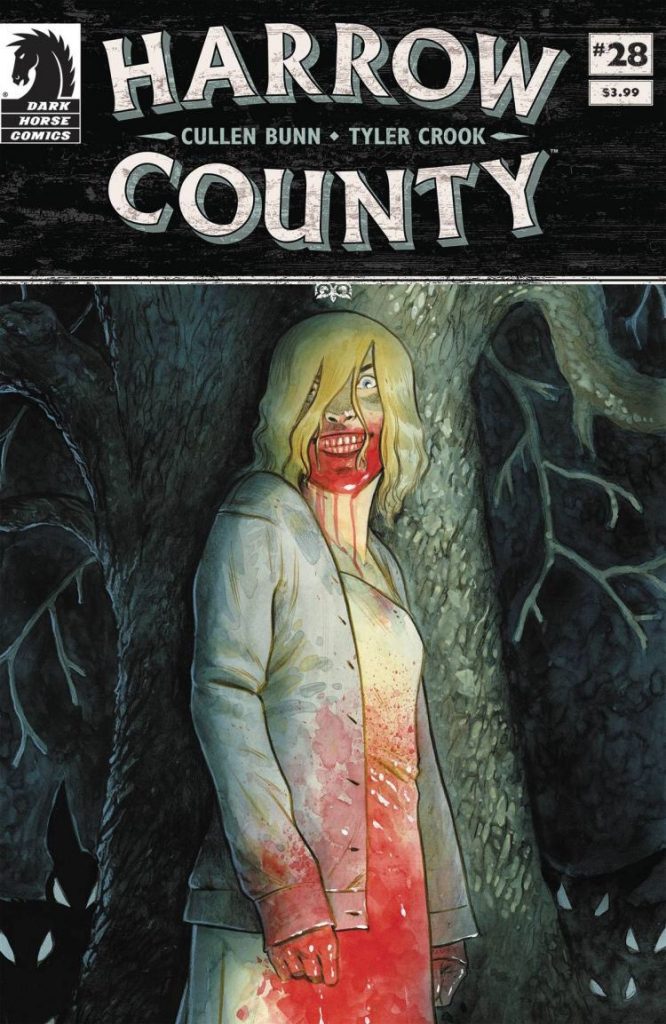 FS: Looking back at your time with Harrow County, how has the series evolved from when you started to where we find ourselves near the end? Has your vision for the conclusion changed at all from those initial issues?

CB: The series changed in little ways over the last few years. Characters—like Bernice—surfaced as favorites and got more focus than originally intended. Certain events—like the arrival of Emmy’s “Family”—brought new elements to the story. Keep in mind, when you work on a series like this, you can’t be sure if you’ll get a long run or just a few issues. But, even when writing the first few issues, I had an idea of where the story would end up, and we’ve been working towards that all along. There are little changes and enhancements along the way, but the destination is close to what was intended.

TC: With lots of projects, you start off with the best of intentions and plans but it still takes a while to truly find the story. Harrow County is one of those rare projects where I feel like we “found” the story with the first page. I think we could see the end the whole time but as we get closer it has come into focus for us.

FS: Following up on that, the pages drip with atmosphere with each and every page. Has how you’ve chosen to create that atmosphere changed from the beginning of the series?

CB: I can’t speak for Tyler, but I feel as though the mood and atmosphere—the personality of the book—has been pretty consistent all along. Some stories really on more shocking or horrific imagery. Some are more somber and subtle. But once Tyler started drawing the first images of Harrow, the tone of the book cemented in my head.

TC: I’ve had two guiding principles: 1) when in doubt try to make it beautiful and 2) if there’s blood, there’s a LOT OF BLOOD. My process has changed a lot over the course of the last 3 years but I’m constantly referring back to the first few issues to hold onto that same mood that we started with. 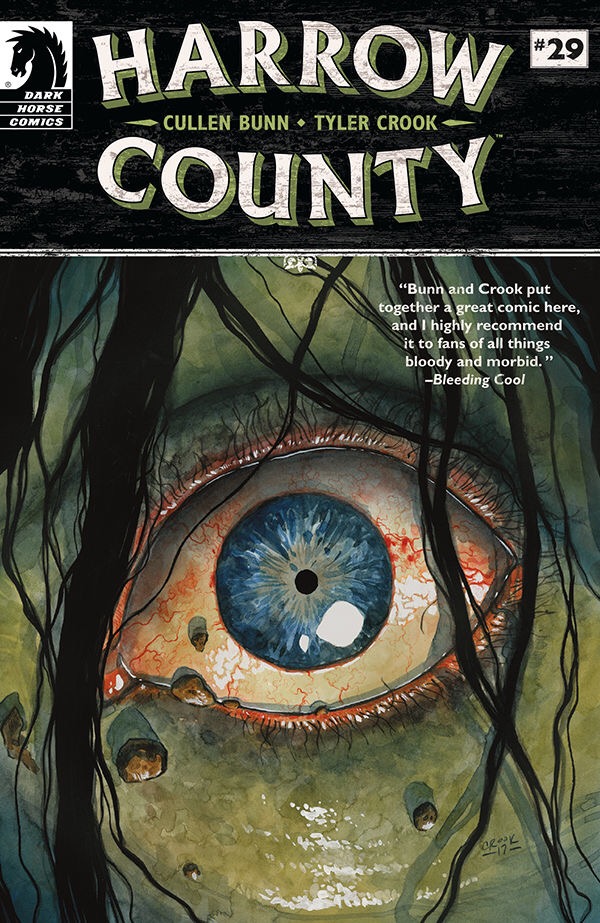 FS: The last arc ended in carnage and chaos. It was also about how the scars of violence never really disappear, how the past will never stay buried (literally and figuratively), and facing hard truths. Is that a fair assessment? Are there any lessons or takeaways you wanted to impart from the beginning of Harrow County?

CB Yes, that’s fair. Overall, Harrow County has always been about the past, fate, and destiny. Destiny—and how we either embrace it or struggle against it. Emmy faces a destiny that, at first, she feels she has no control over. Bernice faces a new duty and fate when she learns from a witch who has haunted Harrow for decades. Pa is encumbered by the choices he made 18 years ago and the choices he is supposed to make now. Even the Skinless Boy has memories of a life that he longs for, but he has to choose between it and Emmy.

TC: I hope we’ve done a good job of making the whole situation really messy and confusing for our characters. It’s not always clear if we are doing the right thing especially when the stakes are so high and events rolling along so fast. I think that’s true for just about every character in the book.

FS: Following up on that, what have the characters learned—either about the world around them or themselves—that will motivate their actions in the concluding arc?

CB: Focusing on Emmy, she’s learned that she must be her own person. Throughout the series, she is told repeatedly, “You’re Hester” or “You’re Amaryllis” and she sort of suffocated under those assumptions. Now, though, she’s starting to embrace the idea that she is her own person and she must carve out her own path in this life.

TC: To add to that, Emmy also has to learn to take responsibility for her own actions. Particularly in the last few issues, we start to see her make choices that have profound effects on her and the people around her.

FS: What you tease about what we can expect in this concluding arc? Where does Emmy go from here?

CB: I don’t want to give too much away, but when the story is over, Emmy will not be the same. Now, that might mean she’s dead. Emmy may not make it out of this arc. All of Harrow County might end up destroyed before the story is over.

TC: It’s hard to say at this point if the story will end with “They lived happily ever after” or simply “the end.”

An old enemy is back with a vengeance and is dead-set on reclaiming her power over Harrow County. And Emmy is the one person who can stop her . . . So, guess who’s the first target?