Alien, the science fiction/horror film focusing on a Xenomorph extraterrestrial killing its way through the crew of a commercial space ship, is filled with all manner of frights and terror to keep viewers biting their nails and rocking in their seats. In fact, there are so many scares and slaughter that only two survivors make it out alive by the end of the tale: Ellen Ripley (played by Sigourney Weaver) and her cat Jonesy.

Although Jonesy was not front-and-center in that 1979 movie, writer and illustrator Rory Lucey was intrigued as to what the cat’s point of view would be in the ensuing mayhem on the his and Ripley’s ship, so much so that he conceived Jonesy: Nine Lives on the Nostromo, on sale from Titan Books. Told from Jonesy’s perspective, we are given a lens into what the feline saw as the Xenomorph attempted to eliminate the ship’s crew, including his human companion. The illustrated book balances the sweet and scary beautifully and, if you weren’t concerned with Jonesy in the original Alien film, you will be all-in on his journey by the end of this yarn.

We spoke with Mr. Lucey recently about the genesis behind Jonesy, how being a cat dad himself aided the storytelling process, how he worked to get the tones of the story just right, and Jonesy’s curiosity about the rest of the crew and the Xenomorph itself. 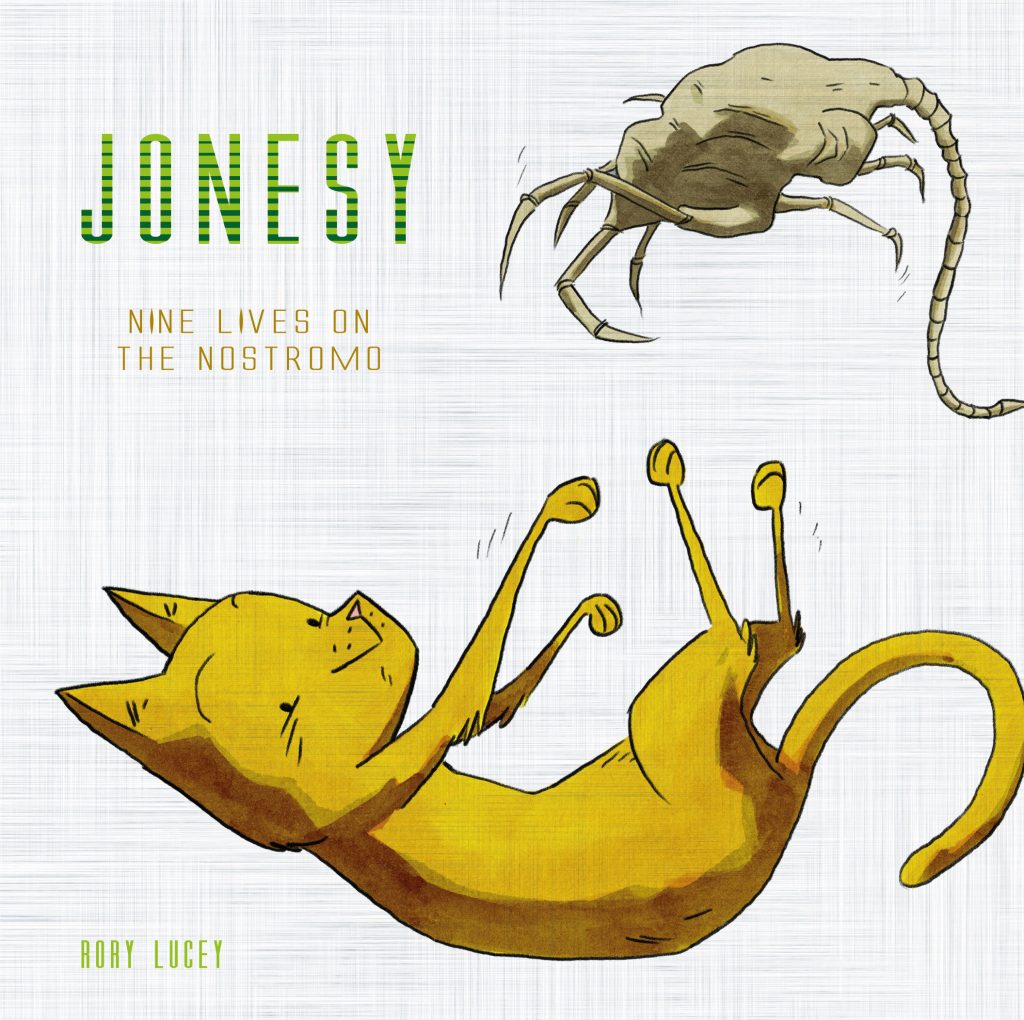 FreakSugar: For folks who are considering picking up the book, what is the idea behind Jonesy: Nine Lives on the Nostromo?

Rory Lucey: Originally, the pitch was a kid’s book featuring Jonesy. But it definitely evolved as a project to something that appeals to kids and adult fans of Alien alike.

FS: I love the concept of the book, but how did you land on focusing on Jonesy and this story?

RL: I was brainstorming pop culture stories that I could tell and my wife suggested I do something about Jonesy. Jonesy has always stood out in Alien not just because it’s surprising to see a cat on a spaceship, but because in the end Ripley puts herself in greater danger to make sure he’s safe. And as I thought more about it, it only made sense that Jonesy would have his own parallel story that we wouldn’t be clued in to. 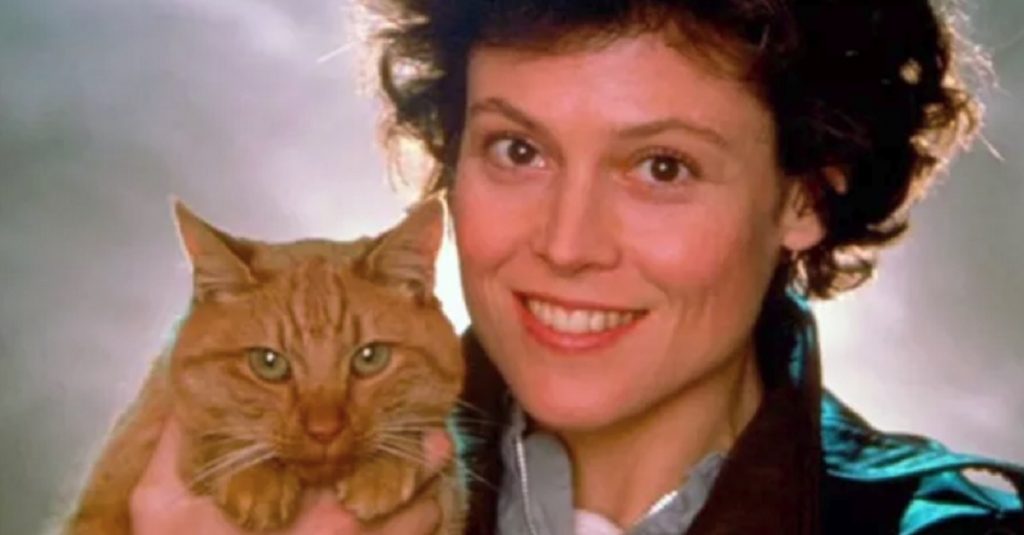 Jonesy and Ripley in ALIEN

FS: You own a cat yourself. How did being a pet dad impact how you approached writing and drawing the book?

RL: There wouldn’t be a book were it not for my cat Caesar. I wrote down all of his habits (yelling to be fed, kneading blankets, hopping on my shoulders to cuddle, getting stuck in boxes) and I moved them from my house to the Nostromo. I read the book with my three-year-old nephew and he was quick to point out, “That’s not Jonesy, that’s Caesar.” He wasn’t wrong.

FS: Following up on that, did your background as an art teacher come into play as you developed Jonesy?

RL: It did – teaching art helps me be a better artist and vice versa. I try to help students to take chances, experiment with their work, but also to be mindful of elements and principles of art and design to make their work visually engaging, so I need to be mindful of those ideas when I‘m doing my own work! 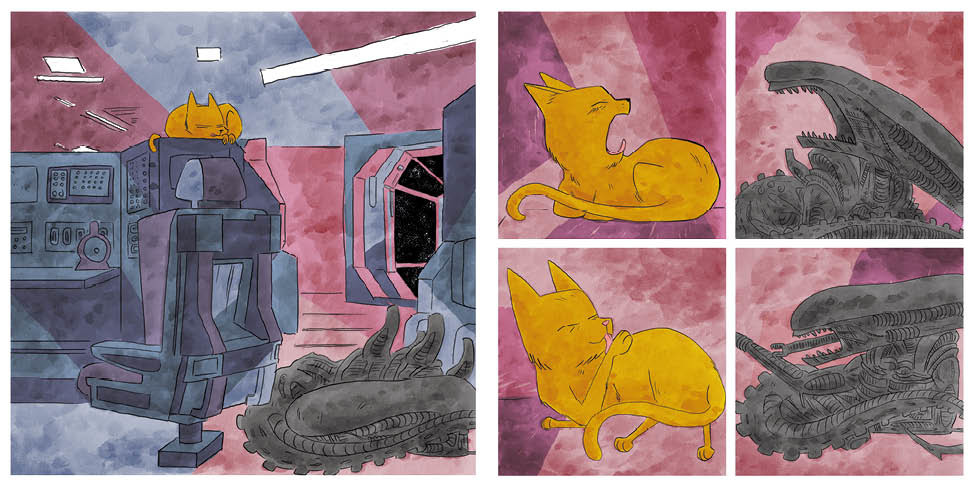 From JONESY: NINE LIVES ON THE NOSTROMO

FS: Sci-fi and monster movie fans know the plot of the first Alien film by heart. Looking at the story from Jonesy’s point of view, how does it affect the tone, atmosphere, and overall tale?

RL: I wanted the context for Jonesy’s story to still recognizably be within the film. So in moments like Brett’s death or Ripley’s terror as she’s trying to escape the ship–where Jonesy is connected directly to the nightmarishness of the story–I still wanted to communicate that tension and those feelings. But the beauty of cats is that they could care less about human concerns, so most of the humor comes from those moments where cat hijinks are at odds with what the Nostromo crew is up to.

FS: Alien is a fairly tense movie. How did you balance the sweetness of Jonesy with the dark tone of the original story?

RL: Jonesy, as I drew him, is a really innocent character. His relationship to the ship and the crew and even the Xenomorph is founded in curiosity, so while the background of a lot of scenes is terrifying, Jonesy is not fully getting what’s really going on around him and still pokes his nose around places he has no business being–like any typical cat! One moment that comes to mind that I don’t want to spoil is when he comes across Ash later in the book… 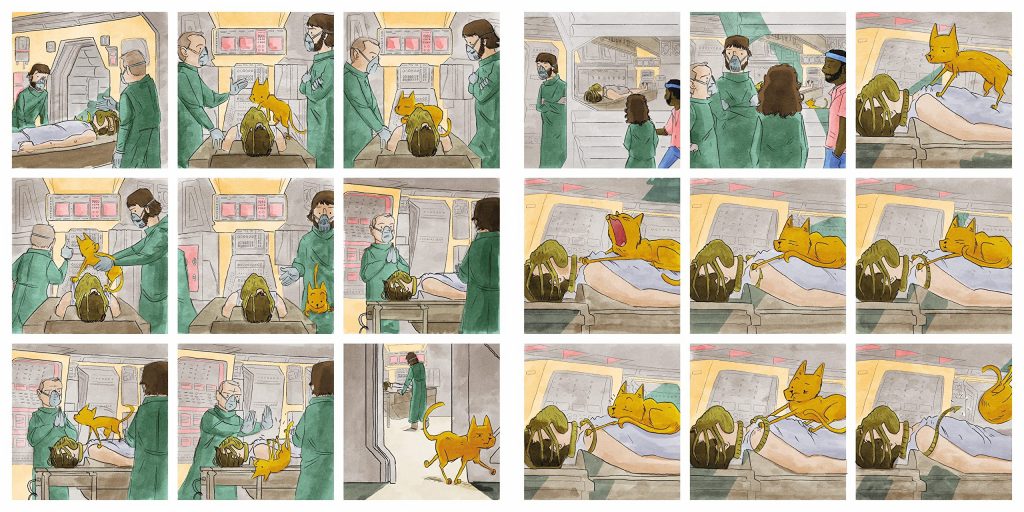 From JONESY: NINE LIVES ON THE NOSTROMO

FS: Was there anything in the creative process that surprised you as your story unfolded?

RL: I experimented a lot in color and texture of the backgrounds as I was making it. So when I have Jonesy in the vents with Dallas, I wanted it to look starkly different from the ship while still very much being the Nostromo and that turned out so much better than I initially imagined. I wanted to leave room in the process to experiment so it stays interesting throughout. There’s so much out there about the set design of the film, so it was great to just dig into that through the process of illustrating the book.

Jonesy: Nine Lives on the Nostromo is on sale now from Titan Books.

Aboard the USCSS Nostromo, Jonesy leads a simple life enjoying The Company cat food and chasing space rodents. Until one day, his cryostasis catnap is rudely interrupted. The humans have a new pet and it’s definitely not house-trained.