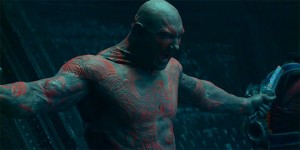 Earlier this week in Know Your Guardians of the Galaxy, I looked at the Totally-Not-She-Hulk-With-Knives badass, Gamora. Today, I will turn the spotlight to the Totally-Not-The-Hulk-With-Knives, Drax the Destroyer, played by WWE porfessional wrestler Dave Bautista in the Guardians film, premiering this Friday. Like Gamora and Thanos, Drax was also created by Jim Starlin (along with writer Mike Friedrich). It took a series of painful revisions and a period of Drax doing his best Hulk cosplay before we got to the version of Drax we currently see in the film and the Marvel Comics. But we’ll get to that.

Drax the Destroyer first appeared in an issue of Iron Man of all place, because Iron Man attracts more green folk than Captain Kirk. Drax started life as the human Arthur Douglas (which, judging by the name, strikes me as a guy who owns a lot of khaki-colored shirts). Arthur and his family were driving along, minding their ps and qs, when Thanos, the Mad Titan, flew by and blasted their hides, execution style. (Thanos thought the Douglas family saw him in his spaceship. Thanos don’t play.) Heather, Arthur’s daughter, survived and was taken to be raised by Thanos’ father, Mentor. Kronos, Thanos’ grandfather, wants to take out the threat of Thanos PDQ. So, for some inexplicable reason, Kronos uses Arthur’s soul to create Drax the Destroyer. Dude is green, simple, muscular, and wears purple. Sound like another character of yours, Marvel?

(I suppose Kronos thought that Arthur would be motivated by his hatred of Thanos in order to take the Mad Titan out. Can’t imagine what could go wrong with that airtight plan.) 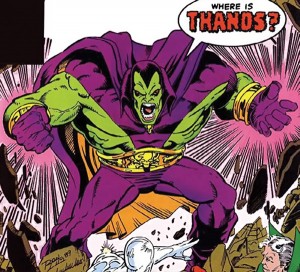 Drax and Iron Man manage not to take out Thanos, probably because he was aided by the Blood Brothers, which, if that’s not the name of a pro-wrestling duo, it should be. Drax has his memories of being human restored to him during a conflict with Thanos. He would now be able to get his chance to take out the Mad Titan, except not really. Captain Marvel robs Drax of his revenge not once, but twice. Captain Marvel was a fame whore, anyway. Had a big star on his costume and everything.

Drax later has a reunion with his daughter Heather, who now calls herself Moondragon, with a flowy cape to match her somewhat pretentious name. In the category “Best Professor Xavier Homage,” she’s bald and has telepathic powers. The duo travel the stars for a while, until Moondragon decides, “Wouldn’t it be nice if I were a goddess?” and mentally enslaves a planet’s residents into tranquility. During an effort to stop Moondragon, the bald beauty forces Drax’s soul from his body. Family reunion ruined. *sad trombone*

Oh, hey, Thanos isn’t dead. Again. Mistress Death, with whom Thanos has unhealthy obsession, resurrects Thanos to wipe out half the universe’s population. (Thanos might be the first emo supervillain.) To this end, Thanos forms the Infinity Gauntlet, comprised of six gems that give him the power of a god. Because he likes to play games with Drax’s heart, I guess, Kronos resurrects the Destroyer in an effort to stop Thanos. Drax helps many of Earth’s heroes, including Gamora, to defeat Thanos. The campaign’s leader, Adam Warlock, gains the Infinity Gauntlet in the end, but is forced to relinquish the gems. He entrusts the Power Gem to Drax, because giving a simpleton ultimate power always seems like a good idea.

After Drax loses the gem, Moondragon asks Kronos to restore Drax’s mind to Arthur Douglas-mental nimbleness. Ah, that’s kind of sweet, seeing as she was the one who expelled her father’s soul from his body. Best Father’s Day gift ever! After a series of wacky adventures (presumably), Drax finds peace after being transported to the Microverse. 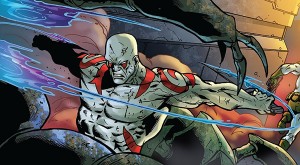 Just as the Annihilation Wave, led by the insectoid Annihilus, threatens the universe, Drax makes a reappearance on a prison transport ship, looking all svelte and Billy Badass, rocking the body of an MMA fighter and wielding knives. No longer a faux-Hulk, during the Wave, Drax manages to aid the United Front, including Star-Lord and Gamora, in staving off the Wave. During the war, Drax makes his way to Thanos, who is on the Wave’s mother ship and has Moondragon hostage. During a skirmish, Drax, finally, fulfills his mission and kills the Mad Titan. After the universe experiences a short-lived peace, Drax gives his aid to Star-Lord and his friends to stop the Phalanx’s assault on the galaxy. During yet another battle against Thanos (he got better), the Guardians of the Galaxy—Star-Lord, Gamora, Groot, Rocket, and Drax—try to stop the Mad Titan. (I suppose fewer and fewer heroes at this point wanted to fool with Thanos’ “I want to kill everything and make it with Mistress Death” bullshit.) Drax dies in combat trying to stop Thanos again. However, Drax later appears with the Guardians and is once again part of the team. (Drax also got better, apparently.)

Also, again, knives. For some reason.

Join us Friday for our last bios of the members of the Guardians of the Galaxy: the highly marketable, almost-made-for-plush-toys Groot and Rocket!