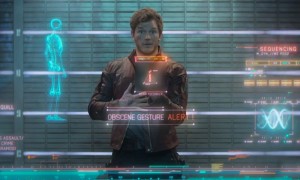 I don’t think it’s much of a stretch to say that, aside from the most diehard of comic book fans, folks had no idea who the Guardians of the Galaxy were before the release of the first trailer to the upcoming movie of the same name. Many of you still may only know that they’re just a bunch of space-based heroes that feature the dude from Parks and Recreation and a talking raccoon. Fair enough. The Guardians of the Galaxy, by my own admission, are fabulous and balls-to-the-wall insane, but also kinda weird. (No weirder than, say, a blue-fur covered mutant or a Norse Thunder God, but they have better PR.) But even if not all of us know who the Guardians are, most of the non-comic aficionados I’ve spoken to seem really jazzed for the premiere of Marvel‘s Guardians of the Galaxy on August 1st. With that in mind, over the next couple of weeks, I’m going to give you background information of the Guardians who will appear in the film: the basics you need to know and a smattering of trivia to wow your friends and annoy the Hell out of them during the movie. So strap in. First on our docket: Star-Lord.

(Also: You guys are getting off light. I first encountered Star-Lord in a comic book set in an alternate reality future in which Captain America had turned into an angel wielding a sword and sought out Star-Lord, who was living in his own personal Heaven, to solicit advice. Mu’fuckin’ comics, folks.)

Star-Lord. You read that correctly. If you want an idea of how big a deal it is that the character Star-Lord is appearing in a big Marvel film, his character isn’t even listed in the 2009 revised edition of The Marvel Comics Encyclopedia. That’s just five years ago that he wasn’t deemed important enough to include as a Marvel character readers should know about. Hell, the encyclopedia included a guy named Glob. Damn, folks. Glob. Bet you’ll never see him in a major motion picture.

(Note: I found Star-Lord’s name on one page in reference to another entry. Who in the Hell did Star-Lord piss off at Marvel? I imagine the conversation going like this: “’Star-Lord”? More like ‘Douche-Lord’? Fuck that guy. Keep his goofy ass out of that encyclopedia. So help me God, I don’t want his name listed among the likes of our more respectable characters. Slapstick and Glorian deserve better.”)

As Marvel Comics is going revisionist-crazy with Star-Lord lately, I’ll give you the basics that are considered to be canon for his origins today. 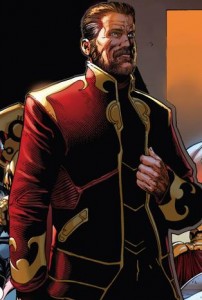 Years ago, J’son of Spartax crash-landed on Earth, where he met Meredith Quill. Luckily, in true Star Trek fashion, J’son was humanoid, so the two dated and mated. You know, that old chestnut. When it was time for J’son to leave, he left Meredith pregnant with Peter, the boy who would be our future hero. He also left Meredith with a space gun, which I can only assume is some sort of consolation prize or alimony for abandoning his pregnant lady.

Years later, when Peter was ten, still unaware he was a human/alien hybrid, the Badoon, a reptilian race of alien assholes, land on Earth and cap Peter’s mom, Mafia style. Peter dispenses with the Badoon, who died from a case of shotgun blast. Peter then finds his dad’s space gun and hightails it out of the house, just in time to escape before the Badoon destroys the Quill homestead and leaves, thinking their target, Peter, is dead. 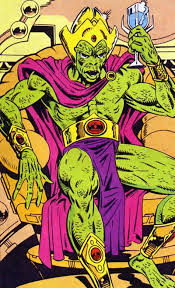 (Trivia: The Badoon were the main adversaries of the first incarnation of the Guardians of the Galaxy, who were superheroes who fought the Badoon’s tyranny in the 30th century. Also: Skrulls, Badoon—anyone else think that Marvel has a things against reptilian-looking folks? Stop being bigots, Marvel.)

This left Peter alone in the world, and he was placed in an orphanage, his only belonging what authorities dismissed as his “space toy”. He later becomes a trainee for NASA (FORESHADOWING!), where he encounters the Master of the Sun on a space station. The Master offers Peter and the other astronauts the mantle of Star-Lord to a worthy candidate. The Star-Lord is an intergalactic policeman of sorts, and Peter wants the job. However, since Peter was a bit of an asshat to one of his colleagues, he’s found unworthy. The object of Peter’s scorn is offered the mantle. In what would be Dick Move #2 to the same colleague, Peter jumps in and takes the mantle of Star-Lord instead. 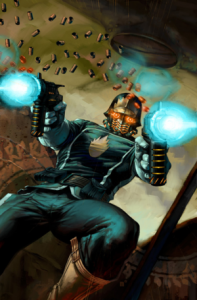 During his time as Star-Lord, Peter discovers that the alien J’son is his dad, which is probably better than being on Maury Povich for one of those paternity test episodes. Later, he encountered a former herald of the world-devourer Galactus known as the Fallen One. The Fallen One was attempting to murder Galactus through starvation, destroying planets on which Galactus could feed. To stop the Fallen One, Peter drew on the planetary energies of a small Kree Empire lunar colony, killing 35,000 people in the process (Dick Move #3). So, yeah, ends and means and all that. Peter turns himself and the Fallen One over to the Nova Corps, who are interplanetary space cops and in no way derivative of the Green Lantern Corps. (Honestly, though, I like the Novas better than the Green Lanterns. Please send me your hate mail.)

(Trivia: Yes, that’s the same Nova Corps you’ve seen in trailers. Glenn Close and John C. Reilly as Novas. That seems weird even typing. Feels like I just threw a bunch of random words together.)

Richard Rider of the Nova Corps eventually released Peter to aid in stopping Annihilus and staving off his Annihilation Wave from swallowing the universe. Later, Peter and a motley crew other space-based heroes stopped the cybernetic aliens known as the Phalanx from overwhelming the Kree Empire and the rest of the galaxy. The Phalanx were secretly being controlled by Ultron, who you may remember from this link. 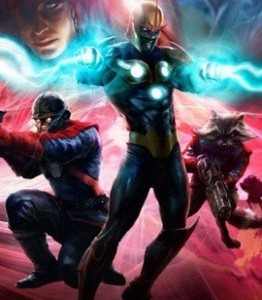 From the motley crew Peter assembled sprang the Guardians of the Galaxy, with members including Groot, Rocket Raccoon, Drax, and Gamora. Y’know, from the trailer. The Guardians help save the fate of the universe time and again, until eventually having to contend with Thanos, the purple-faced fellar from the in-credits scene at the end of The Avengers. Thanos threatened to escape the Cancerverse, a universe where Death no longer holds sway. In order to prevent Thanos mucking up our universe, Peter and the Nova Richard Rider sacrifice themselves to trap Thanos in the collapsing Cancerverse.

Buuuut somehow Peter survived and has rejoined the Guardians to stop threats that would threaten the galaxy. Like Thanos. Who somehow survived. Again.