In FreakSugar’s continuing series “Know Your Guardians of the Galaxy,” we look at Gamora, the badass green alien lady, played by Zoe Saldana, from the trailers for the Guardians of the Galaxy film opening next week. You might remember Saldana from her work as the badass blue alien lady in James Cameron’s 2009 epic film Avatar. Gamora was created by comic book writer and artist Jim Starlin, who was also responsible for the characters Drax and Thanos, the Mad Titan, who will also be making appearances in the film.

If the first thing you thought when you first set eyes on Gamora was “She-Hulk with knives,” don’t fret. I thought the same thing when I first encountered the character in the 1991 crossover The Infinity Gauntlet, which centered on Thanos throwing his hands in the air and killing half the universe like he just didn’t care. As it turns out, Gamora’s story is interesting in its own right and intricately entwined with the genocidal villain. 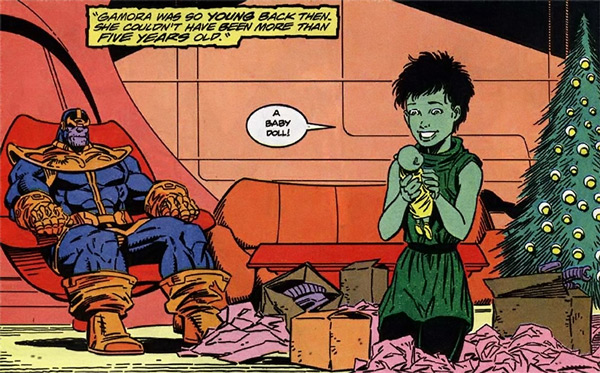 When Gamora was young, Thanos found her after her entire race, the Zen Whoberi, had been wiped out by the Badoon, the same Badoon which had given a young Star-Lord trouble. In short, the Badoon are bastards. Thanos decided to raise Gamora as a weapon, because what’s less creepy than adopting some random alien girl and molding her into an assassin? Thanos trained her in martial arts in order for her to become the “deadliest woman in the galaxy” to assassinate the Magus, leader of the Universal Church of Truth and evil alternate reality version of Adam Warlock. The Mad Titan wasn’t exactly the warmest of father figures, but he did give her a doll for Christmas one time, which was awkward. (And how is Christmas a tradition that extends beyond Earth? Was it more of a Winter Solstice-type celebration? Even that’s problematic. Anyway.) During a visit to an alien planet, Gamora was raped and beaten by thugs, after which she was found by Thanos, nurtured back to health, and given cybernetic enhancements to complement her badassery.

Eventually, Thanos deployed Gamora to dispense with the Universal Church, killing every member and preventing the Church from massacring her race before it ever occurred (because time travel and comics). “But I thought you said the Badoon killed her race?” you may ask. Well, yes, they did, but only to balance the cosmic scales since the Universal Church had been prevented from doing so. Because, again, comics. 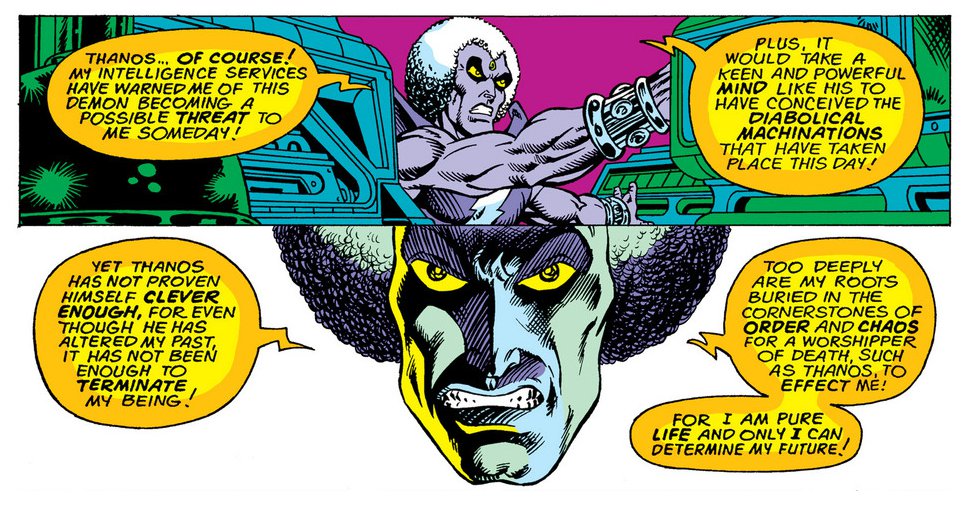 (Sidebar: Can we just note how much a product of its time this story is? The tale was written in the 1970s, when folks across the country were exploring new age and alternative religions and philosophies. The villains are called the Universal Church of Truth, for chrissakes. And the leader is named the Magus, who, incidentally, had a magnificent fro. And Gamora’s race is called the Zen Whoberi, which sounds like an Eastern energy drink.)

Although Gamora missed her chance at killing the Magus himself, she was assigned by Thanos to protect Adam Warlock, Thanos’ sometime-partner in these types of cosmic skirmishes. Gamora, Adam, Pip the Troll (yes, Pip), and Thanos finally managed to put an end to the Magus’ rule, but Thanos’ machinations made Gamora give Thanos a case of the skeptical side-eye. Turns out Gamora was right to be suspicious, as Thanos made a play at destroying the universe, as one does. The combined might of Gamora, Adam Warlock, Pip, and the Avengers managed to curtail the Mad Titan’s plans, but not before Thanos mortally wounded his foster daughter and destroyed Pip’s mind. In order to save the lives of his friends, Adam absorbed Gamora and Pip into his Soul Gem and its Soulworld (which allows him to control all things related to the Soul, natch), and later joined them when he died.

Gamora, Adam, and Pip enjoyed a peaceful existence in Soulworld until the Silver Surfer alerted the trio that Thanos had returned, at Mistress Death’s behest, to wipe out half of the universe’s population. The Surfer explained that Thanos had assembled the Infinity Gems, including the Soul Gem, which essentially granted Thanos the power of a god. (The Infinity Gems are the basically the Infinity Stones that have been peppered through or alluded to in Marvel’s films as far back as the first Thor movie.) Adam found the three recently deceased bodies on Earth using the Soul Gem, and he and his friends inhabited those bodies, using some kind of magic-whammy to make them resemble their previous mortal vessels. Assisted by Earth’s heroes, the trio stopped Thanos, with Adam eventually coming into possession of the Infinity Gauntlet himself.

When the Living Tribunal, a representative of the One-Above-All, decreed that the Infinity Gems could no longer work in concert with one another, Adam assembled the Infinity Watch, dispensing the gems to others for safeguarding. He gave the Time Gem to Gamora, who could only access the power of the gem through dreams and precognition. She begins a romantic relationship with Adam before leaving him and his weirdness to lead a group of female warriors known as The Graces (which, admittedly, was probably a step in the right direction). When the Annihilation Wave threatened to destroy the universe, Gamora stepped in to help. At this point, she’s helped preserve the universe so many times that one more and she’ll get a free universal save.

After helping stave off the Wave, the encroachment of the cybernetic aliens known as the Phalanx, and a resurrected Magus, Gamora helps form the Guardians of the Galaxy. Currently, she serves alongside Star-Lord, Groot, Drax, and Rocket in keeping the universe safe from threats that seem to spring straight from an H.P. Lovecraft fever dream. 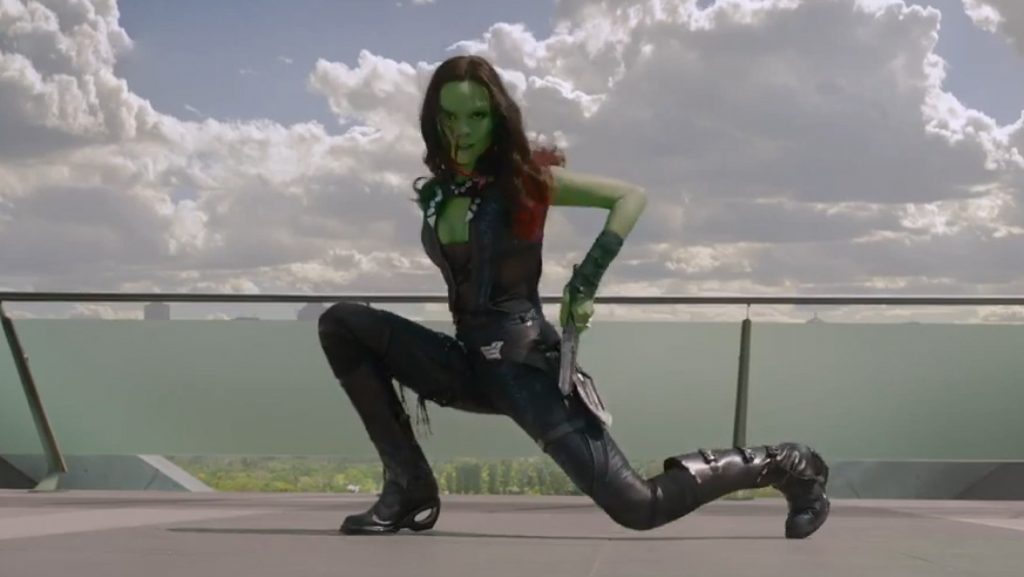 Gamora in GUARDIANS OF THE GALAXY

Outside the comics, Gamora appeared in the first Guardians of the Galaxy film, dispatched by the Kree religious zealot known as Ronan the Accuser to retrieve a small orb containing immense power for Thanos. In exchange, Thanos has agree to destroy the Xandarians, who have recently signed a peace treaty with the Kree. Ronan regards the Xandarians as filth, so he’s not too keen on that idea. Gamora sees both Thanos and Ronan as dangerous madmen and plans to take the orb to a third party to keep the orb safe. While attempting to snatch the orb from Star-Lord–who, in turn, is being pursued by Rocket and Groot for a bounty–Gamora and company land themselves in jail.

The quartet becomes a quintet after they meet up with Drax, who wants to murder Gamora for Ronan’s murder of his family. Unfortunately, the orb land lands in Ronan’s hands, who decides to keep it and take care of Xandar on his own. Boo. Double boo, because we learn that the orb actually contains the Infinity Stone of Power (linking the movie’s narrative to the rest of the films that came before it.) Fortunately, following some madcap hijinks and resolved misunderstandings, the team–dubbed sarcastically by Ronan as the Guardians of the Galaxy–stop Ronan from murdering all of Xandar’s population. (Yay!) Gamora and the team have created the family that they were all missing and agree to stay together.

Baby Groot and Gamora in GUARDIANS OF THE GALAXY VOL. 2

As for Guardians of the Galaxy Vol. 2, we only know a few morsels as to what happens to Gamora, but it does appear she’ll have some sisterly bonding and maybe reconciliation with Nebula (played by Karen Gillan), who was raised by Thanos alongside Gamora after Thanos killed Gamora’s family. Nebula fought Ronan’s side during the battle of Xandar in exchange for Ronan killing Thanos afterward, as she was none-too-keen on her adopted pappy’s experiments twisting her body. So, Gamora and Nebula probably has some catching up to do and hash some things out. Probably. And there was a flirtation between Gamora and Star-Lord in the first film that, from the looks from the footage released so far, will be addressed in Vol. 2. It appears to be a busy film for our favorite assassin-turned-Guardian.

Guardians of the Galaxy Vol. 2 hits theaters May 5.