Ten years after the tsunami and earthquake that devastated Indonesia, what’s motivating an action star to develop a magical realist drama about the disaster? That was my question for martial artist and action star Robin Shou, whose Kickstarter campaign for the feature film Eartbound launched this week.

The actor, stuntman, and filmmaker has numerous credits to his name, getting his start in late 80’s Hong Kong action films like Michael Mak’s Long Arm of the Law 3 before getting the attention of audiences in the west with his role as Liu Kang in the live-action Mortal Kombat.

With Earthbound, the actor is showing a different side of himself as I learned in a recent e-mail interview with Mr. Shou and Gravitate Pictures producer Chris Acosta as both explained how the very private actor decided to approach the fans to help get his next project made.

FreakSugar: It’s clear that Earthbound is very personal to you. What’s driving you to tell this story?

Robin Shou: It’s about love, sacrifice and survival. After my son was born, I realized that I would do anything to protect him. Then I started to think about the people in Sumatra, they were at the mercy of nature. Can we beat the forces of nature? To a certain degree, if you’re love is powerful enough, and if you’re willing to sacrifice and then you’ll fight to the end to survive.

I can’t tell you much [about the story] because I don’t want to give it away. [It] centers on a woman who gets separated from her husband and son when the tsunami hit. She has to find them and when she does, it’s not what she expects.

FreakSugar: What can you tell us then about the characters themselves?

Shou: These are simple people. No baggage or hang ups. What I love about them is that they didn’t know how strong and powerful they were or can be when they’re in the face of disaster protecting their love ones.

FreakSugar: And, Chris, could you give some of our readers a little bit of your background?

Chris Acosta: I spent a chunk of my life on the business side of entertainment, worked at a literary agency, for an indie producer, VP of a Management/Production company in LA, and more recently been ensconced in Silicon Alley with start-ups and advertising executive producer roles. I decided this year to pursue content creation again more hands-on. I became friends with Robin after a client of the company introduced us, and I worked on his behalf as a talent manager for a time.

FreakSugar: What attracted you to working with Robin on Earthbound?

Acosta: When I managed Robin I focused on his acting career, in fact, there was an episode of the X-Files that I was able to get Robin in the mix on at one point but he was busy pursuing his passion project, the directorial debut called Red Trousers: The life of the Hong Kong Stuntman from San Francisco-based Tai Seng. He pulled it off and I always remembered that I did not support it as high as I could have as I was focused on his acting career. I always remembered that so I wanted to help on this one when we reconnected earlier this year.

FreakSugar: What do you think will draw western audiences to the story?

Acosta: I think that as of late, perhaps it is the degree of turmoil that is out there in the world, at least what the media seems to inundate us with for ratings purposes, people are interested in stories with spiritual themes more and more. Particularly Western audiences, that and the factual aspects of the story combined I feel make for a powerful, compelling piece which we hope will get attention. That’s what drew me in to work on it (outside of the desire to fulfill my friend’s passion project).

FreakSugar: And Robin, you note that the impact from the disaster is still being felt almost a decade later. What does life in post-quake and Tsunami Indonesia look like?

Shou: No one really talks about it. Everyone wants to move on and live quietly and normally. The lasting effects will always be with them especially those that lost someone dear to them in the event. Think of a very close family member that passed away, you’ve done the grieving and have moved on in your life. But it will still hit you once in awhile that that family member is no longer with you.

It’s a very empty feeling and it’ll stay with you for the rest of your life. For example, parts of Sumatra where coastlines were moved 50 feet, I think people forget that it was one of the most powerful earthquakes ever recorded. The entire Earth shook for few seconds, every part of the earth was moved a full centimeter. The sheer post-traumatic stress of it lingers to this day in the region.

FreakSugar: The campaign notes that Eartbound will contain elements of magical realism. Could you discuss how it’s used in the story?

Shou: The magical realism is exactly what it means. I love filmmakers like Terence Malick, where the imagery borders on the surreal. The story and characters are dealing with events that are outside the ordinary and the film’s script and what I plan with Oscar-nominated and gifted cinematographer Andrzej Sekula, who is consulting on the project now and we meet regularly, to bring reality and frame it with a visual style that majestic and magical.

Survival is in its own way a type of magic we conjure in life. 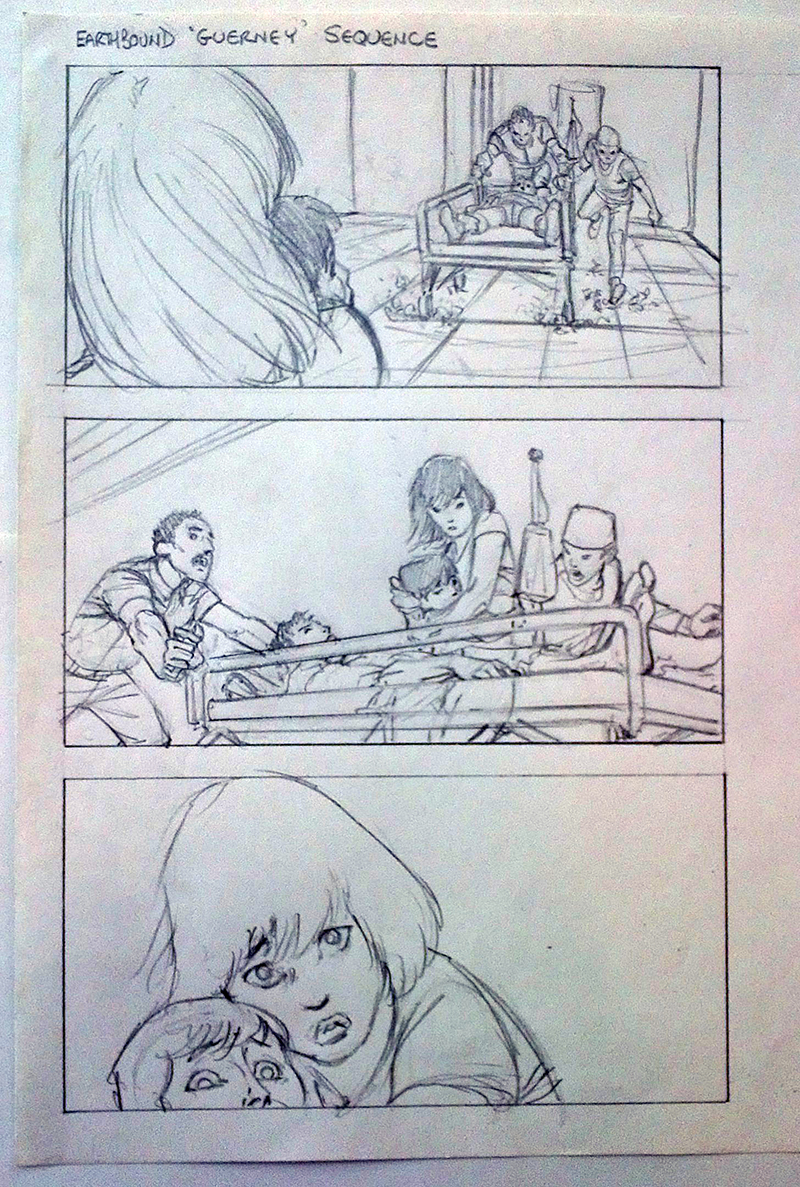 An early storyboard for Earthbound.

FreakSugar: What was the genesis of the story?

Acosta: It’s pure Robin, a drama which is set against impossible odds. The 2004 disaster in Indonesia is something that touched Robin a great deal, he wanted to tell the story of local people, something that has not been the focus of any other projects that we are aware of as of late. Robin also wanted to add unique elements that highlight the themes of family and spirituality in the film.

FreakSugar: Where will you and your team be shooting? What’s the current status in terms of cast and preproduction?

Shou: I’ve gone to Indonesia to do location scouting. I love it there. And for now, there are two location I’m considering: one is Anyer and the other is Tanjung Lesung, both outside of Jakarta.

We are working with some amazing people, the score is very important, as you can hear in the trailer we cut for Kickstarter also. We are moving forward confident that the funds will be there to help make the film the best it can be. We are casting local actors and will announce them to exclusively to our backers first. My producer is thinking about involving the backers in the casting process via surveys and updates on that platform.

Acosta: We’re planning on shooting in Asia, primarily due to the cost efficiencies there and Robin has some great connections there on the ground who he’s scouted locations with as well. We’ll be shooting on the RED, and we enlisted a talented composer from television to provide a score based on the script so far. I also enlisted Oscar-nominated cinematographer Andrzej Sekula (Reservoir Dogs and Pulp Fiction) and he and Robin have been working very closely in LA in preparation for the shoot in August.

Shou: I’m a very private person. I don’t use Facebook or Twitter. I didn’t know what Reddit was until my producing partner told me about it. For me to come out like this shows you how important this project is to me. For the most part, I really enjoy the Reddit and will continue that dialogue through the Kickstarter.

Acosta: Robin is a VERY private person and coaxing him to even pursue Kickstarter was a challenge. He is a very humble and grounded person, so the concept of asking for backers is new, from anyone really. I thought that a way to help get the word out would be to connect to that community for the run of the campaign. It’s tough because Robin is prepping and living his life with his family, so time-wise it can be challenging, but he is engaging on thoughtful questions that he feels fans would enjoy the conversation.

FreakSugar: Finally, we’re nearing the 20th anniversary of the first Mortal Kombat. What was it like kicking off the video game adaptation boom?

Shou: It was new back then, a little bit like, for me it was one of the best experiences, next to being a father. It is an honor and the fans are great as I am rediscovering on Reddit, which has mostly videogamers, from what the comments have indicated.