Editor’s note: Please welcome new contributor Luke Y. Thompson, who will be talking all things toys with us at FreakSugar!

Everybody wants a piece of that sweet Funko Pop action, but nobody else seems quite able to execute that same magic. From LEGO BrickHeadz to upsized Mez-Itz (a line originally made to compete with Mini-Mates when those were the trend), cute-style versions of ubiquitous characters rendered with massive noggins and enough stylization to bypass likeness rights are the new market segment every company wants a part of. Even McFarlane Toys tried, with the terribly named BumBumz.

Now it’s Kidrobot’s turn, and given their success with blind boxed, simplified articulated figures across multiple properties, you might think they’d have an edge. Especially with their parent company, NECA, giving heft with licenses they already hold. But some really bizarre decisions made here will either make this line an off-center hit, or just confuse collectors. We’ll have to wait and see which way it goes. 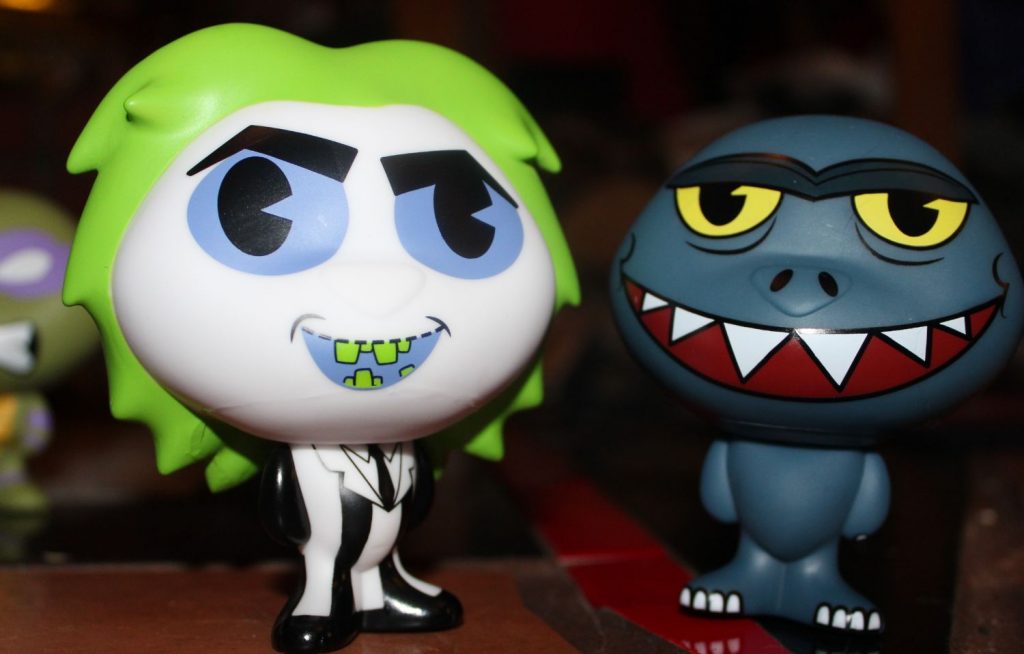 These vinyls are called Bhunny, and the gimmick, as one might expect from that name, is rabbit related. But not in the obvious way one might think. Considering the existence of Bearbricks, which stylize characters as bears, and Disney vinyls that give every character Mickey Mouse ears, Bhunny ought to make every character into a bunny. Wouldn’t you think? But it only sort-of does. There’s a Superman-shield/Zantac-shaped bunny nose built into the sculpt…and each character has a little rabbit tail on their butt. 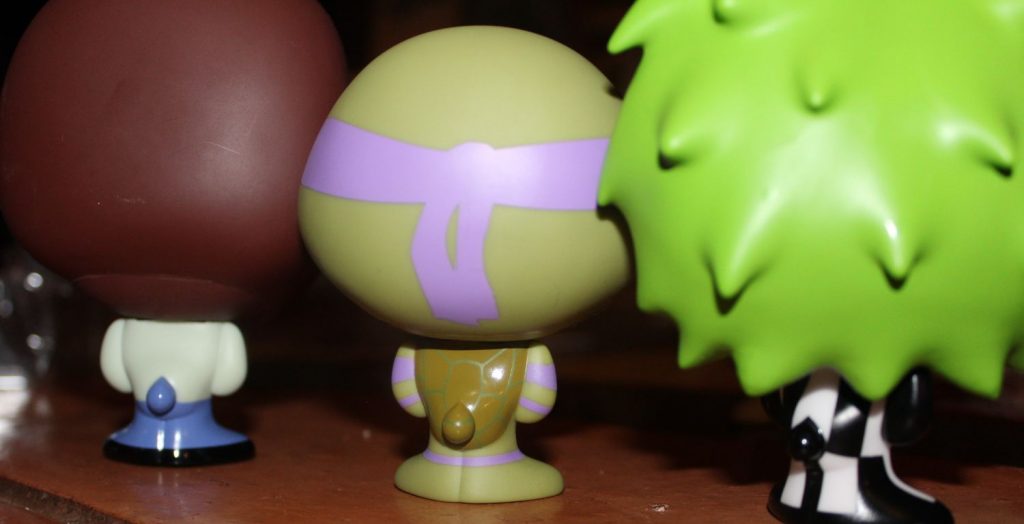 Except Hello Kitty and Godzilla, who already have tails. 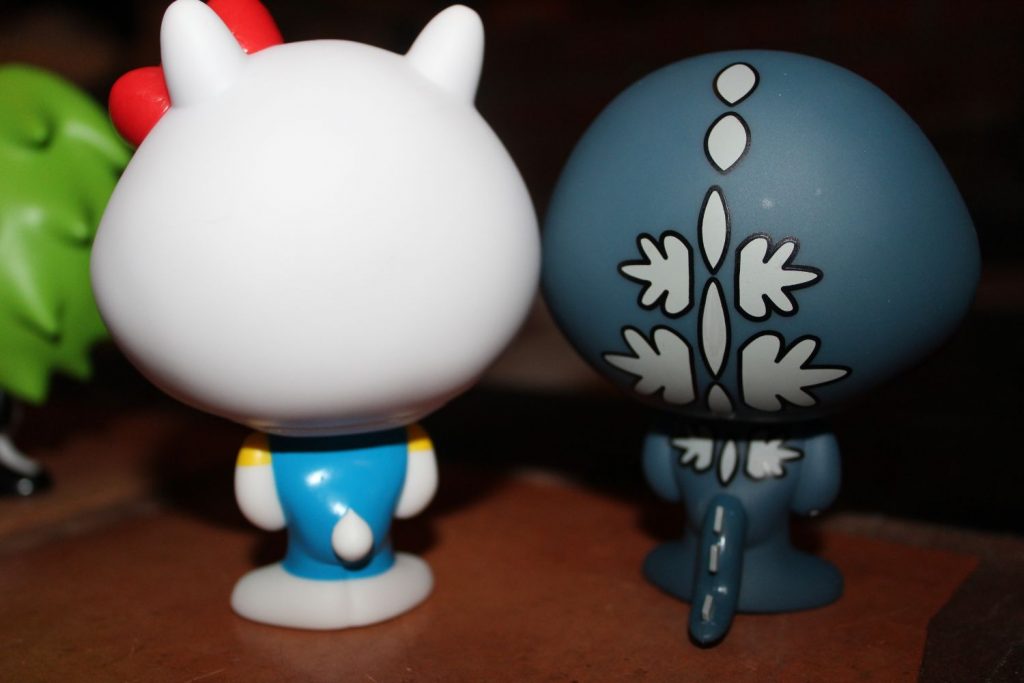 But wait…there is more weirdness. Each Bhunny comes with a “lucky rabbit’s foot” keychain in appropriate colors, and, occasionally, deco elements. This is flat-out strange on many levels. First, it implies a severed hand from the character. Second, who needs multiple key chains with exactly the same sculpt, in slightly different colors? One or two are fun. Five already feels like too many. 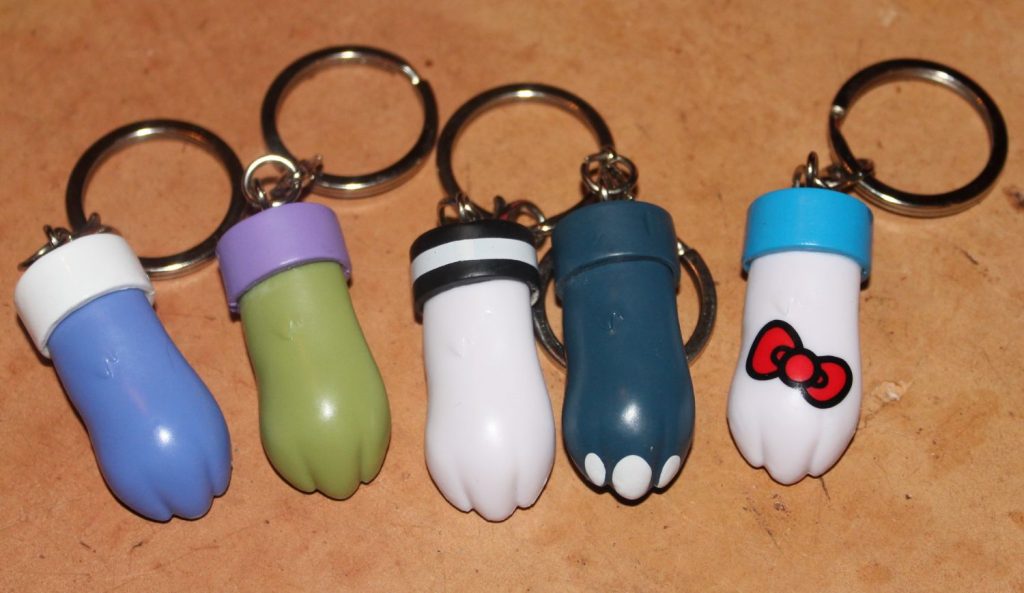 The backs of the boxes show other related characters, and it is worth noting that Shredder appears to have bunny ears. But he’s the only one. Also perhaps notable is the fact that Beetlejuice, like NECA’s Toony Terrors version, is cartoon-styled based on the movie rather than the actual cartoon. Which suggests NECA might once again have that license and consider an “Ultimate” movie figure at some point. 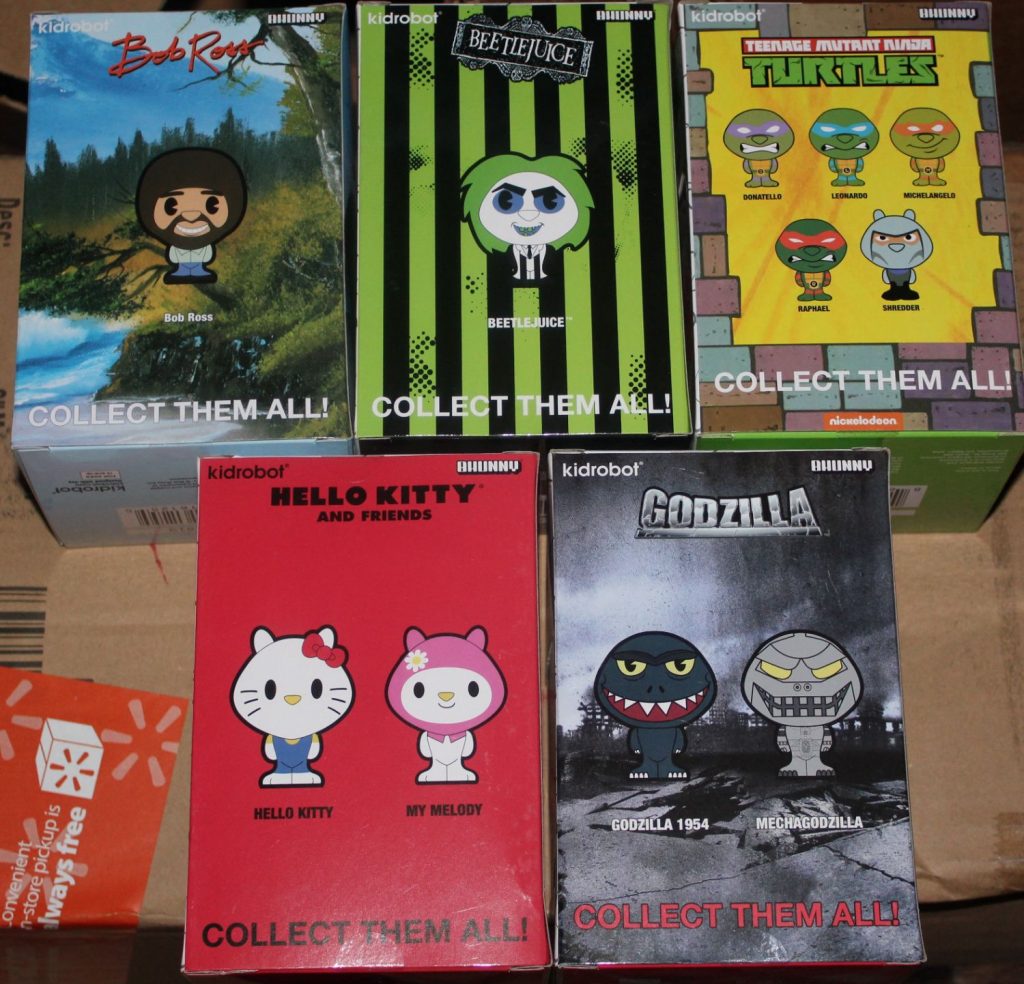 And here’s a minor note about the bunny nose: it makes the TMNT look more like the two recent movies where they did, in fact, have visible noses. This might be as close as NECA ever gets to making those. 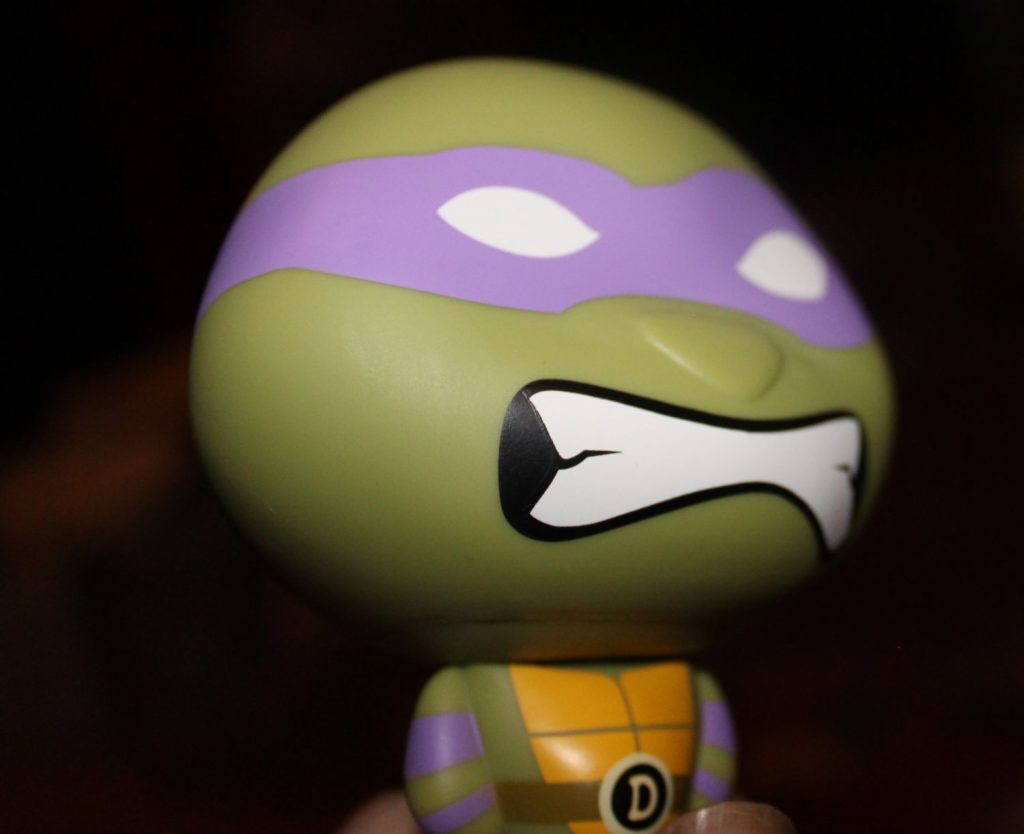 The figures come packed in a plastic tray that opens up and, save for the bit of tape on the outer box, is totally resealable. 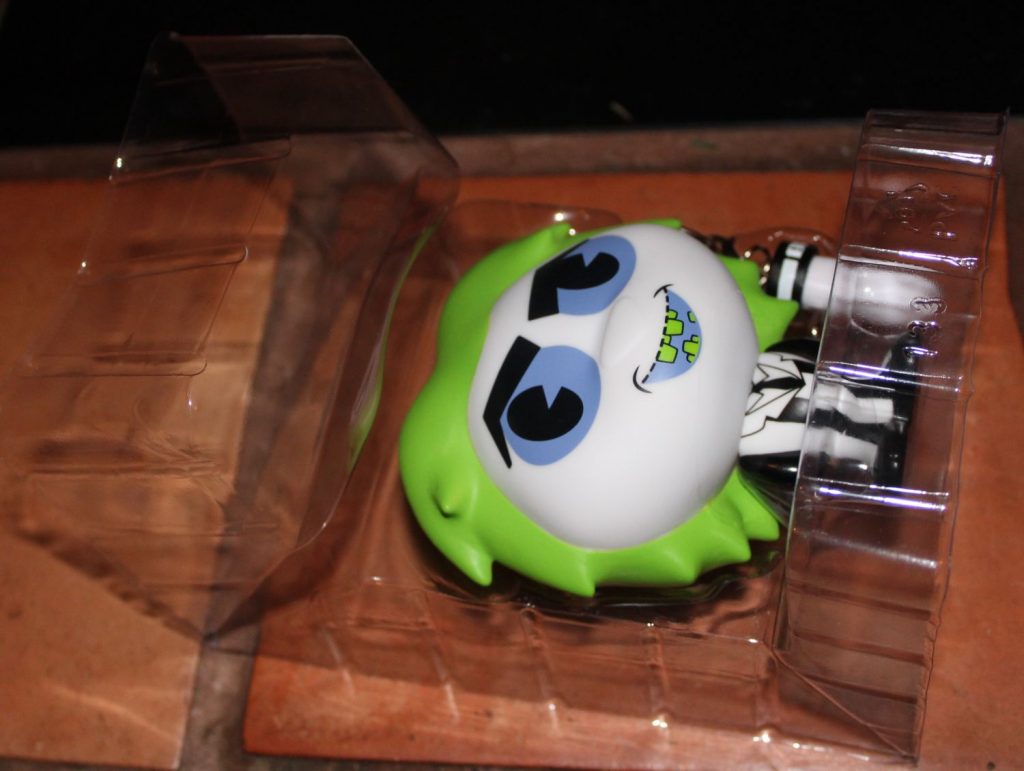 As far as size goes, here’s a picture next to a 1/12 WWE figure of Aleister Black. 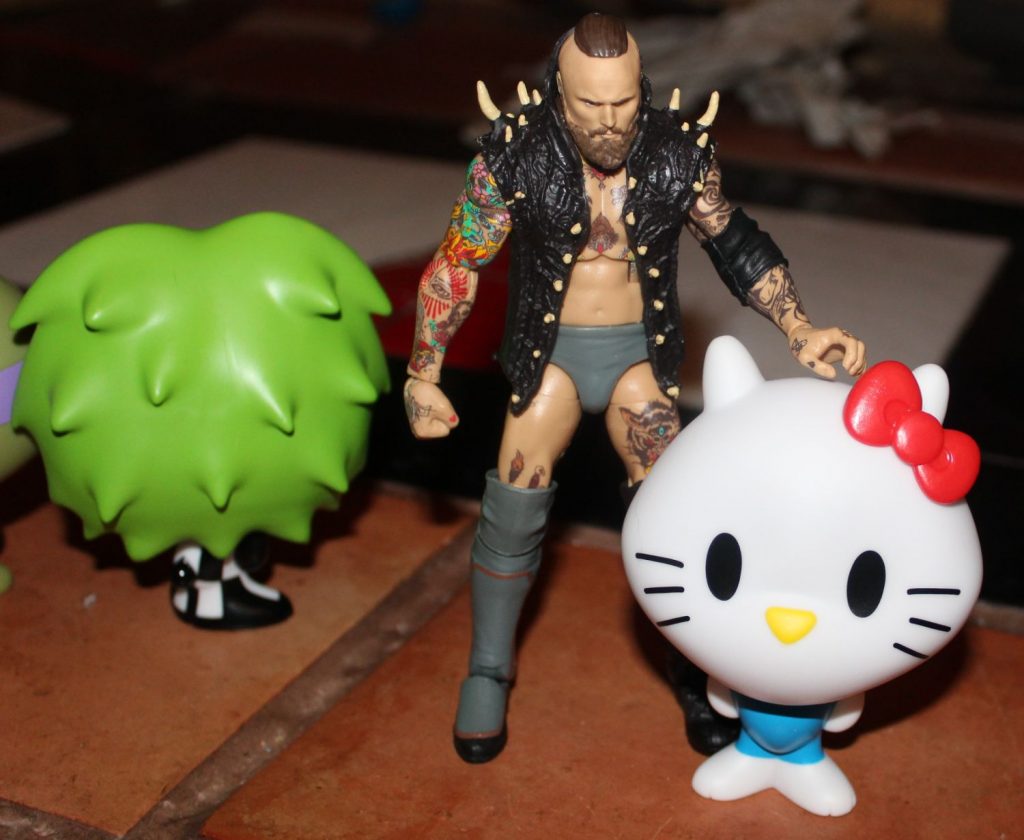 Pricing isn’t exactly competitive. Kidrobot has a five-pack available on their site for $70.95, which amounts to about $14.23 a figure. Presumably the keychain ups the cost, but these ought to be $10 figures at most. They have one point of articulation: at the neck, as one would expect. That said, eBay prices are considerably higher, so collectors and speculators may be seeing more in them than might be apparent to the casual eye.

As one-off gifts, they probably function best. Know somebody who only collects Hello Kitty? Then two Hello Kitty Bhunnys will probably be well-received. What seems less likely is the notion that many will start wanting to collect every Bhunny as a complete line. Each one is a different take on an individual character you may like. But collectively, how many identically sculpted keyrings do you really want?