With Sony’s The Amazing Spider-Man 2 arriving in theaters last Friday, director Mark Webb has introduced a whole host of new villains to test the resilience of Marvel’s friendly neighborhood wall-crawler and set up future films to feature The Sinister Six. Spider-Man’s publication history has a multitude of stories from which to pluck potential adversaries for ol’ Web-Head. However, Spidey has been in Marvel Comics’ stable of characters for 52 years, and as such, not all of the villains are necessarily going to be gold in terms of translation to the silver screen.

While the music and fashion of the 70’s are enough to send anyone into panic attacks and murder spasms, the Hypno-Hustler is a villain whose main power, at first glance, seems to be to make heroes piss themselves with laughter as he disco dances his way toward them. As lead singer of the band The Mercy Killers, Antoine Delsoin used his music equipment to hypnotize club patrons to abscond with their valuables. While I’m as terrified of white leisure suits as the next person, I feel that any villain who can be defeated by removing his protective headphones just isn’t going to grab film audiences. And nobody wants to see Spidey do the Funky Chicken (again?) while kicking the ass of a degenerate with ambition issues. Also: Why didn’t I make a joke about his band giving the Hypno-Hustler a mercy killing? I mean, low-hanging fruit, folks. 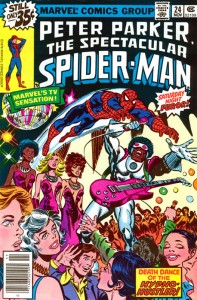 I love alliteration. Who doesn’t, really? However, the moniker Paste-Pot Pete doesn’t hit me as the best choice to strike fear in the hearts of the innocent. (Also, PPP, a tip: Using your real name in your supervillain codename is no bueno if you want to keep that incognito thing going.) Triple P began as a member of the Fright Four, which coincided with an illustrious career of having his ass handed to him repeatedly by the Fantastic Four or Spider-Man, depending on the day of the week. As his name suggests, Paste-Pot Pete’s abilities boil down to using a really strong glue to trap his foes.  Maybe that’s why he eventually took on the more dignified handle, The Trapster, and at one point was in the Sinister Six (the only member of this list to do so in the comics). While the visuals of The Trapster using sticky white stuff on Spider-Man provides an opportunity for hilarious innuendo, I doubt that anyone would be captivated by a walking Elmer’s Glue bottle. 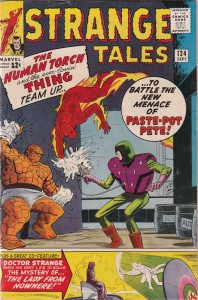 STILTS! Stilts evoke images of acrobatic walkers, the fun and excitement of the circus, and long-legged Uncle Sams loping down parade routes. So it stands to reason that, when choosing a theme for pursuits as a ne’er-do-well, the first thing that would come to mind would be, “Screw it, stilts.” Scientist Wilbur Day stole designs from his employer to create hydraulic stilts and a battle suit to commit robberies. Now before you roll your eyes, just hear me out. Stilts are badass, y’all. Stilts enable you to be taller than you normally would be. You can keep things out of reach out of shorter heroes. Unless, I suppose, they can fly. Or swing across the buildings. Or can grow in size. Or have a really big pole to trip up the stilts. So unless Stilt-Man encounters any of those heroes (which only comprise about 97% of the heroes out there), he should be golden.

There have been several iterations of Stilt-Man, but the original, Wilbur Day, first appeared in Daredevil #8, 1965. 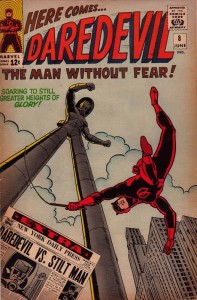 When I think “big-screen cinematic supervillain,” of course, I think “corrupt businessman who has giant mechanical assembled wheel to dispense revenge on a kid supervillain who saved him from attempting suicide then mocked him after said attempted suicide.” And Hell, make the guy’s real name Jackson Weele because, y’know, comics.

Ed note: The Wheel vehicle did make it into the Sinister Six in the comics, but in the possession of Overdrive, not Big Wheel himself. 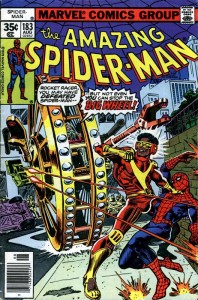 In a comic book world of thunder gods, men in iron suits, and folks with the proportionate strength and speed of a spider, adopting a frog theme for supervillainy seems to be a natural choice. And not everyone has green cloth or springs for shoes for jumping, so it takes a special kind of person to be a supervillain frog. To make his background super-credible, he was a failed novely toy maker, who then invented coil springs that allow him to jump hundreds of feet. You’d think that would be the invention he could have sold, if he only didn’t use them to turn to a life of crime… 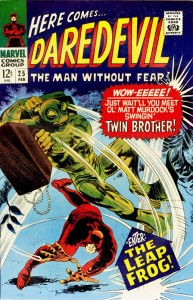 This one is a bit of a cheat because, on the surface, Swarm is exactly the kind of villain that comic books were made for. The guy is a Nazi scientist whose consciousness is housed in a swarm of bees. He sports a purple hood and cape and basically tries to shatter your world using the bees that compose his body as his minions. In theory, I unabashedly, unapologetically, without-a-trace-of-irony love this guy. He is one of the goofiest, balls-out creations that Marvel has ever thrown at readers. (It helps that he first appeared in an issue of Champions, a book that I suspect nobody was reading, not even the writers, so the creators could just pour whatever they wanted on the pages and nobody would say boo.) I am usually one of the first folks to deride an eye-roll-inducing character as being uninspired or insipid, but damn, I love Swarm. I explained the concept to my wife and even she agreed that he sounds cool. And she’s difficult to impress.

Any character who can be defeated with an EpiPen and a can of Raid ain’t making it into a Spider-Man movie. Maybe in the Japanese Spider-Man series, though. Have you seen that? That stuff is crazy loco. 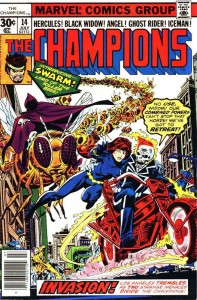