Anyone who has been to one knows that the American shopping mall is a locale rife with potential horrors: people moved by consumption—of both food and products—as well as, now more than ever, disease and the apathy with which many people regard its prevention. Author Adam Cesare knows the creepiness that a mall can holds and brings it to his original comic Dead Mall this October from Dark Horse Comics. Written by Cesare with art by David Stoll and lettered by Justin Birch, Dead Mall follows five teens who explore a mall set for demolition, but encounter more hellacious horrors than they bargained for. Just in time for Halloween, Dead Mall looks to bring the spookiness and frights that horror comics fans crave.

Mr. Cesare spoke with me recently about the idea behind Dead Mall, the influences of the story, how the mall as symbol of commercialization has changed over the years, and mall horror as a subgenre. 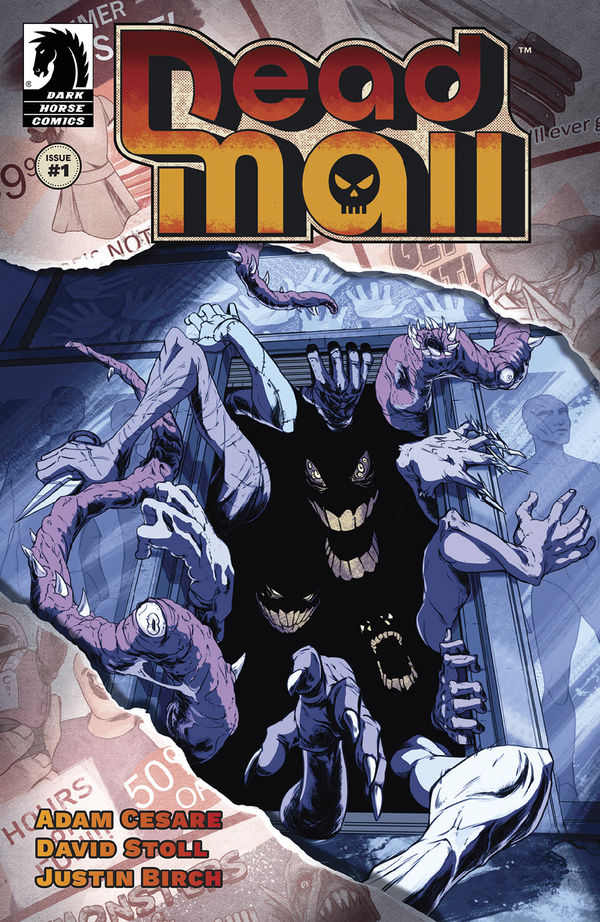 FreakSugar: For folks who are reading this, what is the conceit of Dead Mall?

Adam Cesare: Dead Mall is about a group of friends who break into an abandoned shopping mall, after hours, and find that they can’t leave.

Oh, and also they aren’t alone.

There’s cosmic horror. Survival horror. Monster horror. There’s a lot of different shades of horror in here, but more than all of its component parts, the team and I really wanted the book to work as *mall horror*. Which is a pretty slim subgenre, but, to me, it is a subgenre, not just a setting.

FS: Who are some of the characters we can expect to meet in the series?

AC: In a lot of ways Dead Mall is about transformation. We start with a cast of teenagers, who I love, but by the end of the four issues they’re very different people. And I don’t just mean their arcs. So I don’t want to get too deep into character bios, because in some way those are twists, who these kids turn out to be, when they’re thrown into a crisis situation.

What I will say is that my favorite character in the series, and I suspect it will be for a lot of readers as well, is the mall itself. And I don’t mean that in the allegorical “New York is really a character in Scorsese’s films” kind of way. I mean the mall itself is the narrator of the book and is a very active character. 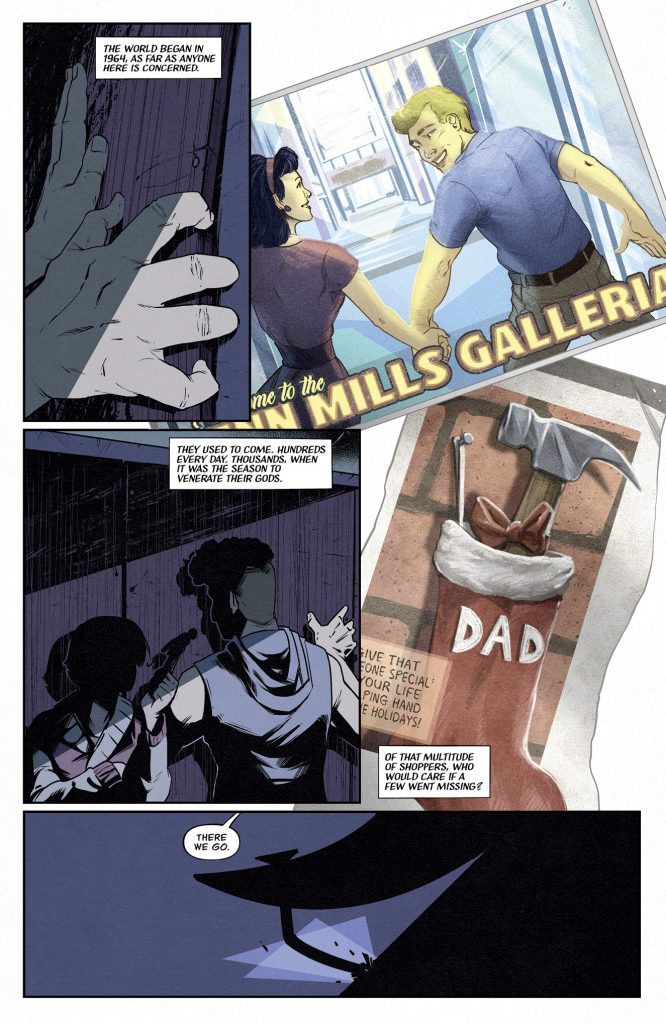 FS: This book is just in time for spooky season. What are the origins and influences for the book?

AC: I mean, this is my season, this is when I come alive, so I’m so happy we’re launching the week of Halloween.

I pitched the book as “The Ruins meets Nightbreed meets Chopping Mall” which, in some ways is a bad pitch, because you’re really hoping the editor has familiarity with at least two of those things, for the book to have any kind of chance.

So that “ensemble, single location survival horror” vibe from The Ruins, the “a world/community of awesome looking monsters” DNA strand from Nightbreed, and the “mall fun after hours” element from Chopping Mall. But when you mix all those ingredients together, I don’t think it feels derivative of any one thing.  Or at least I hope it doesn’t.  Ideally the Penn Mills Galleria is its own thing, a world that can surprise and scare.

Funny enough, when you talk mall horror, the elephant in the room is Dawn of the Dead. And Romero’s film (and its comic book progeny) have had a huge influence on who I am and how I write. But I’m very careful not to use it as a comp.  My only note on the first cover was “we need a lot of monsters and tentacles, people can’t think we’re a zombie book just because we’ve got Dead in the title.”

But Dawn’s influence was less direct, because I think of Dawn of the Dead as the be-all-end-all comment on commerce in America. Or at least commerce in America at the time. But now things have changed a bit, malls aren’t a symbol of our complete absorption into dull, mindless monoculture. If anything malls are the underdog now. There aren’t many places for young people to gather, as every mall is bulldozed for condos or open-concept offices. Which is something we touch on in the book.

FS: What has the collaboration process been like on Dead Mall?

AC: A dream team. Which is I’m sure how a lot of people answer questions like this, but it’s true. And not just between me and David Stoll, who’s super collaborative and communicative and inventive in how he’s approaching the art. But just soup to nuts, from the very first emails I’ve had with my editors to the last email I was just cc’d on from Dark Horse’s promotional arm.

And, me and Stoll: I think there are a lot of artists who’d be like “why is this guy DM’ing me dozens of photos of vintage malls?” but Stoll and I are *excitedly exchanging* pictures of vintage malls. So it’s a great match. 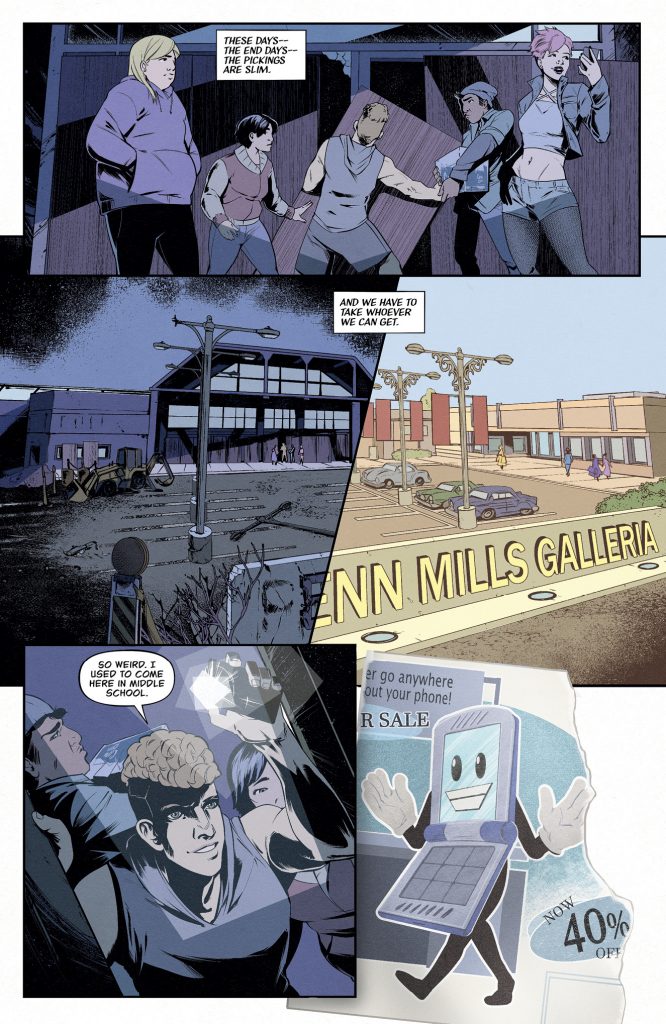 FS: Following up on that, what discussions did you have on what you wanted the atmosphere and look of the book to be?

AC: Well we open in, as the title suggests, a dead mall. Which is a creepy setting, long shadows and stark concrete. But in later issues we see what the mall was like through the ages, in the 60s, 70s, 80s, etc., which is a tricky thing to do, because it’s a horror comic and you want to stay scary, even when you’re in a clean well-lighted place. But I think from the very first pages of issue #1, Stoll’s art and colors have set a tone of “we are taking this setting and vibe very seriously.” So things get to be uncanny and a little creepy, even in the shiniest and happiest panels he draws.

FS: Is there anything you can tease about what we can expect in the series moving forward?

AC: However you think the story’s going to wrap up in issue 4, you’re probably incorrect! I just hope you’ll take the ride with us, add us to your pull list, because we’ve got such bargain price sights to show you.

Shop Til You Drop!

The Penn Mills Galleria is about to be demolished. Five teens sneak into the mall to take a last look around before it’s gone. However, while Penn Mills has been closed for years, the mall is far from abandoned. A night of exploration becomes a shopping spree from hell. The teens must contend with the sprawling, transformative cosmic horror of Penn Mills or be trapped forever within the Dead Mall.

· Adam Cesare is a critically acclaimed horror author and is a leading voice in the emerging genre of contemporary YA horror.

· Clown in a Cornfield, earned a 2020 Bram Stoker Award nomination, multiple starred reviews, and has been optioned for film.