For most of us, Halloween is all about the tricks or the treats, but for TV exec Ted Biaselli it’s all about toys. Specifically, his incredible Instagram account and annual 31 Days of Halloween pics. If you’re not already following him we’ve collected all 31 right here for you, but as soon as you’re finished here make sure you add him on Instagram (or Twitter where he also shares the pics) @animateted, because he doesn’t limit his photographic creative prowess to October and we could build a gushing gallery for Ted just about any week of the year.

We’ll take a quick break from seething with jealousy at his work on the socials and give you a little bit more background on the man behind the camera. And then you can seethe along with us.

Most of Ted’s background spans a 15 year career in children’s television, primarily in development, but he also does things like VOICE #*@&ING LOKI on Marvel’s Super Hero Squad. Ted was the executive in charge of developing some of the former Hub Network’s most successful programs, including two-time Emmy Award-winning R.L. Stine’s the Haunting Hour: The Series, and the Emmy-nominated The Aquabats! Super Show!, as well as Transformers: Prime.

Prior to joining the Hub Network, Ted worked in development at Disney Channel where he was a part of the team that launched Disney XD. He also started Disney Channel’s digital series team. If that’s not enough his other projects include working with the original Mistress of the Dark, Elvira, writing and producing the 2011 revival of her classic series Movie Macabre, her all new live shows for Knott’s Scary Farm, and her 2014 series for Hulu.

Ted was kind enough to chat with us about how he creates his shots, what some of his influences are, and the scope of his collection.

FreakSugar: Tell us about how the idea to do 31 days of Halloween toys pics came about

Ted Biaselli: Well I love toys- and I love Halloween. It dawned on me that I had many many toys that could be considered “spooky”. So I thought it might be a neat thing to try and commit to do. I did it last year and it doubled the number of my followers. I made sure to diversify the subjects to get as broad of an audience as possible. So I included pictures of Elvira, or Halloween Smurfs, or Vampire Hunter D, or Monster High, or The Munsters, or Lego zombies.

FS: What is it about toys that draws you to them? What got you into collecting?

TB: For me, it always starts with character or story. Everything I own is based on some sort of narrative that I love. And because I love it, I want the physical embodiment of it. Of course I love the aesthetic and artistic value of toys as well. Design is also something that draws me to them. But ultimately it’s the character. For example, I love He-Man. It’s the brand for me. From minicomics, to Filmation, to Mike Young, to the movie, that world, those stories, and those characters resonate with me. Therefore, I want every incarnation of those characters. Whereas, with something like Star Wars, I’m primarily interested in original trilogy characters. There are a few prequel things that I like (Darth Maul, Greivous, Luminara Unduli) but ultimately those stories didn’t engage me the way the original trilogy did. It’s not a matter of nostalgia. There are plenty of new characters and stories being told that inspire me, but the prequels just didn’t. I went to the Toys R Us midnight sale when all the Episode One toys came out. Spent a fortune. Bought every single piece. Then after I saw the movie- I took them all back!

FS: Whats the size of your collection? What are your most prized pieces?

TB: I have thousands of figures. Every piece featured in my Instagram is mine. I haven’t done a full tally, but it’s pretty high. Ya know when you grow up, and get a real job, some of us try to fill in those gaps and hunt those white whale items that eluded us as kids. I’ve been on a tear to do just that. I have a loose complete Spinnerella, a MOC Blank from Dick Tracy, A Tiamat with its original Box, and a loose, complete Scratch from Teenage Mutant Ninja Turtles. Those are some of my holy grails. I’m still missing the MOTU Giants ONE DAY!!! Other prized possessions that may not be “valuable” are my Sectaurs, Inhumanoids, my massive Smurf collection, and my Animated DC lines from the 90s.

FS: The pics are amazing, tell us about how you set them up? Set, props, lighting, photoshop, etc.

TB: Thanks man. All the set ups are practical. I don’t shoot them against green (or white) and Photoshop in a background. I build dioramas or compile sets with elements of playsets, accessories, or found objects to create a scene. Scrapbooking paper is also my friend. You can get a very interesting background with a simple sheet of paper.

All the lighting is also practical. I buy miniature LEDs in a variety of colors and position them all over the “set.” I have overhead lights on a dimmer, and various miniature spotlights. I also incorporate laser pointers. But while some of the effects may be digital, the lighting is practical. Take the Cryptkeeper pic that was the October 1st entry this year. I set up the VanHelsing Dracula’s castle playset as my set. I furnished it with lots of Buffy the Vampire Slayer accessories- Books, jars, and of course candles. Now I knew the candles were going to be lit digitally. There are some great apps out there like LensLight that helps with that. But the light “emanating” from them had to be practical. So I used an amber LED light pointed in the direction the candles would be glowing. I then wanted some color to fill the background. And Purple and Green just seemed like the best combination to make ol Crypty pop. You can see the BTS photo here: 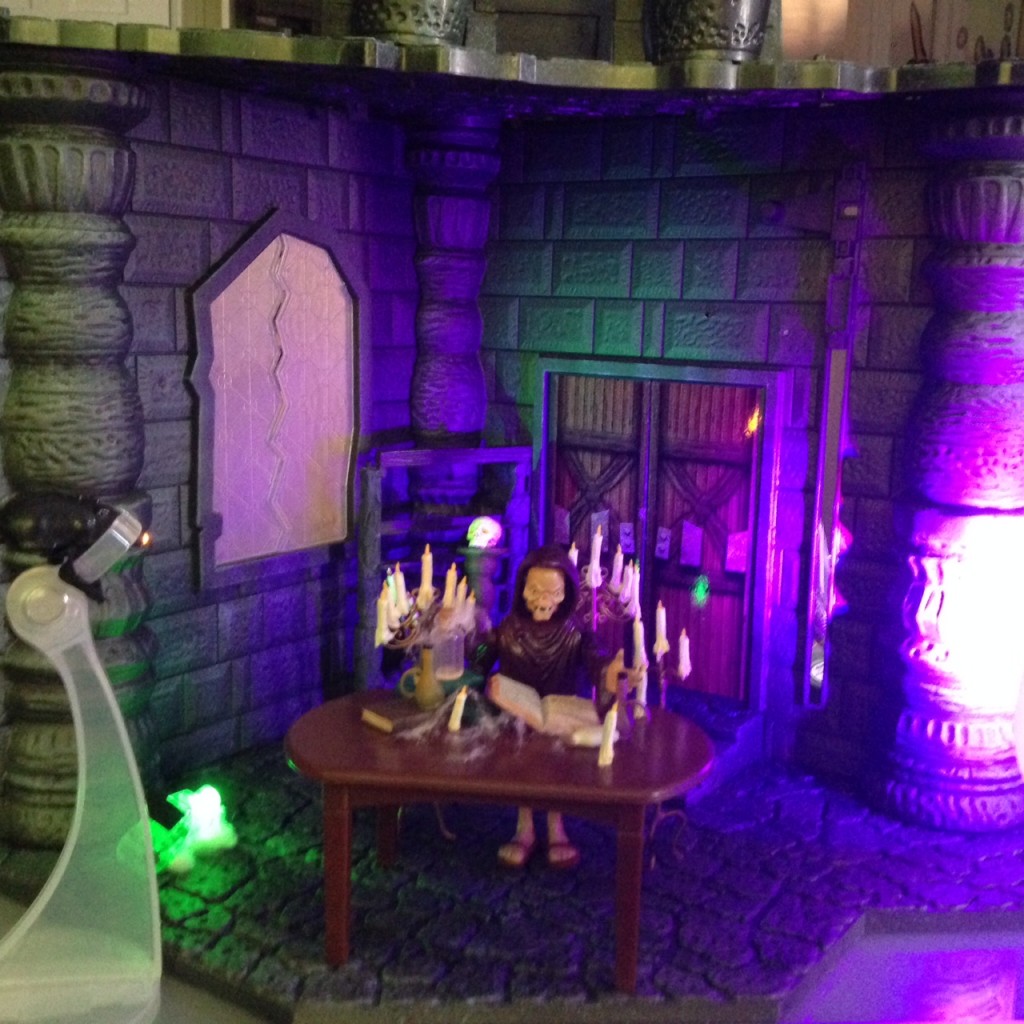 FS: How do you decide which ones to do?

TB: Typically I’m inspired by going through my collection. I’ll pull out something I haven’t touched in a while and then think what would be the best way to showcase this figure. Or how can I tell a story in a single image. A picture that didn’t make it into my Instagram was the Henry Beemis figure from the Twilight Zone line from BifBangPow. I love that line so much, they can make as many as they want, and I’ll buy em up. I wanted to convey an iconic image from that episode in one pic. I think it’s ultimately successful, but the other three twilight zones I had done were just better. 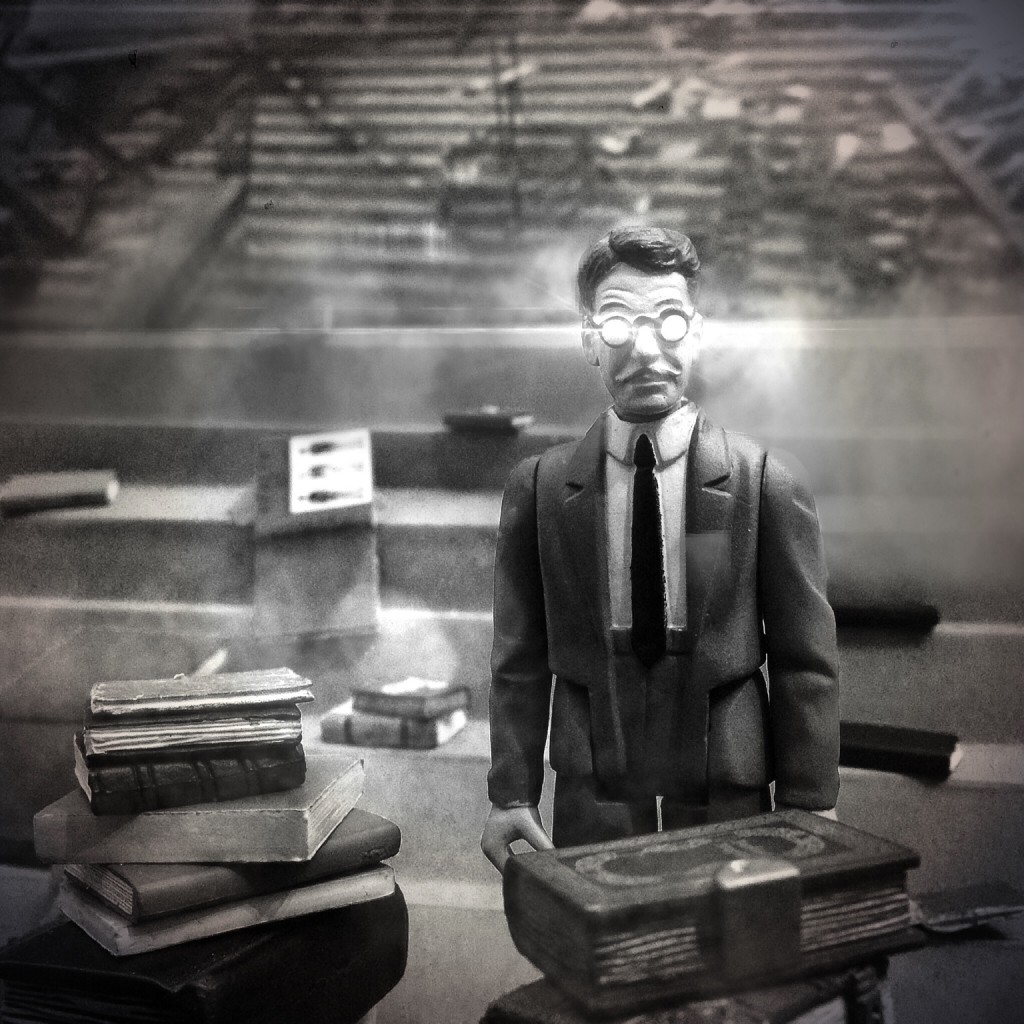 I also try to give myself themes. Holidays are great. I’ll do another 12 days of Christmas this year. My Disney week was a big hit. My Gummi Bears pic alone got 280 likes… That’s the most of any pic in my feed! And it was thanks to Instagramer @Sourpieman that I found out those figures existed! I’m also planning on doing an entire month of African American action figures in February for Black History month.

FS: What are your favorite toy lines out there now? Any pieces you’re dying to get your hands on and haven’t been able to?

TB: Well, MOTUC without a doubt. I mean, really. That line had absolutely everything going against it and has managed to survive- and thrive! I am also obsessed with the new ReAction lines. I’m showcasing them a lot in my gallery. The horror series is my favorite, and I LOVE that we got Sam from Trick ‘R Treat. I wanted him to be the finale for Halloween. I love Mike Dougherty’s movie so much and that figure is just so great. They can’t make more of those fast enough. I also love all of the stuff coming from SA FiguArts and Figma. The Sailor Scouts, the Nintendo characters, Michael Jackson!!! I swear I will buy every single Michael Jackson figure they make. I’m publicly begging for Captain EO!!! And I also have every single Integrity Toys Jem Doll. I typed that without a hint of shame or embarrassment, they are phenomenal.

FS: Do you have any creative influences for this project?

TB: Hahahha. I guess each one is inspired by something that reminds me why I love being scared. A great movie or cartoon, a character or a story or even a real person like Stephen King! I love the popular arts. We are in a golden age when television is as artistically relevant as cinema, or an obscure film from 30 years ago can get a cult following or an animated series that’s been running for 25 years can still get a new toy line! All of that comes together and I want to be able to physically represent my love for that story or those characters. And thank goodness there are others out there who want that too. And companies who can profit from our need to showcase our passion. 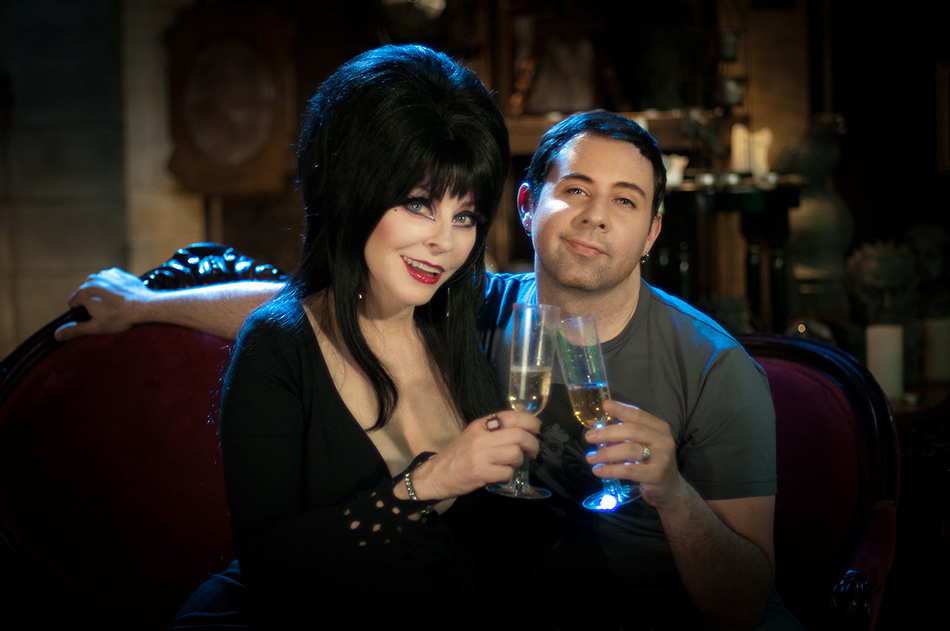