For hundreds of years, the Bible has inspired theologians and philosophers, writers and artists, to interpret and reinterpret the stories and tenets therein, in hopes either of understanding the writings more fully or to use them as a lens to reflect on humanity in general. Satirists also have thrown many an eye at the Bible, from Mel Brooks to Voltaire to Kevin Smith, all wrestling with biblical texts as a way to comment on religion and the world at large.

Writer Mark Russell is no stranger to adapting biblical tomes in his work. Following up on his book God Is Disappointed in You, Russell looks to apocryphal texts such as the Gnostic Gospels and the Midrash to put his own comical spin on the Bible, both to entertain and to inform. Mr. Russell spoke to me recently about the genesis of Apocrypha Now, how his background influenced the project, and what he wants readers take away from their reading of the book.

FreakSugar: For folks who might be considering picking it up, what is your elevator pitch for Apocrypha Now?

Mark Russell: Apocrypha Now is like the Bible, but even weirder. You read some of these stories about dragons and giants and magic battles and you can understand why they left them out of the Bible. Other stories are so moving and profound that you feel like they were left out precisely because they were so good, because they so challenge the accepted dogma of other more acceptable books. Whatever the case may be, it’s as worthwhile to know what got left out of the Bible as what made it in. 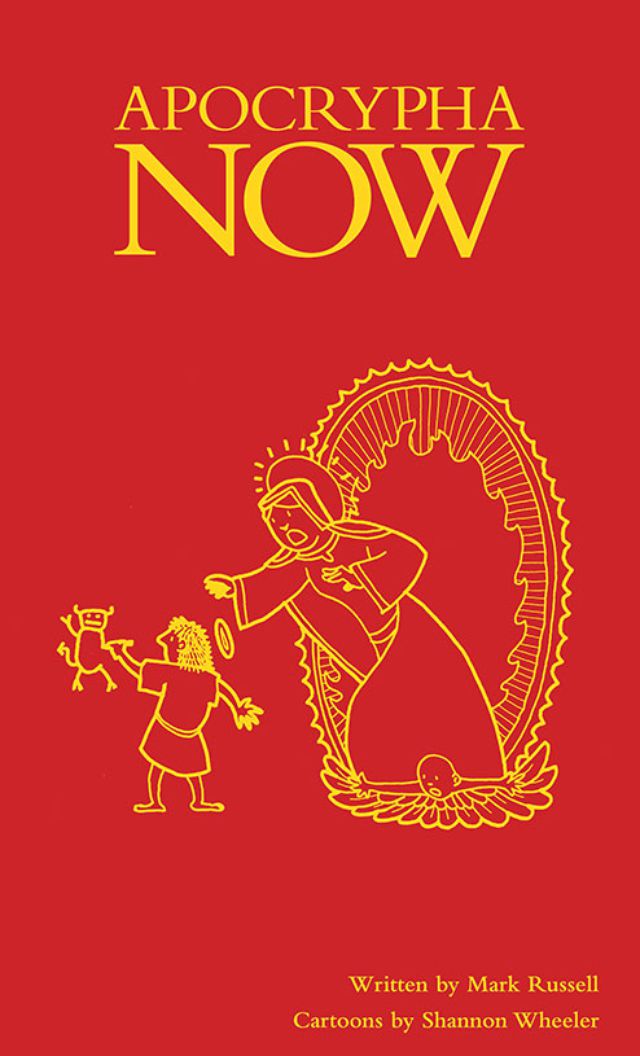 FS: What was the genesis for Apocrypha Now?

MR: In researching God Is Disappointed in You, our first book in which we condense the Bible, I came across all these apocryphal, non-canonical stories about Adam’s first wife Lilith. I also encountered the Gospel According to Judas, and stories that tweaked or expanded upon the stories of the Bible, and I felt like I had discovered a whole new wing to the house I’d never really knew existed. The stories were easily worthy of a second book.

FS: How has your background influenced how you approached writing Apocrypha Now?

MR: I was raised in a very narrow interpretation of the Bible. That not only were the 66 canonical books of The Holy Bible the inerrant word of God, but that any other voice on the matter was tantamount to heresy. But in researching the Bible, this clearly turned out to be garbage. Not only are there just-as-important writings that aren’t included in the canon, it’s clear from the Bible that figures like Jesus and Isaiah were familiar with these texts. There’s a moment in the Gospel According to Matthew where Jesus casts a demon out of a guy and then drops the mic, saying, “One greater than Solomon is here!” Which only makes sense if you know the apocryphal Testament of Solomon, which is about King Solomon capturing demons and using them as undocumented labor to build the Temple. Isaiah refers to Lucifer’s rebellion against God, which isn’t included in the Book of Genesis at all, but rather comes to us from the Jewish Midrash. So if these stories were good enough for the people in the Bible, why aren’t they good enough for people reading the Bible? 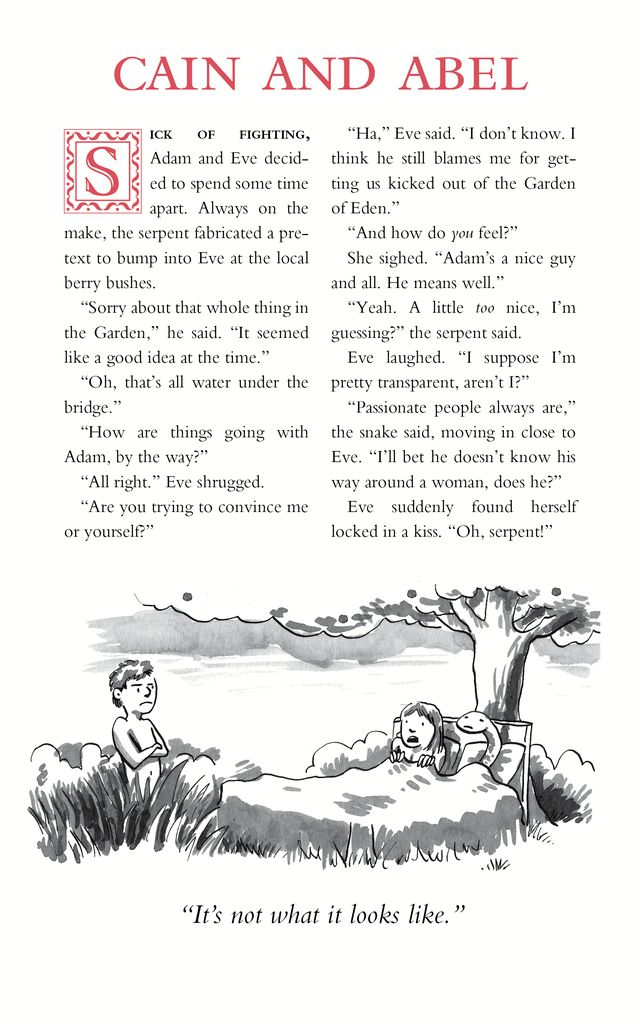 FS: I know you and Shannon Wheeler worked on God Is Disappointed in You. How did you two decide on what you wanted the visual feel of Apocrypha Now to be?

MR: The stories in Apocrypha Now tend to be wilder and juicier than the ones in God Is Disappointed in You, so we wanted the presentation to reflect that, not only in the story-telling, but in the artwork as well. So Shannon adapted several of the shorter books into mini-comics, and the single panel cartoons are often earthier and bawdier than what you would find in God Is Disappointed in You.

FS: I have a degree in religion and I’m a huge religion and comic nerd, so this book was right up my alley and made my heart sing. What is it about the Bible and religion that is so compelling for you that makes you keep revisiting it in your work?

MR: The Bible was a big part of my life growing up. It was always taught to me as a single divinely inspired message and the final word on everything from science to history. This was clearly false. It’s a book written by people who didn’t even know about pants. So I kind of lost interest in the Bible early on in life, but became fascinated in it again when I discovered what the Bible really was, which was dozens of different authors all struggling to figure out what God wanted from them. To me, this is far more profound than thinking of the Bible as a sort of car owner’s guide that’s put out by the manufacturer. My love of the Bible was born-again, you might say. 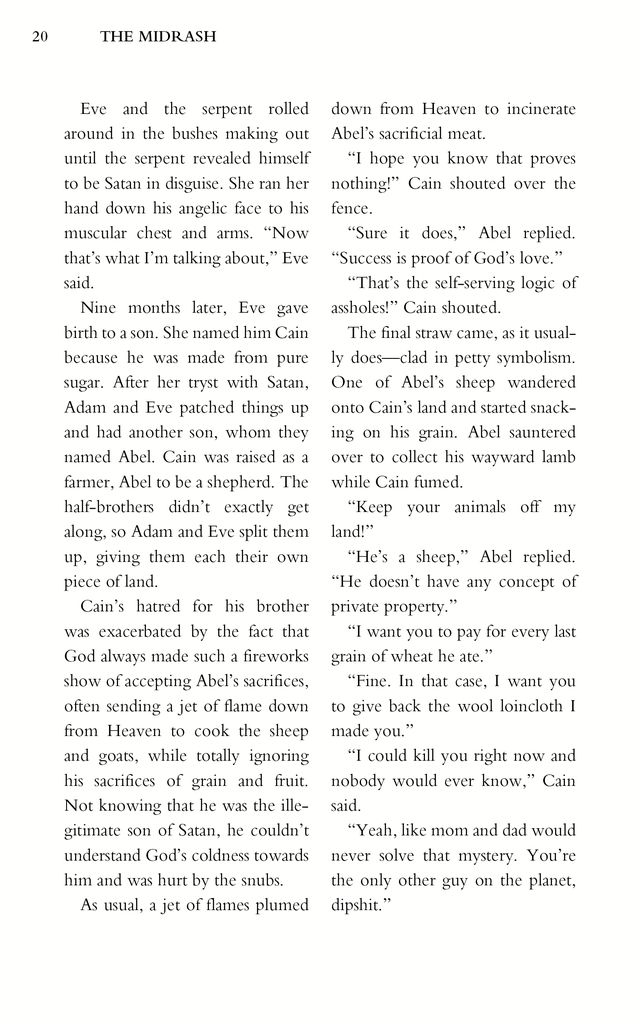 FS: Did the process for creating Apocrypha Now differ from God Is Disappointed in You, having tackled religion before?

MR: Yes. For one thing, Apocrypha Now tends to be a lot more story-oriented and have a lot fewer homeless guys in the desert screaming at Assyrians, so I focused a lot more on storytelling and plot and less on trying to figure out the theology and underlying messages of prophets and poets and doomsayers. Also, the writing is different in that people already know a lot of the stories in the Bible, so I could riff on that knowledge more in God Is Disappointed in You than I could in Apocrypha Now. I could say that Adam and Eve turned out to be pretty rotten pets and people instantly knew what I was referring to. In Apocrypha Now, I had to spell things out a little more.

FS: I understand that you worked with James Urbaniak—Dr. Venture himself—for the God Is Disappointed In You audiobook. What was it like to collaborate with him?

MR: I didn’t collaborate a lot with him directly. He e-mailed me a few questions, making sure that he was getting the sense of certain scenes right, but other than that, he pretty much just banged it out. Though I did get to hang out with him in San Diego and that was a lot of fun. Biased though I might be, I still say God Is Disappointed in You is one of the all-time great audiobooks, and we have James Urbaniak to thank for that. Lovely man. 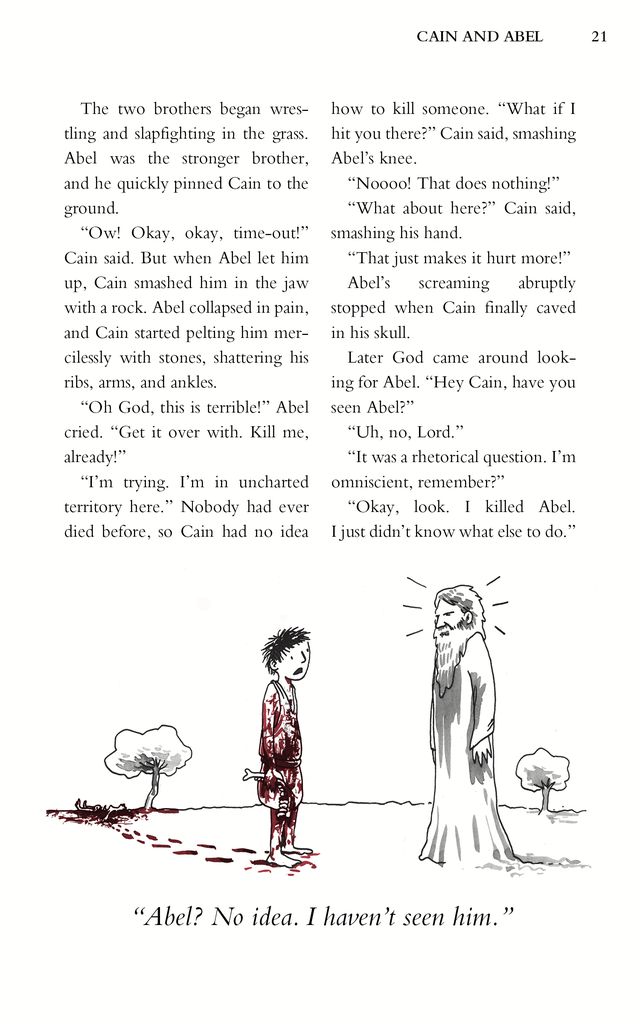 FS: Do you have any pieces of religious-themed pop culture that influences your narrative sensibilities?

MR: Well, obviously one big influence is Monty Python’s Life of Brian. What’s truly ingenious about their approach to the gospels is that they stop long enough to ask themselves questions like, “How would you explain suddenly having all these followers to your mom?”

FS: Do you have any plans to tackle sacred tomes from other religions? There are a wealth of texts to choose from!

MR: No. If we did a third book, it would probably be about all the Jewish and Christian writings that have sprung up in the last two thousand years since the Bible. Things like the Book of Mormon, the sermons of Cotton Mather, the Kabbalah, etc. 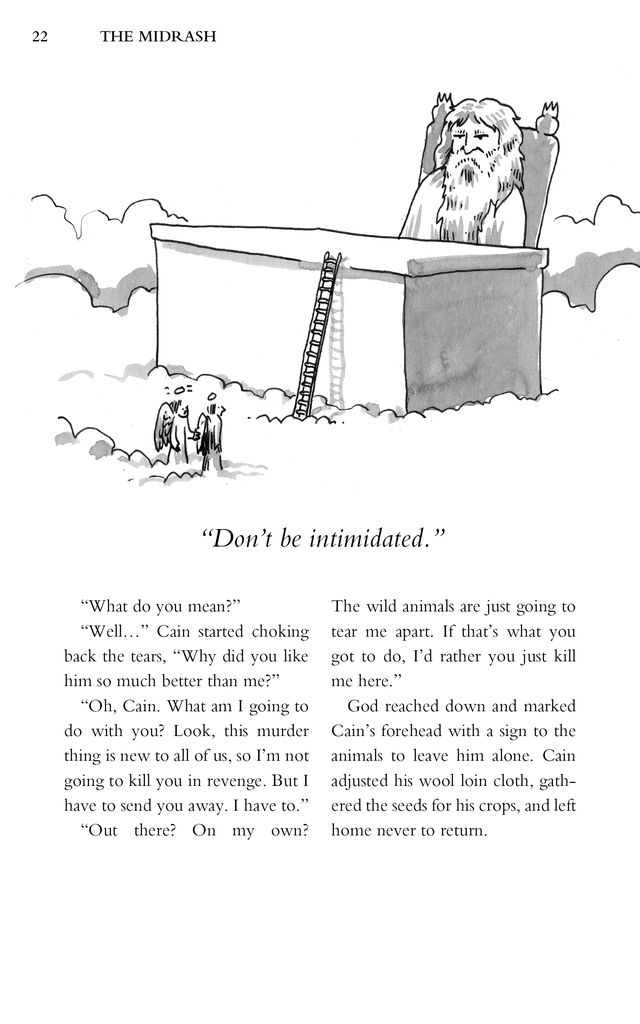 FS: What kind of takeaway do you want readers to have after finishing the book?

MR: The importance of seeing the Bible, not as a single book, but as a movement. A massive collection of thoughts and hopes and folktales that make us think, not only about why such stories were important to the ancient people who came up with them, but why they still matter to us today. In the end, we need stories, religious or not, to fill the holes in our lives. That never really changes. That’s our real religion.

Apocrypha Now, written by Mark Russell with Shannon Wheeler on art, is on sale May 31st from Top Shelf Productions.

Mark Russell & Shannon Wheeler’s faithful-yet-irreverent approach to the Bible made their book GOD IS DISAPPOINTED IN YOU a modern cult classic. Now, by popular demand, they turn their attention to the best parts left out of the canonical Bible, including the Midrash, the Apocrypha, Gnostic Gospels, and more! And if you thought the BIBLE had some weird stuff in it…