There is a desire in many of us to want to be something more, to rise above our present station in life. This yearning transcends geography and culture and time period–so it’d make sense that it would also persist in a post-apocalyptic landscape. Young teens Gogi and Zedo have similar longings in Giants #1, debuting next month from Dark Horse Comics. In Giants, the creative team of brothers Miguel and Carlos Valderrama explore a world in which the coming of kaiju-like creatures have forced humanity into hiding beneath the surface. What’s left of humankind has turned into tribalistic to an extreme degree, forcing kids like Zedo and Gogi to scramble and do what they can to survive.

The Valderramas spoke with me recently about the conceit of Giants, how the notion of giants isn’t relegated to just an outer life, and how their fears drove the creation of the series. 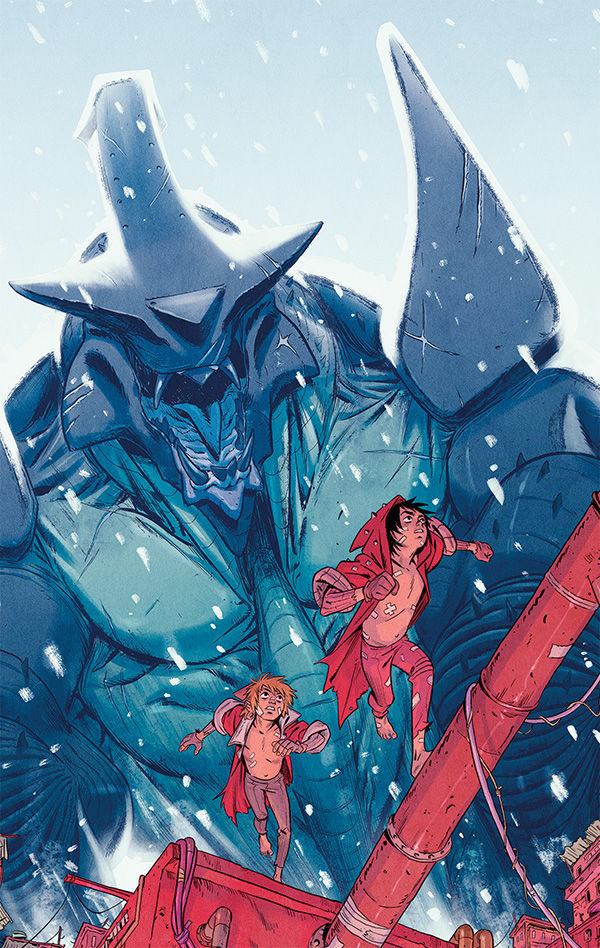 FreakSugar: Thanks so much for agreeing to the interview! Loved the first issue! For folks considering picking up the series, what is the conceit of Giants?

Miguel: Valderrama: Thanks! Glad you liked it!

Carlos Valderrama: Thanks for enjoying it! We wanted to tell this story for what seem like a long time now. It’s our first American project and we are giving it our all.

Giants introduces us into a world in which giant monsters reign supreme and the few remaining humans who hide underground have split into vicious gangs. 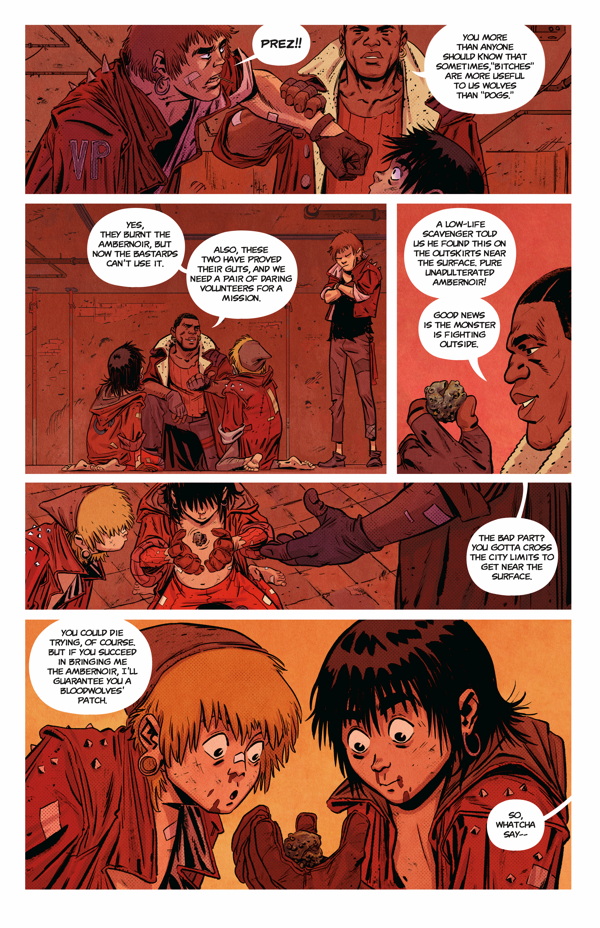 FS: Giants #1 has a wonderful vibe of Godzilla-meets-apocalypse-meets-The Warriors to it. What is the genesis behind the series?

CV: Believe it or not, our first idea of Giants was just in the middle of this Great Recession that scarred the whole world a few years ago. We thought that once it ended, young people would have to live by its consequences in a haphazardous landscape; however, it wouldn’t be hard or sad for them, but completely “normal”.

MV: You can have a pretty messed up world, but teens gotta be teens. What if there are monsters? They would still want to get more money to go out on weekends. 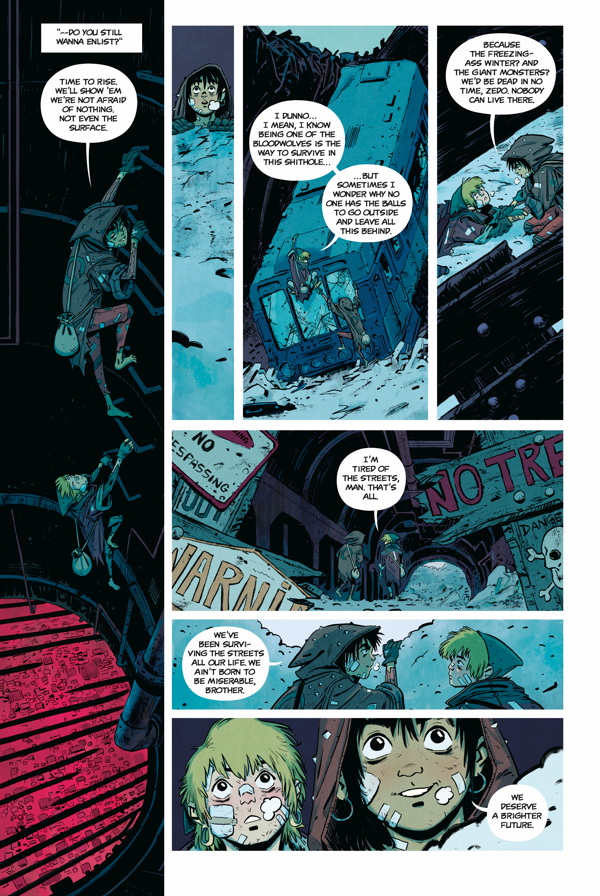 FS: There seems to be quite a few different genres that creep into Giants #1. Are there any particular works or influences that moved you while working on the series?

CV: Well, we indeed love monster flicks and books, and we dig the ones that use them as a means in a story, like Alien, Gojira and Jaws. But above all, we wanted young human characters to care about, so we thought about lots of teenage gangs’ stories that we love, like The Warriors —as you pointed out—, Attack the Block, City of God or Crows. 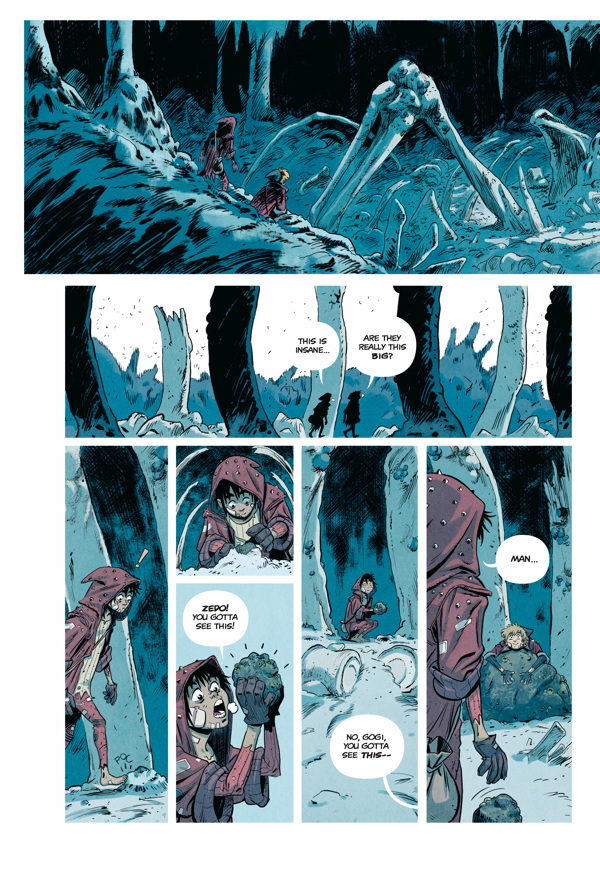 FS: With humans now living underground following the coming of the giants, how would you describe the state of the society they’ve managed to cobble together? Is it descending to a state of nature?

CV: Among the things I fear the most is probably tribalism. Therefore, we liked the idea that in a world hiding from the surface, young people controlled the society using their passion and violence, just like the monsters that live above them. 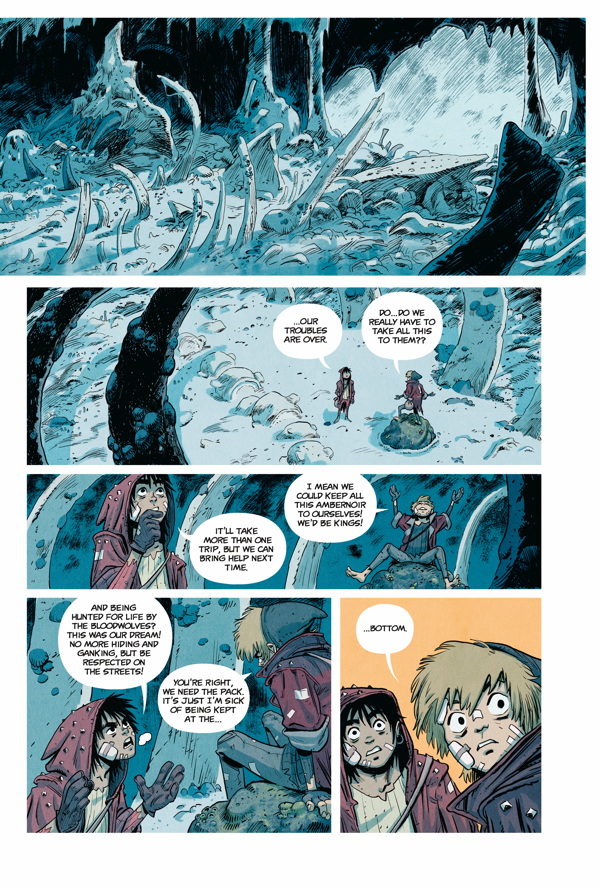 FS: The book mentions comet and the ascent of the kaiju-like monsters forcing the humans underground. Will you explore the nature and origins of the monsters and how they came to wreak havoc on the Earth?

CV: Our intention is to focus in our main characters while leaving some little clues about what happened. We’ve always dug how in lots of stories from the 80’s they propose and unfold a fantasy world without questioning it, so we preferred to have the mythology and world-building in the background. For now, at least. 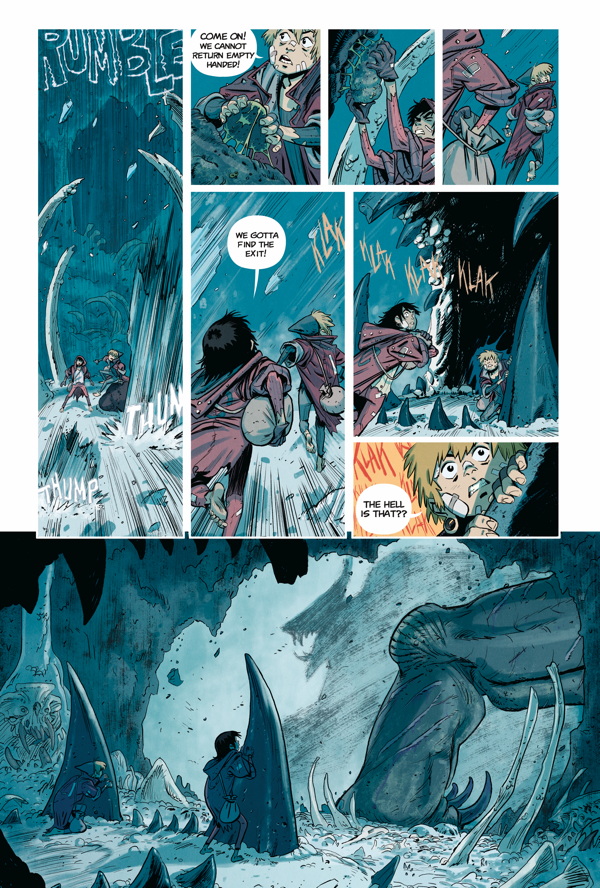 FS: The title of the series seems to have a double-meaning, referring both to the monsters and to our human protagonists who want to rise above their station in life. Will we be seeing more parallels to the inner and outer lives of the other humans and the monsters?

CV: Of course. We could say the entire storyline and themes are built on that concept.

MV: Also, there are little nods in the characters’ design that are meant to remind you of the creatures. 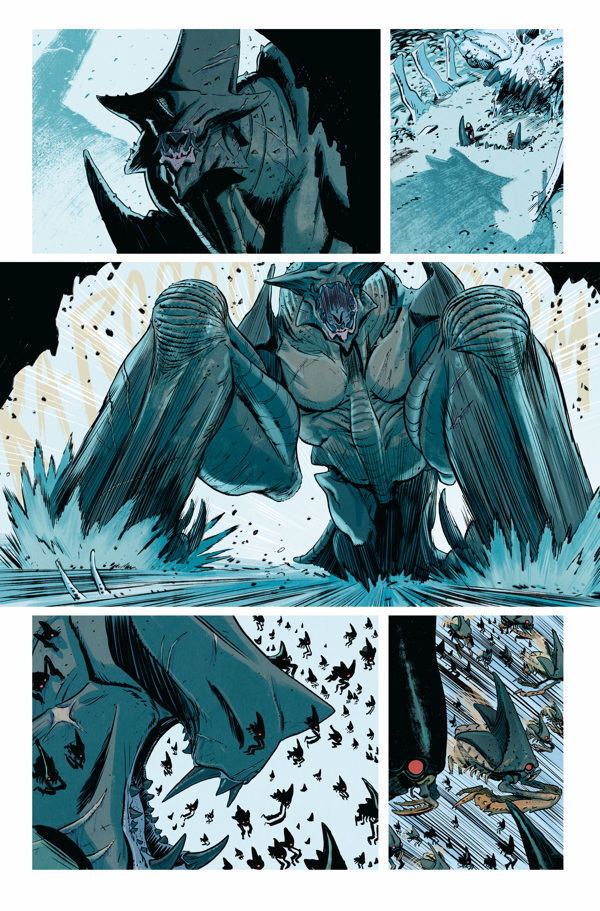 FS: Once the first issue’s protagonists Zedo and Gogi initially make it to the surface for a mission in the book, they’re surprised at the size of a monster’s skeleton. How long have humans been living underground? Is there anyone left who remembers life before the comet crashed into the Earth?

CV: We wanted the remaining humans to almost forget why they were hiding in the first place. The generations that live now in that world only care about the things they experience firsthand: the freezing cold near the surface and the stomping and roaring of the monsters. If there’s someone underground who knows what really happened, well, our characters didn’t want to listen to those “old man ramblings”.

FS: The look of the book is a nice alchemy of grit and occasional playfulness. How did you decide how you wanted Giants to look like?

CV: If there’s a common element in the stories and artists that have won our hearts, that is contrast.

MV: Especially in the first issue where we present these youngsters, I wanted to show their reckless and playful point of view before they confront the dirty reality. I’ve always liked the contrast between expressive and messy, and there are dozens of works I adore following this like Loisel’s Peter Pan, Alice’s Siegfried, Arcudi and Harren’s Rumble, Miller and Romita’s The Man Without Fear or Matsumoto’s Tekkonkinkreet.

Also, we’ve always been great fans of Otomo’s Akira and that’s an obvious inspiration for us.

FS: Is there anything you can tease about what we can expect down the pike?

CV: This is only the beginning! We will learn more about the monsters and how close their connection to Zedo and Gogi’s goals is, as well as some new characters down the line that will change the perception of our leads.

MV: And all well-seasoned with a good dose of giant monster rampage!

A cataclysm of unknown origins unleashed a race of gigantic monsters whose presence has driven humanity underground.

There, two orphans discover that the most dangerous monster is ambition, which unchecked, will grow until it devours you!