“While Dark Souls II remains solidly devoted to the console systems in graphics and control, FromSoftware did an excellent job of porting it over to the PC in what’s the definitive version”

How do I describe Dark Souls II? More importantly how do I describe my time within this hauntingly beautiful and deadly world? Sure, I could go on and on about how I have been beaten to a pulp by towering bosses and devilish beasties. I suppose I could drum up some lengthy prose detailing sad and broken husks of humanity weeping away what little remains of their life. But that’s rather exhaustive and you’re only looking for one thing anyway — is the PC port of Dark Souls II any good. Short story — it is. FromSoftware mustered their talent and pieced together a solid port. Go forth and play because I highly recommend it. For those new to the series read on for exactly why you boot up your PC (or PS3 or Xbox 360).

What exactly is Dark Souls II? It is a pendulum. Swinging rhythmically, and with each arc, inching closer to your demise. It’s not the dying that’s scary, though, it’s the knowledge that it’s coming, fated to cut you short. However, this is a game also dedicated to overcoming that gnawing voice in your gut that whispers for you to give up. And how you choose to deal with it is largely up to you.

The story, as with the first Dark Souls and its spiritual predecessor Demon’s Souls, is layered underneath an impossibly thick coat of mysteries, half-truths, and ghostly scraps of text. You won’t get everything in the your first playthrough (or your 2nd, 3rd, 4th, etc.). Indeed, most of the plot elements must be stitched together through item descriptions, load screen tips, and talking to every NPC you meet — usually multiple times. In a way, the real journey is divining the story through friends, message boards, and word of mouth. These shared experiences are what makes up your story — meaning that you’ll regale your friends with your amazing encounters, close calls, embarrassing defeats, and ultimate victory. Figuring out the subtleties and mysteries within the Dark Souls community is almost half the fun.

The other half of the story is one embraced by the devs, FromSoftware — a simple message stating you will die. Over and over. And over. And over. I’d be remiss if I didn’t quote on the difficulty of Dark Souls II. While the game is certainly filled with peril and utterly dire boss encounters, it edges just south of completely unfair. Typically, you’ll get to a breaking point where frustration meets challenge. Here’s the twist — you won’t want to give in. Furthermore, From has loosened their grip just a bit hoping to draw in a broader audience. Certain concessions, like fast travel and reduced mobs, lend a boost to the first time visitor. On the flip, vets can forego the help and even use special items to increase the challenge.

The imposing realm of Drangleic is haunted by other withered souls searching desperately for meaning as well. As a Chosen Cursed, it seems it’s up to you to make your own way through this dreary kingdom. Basically what this means in game terms is that there’s a number of ne’er-do-well, boss-type creatures that need a good whoppin’. Though, it’ll be your sorry ass that gets the majority of the whipping stick. Fortunately, you don’t have to tackle everything by yourself. Multiplayer exists in a kind of fluctuating state whereby you can summon other players to assist you on your arduous trek for a time. It’s great for when you find yourself beating your head against a particular troublesome foe. The other side of that coin bears something a bit more sinister — invasion by Dark Phantoms, or players seeking less honorable motives. Dark Phantoms present the fairly deep PVP mechanics. Additionally, you can enter various covenants that mirror your preferred style whether it’s jolly co-op, PVP, or a little of both. 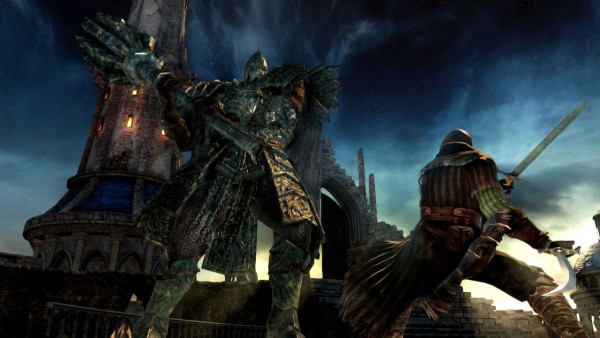 Getting down to brass tacks, FromSoftware had pretty much one mission regarding the PC port of Dark Souls II — don’t royally biff it like the first one. Lucky for us, the powers that be promised a great port and delivered squarely. The PC version looks and plays great, though you have to go in knowing that this is still a console game first. Keyboard and mouse control, though technically feasible, only adds an extra helping of suffering if it’s your only control method. Frustratingly, some of the expected benefits of Kb/M (i.e easier menu manipulation) are built around having a gamepad. It’s more aggravating than game breaking and proves the there is still some room for growth with this port. If you don’t have one, get a gamepad. In fact pick up two — just in case.

While Dark Souls II remains solidly devoted to the console systems in graphics and control, FromSoftware did an excellent job of porting over to the PC. Graphically squeaking past its console brethren, there are a few sliders and video settings but nothing that will totally blow your mind. However, the silky framerate and instant noodle load times greatly improve over the lesser versions. Lighting effects and textures on the PC are razor thin improvements but nothing like the disastrous Dark Souls build a couple of years ago.

This isn’t to say that Dark Souls II is left wanting. It’s a pretty good looking game. Still, I’m expecting the mod community will step in and bump up the shadows/light effects and maybe even try their hand at a remedying some of the muddier textures. Even now, the industrious modder, Durante, who essentially fixed the first Dark Souls has released GoDoSaTo which should allow for future updates to texture mods, robust configs for effects, and post-processing. Overall, it’s the culmination of a foreboding atmosphere and more than a few disturbing creatures lend a hard-edged fantasy flavor that is both wondrous and formidable. Art direction ultimately goes further than pure graphics. Sometimes, you’ll just want to stand at the cliff overlooking crashing waves and contemplate. The majority of my gripes are fairly minor and are not intended to drive you away. The PC version is the definitive one and if you’ve been patiently waiting for this port you will not be disappointed.

Mix in a lilting, melodic, and at times soul-shattering OST and you have one reason to crank up the sound. Eerie creaks, hushed whispers, weeping dirges, and primal roars can be heard all along the twisted paths through dungeon, forest, crypt, and castle. Even frightening fits of angry grunts become comforting to audiophiles. Dark Souls II is a treat for fans of ambient flutters as well as booming scale during boss fights.

I could probably go on and on about Dark Souls II and why I love this game. It’s more than the challenge or perceived impossibility — though I freely admit to jumping up and down and talking smack at the monitor after a particularly vexing boss. Unraveling the mystery of the world of Drangleic, as well as the larger universe of Dark Souls is deeply satisfying if you’re into the fiction. Sharing battle yarns with friends and even the ephemeral online encounter brings a certain warmth to the dreary game. The look, and more importantly, the heart of Dark Souls II is one mired in a feeling of dread while trekking about the desiccated viscera of a long dead legend. In a sense, you’re an archaeologist — albeit one with a sword — uncovering the strata of this sad, broken world and every hard-won victory brings you closer to the light.

Dark Souls II -- Dead And Loving It
While Dark Souls II remains solidly devoted to the console systems in graphics and control, FromSoftware did an excellent job of porting over to the PC. This port is the definitive version. The realm of Drangleic is one that'll haunt you for days as your struggle for more and bigger souls becomes an obsession.
9Overall Score
Reader Rating: (3 Votes)
9.3