Creator Shing Yin Khor’s graphic novel The American Dream?: A Journey on Route 66 Discovering Dinosaur Statues, Muffler Men, and the Perfect Breakfast Burrito explores Shing’s search for what America actually is as a place and an idea, and they look at how those things can be amorphous and ever-changing. In the story, that exploration takes the form of a road trip, as the title suggests, along Route 66. 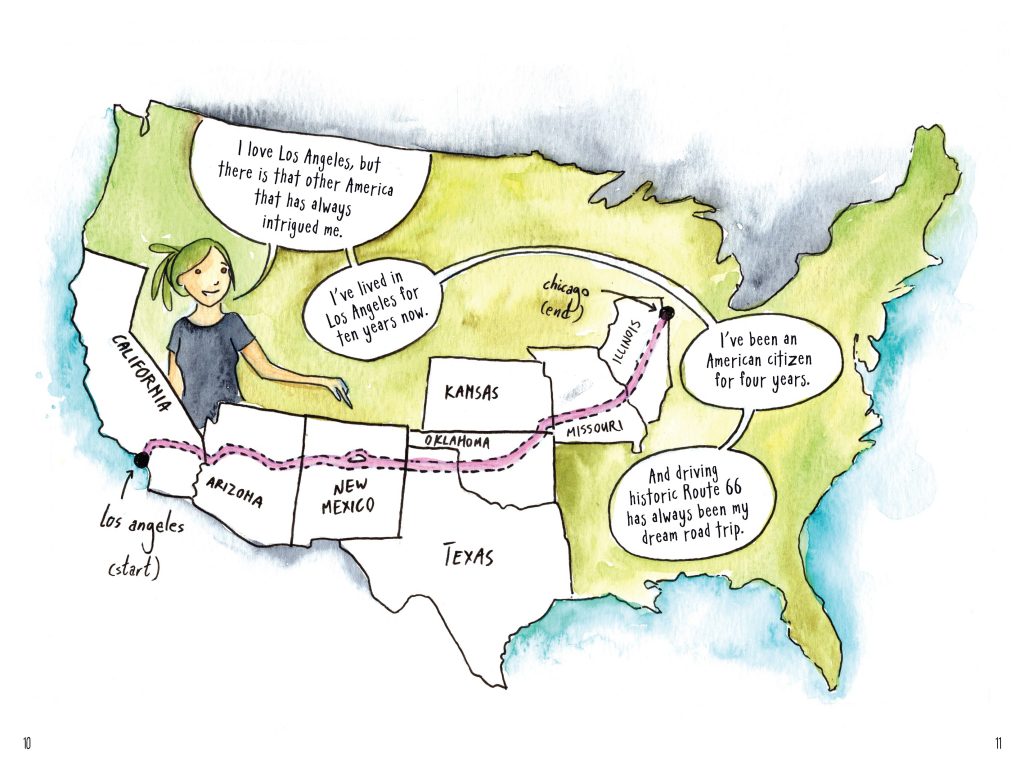 From The American Dream?: A Journey on Route 66 Discovering Dinosaur Statues, Muffler Men, and the Perfect Breakfast Burrito

However, you can’t exactly have a road trip without a road trip playlist, and we are proud to exclusively reveal the playlist that Shing put together to accompany The American Dream.

You can check out the full playlist on Spotify here. And here’s what to expect:

Dom Flemons, “Home on the Range”

As for why Shing included one of the songs on the playlist, they share their thoughts:

The playlist I put together is a mix of my personal tastes, although a lot of this playlist is about searching and getting lost, and being uncomfortable in new places. It’s also about going home, and American-ness and adventure, even if you’re not always great at it.

“Home on the Range,” by Don Flemons (from his excellent album Black Cowboys) was a very intentional inclusion—sung by a white singer (the “red man” verse is often dropped from modern interpretations), the song is kind of a chilling ode to settler-colonialism, in the vein of Laura Ingalls Wilder’s Little House on the Prairie books. When sung by Flemons, it feels like a reflection on the complicated, intertwined history of the West, that many people of color play a part of in (I am using “people of color” very intentionally because I am referring to lots of different groups, not just black people).

I actually finished a large chunk of this book in two weeks that I spent living on the first plot of American land homesteaded under the Homestead Act, as a National Park Service artist-in-residence at Homestead National Monument. It gave me a lot of time to research a lot of what my Route 66 drive stirred up. Since I spent some time working in the Visitor’s Center, I can hear the looping audio of homesteader history narration in my head—specifically the repetition that even as the Homestead Act opened up opportunities for single women and immigrants and people of color—”This land was not uninhabited.” It’s not a great history, but it is a history that exists, and we ought to know it.

A thread that I started pulling on during my Route 66 drive and have been researching more over the last couple years is the undeniable presence and community of people of color in the American West, and it is not always a narrative of suffering, or doing jobs that no one else wanted. American Indian foremen were prized in logging camps for their ability to communicate in multiple languages, and Chinese cooks were valued for being excellent cooks and managers. Many cowboys were Black and Mexican. Chinese miners excelled during the California Gold Rush even against the virulent anti-Chinese racism of the day, because they essentially formed worker cooperatives. Chinese merchants were able to gain a foothold in the American west because they let Black customers sustain lines of credit, which white businesses refused to do. It is a fascinating history, and so much white history doesn’t even acknowledge that people of color were there at all.

Clearly, Shing has put the same thoughtfulness into this playlist as he did into the creation of The American Dream, with songs that run the gamut of not just the American experience and how it varies greatly for different groups and individuals, but also what it means to just live life at all, no matter where you are. This playlist will move and elevate your spirit, and you should look to The American Dream for a similar experience. 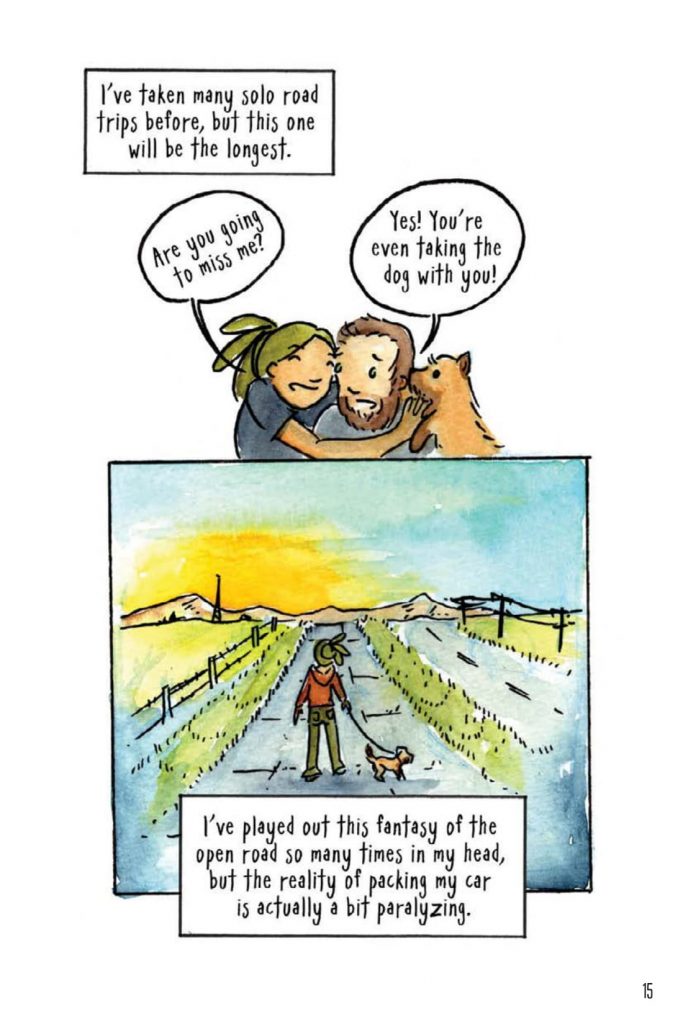 From The American Dream?: A Journey on Route 66 Discovering Dinosaur Statues, Muffler Men, and the Perfect Breakfast Burrito

The American Dream?: A Journey on Route 66 Discovering Dinosaur Statues, Muffler Men, and the Perfect Breakfast Burrito by Shing Yin Khor is on sale now from Lerner Books. And be sure to check out Shing’s Spotify playlist for the book!

Route 66 covers a total of almost 2,500 miles, famously winding from Chicago to LA. Established in 1926, it’s been called the Main Street of America, was dedicated to Will Rogers and is an essential part of Americana. Even those who’ve never traveled its roads know it from pop music, the 1960’s TV show Route 66, the Cars franchise, and John Steinbeck’s novel The Grapes of Wrath.

As a child growing up in Malaysia, Shing Yin Khor had two very different ideas of what “America” meant. The first looked a lot like Hollywood, full of beautiful people, sunlight, and freeways. The second looked much more like The Grapes of Wrath—a nightmare landscape filled with impoverished people, broken-down cars, barren landscapes, and broken dreams. Those contrasting ideas have stuck with Khor ever since and help explain their fascination with Route 66. In the spring of 2016, 10 years after moving to LA and 4 years after becoming an American citizen, Khor embarked on a road trip along Highway 66 in a 2010 Honda Fit, accompanied only by their trusty road-trip adventure dog Bug. On sale from Zest Books on August 6, 2019, Khor’s graphic memoir The American Dream?: A Journey on Route 66 Discovering Dinosaur Statues, Muffler Men, and the Perfect Breakfast Burrito allows readers to ride shotgun for a deeply personal and playful pilgrimage of roadside attractions, abandoned towns, diners, and motels. Like the very best road trips, the book relishes in unusual sites and roadside kitsch, with detours providing arcane trivia and profound observations alike. We visit Oatman, AZ, a former gold-mining town where several Hollywood films were shot. We stop at Two Guns, AZ, the abandoned site of the former tourist trap known as The Apache Death Cave. We take in plenty of iconic landmarks, from Holbrook, AZ’s dinosaur statues to Oklahoma’s Blue Whale of Catoosa.

Shing Yin Khor’s trip preceded the 2016 Presidential Election by a few months. And as Khor writes, “This comic feels like a record of a time when a brown girl could drive America fearlessly.” It is both the document of one cartoonist’s trip on the open road and a portrait of a constantly evolving America. Khor’s journey echoes the Joad family’s desperate pursuit of a better life out West, and the book takes stock of both the myth and the reality of the American Dream. We invite you to join us on the ride.