Friendship and forgiveness are inextricably linked. The fact of the matter is, no matter much we try to do otherwise, we’re going to screw up and do wrong by our friends. It’s usually not malicious, and it’s not something we set out to do. We’re humans and, unfortunately, humans are fallible. I’ve slighted and been slighted by my friends, people I hold up to be as close as siblings and consider family. Those hurt feelings are often caused by misunderstandings or differences in points of view or just giving into our ids and vices. If a friendship is worth having, though, we have to be willing to forgive and be forgiven and recognize that our fallibilities are not as important as the bonds we create with our friends.

However, the question is how far that understanding extends. How willing are we to look over the transgressions of our friends, no matter how egregious they might be? Is there a slight so foul that a friendship is irrevocably damaged? That’s the question that writer Garth Ennis explores in the penultimate chapter in his DC Comics/Vertigo series Preacher with the story “Alamo.”

I’ve talked about Ennis’ brilliant series about faith and gender roles and friendship at length here at FreakSugar, but that’s because there is so much to unpack from the stories he’s crafted. For the uninitiated, Preacher tells the tale of the Reverend Jesse Custer, who has discovered that God Almighty has left the throne of Heaven to wander the Earth. Armed with a power to bend others to his will with just his words, Jesse travels the globe with his girlfriend Tulip and his best friend, an Irish vampire named Cassidy, to make the great I AM accountable for his crimes against humanity. While the primary focus of the series is the trio’s quest, a good portion of the book turns the magnifying glass on the burgeoning friendship between Jesse and Cassidy.

Jesse grew up pretty rough in the small town of Anneville, Texas. Under the controlling thumb of his grandmother, who had his father killed in front of him as a child and had his mother wrested from his world, little Jesse didn’t have many people in the way of friends, save his inbred-but-sweet pal Billy-Bob. When the good Reverend finally escaped his bitch-dog of a grandma’s clutches and met Cassidy, he found a bond he’d been missing for years, latching on to the vampire and instantly connecting with him. During their time together looking for the Lord, the two newfound comrades shared many drinks together and had each others’ backs from those who would try to trip them up along the way. Their mutual respect and admiration for one another created a friendship that seemed unbreakable.

That is, until it all turned to shit.

During a time when Jesse was thought dead, Cassidy, who harbored a crush on Tulip, made his move on her with his friend out of the picture. Taking advantage of Tulip’s despair from losing Jesse, Cassidy moves in on the grieving girlfriend, leaving pills and alcohol around to ensure that her judgment will be compromised. Tulip eventually becomes sober enough to realize that Cassidy is a piece of shit and makes her way to New York to her friend Amy. Jesse reconnects with Tulip, who tells him about what Cassidy has done. Bothered by the notion that he could have misjudged Cass’ character so epically, Jesse does some investigating into his former friend’s past, learning that the vampire has a history of getting women addicted to drugs for his own personal gain.

Feeling betrayed both by what Cassidy has done to Tulip and women in the past, Jesse arranges for Cassidy to meet him at the Alamo for one last confrontation, a fight and a final goodbye. Despite Cassidy’s vampire strength, Jesse beats the shit out of Cassidy, finally losing his temper and showing the depth of his pain at Cassidy’s betrayal.

Why the fuck did you let me down so bad!!!

Jesse’s words are very revealing. True, he’s furious at how Cass treated Tulip, but his anger also erupts from how deeply the first friend he had in years could so utterly fail him. Most of Jesse’s family had subjugated him or had been murdered, and Cassidy was the closest thing he had ever had to a brother as an adult. While Jesse still had Tulip, Cass’ actions clearly broke Jesse’s heart.

But this is where Preacher reflects on the nature of forgiveness, redemption, and repairing friendships long thought destroyed. During the midst of their fight, a spent Cassidy asks Jesse for help, acknowledging that he’s made a mess of his life.

You always used to go on about this country givin’ people a second chance—Well, where’s mine?

Do I get a second chance, Jesse?

Can yeh reach out a hand to a friend?

Jesse’s face suggests that Cassidy’s words ring true, but he can’t bear to reach out to him. Finally, Cassidy cuts to the core.

It’s not so easy to stand by yer friends when they’re stuck on the road to Hell, is it? 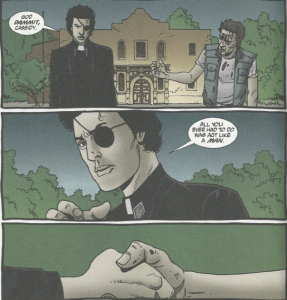 And that’s when Jesse realizes that we all, in our own way, damn ourselves to some extent or another, but the only way to keep going and power through life is to have the capacity to forgive one another. We are all broken in our way, but we can’t let our pride and shame from keeping connections and bonds that our truly worthwhile. As much as Preacher teaches us how to treat one another on the macro level, it also has so much to say on the micro level and our personal interactions. If we can’t forgive each other and ourselves, we can’t begin to help repair and help the world at large.

Thanks for stopping by for another Flashback Friday. If you haven’t spoken to a friend in years because of some sort of argument or slight, consider giving that friend a call. Forgiveness is not just about the other person, after all.