Since the character’s first appearance nearly 18 years ago, the Shaolin Cowboy, an excommunicated monk wandering a sort-of-America, has found himself, time and again, in the thick of fantastical, action-packed, and often bloody adventures. Guided by the hand of creator Geof Darrow (Hard Boiled, The Big Guy and Rusty the Boy Robot, the Matrix films), the loner often finds himself in the company of others, both friend and foe.

In Darrow’s latest Shaolin Cowboy yarn, Cruel to Be Kin, which just debuted last week, the former monk finds himself traversing obstacles a’plenty while protecting a young Komodo dragon. While he admits that he’s influenced by comics and westerns and samurai films he enjoys—just like any artist or writer—Darrow’s work continues to be unrepeatable, something we’ve never seen the likes of before nor will never see afterward.

I spoke to Mr. Darrow recently about Shaolin Cowboy: Cruel to Be Kin, the inspiration behind the comic, how the past six years have influenced his work, and how his detailed backgrounds are another character in his stories. 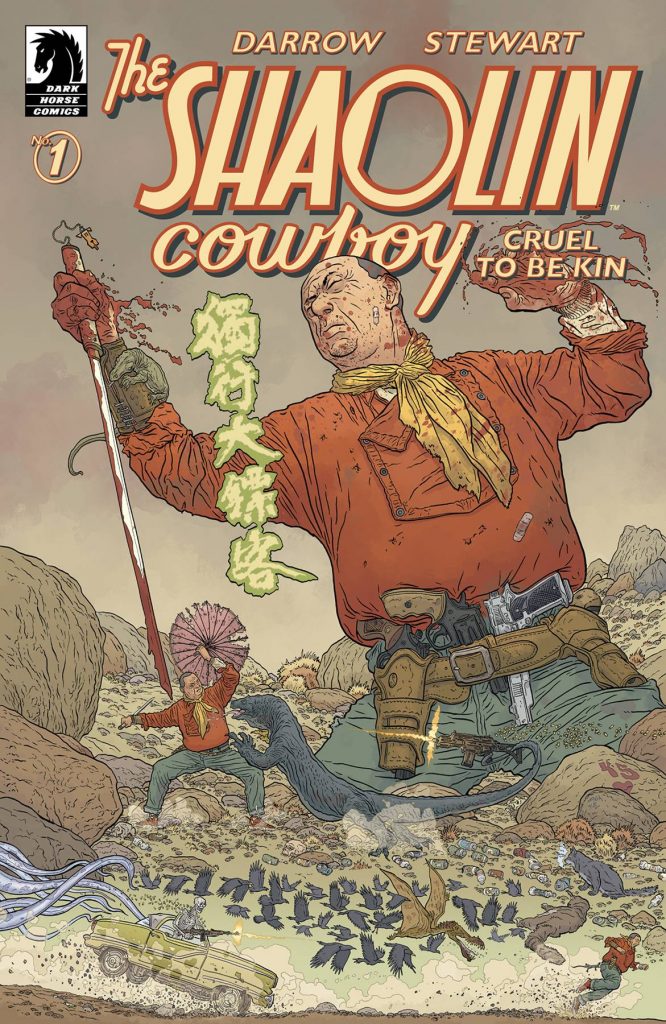 FreakSugar: For folks who might not be familiar with the concept of the Shaolin Cowboy, how would you describe the character and the themes of the book?

Geof Darrow: It’s a lot of the stuff that I like. It’s kind of a western without being a western. It’s a lot of martial arts. It’s an ex-monk who’s seen too many cowboy movies. [laughs] He was thrown out of a monastery and he wanders around kind-of-America. It’s not exactly America, but it’s kind of America. Things happen to him and he tries to solve everything with weapons or his hands and that doesn’t always work out.

It’s action-packed. He doesn’t have ten rings of power, I will say that. [laughs] He doesn’t need them.

FS: He tends to always try to solve problems with violence. It’s engaging to look at, but when you’re dealing with that level of violence in the stories, is there anything you’re speaking to?

GD: I think about it sometimes when I’m working. I think, “Why am I drawing this stuff? There’s enough going on in the real world. Why am I drawing it?” I find it very cartoony what I do with the violence. There’s too much violence in the world. Not enough understanding. There’s also lack of tolerance; lack of understanding and tolerance is what he’s up against. If people just left him alone, nothing would happen.

He can be petty, too, I think. He has a bit of an ego. I don’t know if anyone has ever picked up on that. He’s kind of full of himself when he could walk away sometimes. 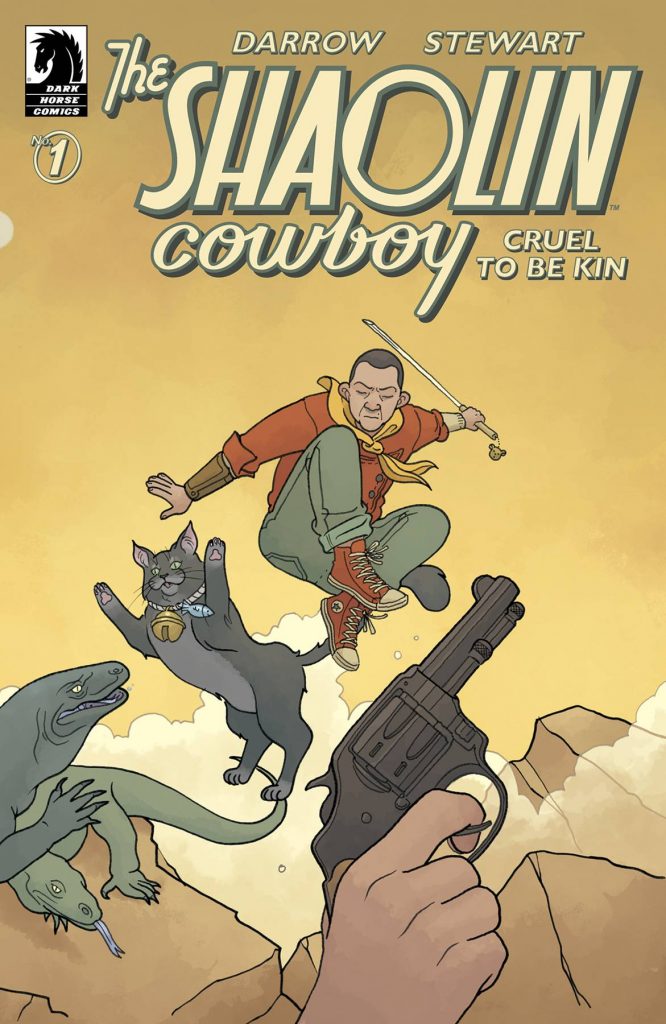 FS: The comics medium is sometimes an easier way to suss through those feelings.

GD: I think a lot of the things I don’t like manifest themselves in the comics sometimes. I was bullied when I was younger. I think that drawing comics is sometimes a way of getting back at the people who bullied me or were mean to me. Especially in high school, I was a big kid, 6’2”, 6’3”. I wasn’t interested in sports at all, which really bugged some of the kids in school. They wanted to play sports and they couldn’t understand why I didn’t. “You’ve got the height and you’re sitting at home doing, of all things, reading comic books.”

FS: It probably bugged some of the coaches, too, because I’ve seen coaches try to recruit.

GD: I did try some sports, but I wasn’t all that interested because I wasn’t very good at it. I wanted to try it so I wrestled. I won a lot because there wasn’t anyone my size.

I remember one time I wrestled. The guy smelled so bad. [laughs] I gave up and let him pin me. The coach was like, “Darrow, that was awfully fast.” I said, “I’m sorry, I just couldn’t go on. He smelled too bad.” [laughs] He laughed, but said I’d pay for it at practice tomorrow.

FS: What can you tell us about Cruel to Be Kin?

GD: It’s a thing about family and choice. It’s that old saying, “You can’t pick your family, but you can pick your friends.” I always believed that. The family in this case is a Komodo dragon under his wing. I was watching a special on TV about Komodo dragons. The mother has to keep an eye on the eggs because the father will eat them as soon as they’re born. Offspring to a male is competition for resources on the island. I thought, “That’s interesting.”

And I always loved Lone Wolf and Cub, about protection, so I thought I’d do that. It’s him protecting a Komodo dragon, but it goes off in another direction. It also has to do with tolerance. I don’t want to give it away. He runs into some white supremacists. It gets pretty ugly at the end. But still, there’s monsters and humans who are monstrous. 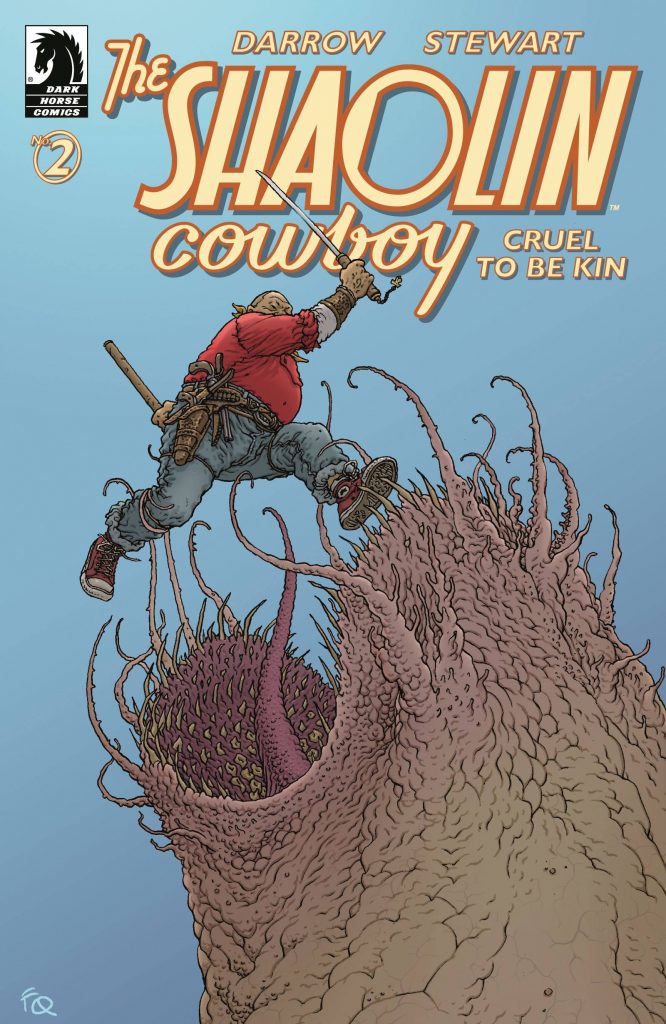 FS: It’s been an exhausting six years. You talk about subverting expectations and we’ve had a pandemic. I can’t imagine that none of that goes into your work.

GD: It does make an impact. Bullies have always bothered me. There’s a lot of bullies in America. Here in France, there are a lot of bullies, too. It manifests itself in different ways. Like you said, the last six years, there’s been such a lack of understanding and hate. It’s like, everything has to be burned to the ground. There can’t be any common ground between people. The last six years it’s been okay to be mean to other people that aren’t like you, that are different.

In America, there’s this dream of America that only existed for certain people. You see this in France as well. There’s a lot of racism here, too. You saw that in the last election. There weren’t a lot of choices. You had this moderate conservative guy who hasn’t done much for the people. He’s not like Trump, but he got tax breaks for people who didn’t need them. But he was up against this horrible candidate who’s into Nazi stuff.

FS: One thing that struck me—and maybe I’m just tender-hearted right now—is that the fact the Shaolin Cowboy is protecting a Komodo dragon. We need stories like that, of protecting people and animals and things and not burning everything to the ground.

GD: I’ve never understood why people have to be so hateful of people who are a certain sexuality or color or gender. Why does it bother people so much? I don’t get. Live and let live.

Even in comics, I see these guys, certain groups who are tearing stuff down. They’re threatened, I guess? 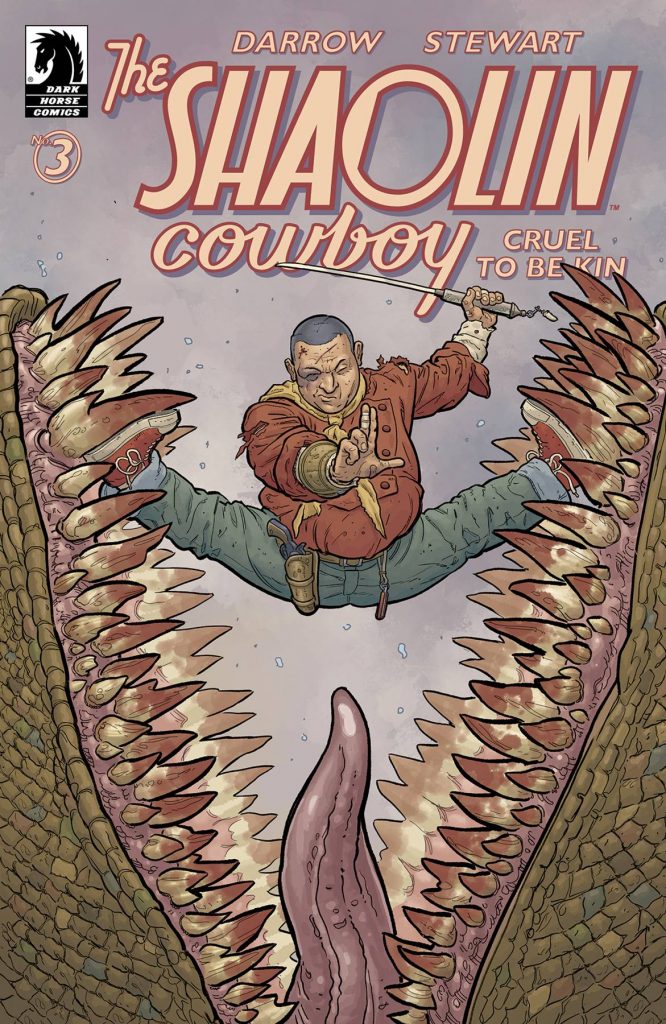 FS: It’s circling back to an America that never existed or only existed for a few people.

GD: I don’t know what the way out is anymore. I used to think things were getting better. But then I realized that in the last six years that we’re not making much progress.

FS: At times, at least in comics, it seems more prevalent, at least on Comics Twitter. I won’t give them any more press by saying their names. It’s exhausting and I don’t get it.

I was telling someone the other day that characters like Superman and Spider-Man and Batman—I love those characters, but I’ve seen myself as a white cishet male represented for the last 80 years. Why would I not be okay with other represented in comics?

GD: There are always those people who say, “You’ve stolen my childhood.” It burns me up. Are you so fragile because Superman doesn’t have X-ray vision anymore? There’s always some movie thing where the lexicon is changed of Batman or Superman. “Oh, they messed up Batman.” There’s some really goofy Batman stuff.

GD: Yeah! Or Batman goes to Mars. I don’t know how they got there. 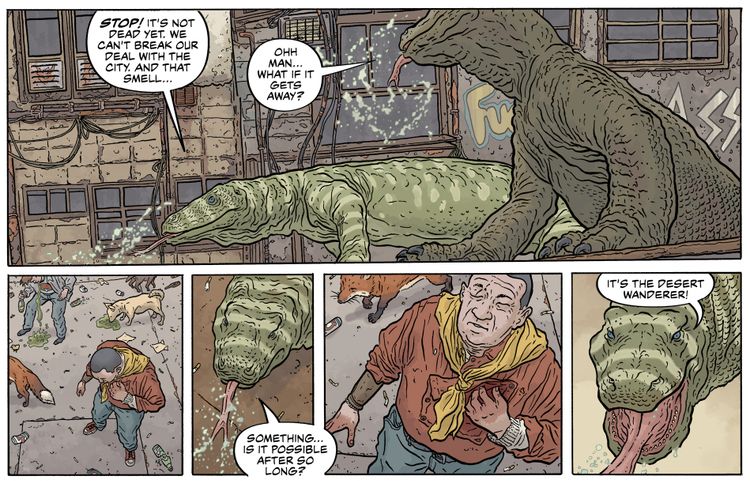 From SHAOLIN COWBOY: CRUEL TO BE KIN #1

FS: Have there been any other pop culture influences besides westerns and samurai stories that have crept into your work?

GD: Not really. I watch a lot of documentaries. That’ll give you ideas for stories.

FS: All of your stories are so packed with background details. How do decide what to include?

GD: I’ve always seen the background as another character, especially in this latest Shaolin, and the last one as well. Who’ll Stop the Reign? had a lot of that. The signs and stuff set the stage of what world he’s living in now. It’s not exactly America, but it’s an extrapolation of it, the bad things I’ve seen in there. The background creates depth. I’m interested in panels that have a foreground, middle ground, and background.

I’ve heard some artists say, “I can do backgrounds, but they bore me, so I don’t do them.” I’m like, “Wow.” You can tell a lot from a background. European artists have a different style. You don’t have many splash pages. You never have a main character flying through empty space. Moebius would have a city that has depth.

Shaolin Cowboy: Cruel to Be Kin #1 is on sale now from Dark Horse Comics.

In Phase 4 of the SCU, the Shaolin Cowboy finds his parenting skills being tested when he is forced to homeschool during a pandemic of unparalleled violence, in this story torn from yesterday’s viral twitter feeds.