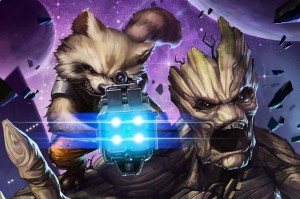 In FreakSugar’s final installment of “Know Your Guardians of the Galaxy” in preparation for the premiere of the feature film today, I throw the spotlight on the last two Guardians members who star in the movie: Groot and Rocket. Everyone loves adorable anthropomorphic badasses—myself included—and this duo has taken the Internet by storm since the release of the first Guardians of the Galaxy trailer. There’s even Groot/Rocket fanfiction on the web! Okay, I don’t know if that part is true, but it’s the Internet. You have to imagine that’s out there somewhere. Anyway, on with the show. 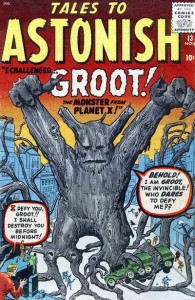 Groot, voiced by Vin Diesel in the film, was created in 1960 by Stan Lee, Jack Kirby, and Dick Ayers in what I can only assume was a raucous LSD-popping session. He first appeared in the Marvel Comics series Tales to Astonish, which routinely featured batshit-crazy monsters coming to Earth to terrorize the populace. Incidentally, the series also featured the first appearance of Ant-Man, because bugs, I guess. In his original appearance, Groot was a plant monster from space who came to Earth to gather humans for study. Termites proved to be his Achilles’ stump, however, and that was the end of Groot. Later on, the villain Xemnu (yep) recreated Groot to fight the Hulk, but Hulk smashed.

Later, through a bit of retroactive continuity, Groot’s entire origin was altered to seem a little less silly(?). Groot was reimagined as a Flora Colossus from Planet X, living with a race of other tree-like beings. “Maintenance Mammals,” which resemble squirrels, take care of tending to Planet X’s biome. (I take back the silly part.) The knowledge of the Flora Colossus was passed down to them via photosynthesis by the caretakers known as the Arbor Masters. (Really, I take back the silly part.) Groot’s particular genetic branch (ha!) had deep knowledge of quasi-dimensional super-positional engineering, whatever the Hell that is. He liked to hang with the squirrel folk moreso than his own Ents, er, Flora Colossuses. Groot was exiled for protecting the squirrels from others from his race and was exiled for his trouble. Probably cried “I am Groot” sadly in response. (Fun fact number dos: The reason it seems like Groot can only repeat “I am Groot” is due to the thick larynxes of the Flora folk make it sound like that’s what they’re saying. Very less satisfying explanation than what you wanted, I imagine.) 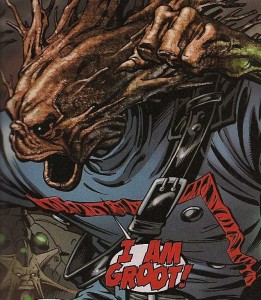 Groot hooked up with Star-Lord and his future teammates Gamora, Drax, and Rocket when the Phalanx, cybernetic alien organisms, attempted to take over the Kree Empire and the rest of the universe. It was revealed that Groot might be the last of his race (in what I can only imagine was the result of an unextinguished cigarette). During the melee, Groot befriended Rocket—maybe Rocket reminded Groot of his squirrel friends on Planet X? Groot has been destroyed twice in the service of his friends, the last time regenerating from a part of Groot Rocket nurtured back to health (aaawwww). As a member of the Guardians of the Galaxy, Groot has helped his friends stave off several threats, including most recently stopping the resurrected villain Thanos from stomping through the universe. I imagine he yelled during the skirmish, “I am Groot,” which translates to “Dear sir Thanos, I do say that my comrades-in-arms and I will continue to strive to halt your plans to do most grievous harm to our universe.”

And now for Rocket. Note: I love Rocket Raccoon. Like, a lot. Even before the Guardians of the Galaxy trailer, even before the character’s revival in the eponymous comic book Guardians. I first caught a glimpse of Rocket as a throwaway joke in an issue of The Incredible Hulk, where he appeared as a tapestry on an alien warlord’s wall. I immediately had to look up this peculiar critter. Rocket is the type of character that comics were made for, and his existence is a testament to all that the medium can do.

Rocket Raccoon, voiced by Bradley Cooper in the film, was created by writer Bill Mantlo and artist Keith Giffen. Fans of The Beatles might recognize Rocket’s name as a nod to the group’s song “Rocky Raccoon.” As far as Rocket’s origin, strap in. 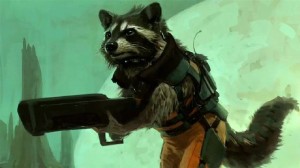 Whew, okay. I’m going to try to make this as sensible and as concise as I can, but just be warned. *Deep breath* Rocket hails from the planet Halfworld in the Keystone Quadrant, where he acts as the quadrant’s guardian, as the quadrant is sealed off from the rest of the universe. Wal Rus (guess) acts as Rocket’s first mate on Rocket’s ship, the Rack n Ruin. On Halfworld, the animal companions of the planet’s mentally inhabitants have been genetically modified mentally and physically to protect those inhabitants. The robots who had been in charge of serving the mentally ill on Halfworld had gained sentience when a nearby star went nova and tinkered with the animals’ genetics to do the robots’ work in their stead. 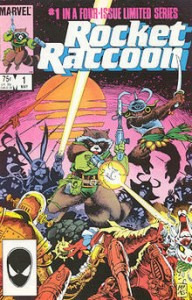 Two otters on Halfworld started a toy factory to create toys to keep the mentally ill on Halfworld happy. Once the otters slept with the fishes, Jackson Jakes, a mole, and the tortoise Uncle Pyko took over the factory, creating robot killer clowns and robot bats to steal the Gideon’s Bible, an indecipherable icon of Halfworld. (Seems like a lot of work. You can get a Gideon’s Bible at nearly any hotel and motel nationwide.)

I swear I’m not fucking with you with any of this.

Later, Rocket was somehow imprisoned by the alien Kree, which seems to be an ongoing theme. He was released to aid his future Guardians of the Galaxy in stopping the cybernetic aliens known as the Phalanx, forming a bond with Groot in a nice Han/Chewie or Cheech/Chong pairing for the ages. Rocket helped nurture Groot back from a spruce after Groot was destroyed. (Reunited and it feels so good!) After Star-Lord was feared dead after a battle with Thanos, Rocket and Groot returned to Halfworld to prevent the villainous Star-Thief (no relation to Star-Lord) from merging with Halfworld’s core. Once Star-Lord pulled a resurrection stunt, Rocket reunited with the Guardians of the Galaxy.

Guardians of the Galaxy premieres today! Finally! Quit reading this and go see it now!

Additional Important Note: Bill Mantlo, co-creator of Rocket, is in bad shape, following being hit by a car in 1992. He suffered brain damage and is currently under living in a healthcare facility. If you wish to donate to help with Mr. Mantlo’s ongoing healthcare, read this note from writer Greg Pak to find out how.