“There’s been some talk” of bringing back the fan favorite pathologist in the third season of the Bryan Fuller series.

The second season of Hannibal played an especially brutal game of “no one is safe.” As its title character’s secrets (and bodies) started to surface, how many fans remained on “Team Hannibal” – especially after the events of the episode, “Takiawase.” The fourth episode saw FBI profiler (and murder suspect) Will Graham (Hugh Dancy) working with pathologist Beverly Katz (Hettienne Park) in the hopes of finding some evidence that Hannibal was indeed the serial killer known as the Minnesota Shrike.

If you miss the sardonic wit of Dr. Katz, so does the actress who plays her. Ms. Park, who was kind enough to answer a few questions by e-mail on the eve of the second season home video release, discusses Bev’s departure from the show and how we might potentially see her character again.

FreakSugar: Were you aware of Beverly’s fate heading into the second season? How did Bryan Fuller drop that bomb on you?

Hettienne Park: It was more of a sizzle than a bomb. I was supposed to go in season 1, but while we were shooting, Bryan came to set and asked if I would stay for season 2 and they would kill off Katz then.

FreakSugar: Seriously, though – why Beverly? She was the best. More importantly, what do you think has been lost now that she’s no longer around?

Park: I know, right? I think the show has no soul without Bev Katz. Just kidding. Seriously, though – if Beverly Katz sucked, nobody would care and the show wouldn’t be as fun to watch. The stakes have been raised for the rest of the team having lost one of their own. I think what they lost is the Jewish Asian chick and some salty humor. But there are so many new characters who will more than make up for that.

FreakSugar: What initially attracted you to the character?

Park: I love Beverly Katz. I definitely found her competence, professionalism, integrity, and chutzpah extremely attractive. But really, I was so excited just to be a part of the series and to be working with and for Bryan Fuller.

FreakSugar: Why do you think Beverly decided to go it alone inside Hannibal’s lair?

Park: I think it was a combination of bravery and hubris. Perhaps her fatal flaw was her desire to resolve her faith in Will which caused her to ignore her better judgment. Getting anyone else involved would have been too risky for everyone especially in light of how much hot water Jack was in with the bureau already. 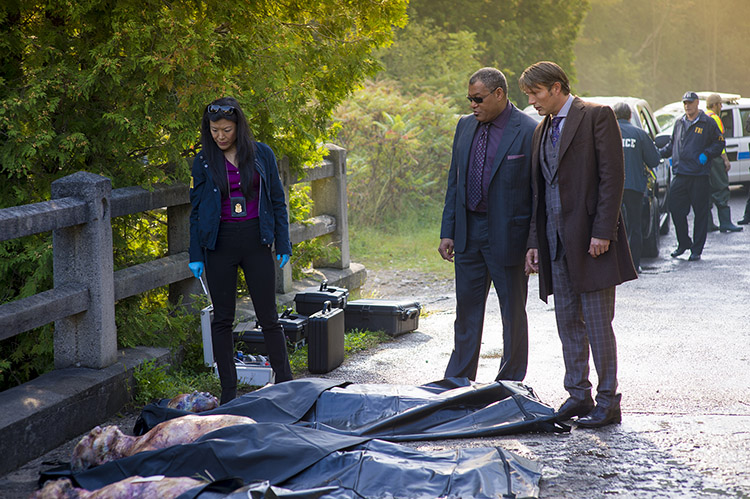 FreakSugar: This season has seen the women around Hannibal and Will – Beverly, Alana, Margot – pushed to the forefront. Do you feel like this was a deliberate move on Mr. Fuller’s part?

Park: I think everything Fuller does is deliberate, yes. Season one was all about establishing the relationship between Will and Hannibal. Season two had more room to involve other characters. It would only make sense to push the women to the forefront to balance out all that male energy.

FreakSugar: Dead isn’t always “dead” in this show – has there been any talk about seeing Dr. Katz in flashbacks?

Park: Yes, there’s been some talk. But so far, only talk. Though you never know. Anything is possible.

FreakSugar: What will you miss most about Beverly?

Park: Her fearlessness and her humor. She’s the kind of friend everyone should have in life. Dependable, reliable, loyal, and genuine. Oh, and her wardrobe. Her leather jackets, tight black pants, and high heels no woman would ever wear on the job.