Writer Scott Snyder is maybe best known for his long stretch on DC Comics’ Batman New 52 relaunch and the following All-Star Batman title. While those books had their own moments of grandeur and superhero splendor, the level of bombast he brought was just the tip of the iceberg of what he could do, if given DC’s entire character toybox to play with. As seen in the company’s Dark Nights: Metal event, Snyder is not afraid to swing for the fences and go all-in, mixing Big Ideas with even bigger action.

As such, it makes sense that what he set up in Metal was just a tease of things to come, as seen in this week’s Justice League: No Justice #1, the first of a weekly four-issue miniseries written by Snyder, James Tynion IV, and Joshua Williamson, with Francis Manapul on art, colors by Hi-Fi, and letters by AndWorld Design. Following the breaking of the Source Wall during the events of Metal, four Cosmic Brothers—the Omega Titans, representing Entropy, Wisdom, Wonder, and Mystery—have been unleashed, and perennial Superman villain Brainiac has recruited—kidnapped, really—many of the Justice League’s members and other of Earth’s heroes to stop them from destroying worlds across the cosmos. Showing the heroes that their predictability in their combat has stymied their potential, he partners the characters into four teams to optimally defeat the brothers. Adding a sticky wicket to the mix, Brainiac has also enscripted some of Earth’s villains to join those teams. 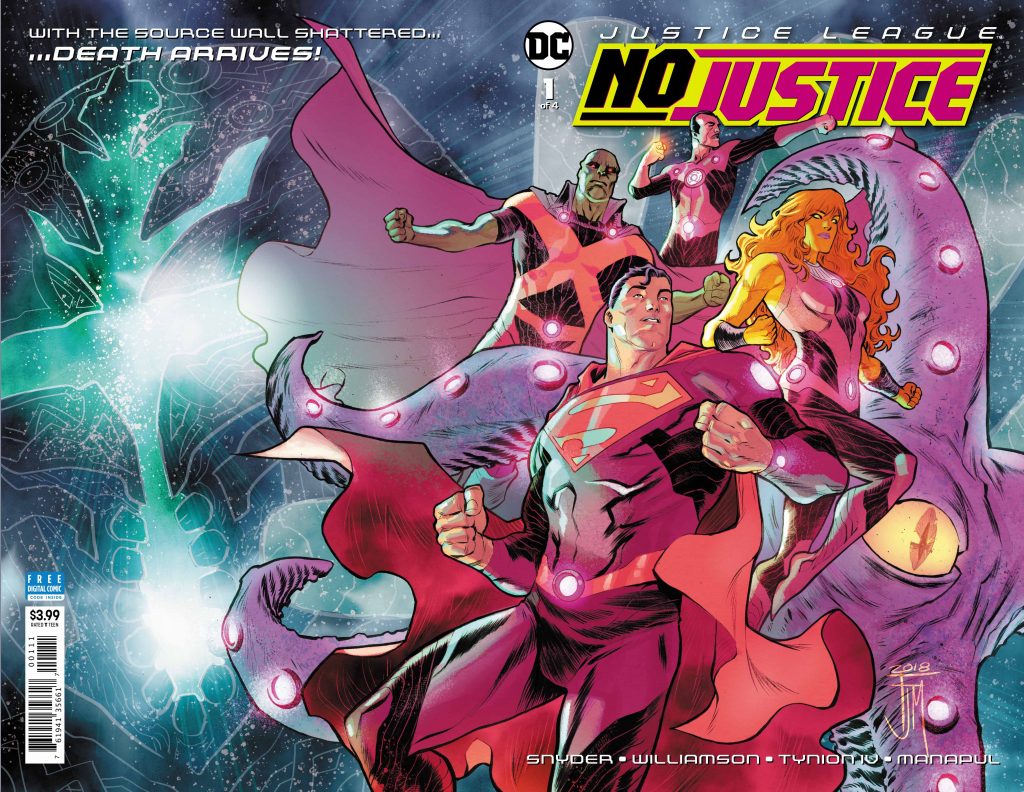 What makes the grandiose nature of the action and universal threat that is on display work in the first issue, however, is how Tynion IV, Williamson, and Snyder make responsibility take center stage. The chapter’s ground zero is the Source Wall, breached at the end of Synder’s Dark Nights: Metal event, unleashing all manner of threats upon the universe that the wall once kept at bay. As Green Lantern Guy Gardner says early on, this catastrophe lays at the Justice League’s feet, a result of attempting to fix Batman’s meddling in matters beyond his kin. While the nature of the crisis necessitates “all hands on deck” and leads to the League and other heroes partnering with villains, it’s also a reminder that the League painted itself into the corner it finds itself in. It’ll be nice to see if this thread will continue to be pulled later on in the No Justice event and in Snyder’s Justice League. 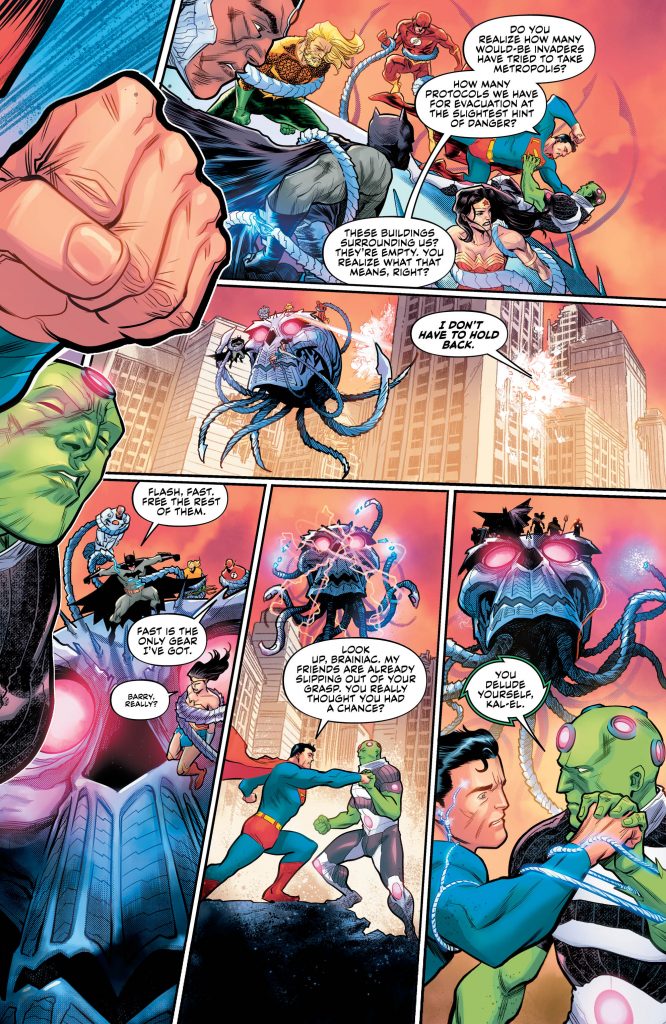 Beyond their culpability at unleashing chaos into the universe, Brainiac’s supposition that the League and other Earth heroes could be more effective if they put aside their differences with their adversaries is an intriguing one that hasn’t been explored too broadly in superhero comics. While heroes and villains switch allegiances often or work together temporarily for a story or two, Brainiac’s point is valid: if we could dispassionately disregard that with which we disagree, the universe could be better. It’s a question we ask ourselves often in our personal relationships and in how nations interact with one another. Tynion IV, Snyder, and Williamson are sure to show us how well it works when the idea is firing on all cylinders… and when the plan’s seams start to show. 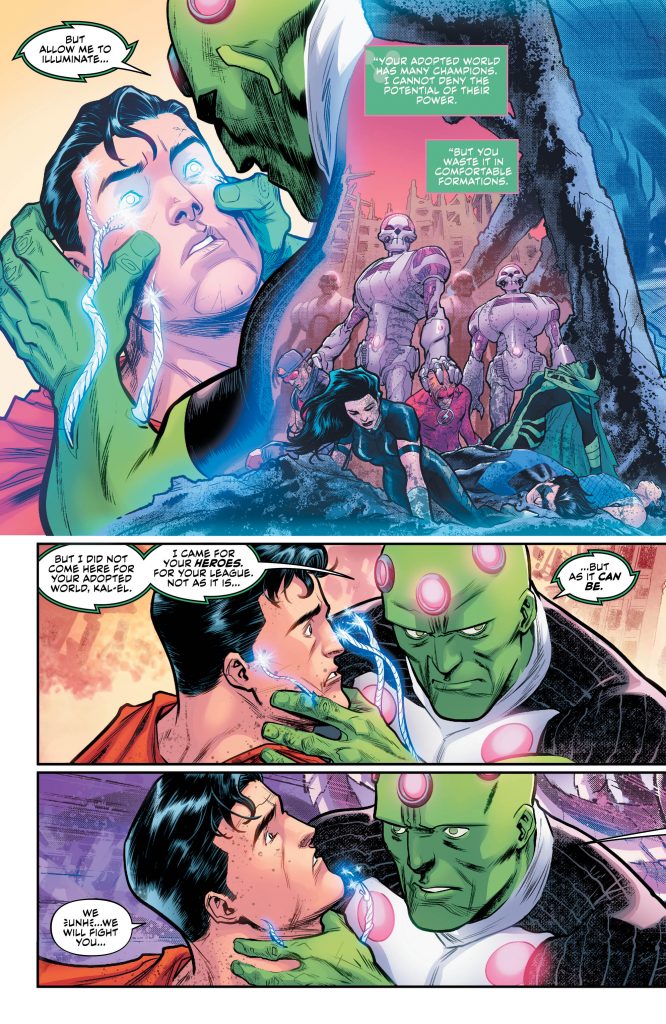 Manapul on board to show those team-ups and bombastic battles is a boon to the book. Manapul is no stranger to the DCU, working on books from The Flash to Detective Comics to Trinity, but this is the first time he’s had the chance to juggle so many characters at once, and he’s shown he’s more than up to the task. Displaying, as always, some of the cleanest linework seen in the comics medium, everything from the facial features he renders—Superman’s look of astonishment and dread at the surprise death at the end of the issue is perfect—to the grandeur he gives the portrayal of the Cosmic Gods—sells  every inch of this book. If the moving parts that the writers were given to Manapul’s capable hands, the book may not have worked as well otherwise.

The Justice League comic franchise has experienced an embarrassment of riches in creators and tight, character-defining stories worthy of its heroes. The team of No Justice has taken that baton and doesn’t look to be slowing down, offering the beginning of a larger-than-life epic that will stand tall with the iconic tales that came before.

Justice League: No Justice #1 is on sale now from DC Comics.

DARK NIGHTS: METAL left the DCU transformed in ways both terrifying and wondrous—and only the Justice League is strong enough to face the threats to come…or are they? Four giant beings comprised of the universe’s major energies—Mystery, Wonder, Wisdom and Entropy—who sustain their life force by devouring planets are on their way to destroy the planet of Colu. The only way to take down this unimaginable threat is for the superhero teams of Earth to forget everything they thought they knew and form new alliances.

What secrets of the cosmos will Superman, Martian Manhunter and Team Mystery discover? Will Zatanna, Wonder Woman and Team Wonder awaken alien magic they cannot put back to sleep? What can Harley Quinn possibly have to teach the rest of Team Wisdom? And most importantly…why the heck is Beast Boy on Team Entropy with Lobo and Batman? Find out all this and much more in the most exciting, bombastic event of summer 2018!

In this kickoff issue to the four-issue miniseries, after Brainiac systematically takes down all of Earth’s super-teams, the last thing the League expects is for him to ask for their help! Without their aid, his home planet and the universe are both doomed!

Review: JUSTICE LEAGUE: NO JUSTICE #1
The Justice League comic franchise has experienced an embarrassment of riches in creators and tight, character-defining stories worthy of its heroes. The team of No Justice has taken that baton and doesn’t look to be slowing down, offering the beginning of a larger-than-life epic that will stand tall with the iconic tales that came before.
9.5Overall Score
Reader Rating: (0 Votes)
0.0