“Justice League of America #1 is a proper introduction to the types of stories we’ve been promised in the Rebirth prologue, a book promising the bombast of we’ve come to expect from the Justice League franchise coupled with thoughtful allegories and messages layered underneath.” 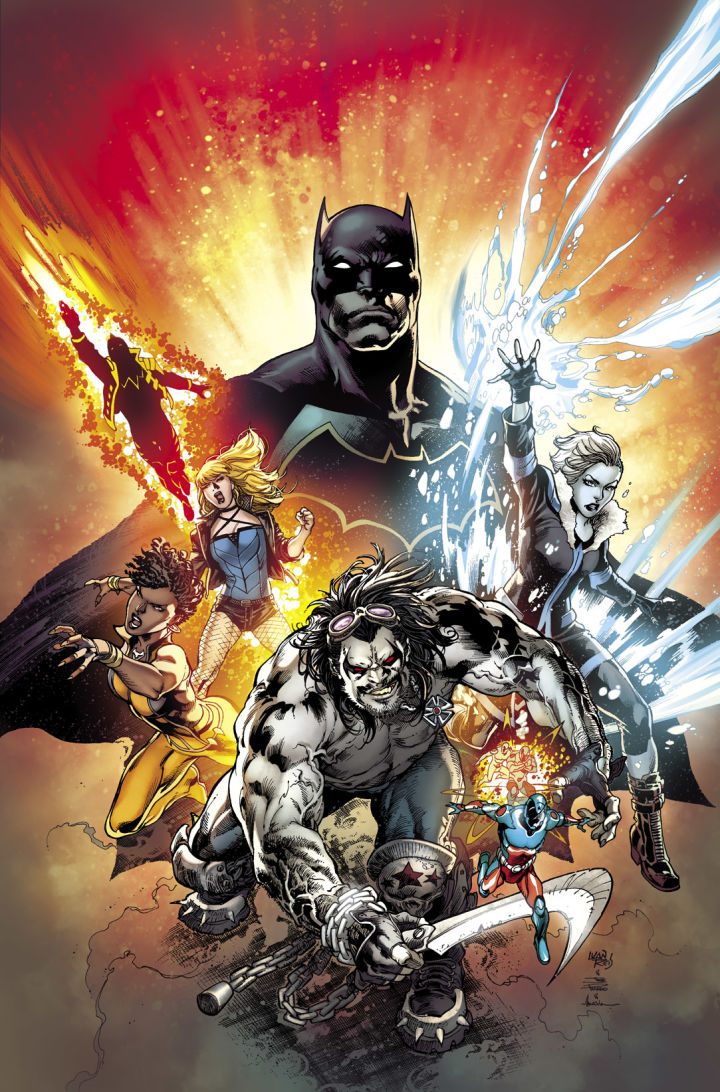 Comic books have a long tradition of throwing disparate, conflicting personalities together on a team book; look to the early years of The Avengers and the All-New, All-Different X-Men of the 1970s for some prime exemplars of this type of move done beautifully. The purpose of this angle is two-fold. Up front, reading about folks who are thick as thieves without any strife or discord can make for boring fare. Drama makes for engaging reading: Who will Batman bristle against this time? Why are Iron Man and Captain America having yet another skirmish?

However, and maybe more importantly, constructing a group of heroes who don’t always play nice with one another, despite their common goal of do-gooding, speaks more to everyday life and we experience the world. You’re not always going to be able to play nice with your coworkers, however much you strive to hold your tongue. Hell, you’re not always going to mesh with your friends and loved ones, for that matter. Life is messy with a constant cycle of conflict and resolution; the micro-interactions of Wonder Woman and Superman often reflect the macro-conflicts between heroes and would-be world conquerors. Such a set-up helps the readers connect to what they’re reading, making the experience more human.

Which is appropriate for what writer Steve Orlando and artist Ivan Reis are doing in Justice League of America #1, on sale now from DC Comics. Continuing with what the creative team set up in Justice League of America: Rebirth two weeks ago, JLA #1 follows Batman’s new Justice League squad as they make good on the Dark Knight’s mission as set up in Rebirth: showing humanity that they can be heroes just as much the cape-and-cowl set. The team Batman has assembled is certainly filled with human personalities—ranging from loud and robust to ill-at-ease and uncertain—making for bristling conversations and interactions of a less-than-friendly sort among some teammates. The Ray is still green in his superheroic career, tentative in his actions and looking for validation from his teammates, while Lobo pushes buttons and mocks the reformed-in-progress. It’s a “Captain America’s Kooky Quartet” for the 21st century.

But it’s much more than that. Orlando’s script shows why these characters that the Caped Crusader have chosen—Vixen, Black Canary, the Atom, Frost, Lobo, and The Ray—are the perfect alchemical mixture for Batman’s design. The Dark Knight seems to know that if he wants the people the JLA protects to be heroes after the team’s example, the group’s members can’t be gods. They have to be of the world and approachable. And that approachability comes in their fallibility. 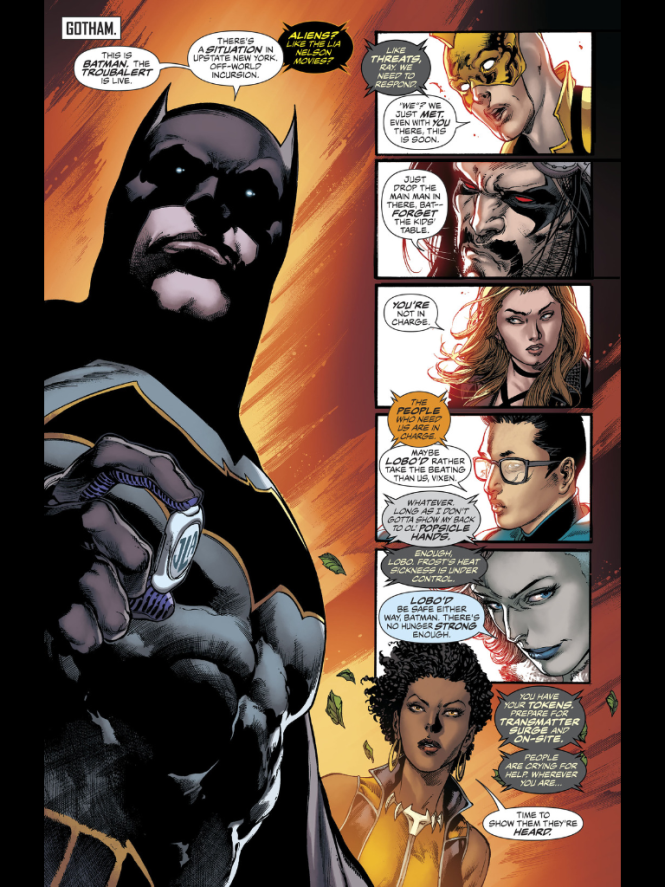 Orlando puts that fallibility of not just the League, but humanity as a whole, at center stage when he introduces Lord Havok and the Extremists as the first major threat the JLA must face down. Havok and his crew have come from a universe where liberty and freedom, in Havok’s words, destroyed society from within. Only through Havok’s slaughter of his fellow people did he “save” that world, and he’s coming to JLA’s universe to do the same.

Lord Havok’s words demonstrate that he’s the perfect foil to the Batman’s mission in JLA. Batman believes in the basic goodness of humanity and wants to set an example so that they have the tools and confidence to save themselves. Both Havok and Batman want to save the world, in their way; Havok just fails to believe that humans are capable of peace without being ruled and subjugated in the process. Despite Havok’s words, however, he believes in faith in the people despite their fallibility, fellowship over fear. [Check out the last two pages of the issue to see this in sharp detail, particularly in the Dark Knight’s last-ditch, dramatic move.]

Reis is no stranger to the DCU’s characters and that’s evident once again here. As they did in Justice League of America: Rebirth #1, everyone from Batman to Vixen to Lork Havok to the normal citizens in the background come alive under Reis’ hand. While his knowledge of composition and storytelling were very much on display in that Rebirth one-shot, Reis especially shines when throwing everything and the kitchen sink into his superhero throw-downs, and that’s especially at the forefront in JLA #1.

And while many artists can render well-choreographed melees, Reis brought just what this premiere issue needed: powerful heroes in their own right who didn’t necessarily know how to work as a team and, as a result, tripped over their feet in the process. That sort of planning, with so many moving parts to consider, most likely takes some reverse engineering as to how to make a fight look as though it’s gone horribly awry. And that’s the product and a hallmark of an artist who’s mastered his craft. It’s also an examplar of how in tandem Orlando and Reis are working to create such sequences that are executed seemingly effortlessly.

Justice League of America #1 is a proper introduction to the types of stories we’ve been promised in the Rebirth prologue, a book promising the bombast of we’ve come to expect from the Justice League franchise coupled with thoughtful allegories and messages layered underneath.

Justice League of America #1, written by Steve Orlando with Ivan Reis on art, is on sale now from DC Comics.

Meet the Extremists—self-proclaimed saviors from another Earth, they thirst for peace, prosperity and total submission to the will of their leader, Lord Havok! How can the newly assembled JLA stop this group of misguided maniacs before the Extremists unleash their own unique—not to mention dangerous!—brand of law and order on our chaotic world?

Review: JUSTICE LEAGUE OF AMERICA #1
Justice League of America #1 is a proper introduction to the types of stories we’ve been promised in the Rebirth prologue, a book promising the bombast of we’ve come to expect from the Justice League franchise coupled with thoughtful allegories and messages layered underneath.
9Overall Score
Reader Rating: (0 Votes)
0.0