“Klaus #1 imbues fresh magic into a legend that’s been told and told and told again. As Morrison has shown with similar larger-than-life characters such as the Man of Steel, however, he’s more than adept at making all that’s old and staid feel new once more.”

Everyone loves a good origin story, especially comic book readers. While fans might know the genesis of Spider-Man and the death of Bruce Wayne’s parents by heart, there’s a reason that creators over the years have revisited these tales time and again. The stories are simple, yet so rich in that simplicity that different angles can be explored in reexamining their underpinnings, bringing something new to the table each time. Of course, such treatment isn’t reserved merely for superheroes; religious and folkloric traditions have taken been told again and again throughout the years like a long-form game of telephone, each retelling of an event of mythic figure added to or reframed depending on the teller.

Santa Claus is one such character. Most of the wider world knows the tale of the ambassador of the holidays: Dude lives at the North Pole, regards children based on their behavior, and, on Christmas Eve, dispenses gifts to those children contingent on the “goodness” of said behavior. That the legend was based on a 4th century bishop, rich in generosity, is pretty much common knowledge, with pagan traditions and a dash of Christian lore sprinkled in over the years to augment the tale. Hell, even Coca-Cola got in on the act, as the red-suited fellar we usually see in our mind’s eye when we think of Santa was crafted by the soda company. 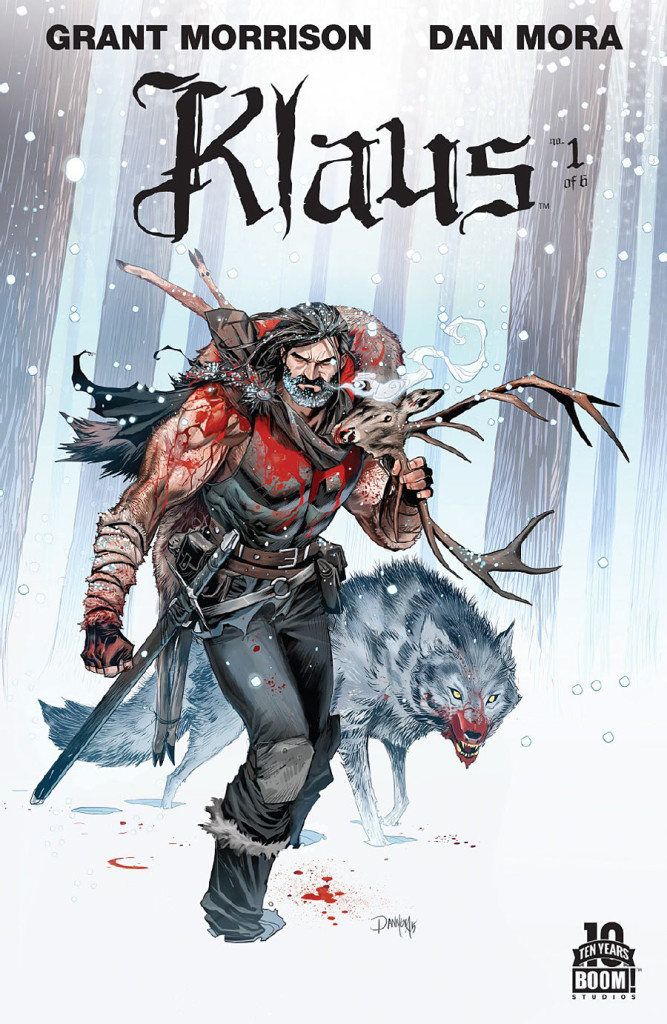 And yet, just as with Spider-Man and Batman, as long as the core of the Santa story prevails—a generous man pouring out that generosity during the Yuletide season—then the figure will persist despite whatever changes and tweaks are made to the particulars. In some cases, those adjustments can even reveal a facet to a well-worn story never considered before.

That’s why writer Grant Morrison, high-mage storyteller of the comic book world, is a perfect fit for tackling a different tact on the Santa tradition. In Klaus #1, the first part of a miniseries from BOOM! Studios by Morrison with art by Dan Mora, we see the beginnings of the tale of a nomadic man, the eponymous Klaus, who stumbles into the wintry town of Grimsvig with his wolf companion, only to find the place much more dour than he remembers. Instead, the town, overseen by Baron Magnus, forbids anyone, especially children, from partaking in any fun or mirth or enjoying any of the property of Grimsvig, as those actions are reserved for the Baron’s son and for him alone. When Klaus tries to rebel against the baron’s authority, he’s beaten for his trouble, left to skulk in the woods from the town’s guard. Despondent and alone, distraught about how to help the children, he’s visited by powers that might hold the key to his aims, but not in the way he expects. 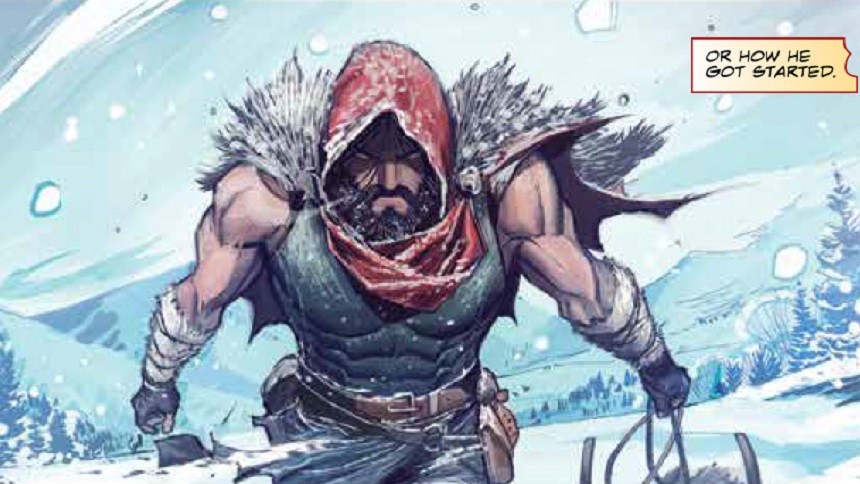 For a character as steeped in time and pop culture as Santa Claus, through imagining and reimagining, it’s hard to conceive what more can be done to spit-polish the concept without pulling completely away from what makes the figure of folklore work in the hearts and minds of those who know of him. However, Morrison has shaped a good part of his career on taking in the breadth and depth of the histories of giants—his runs on Batman and All-Star Superman, for example—and distilling what makes those characters work, while adding his own perspective to make those mythic men and women feel new.

Case in point: On the surface, some readers might dismiss the gruff and gritty take on Santa that Morrison presents as being anathema to the idea of the jolly giver of toys to good girls and boys. However, for a man to undertake the eternal, thankless task that Klaus eventually picks up, it would make sense that he would have to possess a steely resolve and strength to carry such a burden. As shown in Klaus, the Kris Kringle of lore is just that type of spirit, a Horatio Alger who presses on and cuts his own path. And that nomadic quality is also a wink to how we normally think of Santa: He belongs to no one nation or people, but instead is a man for all who would believe in him and his mission. 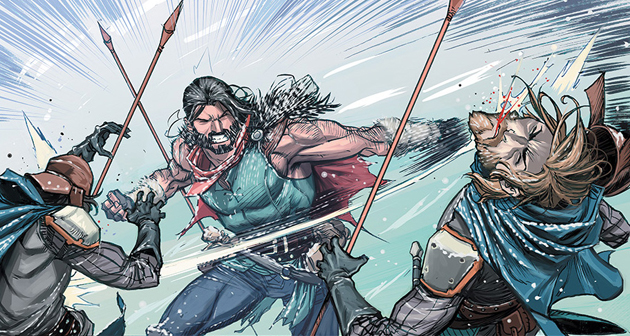 That nod to tradition in Klaus not only carries over to the traits of the future Santa, but also to the trappings we normally associate with the myth. He clearly doesn’t cotton to the idea that children aren’t being treated well and are deprived of joy, as shown in his confrontation with Lord Magnus’ men who would squash his protests. Further, we get a glimpse as to why Klaus would eventually bristle at the idea of naughty children, as the Lord’s son is a tyrant on par with Game of Thrones’ Joffrey, a young man who is never satisfied with the riches that he has. Morrison suggests here that Santa’s tradition of ignoring naughty children on Christmas Eve stems not just from how those young’uns act, but it is also a reproach of enabling parents and guardians who would let such behavior be left unchecked. Further, Klaus’ sadness at the turn of events in Grimsvig gives Morrison the opportunity to comment on how magic can enter one’s life if a person’s heart is pure and seeking justice, as we see when the nomad begins to play his jolly tune on his pipe. The gruffness and delicate nature of Klaus permeates not just his inner soul, but also the overall tone of the tale. 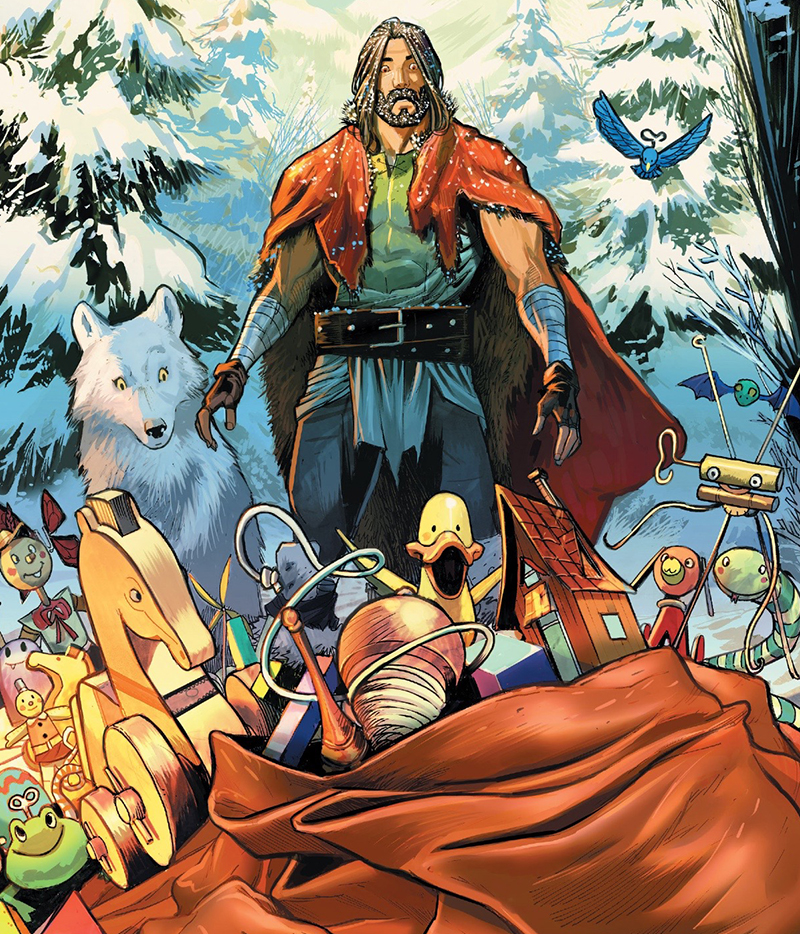 Klaus gets a surprise.

This dichotomous nature of the book’s narrative is kept in check by Mora’s phenomenal linework. While he grounds the alternately depressive and oppressive mood of the beginning of the tale with intricate penciling—from the stranger’s beard to the cobblestone of the streets—Mora clearly knows how to make negative space work to create a suffocating yet beautiful effect. The haunting snowscapes beyond the city walls echo the once peaceful serenity of Grimsvig before it fell to the Baron’s iron grip. However, those same snowscapes build tension within the story, their unmarred calmness giving readers pause and a hitch in their throats, wondering what will disrupt that stillness. When the stranger begins playing his music in the woods, though, is when the dynamism in Morrison’s script allow Mora to go wild, creating esoteric forms and psychedelic beings that make the forest truly feel like a place full of mysticism and wonders.

Klaus #1 imbues fresh magic into a legend that’s been told and told and told again. As Morrison has shown with similar larger-than-life characters such as the Man of Steel, however, he’s more than adept at making all that’s old and staid feel new once more.

Review: KLAUS #1
Klaus #1 imbues fresh magic into a legend that’s been told and told and told again. As Morrison has shown with similar larger-than-life characters such as the Man of Steel, however, he’s more than adept at making all that’s old and staid feel new once more.
9Overall Score
Reader Rating: (0 Votes)
0.0