That has been the refrain eeking into the pages and panels of writer Tom King, artist Mitch Gerads, and letterer Clay Cowles’ Mister Miracle from the beginning of the miniseries, which concludes today with issue #12. Darkseid is the tyrant god monarch of the planet Apokolips, who has thrown masses of troops and cannon fodder at the armies of New Genesis, led by the eponymous Mister Miracle, Scott Free—who happens to be Darkseid’s adopted son. Darkseid hopes to use the Anti-Life Equation to subdue and subjugated the entirety of existence. 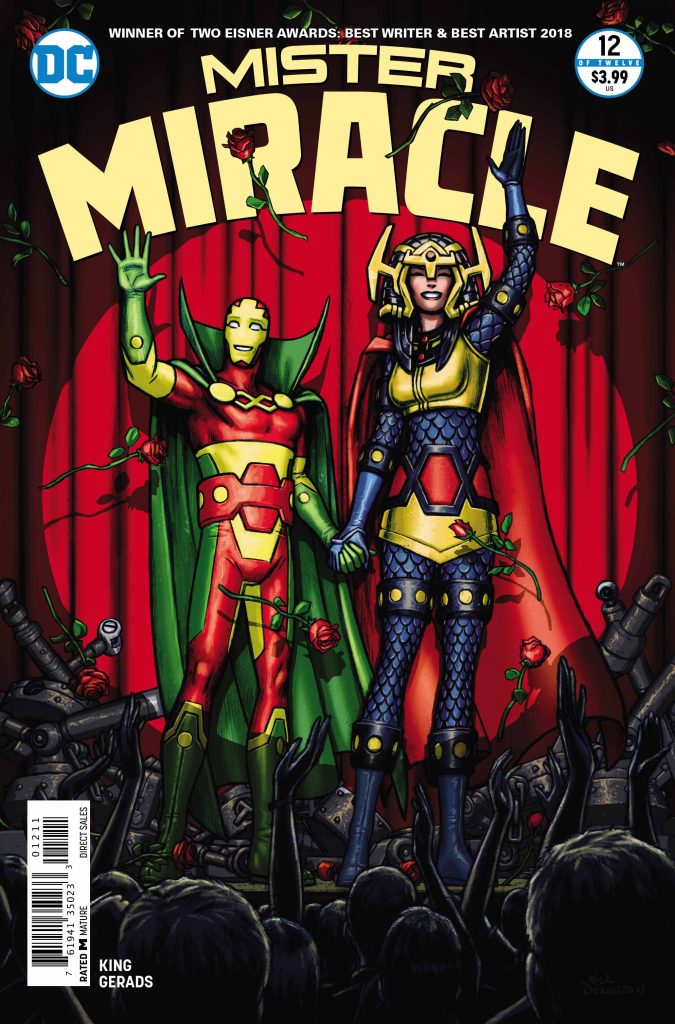 But, of course, “Darkseid is” does not only refer to the monster of Scott’s dreams, who Scott, the Greatest Escape Artist of Three Worlds, finally subdued and destroyed after the Lord of Apokolips dared to threaten Mister Miracle’s son. “Darkseid is” also can refer to the feeling of existence being for naught.

The idea that none of the toil of life is worth the trouble.

The nagging thought that life is not worth living.

To give in to oblivion. 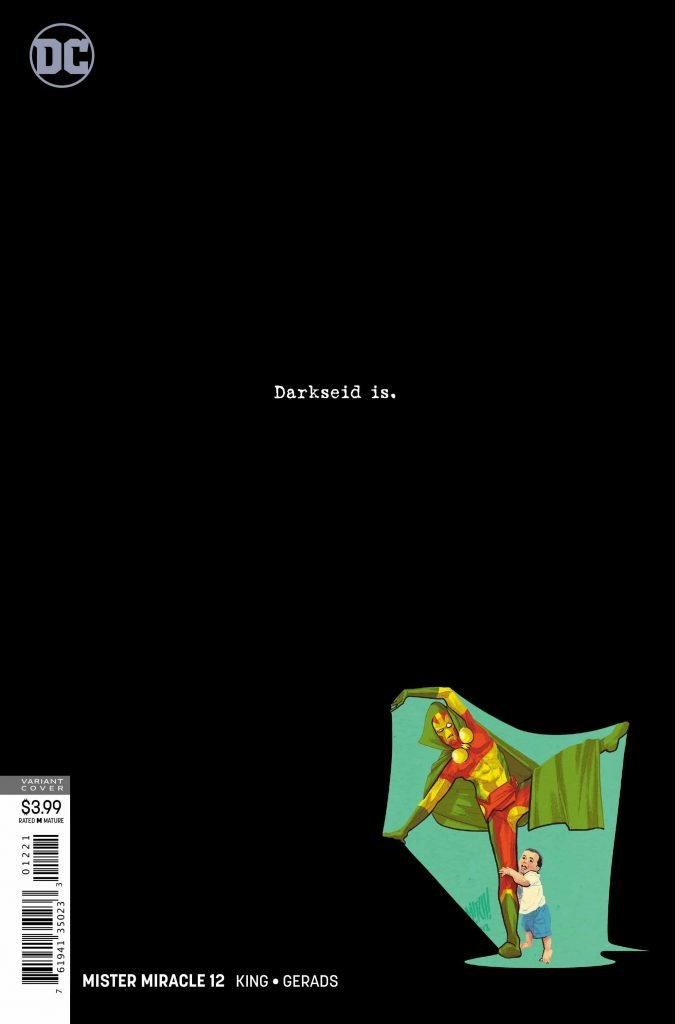 Those problems still taunt Scott at the beginning of issue #12, just as they did in the debut issue of the miniseries. In that first installment, Scott had slit his wrists, claiming he was attempting to escape the most inescapable trap: death itself. King, Gerads, and Cowles have hinted that may have not been the case, that Scott’s actions may have been an actual suicide attempt—something that his wife Barda calls him on eventually toward the end of the series.

The other question that has lingered since the start of Mister Miracle is whether Scott did indeed escape death, or if the good and bad he’s experienced—the slaughter of his fellow New Genesis countrymen and women, the birth of his child, the vanquishing of his father and stepfather—are all part of an afterlife from which he never left after cutting his wrists on his bathroom floor. This issue makes it more explicit than the others, with his friends and foes—from Darkseid to his hellish surrogate mother Granny Goodness to his dearly departed friend Oberon, all dead—appear before Scott to question whether what Scott thinks is real actually is, including his wife, son, and forthcoming second child. 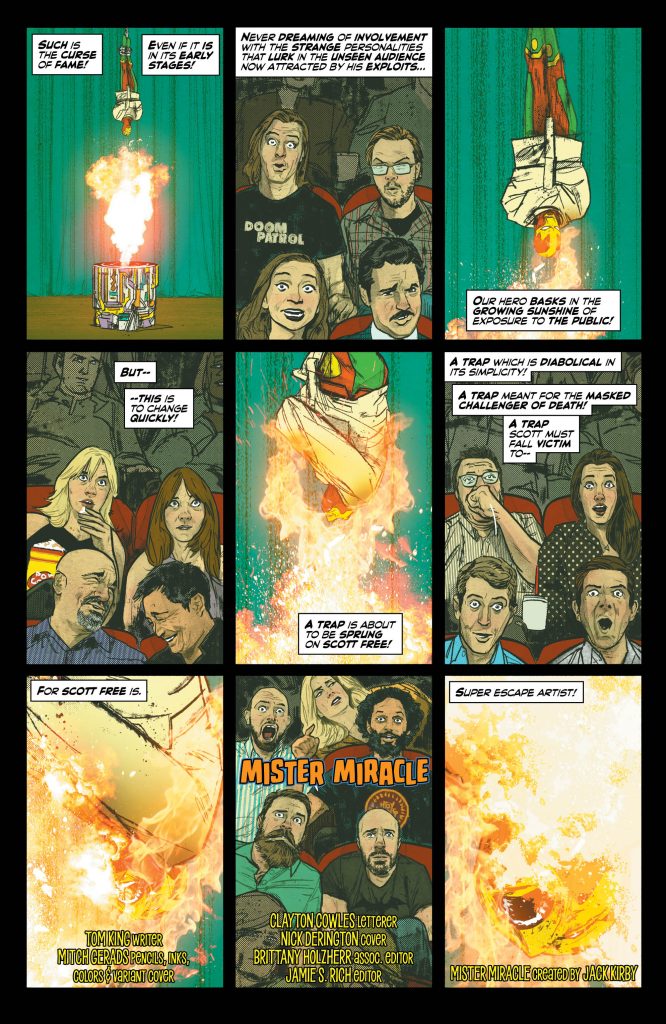 What Scott has to decide in this issue, however, is whether he’s willing to work on breaking the cycles that have weighed on his life: on letting his past define him, on his mistakes driving him to action through guilt, on letting others who think they know better about your life lead you by the nose and over a cliff of indecision and uncertainty.

As he did with The Omega Men, The Visions, and continues to do with his run on Batman, King works in despair like sculptors work in clay and marble. But this isn’t to say he doesn’t also work in hope. He allows readers to see the dirtiness and grit and realism of life so that when his characters do the work to pull themselves out of the mire, it’s that much more earned, a relief and a reward. 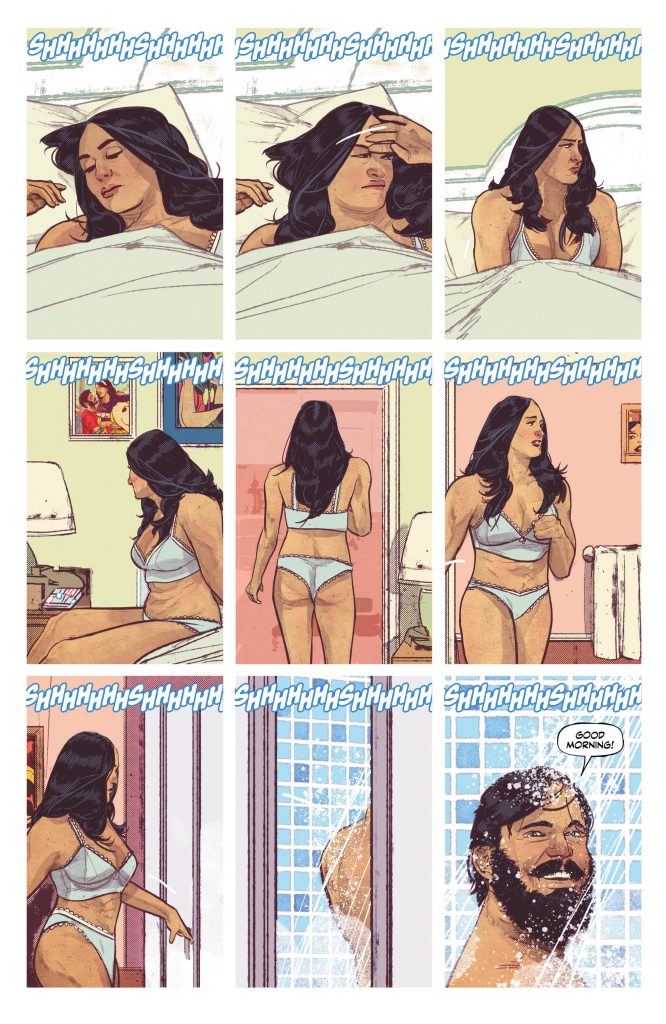 Spoiler alert: Scott isn’t made whole at the end of the Mister Miracle #12 and the miniseries’ conclusion. Life isn’t suddenly easy and calm and serene. That’s not how this works. But Scott maybe, just maybe, has a chance at a modicum of peace if he does the work of living instead of constant looking for an escape route.

Gerads sells this despair and hope in the masterful manner he has the entire series, alternating elevating the mundane and bringing down the divine to our level. Scott feels regal shopping for hotdogs in kicks and a T-shirt, while the maybe-spectre of his father—Highfather—feels almost painfully, disdainfully ordinary as he ill-advisdely pokes and prods the son he abandoned for his decisions. There’s an exhaustion to Scott; he has no time for cosmic codswaddle when he son needs to eat. And as Little Man Free eats his meal, red juice all over his face, King and Gerads both hint at the cycle of mistakes made by fathers and sons—and begs us to remember that not everything is dripping with meaning. Sometimes there is no metaphor, only life.

Cowles’ lettering paired with Gerads goes a long way to sell that dichotomy, with words alternating popping off the page and staying within word bubbles as the scene calls for. His lettering choices for huckster Funky Flashman’s dialogue are particularly inspired. 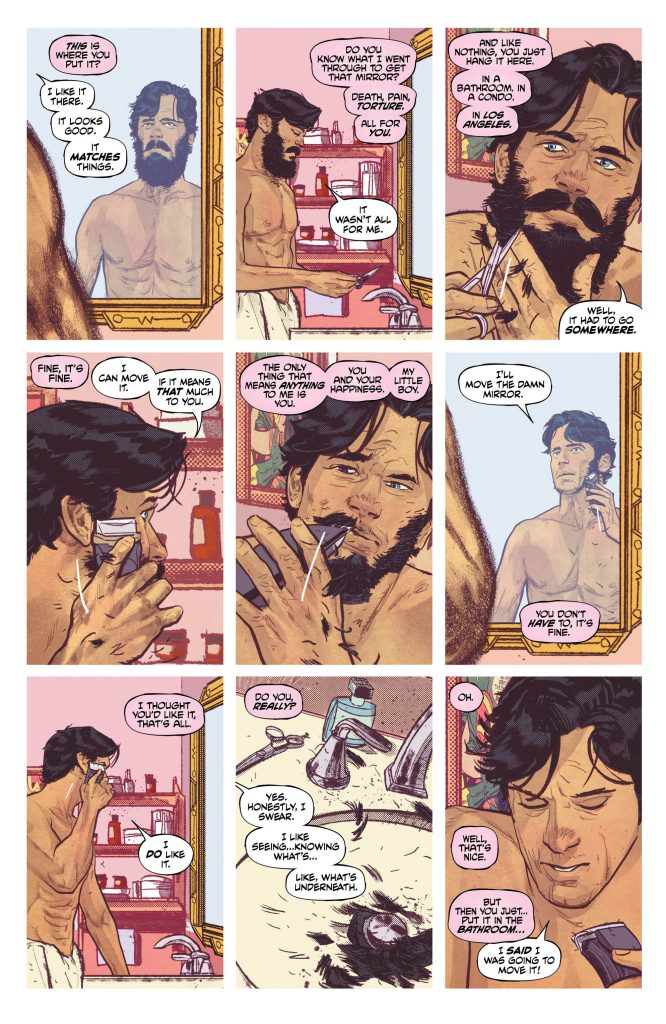 Mister Miracle is about family. It’s about growing up. It’s about finding purpose in a seemingly purposeless world. And it’s about refusing to give in to the darkness when it threatens to swallow you whole. And how King, Gerads, and Cowles craft these themes under the auspices of a cosmic superhero framework is why it stands tall as one of the best comic stories of not just 2018, but the last decade.

Perhaps “Darkseid is.” Perhaps the existential gnawing will always be on the perimeter of life. But Gerads and King have shown us that, on occasion, we can keep that gnawing at bay so Darkseid is not.

Mister Miracle #12 is on sale now from DC Comics.

It’ll be a miracle if you can get through this mind-bending conclusion with your sanity intact! After his epic battle with Darkseid, Scott Free sees life a whole new way: he’s the new Highfather of New Genesis, and he’s madly in love with his wife and child. But what if it’s all a lie? Did Mister Miracle really escape death way back in issue #1? No one really knows but Tom King and Mitch Gerads!