“For a woman trying to find her way in fandom, I think this book would be invaluable.”

The Fangirl’s Guide to the Galaxy

I’ve been interested in the notion of fandom for some time now. In fact, by the time 2010 rolled around and I wrote Comic Book Fanthropology, the notion of writing a book on the subject had been rolling around in my head for nearly a decade. There was such of dearth of commercial material at the time that I relied primarily on dense academic papers and anecdotes in tangental works. That’s changed significantly even in the five years since Fanthropology came out, and many more people are discussing the topic on its own merits. So it was with great interest that I came to Sam Maggs’ book The Fangirl’s Guide to the Galaxy. 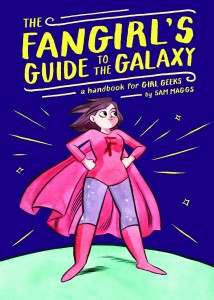 The notion of comics and science fiction fandoms being exclusively the domain of boys and men goes back generations. While women have pushed for more inclusion during that time, it finally came to a head in 2009 when the first Twilight movie panel was held at Comic-Con International and regular con-goers were surprised to see thousands of teenage girls at the show. Since that time, there’s been fairly public and often heated exchanges as some fans demand that their fandom remain devoid of anyone without a Y chromosome. That’s where Maggs’ book comes in.

Women are often challenged on their fannishness in ways that are sometimes overt and sometimes subtle. This can make it emotionally difficult for them to openly express their fannish interests, as they can fear reprisals, ranging from casual dismissal to blatant sexual harrassment. Maggs takes these concerns into consideration, and walks through any number of hurdles women may face and how to overcome them. She does this with a friendly, casual aplomb dropping references to dozens of comics, video games, and sci-fi shows and movies that her readers can directly relate to.

Further, she meets fans wherever they might be in their induction into fandom. She talks about basic terminology and net-speak they might encounter if they’re just stepping into things, and walks through a full checklist of items to go through if you’re cosplaying at a convention for the first time. And for those even more experienced, she has sections on dealing with trolls and unwanted behavior more generally. I know this area in particular is one in which even long-time activist fans still wrestle with.

For a woman trying to find her way in fandom, I think this book would be invaluable. But that’s not to say men can’t get something out of it as well. Many of Maggs’ ideas apply to both sexes equally but, more importantly, it can help shine a light on some of the issues that women in fandom face that men might not be aware of. Eliminating that ignorance can help make you a true ally instead of just a friend, and that can go a long way towards making fandom safe and enjoyable for everyone.

Which is the ideal all fandoms should strive for.

The Fangirl’s Guide to the Galaxy comes out on May 12 from Quirk Books.